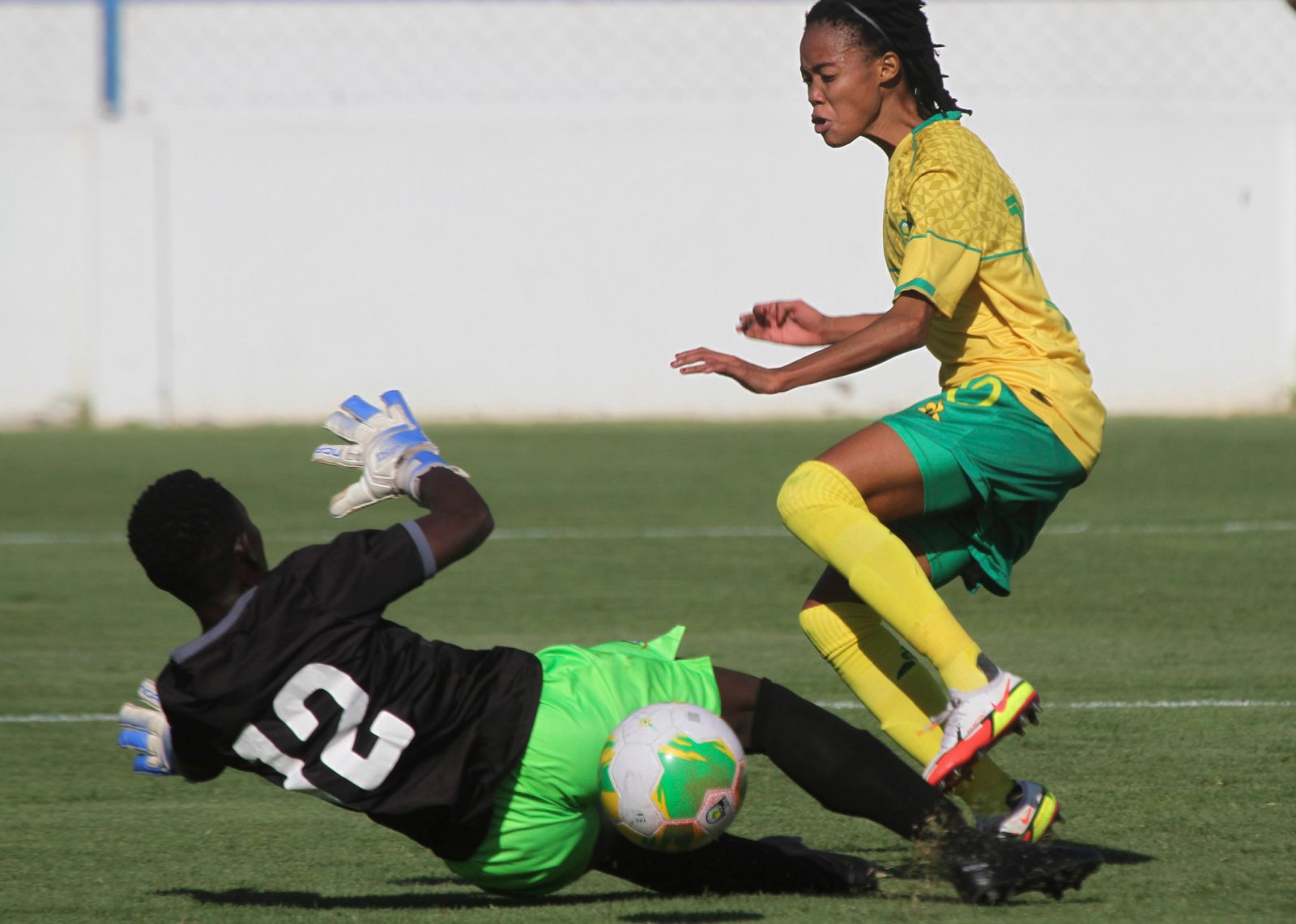 Linda Maserame Motlhalo of South Africa challenged by Eva Jose Costa of Mozambique during the 2022 Women's Africa Cup of Nations qualifier between Mozambique and South Africa in Maputo, Mozambique on 20 October 2021. (Photo: BackpagePix)

South Africa kicked off their qualification run for the Africa Women’s Cup of Nations with an emphatic 7-0 thumping of Mozambique in the first of two legs — a result which greatly pleased coach Desiree Ellis.

Banyana Banyana coach Desiree Ellis lavished praise on her team after a clinical showing in their first leg of their Africa Women’s Cup of Nations qualifier against Mozambique in Maputo on Wednesday afternoon.

The South Africans ran riot on the day, trouncing the home nation 7-0 in a dominant performance which saw Linda Motlhalo and Gabriela Salgado net a breach each, with captain Janine van Wyk scoring a long-range scorcher.

“We knew we needed to start well. We said that we needed to be positive and get a good result here, so we take the pressure off ourselves going back to South Africa,” said Ellis.

“We were so good on the ball. In that way, we opened them up. I think we hit the post about five times, and we had two players in Gaby and Linda who could’ve [scored a hat-trick and] got the match ball. We were really solid… By halftime, we were 3-0 up, and the tie was effectively over. Our movement off the ball, our passing, was better — much better. We controlled every aspect of the game”

Banyana bombed out in the semifinals of the regional Cosafa Women’s Championship after losing out to Malawi due to what coach Ellis termed “criminal defending” and complacency a week ago.

It was the first time in the competition’s history that the South Africans had failed to reach the final. That semifinal loss also denied South Africa a shot at a record-extending fifth consecutive Cosafa Cup success.

Against Mozambique, Banyana had no such problems, with Ellis saying her side “owed South Africa a good performance” following the Cosafa Cup disappointment.

The 58-year-old, who takes pride in the side’s defensive abilities as much as their attacking prowess, was pleased that despite rampaging in front of goal, they managed to keep the door shut at the back as well.

“If you look back at the Cosafa Cup, we were not fantastic [in defence]. We don’t want to make any excuses, but there was a lot of fatigue setting in as well. But today it was a really solid performance at the back,” Ellis said.

“We always say that if we keep a clean sheet, we will always create. And we created so many opportunities, which resulted in the seven goals, as well as five hitting the post… The players were really fantastic.”

The return leg will be played in Soweto at the Dobsonville stadium on Tuesday, 26 October.

In the likely event that Banyana ease past their opponents in the second leg, they will face Algeria or Sudan in the third and final qualifying round. The winner of that tie will then be one of the 12 teams which will duke it out for continental glory in Morocco between July 2022. DM