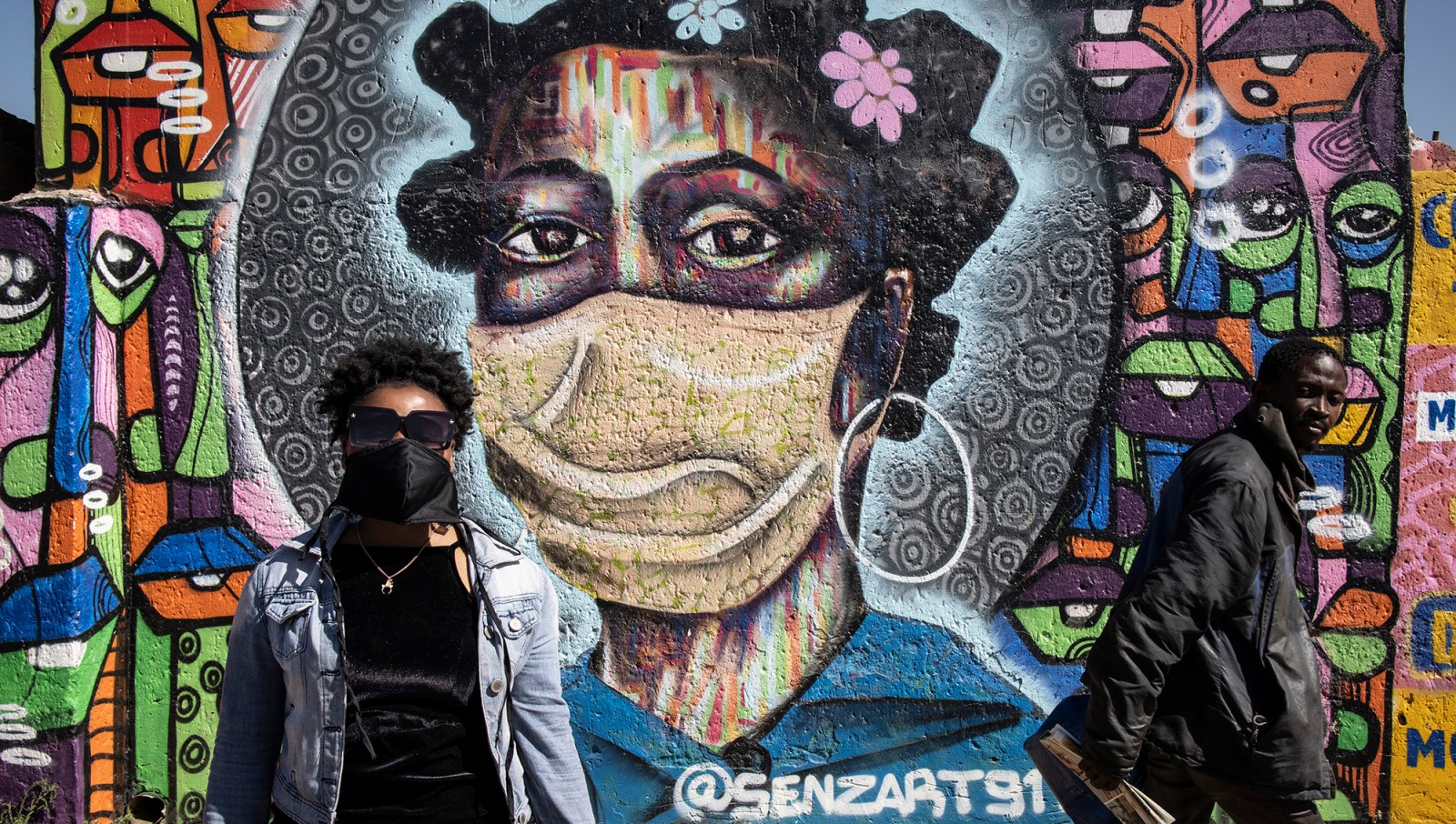 A Soweto resident in front of a mural informing people about the dangers of the Covid-19 pandemic. (Photo: EPA-EFE / Kim Ludbrook) 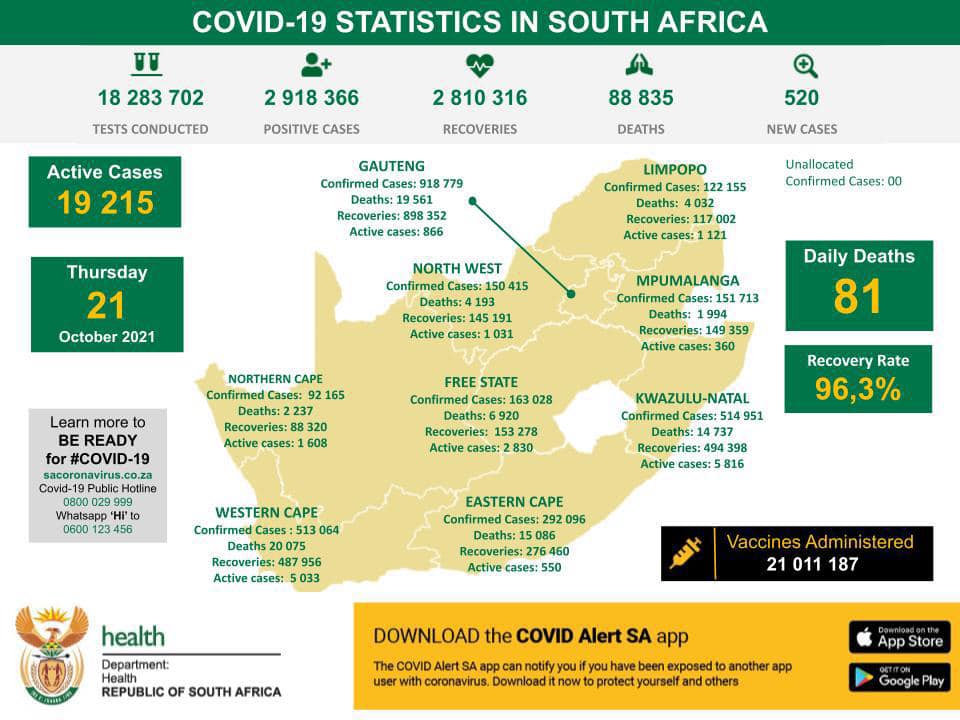 Pfizer and BioNTech said a large study showed a booster shot of their Covid vaccine restored full protection, bolstering the case for administering a third dose more widely. An advisory panel of the US Centers for Disease Control and Prevention is discussing additional doses of the Moderna and Johnson & Johnson vaccines.

The UK reported the most new cases since July.

The Serum Institute of India, the world’s largest vaccine manufacturer, said it will probably restart exports for the Covax global sharing initiative by early November, after India reached a milestone in its immunisation campaign.

Florida Governor Ron DeSantis said he’ll be calling back the Republican-dominated state legislature to take action against employer Covid-19 vaccine mandates. The goal is to block employers from firing workers over vaccination status, he said on Thursday.

“We want to make sure that individuals in Florida have their livelihoods and their jobs protected,” DeSantis said in Clearwater, Florida.

DeSantis and Texas Governor Greg Abbott are the most prominent Republican state leaders seeking to buck President Joe Biden and blunt employer vaccine mandates in the US.

UK reports most cases since July

The UK, already under pressure to reimpose restrictions, reported 52,000 positive Covid cases on Thursday — the most since 17 July.

Hospitalisations crossed 8,000, an increase of more than 1,000 from a week earlier. A strong vaccine roll-out means daily deaths still remain relatively low compared with more than 1,800 recorded at the beginning of this year.

High- and upper-middle-income countries have now distributed almost half as many booster shots as the total number of vaccines administered in low-income countries, WHO Director-General Tedros Adhanom Ghebreyesus said at a media briefing on Thursday. G20 countries have pledged to donate 1.2 billion vaccine doses to Covax, the global programme set up to equitably distribute vaccines, and 150 million have been delivered.

“For most donations, there’s no timeline — we don’t know what’s coming and when,” Adhanom Ghebreyesus said. “We can’t have equity without transparency.”

Roughly 500 million vaccine doses will be produced between now and the G20 meeting at the end of the month, he said. That’s the number of additional doses needed to achieve the WHO’s target of inoculating 40% of the population of every country by the end of the year.

Some 82 countries are at risk of missing that target: Three out of four don’t have enough supply, while the others have limitations in their ability to absorb vaccines.

Royal Air Maroc said in a statement that it was doing so “upon decisions of national authorities and following the pandemic situation”. It also suspended flights to Russia earlier this month.

That’s more than a previous plan to allow arrivals from an initial 10 nations as many countries including Indonesia, Malaysia and Australia have announced the same strategy, Prayuth said.

Israel also announced that foreign nationals who have got full dosing regimens of the Pfizer, Moderna, AstraZeneca, Johnson & Johnson, Sinopharm and Sinovac vaccines will be allowed to enter from 1 November.

A panel of experts who advise the US Centers for Disease Control and Prevention is meeting on Thursday to discuss booster shots for Covid-19 vaccines made by Moderna and Johnson & Johnson.

The Food and Drug Administration said on Wednesday that Moderna vaccine recipients of 65 and older can get a third shot, as can other adults at high risk of severe Covid, at least six months after their initial inoculation. The agency also cleared J&J boosters for people 18 and older who got the single-shot vaccine at least two months ago.

India will likely restart Covid-19 vaccine exports to the Covax global sharing body by the end of this month or early November, the head of the world’s largest vaccine-maker said, citing boosted production and built up stockpiles after the country crossed a key milestone in its immunisation campaign on Thursday.

Initially, only “very small volumes” of about 20 million doses a month would probably be shipped out until the end of the year, Adar Poonawalla, the chief executive officer of the Serum Institute of India said in an interview, adding that number could then be raised “significantly” from January if India hits vaccination targets and other local manufacturers manage to scale up.

Pfizer and BioNTech said a booster shot of their Covid-19 vaccine restored full protection in a large study.

A booster was 95.6% effective against symptomatic Covid in the study, which tracked 10,000 people aged 16 and older, the companies said on Thursday. The data may help guide regulators trying to decide how widely to use boosters, as the fast-spreading Delta variant drives infection rates up.

Separate research by Israel’s Clalit Research Institute and Harvard University showed adolescents who receive two doses of the Pfizer-BioNTech vaccine have a much lower risk of contracting symptomatic Covid-19, with the risk of infection dropping by 90%.

Moscow will implement its harshest lockdown since the early days of the pandemic, last year, as Mayor Sergei Sobyanin said that the virus situation was developing according to the “worst-case scenario”.

Most shops and businesses except for essential services will shut down from 28 October to 7 November, while schools and kindergartens will be placed on vacation, according to Sobyanin.

The restrictions are more severe than the nationwide non-working days ordered by President Vladimir Putin on Wednesday. Russia posted record numbers of new infections and deaths on Thursday amid a surge in cases unimpeded by low vaccination levels.

Tokyo is set to roll back restrictions that limited the operating hours and alcohol service of bars and eateries from Monday, as coronavirus cases drop nationwide and authorities look to open more parts of the economy.

Daily recorded Covid-19 cases in Tokyo have dropped to double digits from 9 October after hitting more than 5,000 for several days in August during a wave powered by the Delta variant.

Indonesia is tightening air travel measures to ensure that an anticipated jump in the number of passengers before year-end holidays won’t lead to a resurgence in infections.

Airlines must allocate dedicated seats for any passengers who show symptoms during the flight, even when they have tested negative for the virus before departure, according to Covid-19 task force spokesman Wiku Adisasmito.

Ukraine reported a record 22,415 new daily infections and 546 Covid deaths. Hospitalisations and the number of Covid patients needing intensive care are increasing, with almost 90% of hospital beds occupied in some regions. The government has no plans for a full lockdown, though access to places of business and public services is available only to those vaccinated or recently tested.

China reported 20 local infections on Thursday following a flare-up in the northwestern provinces, with cases spreading across the country to areas including Beijing. At least eight provinces have reported infections in the past week, fuelling concerns that China could see yet another widespread outbreak.

Lanzhou, the capital of northwestern province Gansu, shut down schools on Thursday after a handful of cases were detected. Local authorities also closed entertainment venues, conferences and scenic spots, and residents were asked not to leave the city unless necessary. Many cases reported in other provinces were linked to Gansu.