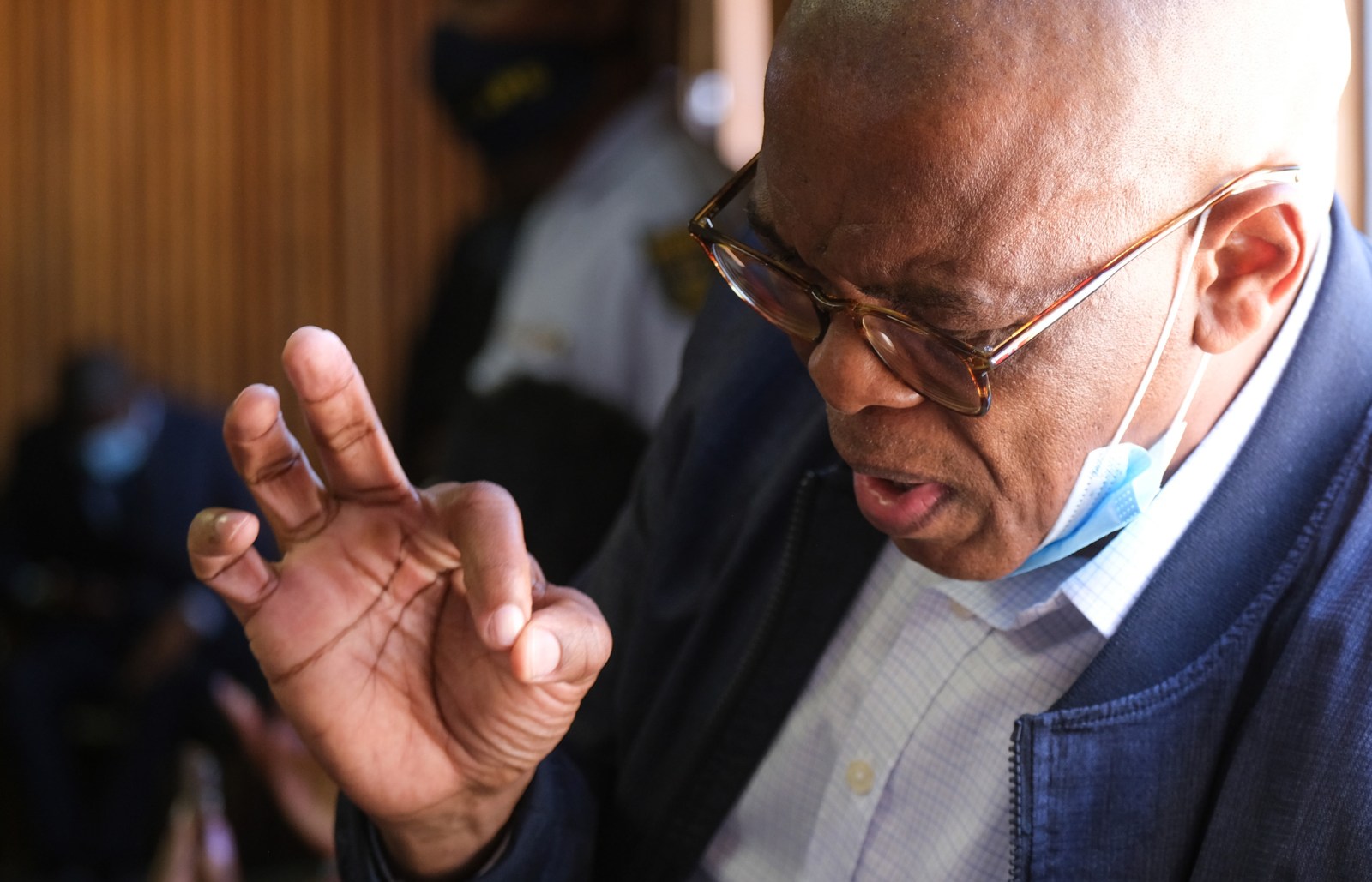 Former premier of the Free State and suspended ANC Secretary-General Ace Magashule and 15 other co-accused appeared in the High Court in Bloemfontein in connection with a R255m asbestos eradication tender. (Photo: Lihlumelo Toyana)

Crowds do not represent an election victory, the ANC’s suspended secretary-general Ace Magashule has warned after President Cyril Ramaphosa’s well-attended two-day campaign in the Free State.

Official social media pictures of ANC local government election campaign events addressed by President Cyril Ramaphosa show cheering crowds out in near lockdown-defying numbers to listen to him. (Officially only 2,000 people are allowed, but unofficially, nobody’s counting during brief rallies from the back of a party campaign truck. The Covid-19 infection rate is low.)

One of Ramaphosa’s main detractors in the party, Ace Magashule, has been out of the official ANC spotlight due to his suspension conditions, but says he’s still been campaigning in his branch. But he’s worried when asked whether the ANC will manage above 50% of the vote in the provincial capital.

“It’s tough here. I think Mangaung is tough,” he told Daily Maverick in an interview before a brief pre-trial conference and postponement in his corruption case on Tuesday morning.

The party managed a 54% share of the vote in 2016, but that represented a drop of 10 percentage points — mirroring its recent challenges in other metros. If another drop of this magnitude happens again on 1 November, the ANC would have to scramble for allies from among the myriad smaller parties that splintered off from it in disgruntlement in recent years.

It’s hard to tell this time around because people aren’t as honest about their party choices as they used to be, Magashule said.

“The problem with the vote is that the vote is always secret. When you campaign, you see a lot of people. For example, in the past, you see huge crowds supporting the EFF, but they did not vote EFF in the by-elections.”

He said a lot of people are undecided this year, and they go to different political meetings.

“Even people who attend ANC meetings, when there’s another political party coming into their area, they do attend [that one],” he said. “Rallies don’t actually show your support. Your support will be shown when people put their vote.”

Ramaphosa, on Tuesday night at the party’s “roll call” event in Alberton, remarked that the ANC was received by “thousands and thousands of people” at recent campaign events addressed by him, and this was proof of how people love the ANC. He needs the ANC to do well in these elections because, among other reasons, this would go a long way to securing his bid for a second term ahead of the ANC’s electoral conference in December next year.

The figures in the Free State are not encouraging for the party. Magashule says only about 50,000 people came out to register during last month’s voter registration drive. To be more precise, the figure was 45,600, of which just over 7,600 were new registrations. Just under half of these new voters are first-time voters. The eligible voter population in the province totals almost 1.9 million (according to a 2018 estimate) and 1.4 million were registered before. The recent registration drive did not therefore yield a massive success.

Leadership squabbles might have had something to do with this, Magashule said. “The fighting, the factions, [they] always demoralise society in general, and that’s why even the president said when the ANC’s divided, society becomes divided.”

The uncertainty over the election date and the pandemic means that electioneering didn’t start as early as it usually does.

“People did not come out. There wasn’t enthusiasm at all… because you can say [it is] because of Covid and our campaign started very late, and maybe it’s Covid conditions, but we haven’t done a lot.”

A low number of voter registrations could point to a low turnout on election day, a scenario that usually benefits opposition parties like the DA.

Asked whether his not being on a platform with Ramaphosa in the Free State would harm the party’s electoral prospects in the province, Magashule said: “I wish it shouldn’t. I don’t wish it, because who else knows what life can be without the ANC?”

Some voters interviewed in the Free State on the sidelines of Ramaphosa’s campaign trail have expressed their dislike of Magashule, and said they believed he was involved in the graft which made their lives more difficult.

It’s also true that Magashule still has a support base in the province, and some of these supporters might be trying to undermine the ANC’s election campaign because of feelings that they are losing out.

Magashule confirmed that a number of ANC members who did not make it as ANC candidates had registered as independent candidates.

“I definitely know that there are some individuals who are members of the ANC who were selected by communities and some people changed them and put in their own people,” Magashule said. “If you were not decided by the community, then I think the ANC is going to be hurt.”

This is a reference to the ANC’s method of choosing councillor candidates at community meetings which are not restricted to only ANC members.

On Ramaphosa’s promises that the ANC would renew itself, Magashule said it’s been tough, and ambiguously added: “The research worldwide shows that sometimes you can’t be in power forever. If we are in power then maybe we are in a unique situation.”

There’s a “lot of young blood” in the party, Magashule said. He ruled out the possibility of starting a new party if his current exclusion from mainstream ANC events continues. “It doesn’t help,” he said. “It doesn’t help.”

Magashule believes that the corruption charges brought against him and 15 co-accused in relation to the R255-million asbestos eradication tender that was awarded during his time as premier were mainly politically inspired.

He said the postponements are wasting his time. It’s been almost a year since he was first charged in the case and about five months since the party’s leadership forced him to step down — effectively sidelining him from the ANC’s mainstream activities.

Still, he is planning something. “One of these days you will see an event. I will invite you,” he said. “It will be one of the huge events.” DM