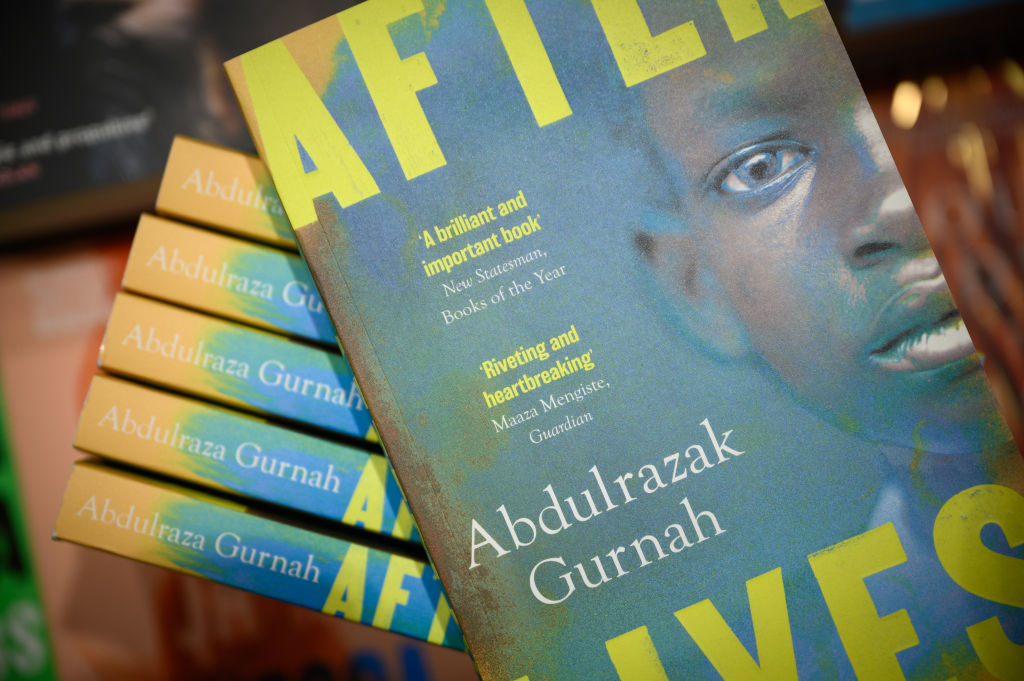 LONDON, ENGLAND - OCTOBER 07: In this photo illustration, copies of "After Lives" by the winner of the 2021 Nobel Prize for Literature Abdulrazak Gurnah are seen in a bookstore on October 07, 2021 in London, England. Mr Gurnah, who was born in Tanzania and lives in England, is the author of 10 novels. Upon issuing the award, the Swedish Academy said Mr Gurnah's work offered "uncompromising and compassionate penetration of the effects of colonialism." (Photo by Leon Neal/Getty Images)

For those of us who have read and reread, taught, and written about the fiction of Abdulrazak Gurnah, the Nobel Prize in Literature committee has confirmed what we knew all along. His superb writing deserves much wider recognition and readership.

Gurnah was born in Zanzibar, the archipelago off the Tanzanian coast, in 1948. Then still a British Protectorate, Zanzibar gained independence in December 1963, only to be thrown into the turmoil and violence of the Zanzibar Revolution of January 1964. These are historical events to which he returns in his fiction repeatedly.

He left for the UK in 1967 and has lived there ever since, except for a short teaching stint at Bayero University Kano in Nigeria in the 1980s. He taught in the English department at the University of Kent in Canterbury until his recent retirement.

Even though he has lived most of life in England, all his novels – except for Dottie (1990), which is set entirely in the UK – are set either fully or partially on the Eastern African Swahili Coast or in Zanzibar. To date he has published ten immensely readable novels and many short stories. These are written in clean and uncluttered prose. It makes him a master storyteller, captivatingly drawing the reader into the experiences and vivid lifeworlds of the characters depicted.

The work of the imagination to follow the storyteller’s attention creates connections that in their intangibility might seem elusive. And yet any reader will know these to be powerful and potentially transformative. As Ben Okri, a Nigerian writer, reminds us, such threads, which interweave stories and life, are deeply significant. This is because stories “can infect a system, or illuminate a world”. The ambiguity in Okri’s description of the effect of stories captures the way in which stories potentially open up the world and contest narratives that circumscribe and preclude mutuality. It also talks to the danger of stories when they participate in and serve as justification for structures of domination, exclusion and violence.

Gurnah, the storyteller, probes the efficacy of stories to connect people and geographies. Yet at the same time he is acutely attentive to the divisive nature of stories of certainty: of colonial domination, of patriarchal scripts, of racism, of xenophobia towards strangers from elsewhere. His work points to the way in which such certainties furnish people with a belief in the rightness of the violence they wreak on others, in the destruction of other people’s lives which they deem to matter less than their own.

Instead, Gurnah’s work asks the reader to consider stories as provisional accounts that cannot claim closure or complete knowledge. Ambiguity, multiple viewpoints of the same events, complex focalisation, self-reflexive irony and narrative wit are some of the features of his writing. They make his writing so incredibly compelling. It elides narrative certainty. The narrative mode is often oblique. Perhaps we can imagine it like this, or perhaps it happened otherwise. This mode is particularly apt to illuminate the itinerant lives of people who find themselves on the move and who do not seem to belong anywhere.

Migration and other forms of displacement, as Gurnah’s stories suggest, are common occurrences in Africa and across the globe. Therefore, it is important to see others in relation to ourselves, to perceive their right of abode even if they cannot claim national belonging. However, it is precisely the humanity of the stranger that is at stake once the status of citizenship is in question. Hospitality is revealed as conditional in the current hostile immigration climate. The asylum seeker, the refugee and the migrant are hardly afforded the dignity which the recognition of a common humanity would demand.

It is this refusal to recognise the humanity of the other and its terrible consequences that Gurnah’s stories explore in detail. He crafts carefully delineated juxtapositions between hostile, implacable environments in which his characters find themselves with little room to manoeuvre, and pockets of hospitality that gesture towards alternative social imaginaries where kindness and joie de vivre become possible.

In contrast to an essentialist view of a citizen as someone who is described in terms of appearance or ancestry, Gurnah sets the complexity of centuries of intermingling along the East African shores of the Indian Ocean. In this way his stories question ideas of purity and difference. They emphasise the cultural and linguistic heterogeneity of East African coastal regions and their place within the continent, the Indian Ocean world, and the globe in order to stress a common humanity.

Across his oeuvre, which traverses settings in Zanzibar, Dar es Salaam, Bagamoyo, Mombasa, Lake Tanganyika, Nairobi, Muscat, Bahrain and several locales in England, Gurnah traces a long history of transnational and transoceanic movements. His work references the Eastern African slave trade and indenture, German and British colonial oppression and less legible but equally destructive forms of social exclusion to do with economic precarity and migration. While his characters are often caught in violent and unequal plots not of their own making and beyond their control – since Gurnah’s stories tend to focus on people whose lives are deemed insignificant and small – his empathetic storytelling subtly points to the importance of social connections, however unexpected, that offer reassurance and warmth.

In this way, his novels also cautiously celebrate the polyglot cosmopolitanisms and generous forms of accommodation that emerged on the Swahili coast within broader structures of ambivalent encounter in the monsoon trade and imperial conquest. In a passage in By the Sea, Gurnah’s sixth novel, published in 2001, seven-year-old Saleh Omar, one of the protagonists and narrators, describes his first encounter with a map of an Africa embedded in the wider world of the Indian Ocean:

As [the teacher’s] story developed, he began to draw a map on the blackboard with a piece of white chalk: the coast of North Africa which then bulged out and tucked in and then slid down to the Cape of Good Hope. As he drew, he spoke, naming places, sometimes in full sometimes in passing. Sinuously north to the jut of the Ruvuma delta, the cusp of our stretch of coast, the Horn of Africa, then the Red Sea coast to Suez, the Arabian peninsula, the Persian Gulf, India, the Malay peninsula and then all the way to China. He stopped there and smiled.

This moment of the unbroken chalk line is pivotal, not just in relation to this particular novel, but perhaps to Gurnah’s oeuvre as a whole. It makes visible the ocean on which so many of his stories float. And I suspect that this teacher’s smile is also the soryteller’s. It is the subtle humour which suffuses his writing that give his stories a lightness of touch, despite the harrowing aspects of the narratives. It contributes enormously to the pleasure of reading.

There is the acerbic sarcasm which exposes racial aggression and renders it absurd. And there is the self-deprecating humour of the migrant in the face of an immovable and indifferent environment, which staves off self-pity and sets in motion processes of disalienation. The dry wit of the narratives allows Gurnah to forge a bond with readers, who come to appreciate it as a mode of interaction that can liquefy ossified social categories by opening up spaces of irony and ambiguity and remind us of the fragility of the human condition we all share. DM/ML

Tina Steiner is an Associate Professor in the English Department at Stellenbosch University.