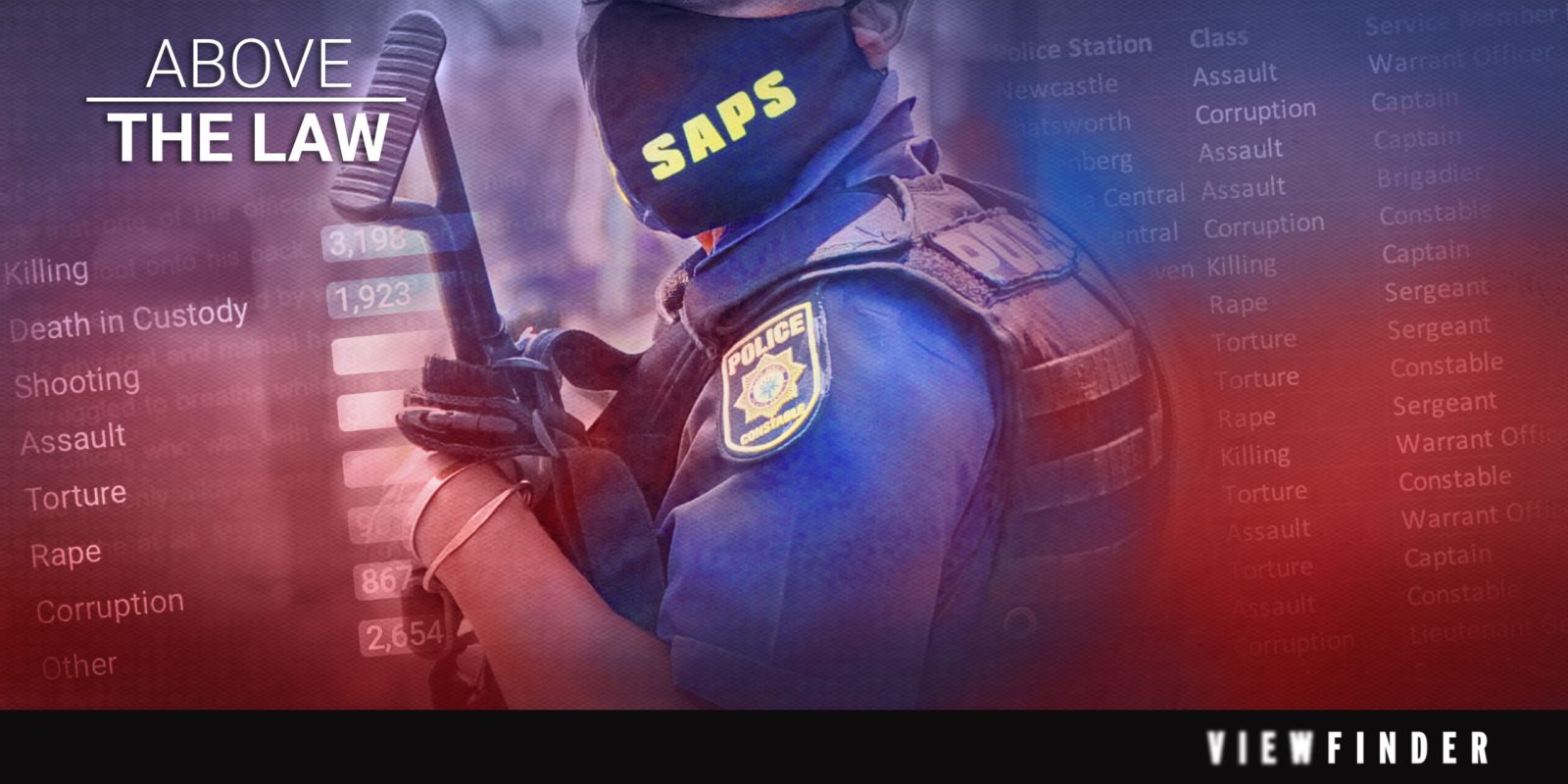 On average, police in South Africa kill someone every day. Viewfinder has now published the police watchdog’s database on these killings, along with other complaints of police brutality and corruption: More than 47,000 cases registered between 2012 and 2020. A new Police Accountability Tracker dashboard, which houses this data, allows anyone in South Africa to home in on their police station and to gauge what contribution officers there have made to the body count and caseload. The data also reveals the extent to which police officers implicated in violent crimes escape accountability.

On 6 February 2020, 36-year-old Adam Isaacs lay fighting for his life on an operating table at Cape Town’s Groote Schuur Hospital. He was suffering from kidney failure brought on by blunt force trauma, and his intestines had been badly damaged. According to several witnesses, his injuries were inflicted during an assault by police officers and soldiers who had teamed up for a night-time operation in Athlone, in Cape Town, a few days earlier.

On that night, witnesses said, the police and soldiers arrested Isaacs, stripped him to his underwear and beat him for hours while they drove him to different locations and interrogated him about the whereabouts of a firearm.

The surgeons could not save Adam. He died at 10:45pm on 6 February 2020. Ashia and Washila Isaacs, his sister and mother, were by his side. They had still not washed Adam’s blood off the wall at their family home, where the assault started, in the hope that the splatter may be of use to investigators some day.

With Isaacs’ death, the total number of killings by police registered since 1997, when post-apartheid record-keeping began, quietly surpassed 10,000. From there, the killings continued at a pace that had remained roughly consistent over the preceding 20 years: up to a total of 30 in February 2020, 26 in March, 27 more over the first six weeks of the Covid-19 lockdown. For every financial year since 2012/13, the Independent Police Investigative Directorate (Ipid) has registered upwards of 380 people killed by the police — more than one person per day, on average.

Ipid also registers deaths in custody and allegations of assault, shootings, torture, rape and corruption against members of the South African Police Service (SAPS) and the country’s various Metro Police services. After months of work on the data, Viewfinder has now published a database of more than 47,000 cases registered between April 2012 and March 2020. Included are details pertaining to more than 3,000 killings by the police. The data was obtained through public records requests to Ipid over the past three years.

Viewfinder’s Police Accountability Tracker dashboard houses this data and allows anyone in South Africa to home in on their local police station. In the period covered by the data, for instance, police in Mthatha in the Eastern Cape were reported for 29 killings. Twenty-one people died in custody at Tembisa SAPS in Gauteng. Police in Phoenix in KwaZulu-Natal were implicated in 27 torture cases and more than 200 assaults. Police officers at Mitchells Plain in the Western Cape were accused of 12 rapes.

Using the dashboard, victims of police brutality who lodged complaints with Ipid during the period covered by the data can locate a “progress report” for their cases. They can check whether the officers involved were held accountable through criminal prosecution or disciplinary proceedings. The overwhelming majority of these victims will be disappointed. During the seven years covered by the data, Ipid reported that fewer than 200 of its cases resulted in police officers being dismissed following disciplinary hearings. Prosecutors in court fared only slightly better, with about 300 criminal convictions leading to the imprisonment of police officers.

The data visualisation above shows the ratio between cases against the police registered by Ipid and criminal and disciplinary convictions resulting from Ipid cases between April 2012 and March 2020. (Data visualisation: Viewfinder)

Police officers have dangerous jobs. When they use force, they often do so legally. Not all the complaints in Ipid’s database can be assumed to be abuses of power. Nonetheless, the summary descriptions of these complaints, captured in Ipid’s registers, sometimes imply violence beyond what is allowed for in law.

Last year, the authors of Police Integrity in South Africa published the results of a survey of nearly 900 police officers. One in four respondents was unsure whether “shooting an unarmed stranger in the back” was a violation of SAPS rules. A third did not know whether “striking a handcuffed man in the kidneys” was against the rules.

This data visualisation provides a series of sample descriptions of complaints against the police, captured by Ipid between April 2012 and March 2020. The entries have been redacted to protect the identities of the complainants and the accused. They were selected to ensure that no active investigations are compromised. (Data visualisation: Viewfinder)

Viewfinder’s reporting has revealed that problem officers often go unpunished because of the failure of the SAPS’s internal disciplinary mechanism to hold them accountable, as well as because of funding constraints at the police watchdog. Since Viewfinder’s findings on Ipid’s habit of “finalising” poorly investigated cases to inflate performance statistics, Ipid has promised to develop more “impact” oriented targets. But, more than two years later, this process is not complete.

In June, shortly after Viewfinder’s exposé on the failure of SAPS’s disciplinary system was published, the Civilian Secretariat for Police Service also started a review of “loopholes” in police discipline regulations. The secretariat did not respond to a recent request for an update.

These high-level processes will come as little comfort to Adam Isaacs’ mother, sister and the tens of thousands of other victims and family members represented in Ipid’s data.

Ipid says that it is still investigating Isaacs’ murder. More than a year after the killing, statements had still not been taken from several witnesses.

One of the officers implicated in Isaacs’ killing had several Ipid findings against him for assault in the years and months leading up to January 2020. He was consistently let off the hook by his superiors, via a disciplinary acquittal in one case, outright refusals by SAPS to take disciplinary steps against him in others, and “warnings” when he was found guilty in two other cases.

Several eyewitnesses have linked this officer to what happened to Isaacs. But he remained on duty. DM

The development of Viewfinder’s Police Accountability Tracker was funded by Luminate and Millennium Trust. This investigation was also supported by the Henry Nxumalo Fund for Investigative Reporting. This article was co-produced and edited by GroundUp. Header poster design by Alex Noble with a photograph from Getty Images.