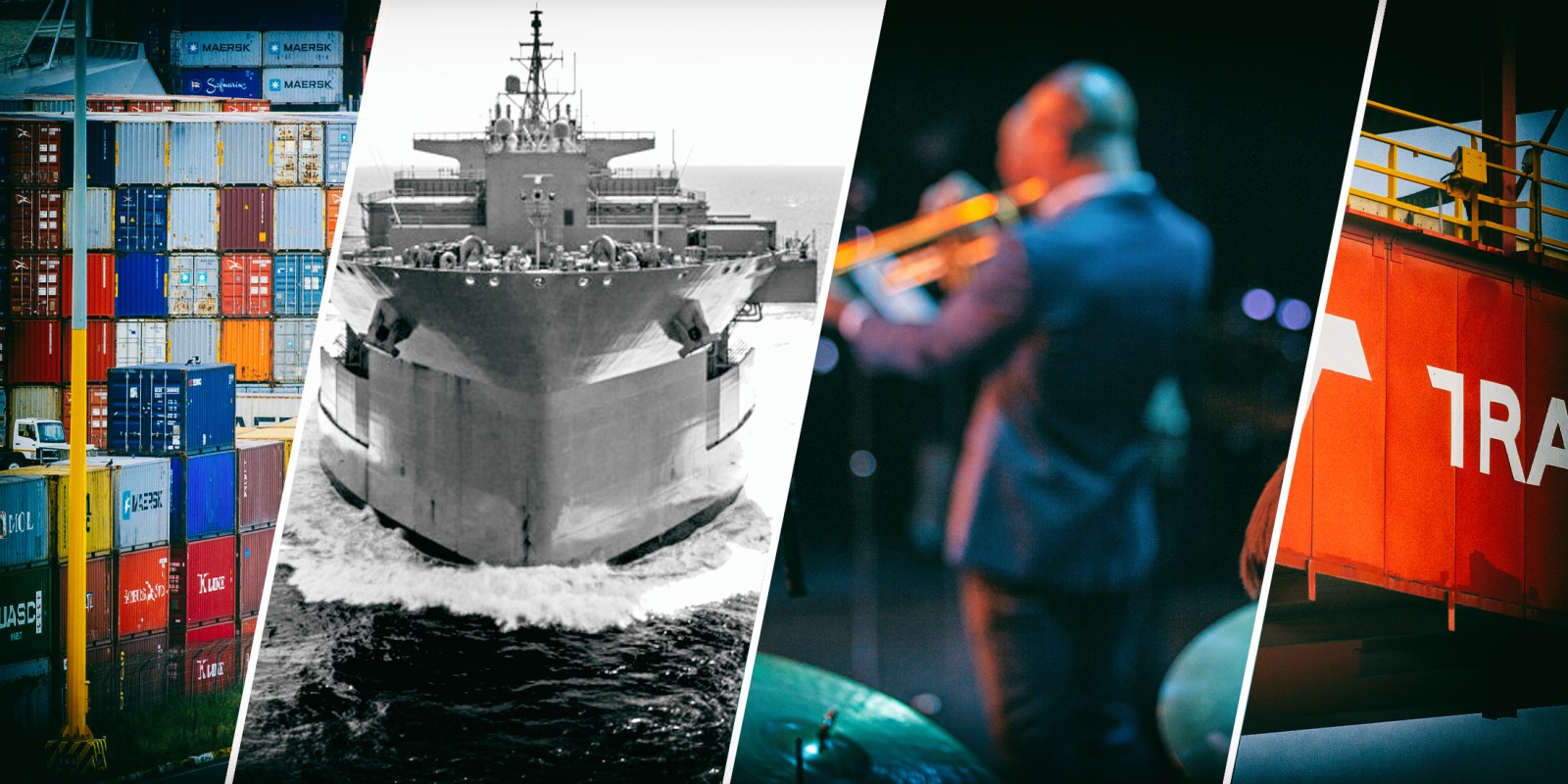 An occasional column based on glimpses of the goings-on at the Port of Cape Town and how politics and economics are caught between the devil and the deep blue sea.

After several silent days, the 2am shift is back at Cape Town harbour. Well, just past 2am on Tuesday one crane started swinging out over the Chesapeake Bay, the Liberia-flagged container vessel that had pulled in during the early hours of Friday, 16 October. A bit further away a straddle carrier was in action.

The cargo vessel, named after the largest US estuary, berthed in a spot that’s been empty for days; since Sunday, 10 October to be precise, when the USS Hershel “Woody” Williams departed with a couple of toots just before 10am.

It was a tight manoeuvre — reverse, swing out right and then straight ahead — performed by the US Navy Expeditionary Sea Base, which is effectively a sea platform to support military operations, that’s longer than the V&A Waterfront’s Makers’ Landing and Cruise Terminal combined.

The US Navy vessel, permanently part of the US Africa Command (Africom), arrived for a second time in some seven months in Cape Town on 25 September, this time not just to refuel and restock as in February, according to US Naval Forces Europe-Africa/US 6th Fleet statements, but also to undergo some maintenance over 14 days.

Last time around, in February, Covid-19 restrictions and health and safety measures meant no public visits to the ship and no crew visits to the city.

This time around, definitely at least the navy brass band got off — and went all the way to Langa, one of Cape Town’s oldest townships. The guys in their dress whites provided entertainment at iKhaya Le Langa, on the day a group received agricultural training there.

An initial shyness about the VIP treatment — “It’s rare for someone to come play for you,” as someone in the know described it — quickly evaporated. The jazz, by all accounts, was catchy, the US navy men’s performance spirited — and everyone, including the lunch crowd, got into the swing.

It all unfolded at a Langa avenue named for Walter Benson Rubusana (1858-1936), a founding member of the ANC and an educator, linguist, politician, author and editor.

His book, Zemk’inkomo magwalandini, translated loosely from isiXhosa as The cows are being stolen, you cowards!, was a clarion call marking the intellectual resistance and struggle against colonial oppression.

Fast forward 100 years or so, and in August 2016 “zemk’inkomo magwalandini” ran like a thread through the funeral of anti-apartheid activist, premier and Cabinet minister the Rev Makhenkesi Stofile.

“Our movement is captured and consequently the state is captured,” said Pityana, pointing out how Stofile and others wrote of their concern to the ANC, only to be left unanswered.

The cows are being stolen — again, was the upshot.

ANC and RSA president Cyril Ramaphosa, or Mr Long Game to some, on occasion, seems to have lost patience. Sometimes residents armed with their lists of grievances that their ward councillors and municipalities have failed to address over the past five years were told to “thula”, to be quiet. Not quite the “thuma mina”, (“send me”), civic-minded presidential messaging of 2018.

But still, Ramaphosa is the drawcard of the ANC as its self-claimed unity and renewal seem mostly met with scepticism. He’s polling better than previous presidents, even if only by a small margin, but definitely better than his political home, according to just about any poll available. And so most, not all, ANC municipal posters feature the country’s president, even if the poll on 1 November is about local government.

The DA, meanwhile, is hammering home its anti-corruption stance and claimed delivery track-records, from Kouga in the Eastern Cape, and Gauteng’s Midvaal, across most Western Cape councils, to the feather in its cap, Cape Town, the metro that the DA has controlled initially from March 2006 in a coalition, and then outright on its own since 2011.

The last time the DA dropped support was in the May 2019 elections when it fell to 20.77% from the 22.23% scored in 2014 — and its leader Mmusi Maimane walked the plank. But that was in a national election; maybe a municipal poll is different. Exactly how it turns out will depend on 1 November at the hustings, also for others.

Unlike the municipal messiness, matters naval are far from being down in the doldrums, at least according to the US Naval Forces Europe-Africa/US 6th Fleet statements linked to the USS Hershel “Woody” Williams:

But exactly what happens to global shipping routes remains unclear, even if right now a key focus is on container prices finally dropping, a little at a time.

But at those rates, the rising cost of goods in South Africa may start to make some sense.

Back at Cape Town port, the stack of white containers that had been sitting dockside for several days before the Chesapeake Bay moored, continue to sit there. Untouched.

It’s a sight. Much of the container storage space near the Cape Town Cruise Terminal has remained at best sparsely occupied in what is a signal of global supply-chain disruptions. Apparently, the Western Cape’s citrus and wine farmers are not too pleased.

The harbour has been unusually subdued. Yes, a couple of oil and oil product tankers, like the Liberia-flagged Cielo di Rotterdam, docked en route from Mangalore, India; Singapore and Gulei in China, according to maritimetraffic.com. Yes, the fishing vessels still cram into the Victoria and Alfred basins. As do the “pleasure craft”, like the British-flagged Blue Orchid that has moored after a trip from St Francis, according to marinetraffic.com.

But compared with even a couple of months ago, it’s awfully quiet. Maybe it’s seasonal — maybe it’s the lull before the storm. DM