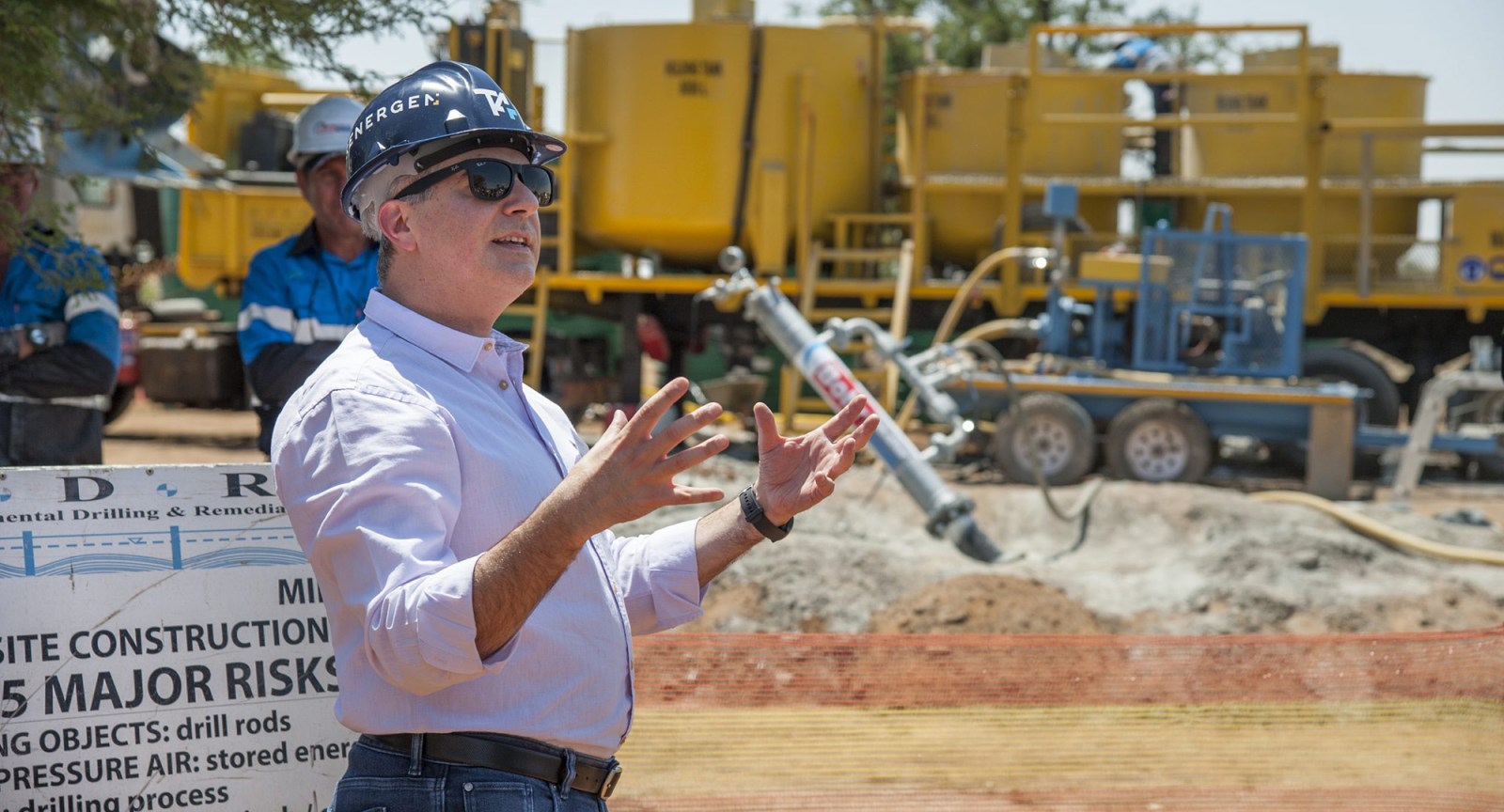 An announcement from Renergen triggered a 7% share price hike on the day and 17% over the past week. The share has risen 103% in the past year as punters buy into an incredible liquefied natural gas and helium story. The question is, is the hype warranted?

A freak cosmological accident two billion years ago saw a giant asteroid plough into the Witwatersrand geological complex, generating the greatest energy release recorded on earth. The impact at the site, marked by the Vredefort Dome, shifted South Africa’s goldfields and led to the formation of what is possibly the richest concentration of helium reserves in the world.

Helium is used in the manufacture and operation of magnetic resonance imaging machines, in the making of fibre optics, semiconductors and the powering of rockets, to cool nuclear power stations, in air-bags, and, of course, to fill party balloons. In 2018 the US government, under Donald Trump, declared it one of 35 mineral commodities critical to the economic and national security of the US. It’s also potentially in short supply.

Until 2015, the presence of helium — alongside the gas that was contained in the many fissures and cracks of the rock formations that cross Welkom, Virginia and Theunissen in the Free State — was not known outside academic circles. That was until the small, listed natural gas company Renergen, which owns the Virginia Gas Fields, began preparing to build a modest 1.5MW gas-fired generator to supply power to a nearby mine.

“We needed a fresh gas sample for the generator supplier and, unlike the previous owners who left the samples for days — allowing the helium to evaporate — we drove the samples directly for testing,” recalls Stefano Marani, CEO of Renergen.

Needless to say, plans to invest in renewable energy, powered by methane gas, were shelved (it would destroy the helium) and all efforts have been focused on commercialising what is known as the Virginia Gas Project, which spans 187,000 hectares.

Renergen has been listed since 2015, but it was only in December 2020 that the share reached its original listing price of R13/share. Since then, it’s been on a tear rising to R29 in March, before settling at about R26.18 currently. The price rise has been accompanied by no less than 87 stock exchange news announcements, documenting every milestone along the way — from exploration reports to drilling updates, details on capital raises, supply agreements with the likes of Consol, offtake agreements and its new cooling solution, Cryo-Vacc.

Many of the announcements are not required by the JSE and Australian Stock Exchanges, on which Renergen has a secondary listing, and capture much of management’s excitement about the developments. This has prompted some analysts to question whether there is more hype than substance to the company.

“This is one that I will stay away from,” says one analyst, contacted by DM168. “It’s an exciting space, but we are not invested,” says another.

“There seems to be a lot of hype… it is, however, highly speculative and a small cap,” says Cy Jacobs, head of investments at 36ONE Asset Management.

“There seems to be a great deal of professional marketing surrounding it, and ultimately we are not sure of its potential. That said, we have a smallish fund that trades in small caps and shorter term opportunities that has some exposure, and has done really well with a small position.”

In its defence, while Renergen is still in the ramp-up phase and is not yet profitable, it has delivered on its milestones and inked several agreements for the offtake and sale of both the liquefied natural gas (LNG) and the helium, de-risking the investment.

“Our LNG plant, which is a pilot, will come on stream in December,” says Marani.

It cost R1-billion and will come on stream largely on time and on budget — despite the fact that much of the equipment comes from China and the world’s supply chains have been jammed up by Covid.

When Phase 1 comes on stream, funds will flow immediately as Renergen has an agreement in place to supply Consol Glass’s operations with gas over the next five years, as well as agreements with logistics operators.

Total will also market and distribute the LNG from its fuel stations situated on major highways. On the helium side, it has an off-take agreement with Afrox parent Linde Plc, for 80% of the gas.

Plans for Phase 2, which is an order of magnitude bigger, are significantly advanced with commercial operation anticipated in 2023. “We have offtake agreements for 65% of the helium with Linde, Russia-based Helium24 and industrial gas firm, Messer,” says Marani.

Furthermore, the group has developed Cryo-Vacc as a nitrogen/helium cold storage solution for the transport of vaccines (among other biologics) for periods of up to 30 days.

“Renergen is the real deal,” says Keith McLachlan, investment officer at Integral Asset Management. “That doesn’t mean it doesn’t come with the usual risks involved in greenfield gas developments, but the asset is quite real and likely highly commercially viable. In particular, the helium resource is quite unique, even on a global playing field.”

There are people talking the book up, adds Chris Reddy, portfolio manager with All Weather Capital. “And so you should take Twitter commentary with a pinch of salt.

“But the company has delivered on promises to date and there are some key events coming up that should persuade sceptical investors over the line.”

One is an imminent update on proven gas reserves, which is expected to be positive. Another is the imminent commercialisation of Phase 1. “Investors want to see cash flow, they want to know that the company is not just a speculative punt and is getting close to break-even,” he says.

The latest deal to get investors talking, and which drove up the share price, was the announcement that Renergen has inked a deal with US-based helium trading firm Argonon to establish a helium spot market, which will bring pricing transparency to what is an opaque market.

While details get technical, the bottom line is that Argonon will use the helium it has acquired via forward contracts to issue tokens, which will in due course be listed on an exchange developed by Purple Group, owner of Easy Equities. The tokens will be fully redeemable for helium at the plant, giving investors the ability to participate in the difference between refinery price and the current spot price.

“Unlike other more transparent commodities, helium is not presently traded in the spot market and a visible price per unit is not available,” says Marani. “The collaboration between Renergen and Argonon is specifically designed to bring transparency of pricing into the helium market and highlight the growing global importance of helium.”

More importantly, the initiative could help Renergen raise capital for further drilling at the Virginia Gas Project without needing to issue further shares for cash, which would dilute existing shareholders.

“Capex required for Phase 2 is estimated at R8-R9-billion, which is significant for a company with a market cap of R3-billion,” says Reddy. “While 70% of this could come from development finance or other international lenders, the balance would have to be raised locally.”

The deal with Argonon will see Renergen raising $25-million, or R367-million, which will enable them to part-fund the ongoing expansion on the Virginia Phase 2 project. But it could lead to bigger things, says independent analyst Anthony Clark.

“To reach their full potential in 2024, they have to spend huge amounts of money to develop the site, but using the soon-to-be established trading platform could provide an elegant solution.”

He explains: Renergen has tied 65% of its future helium production into global contracts, leaving the balance — 35% — freely tradable. “If they were to tokenise all of this, and it’s a big if, they could fund their entire Phase 2.

“Now that is something worth thinking about,” he says. BM/DM