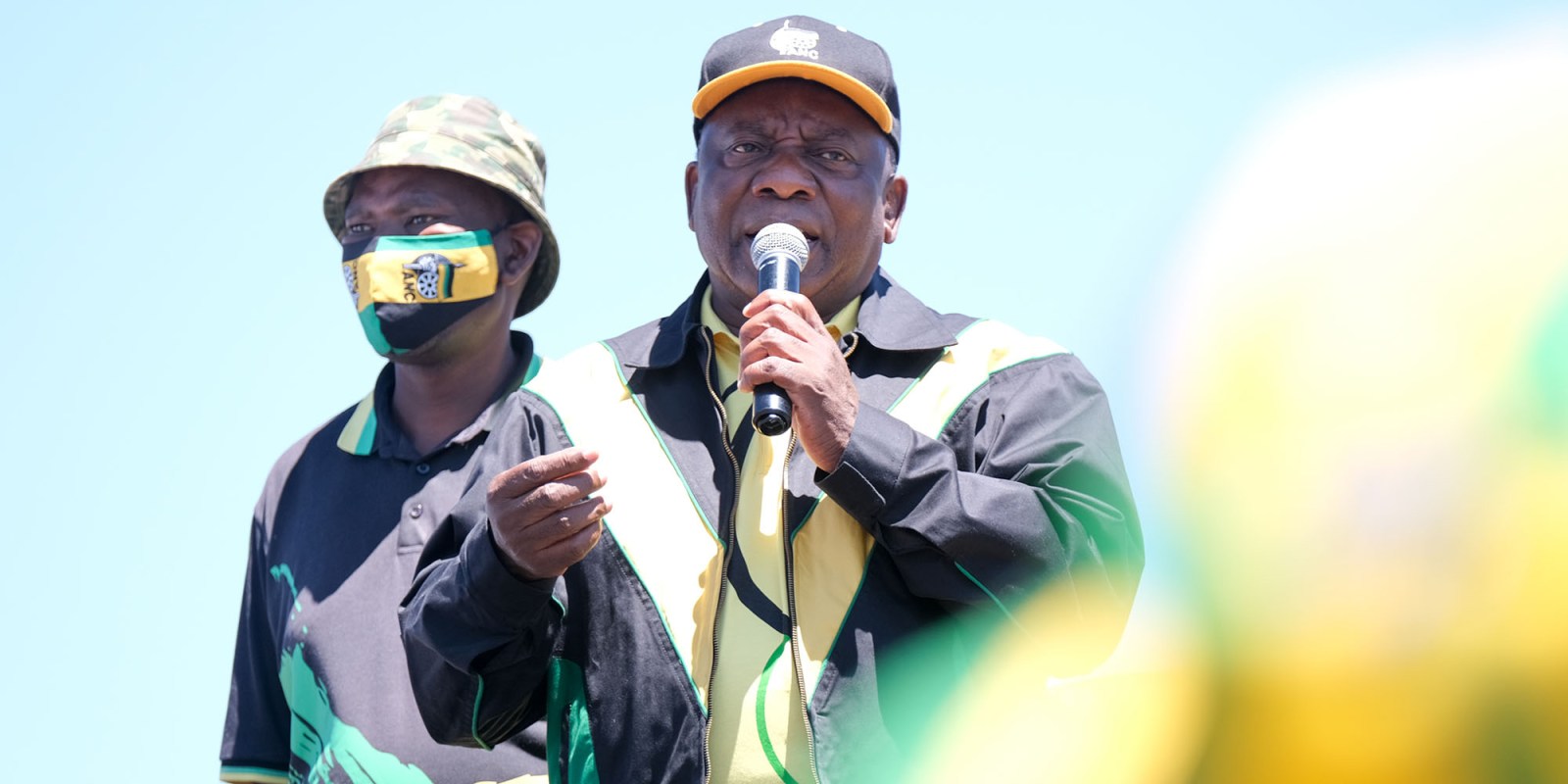 President Cyril Ramaphosa has traversed suspended ANC Secretary-General Ace Magashule’s home territory for the past two days. It was as much about the ANC’s election campaign as it was about everything else.

President Cyril Ramaphosa’s campaign visit came just before a court appearance by Ace Magashule and his co-accused on Tuesday, an event that isn’t expected to last beyond a day. The appearance is for a pre-trial conference which was postponed from 11 August, when some of the accused appointed new counsel.

Magashule hasn’t been spotted on the campaign trail and neither have his supporters, but some locals said they saw him around town in Harrismith the other day. They also said on Monday that no rallies or gatherings were planned for his court appearance on Tuesday.

Magashule’s name came up regularly when locals talked about money squandered on, for example, the eradication of the asbestos roofs that still cover many houses here. It’s in relation to this tender that Magashule and a number of other former leaders, administrators and business people have been charged.

Ramaphosa’s campaign visit was about shoring up support for the ANC in a province where the party fears losing votes due to either active sabotage by Magashule and his supporters, who have registered a number of former ANC candidates as independents, or a stayaway by voters who have become too disillusioned with the broken promises they hear from politicians to even bother to turn up.

The fact that the ANC in this province is run by an interim provincial committee, whose main task is to prepare for the next conference, isn’t helping the party.

Shortly before Ramaphosa came to the province, several national ANC leaders were doing all they could to douse some of the flames resulting from the divisions here. Social Development Minister Lindiwe Zulu, for example, said she helped try to persuade those registered as independent candidates to return to the ANC, while Deputy President David Mabuza’s visit to the province resulted in the National Treasury calling a halt to Mangaung’s efforts to establish a metro police force.

Activists were concerned over where the money would come from and how it would be managed in a metro not known to have been managing money well. Mangaung Concerned Community leader Themba Zweni said he wasn’t entirely satisfied, but these were early signs that politicians were listening.

It didn’t stop the grouping from holding up handwritten posters to tell Ramaphosa he’s their last hope in intervening in a dispute that some businesses had with the provincial public works department over being appointed to do some jobs, but never having given the jobs — or the money.

One source close to Ramaphosa said threats by the group to disrupt the president’s campaign event led to it starting two-and-a-half hours late, and was the reason security officers drove up and down the venue in a white minivan brandishing guns and checking out audience members.

The group doesn’t have ties with Magashule, though.

At the next stop, a group of community healthcare workers caused disruptions because they were unhappy about being on contracts without benefits.

Ramaphosa makes at least five such campaign stops, speaking to residents, including scores of children, each day on the road.

Ramaphosa’s tour of the Free State, from Harrismith and Phuthaditjhaba in the Maluti-A-Phofung municipality, through the Mangaung Metro, then to Welkom in Matjhabeng, was also about showing that he can step into Magashule’s province and still draw cheering crowds. Ramaphosa did, incidentally, avoid Tumahole, where Magashule’s home is.

ANC supporters came in their hundreds, many in taxis and buses. The ANC’s elections head, Fikile Mbalula, has been overseeing such mobilisation for a while and it doesn’t hurt that he is also transport minister.

Ramaphosa’s numerous campaign stops means he repeats the same promises, and even the same dad jokes from 2019, just switching language to the dominant one spoken in the area. (Ramaphosa speaks all 11 official languages fluently.)

On Monday, he checked that he was in a metro where people receive two ballot papers, and urged voters to put their cross next to the ANC on both.

He also told the crowds that the ANC will ensure that at least a quarter of its candidates for councillors are young people, and 46% women: “Women must also come on board and work for the people,” he said. “And we don’t need thieves, we don’t want laziness and we don’t need people who fail to look after people.”

ANC Youth League convenor Nonceba Mhlauli told News24 that the league wants its members to sit on interview panels that will decide on party mayors after the elections.

Ramaphosa told eNCA journalist Pule Letshwiti-Jones that the ANC was confident of winning in the Mangaung Metro again. This election campaign also marks the start of Ramaphosa’s campaign for a second term as party president, ahead of the party’s electoral conference due December next year.

If the ANC does badly in these elections, it will give Ramaphosa’s critics ammunition. It also provides him with an opportunity to reconnect personally with members following the Covid-19 lockdown — an important start to winning votes, also for himself. DM