In an address to European lawmakers in Strasbourg, Morawiecki said the European Commission was using “financial blackmail” in delaying Warsaw’s request for 36 billion euros ($42 billion) in stimulus funds from the EU. He also said that the bloc’s top court was conducting a “silent revolution” with its rulings, which go against democratic standards.

His bellicose tone is likely to heighten tensions in the dispute, which came to a head earlier this month when Poland’s top court ruled that some EU laws were incompatible with the country’s constitution. The primacy of EU law over national law is written into the bloc’s founding treaty.

“I reject the language of threats, warnings and coercion,” Morawiecki said on Tuesday. “I won’t agree to politicians trying to blackmail and threaten Poland so that the blackmail becomes the way of conducting politics against any member states.”

The constitutional dispute sparked street protests in Poland and led the opposition to accuse the government of trying to lead the country out of the EU, charges that Morawiecki dismissed as “fake news.”

Recalling Poland’s break from communism in 1989, European Commission President Ursula von der Leyen told lawmakers at the same debate that she’s deeply concerned about the ruling that “calls into question the foundations of the EU.” 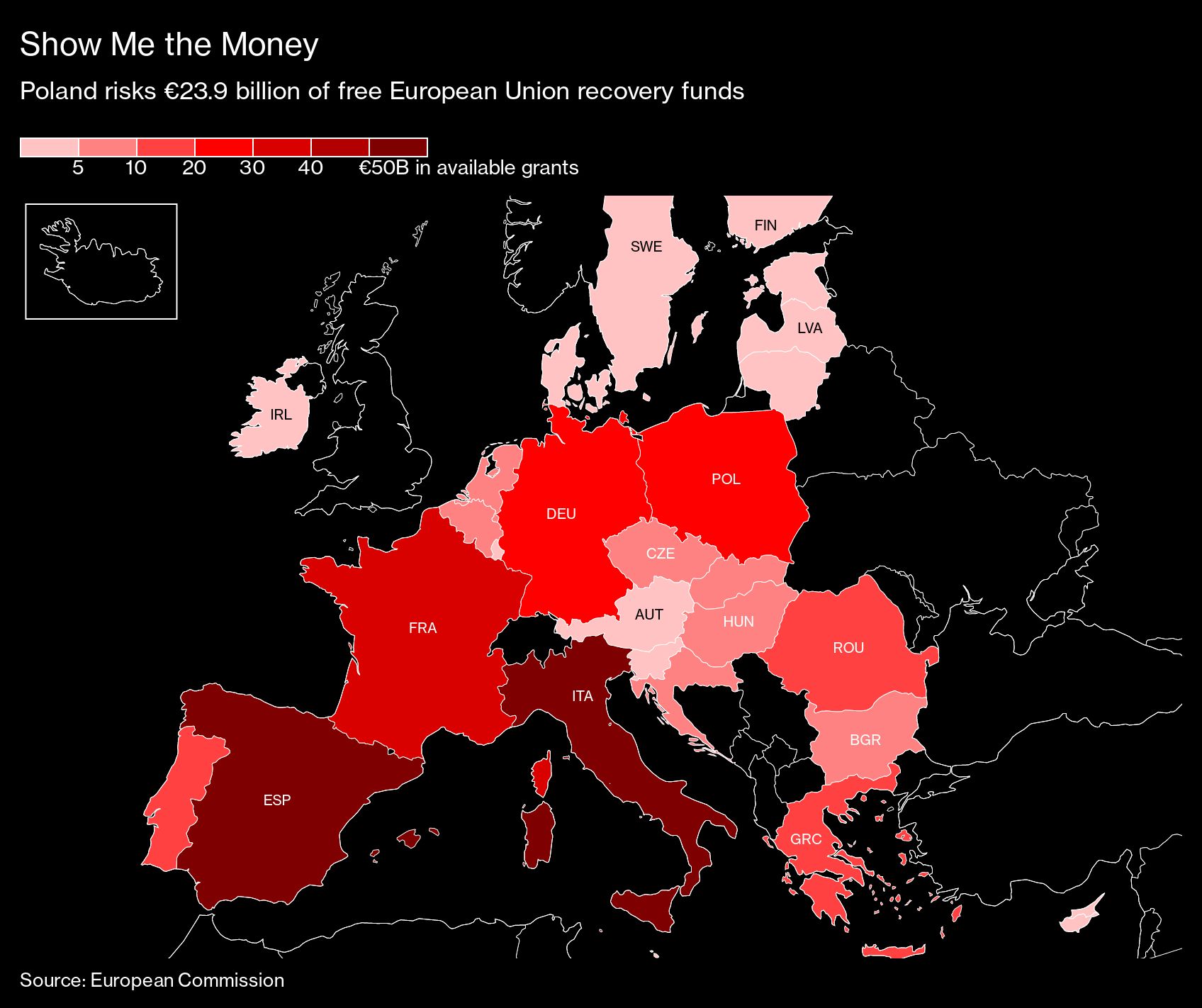 She said the EU‘s executive is looking at all options to react against the verdict including infringement procedures, withholding the stimulus funds and suspending certain voting rights.

“The rule of law is the glue that binds our union together,” von der Leyen said. “We cannot and will not allow our common values to be put at risk.”

Morawiecki defended the ruling in a letter he sent to EU leaders on Monday, saying that Poland is ready for a dialog on the rule of law. But he warned that the country wants its sovereignty respected and financial coercion would backfire and undermine the entire EU.

The European Parliament has been pushing the commission to take a hard line against Poland after the nationalist government spent months ignoring the European Court of Justice’s order to reverse controversial changes to the judiciary that critics say is meant to silence opposition to the nation’s ruling Law and Justice party.

Whether Morawiecki’s succeeds in placating Brussels is key to Poland’s bid to ensure that it continues receiving the bloc’s financial support. The commission may trigger a new tool as soon as this week, which allows it to withhold budget payments to member states that fail to adhere to the bloc’s democratic standards, EU Justice Commissioner Didier Reynders told Bloomberg last week.

The country is already facing a delay in the approval of its share of the bloc’s pandemic aid and Dutch Prime Minister Mark Rutte told his government last week that he’ll ask the EU to withhold the money earmarked for the bloc’s largest eastern member.