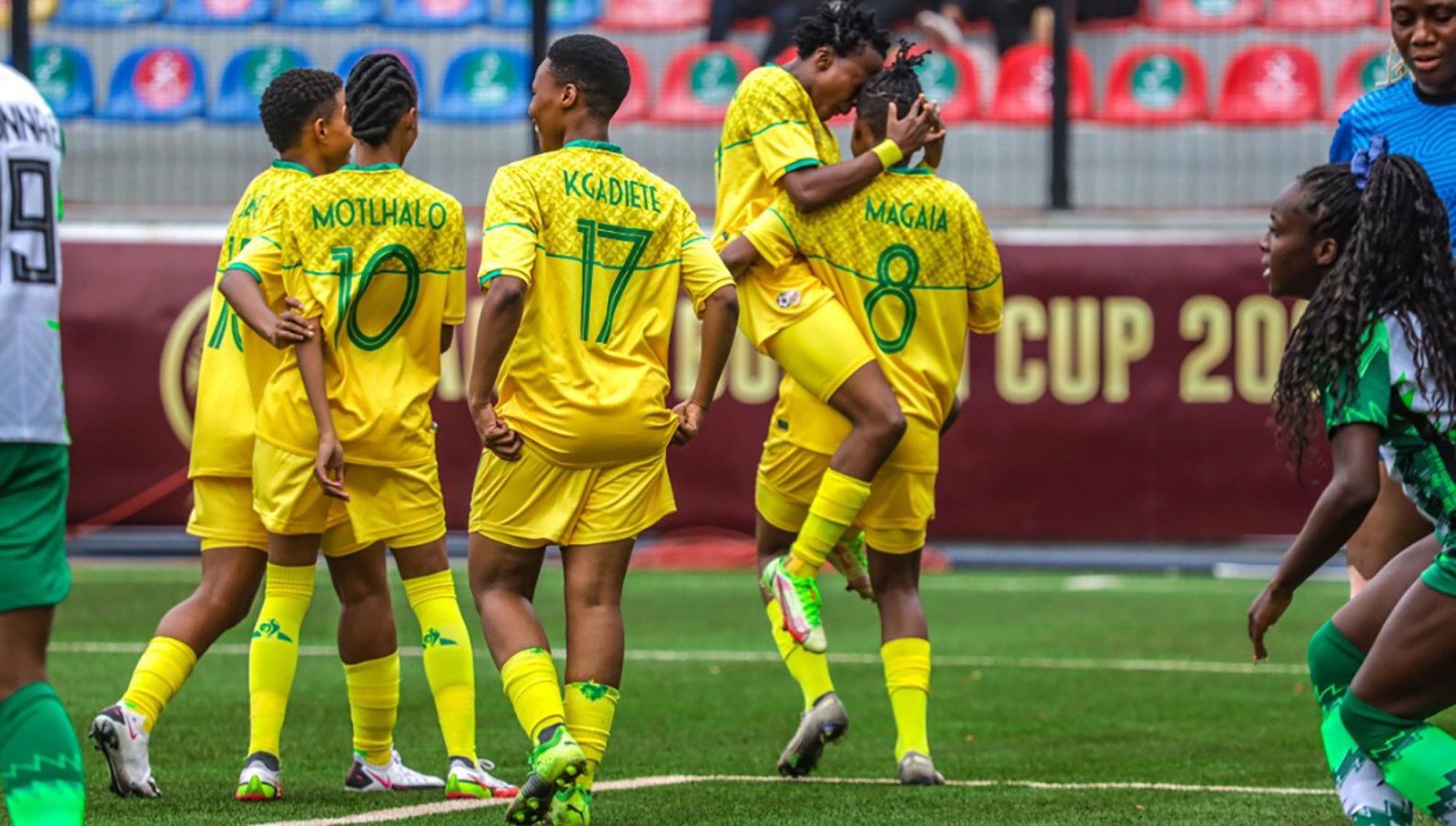 Banyana Banyana players celebrate after their victory over Nigeria in the Aisha Buhari Cup in Lagos on Tuesday. (Photo: Twitter / @Banyana_Banyana)

The Africa Women’s Cup of Nations is set to be staged from 2 July 2022 in Morocco. Banyana Banyana begin their push to qualify for the continental showpiece with a two-legged clash against neighbours Mozambique.

Over the last few weeks, Banyana Banyana experienced a rollercoaster in terms of results.

All that will be put aside though as they take on Mozambique in Maputo on Wednesday afternoon as part of the 2022 Africa Women’s Cup of Nations qualification process.

One month ago, they demonstrated just how destructive they can be when at full strength as they tore apart continental rivals Nigeria in Lagos. That scintillating 4-2 victory earned Desiree Ellis’s side the honour of walking away with the first-ever Aisha Buhari Cup.

Even in that impressive victory against their old foes — the Super Falcons — there were instances of the team switching off and taking their foot off the paddle.

Ultimately, without their overseas-based contingent, the cracks became visible and the team bombed out of the regional Cosafa Women’s Championship after losing out to Malawi due to what coach Ellis termed “criminal defending” and complacency.

It was the first time in the competition’s history that Banyana Banyana had failed to reach the final. That semifinal loss also denied South Africa a shot at a record-extending fifth consecutive Cosafa Cup success.

However, according to Ellis the triumph in the Buhari Cup, and the Cosafa Cup setback, in which her team also lost to Zambia in the bronze medal match, is behind them and the team is now fully focused on the Awcon qualifiers.

Speaking after the team’s arrival and first training session in Maputo, Ellis said: “The light training session went well, everyone is upbeat and looking forward to the match on Wednesday. We have another session tomorrow (Tuesday) and we will take it from there. We have to make sure we get a good start because the first leg is always vital.”

The two teams faced each other in the group phase of the Cosafa Cup, with Banyana winning 3-1 and Ellis says that there are some important takeaways from that recent clash.

“We played them before at the Cosafa Cup, that game is behind us, we know their strengths and weaknesses, and I am positive they know more about us,” the 58-year-old stated.

“We have one more day of preparation and then it’s a go-ahead for Wednesday… If we execute our plans, we will be ready for the game on Wednesday.”

Kick-off is at 1pm. The return leg between the two sides will be played on Tuesday, 26 October 2021 at Dobsonville stadium in Soweto. DM