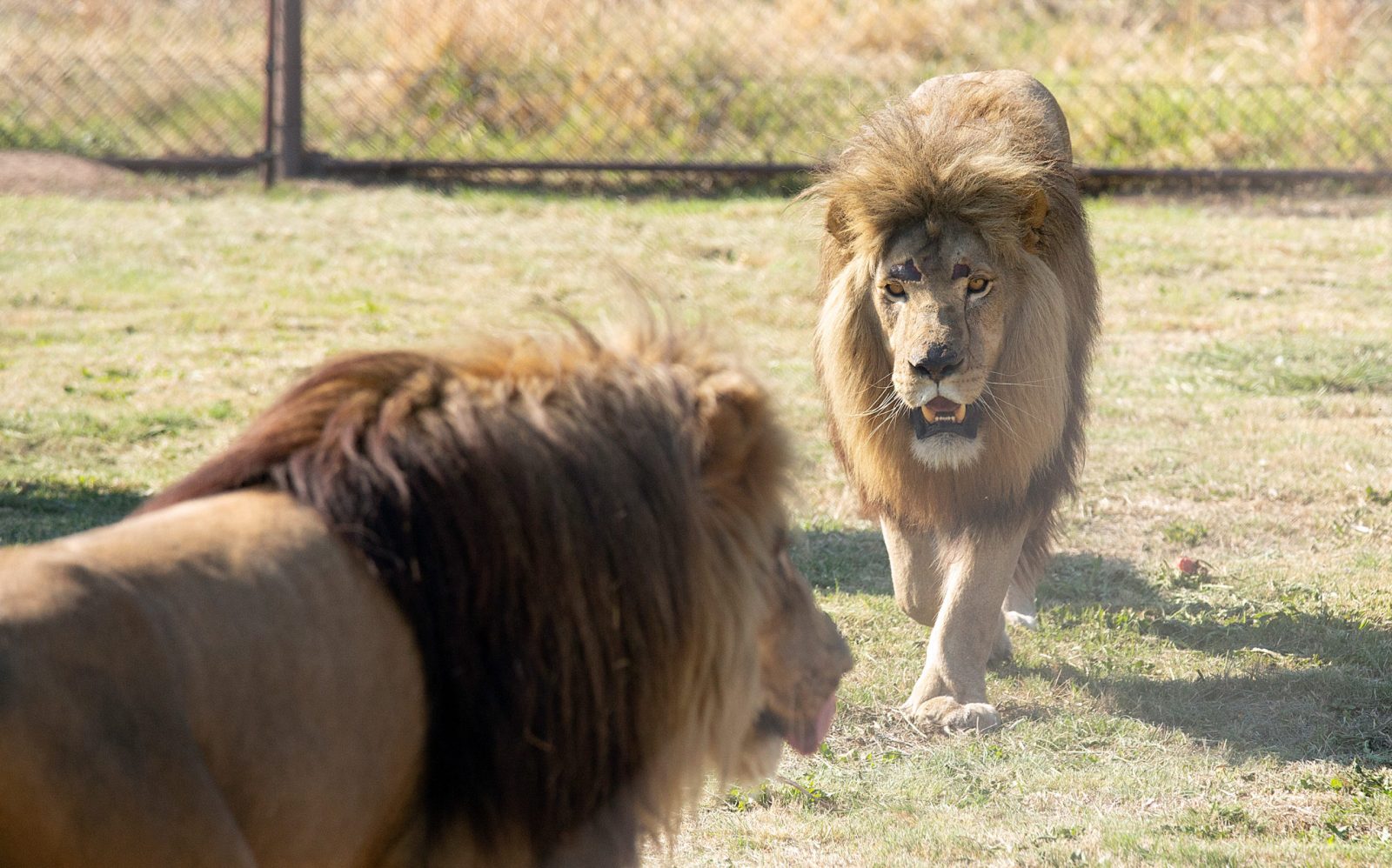 Samson, a lion transferred from the Seaview Predator Park in Gqebehra, walks towards Tom after being released into his enclosure at Lionsrock in Bethlehem, Free State. Both lions appear to be settling down well. (Photo: Daniel Born for Four Paws)

The relocation of two captive lions from Seaview Predator Park in Gqeberha to the Lionsrock sanctuary in the Free State underlines that there is still much to do, Environment Minister Barbara Creecy’s draft policy notwithstanding, before the intensive breeding of captive lions is brought under control.

On Friday, 15 October, after travelling for more than 1,000km and a lifetime of captivity at Seaview Predator Park, two lions, Tom (11) and Samson (6), were released into Lionsrock Big Cat Sanctuary in the Free State.

The sanctuary is run by Four Paws in South Africa, a global animal welfare organisation which reveals suffering, rescues animals in need and protects them from direct human influence.

Daniel Born, PR officer at Four Paws, told Our Burning Planet that the lions are, “a little bit skittish right now, but health-wise seem to be doing well. You know it’ll take them a little while to adapt.

“Their previous enclosures were just very small and they haven’t really seen open spaces properly, so they’re very timid, hiding out in their night enclosure because they prefer a smaller space. Obviously, it’ll change over the next month or so… we’ve got good animal caretakers, they’re going to work… try and get them just a bit more confident.”

The lions needed a place to go after their original home, Seaview Predator Park in Gqeberha, was forced to close after one of their Siberian tigers killed park employee David Solomon in June 2021 while he was fixing an electric fence near the enclosure. Four Paws had previously rescued two tigers in June, and now is helping Tom and Samson.

Fiona Miles, Director of Four Paws said, “For many years, the country allowed lions to be bred and kept in captivity unregulated. Samson and Tom are just two of an estimated 12,000 lions being held in captivity in private facilities across the country.

“These animals are often used in tourist attractions, such as cub petting, walking with opportunities for viewing purposes and may even be used for trophy hunting. The enclosures in which they are kept are inadequate and provide minimal stimulation.

“This is why we urge the South African government to act now to stop the farming of all big cats and to ban all commercial trade of big cats and their parts from, within and to South Africa, and to finally, #BreaktheViciousCycle.”

In this case, the owner has surrendered the animals to the care of Lionsrock.

There are about 300 parks like Seaview Predator Park and breeding farms all over South Africa where cubs are bred as tourist attractions or sold for trophy hunting.

“There’s many examples like this,” said Born, explaining that a cub will be taken from its mom once it’s born and from birth until two to three months will be used for cub petting. When they get too big for that they will be used as photo props and for walking experiences, where they put a leash on the lion and walk it around the block or a park.

Once they’re about a year old, they are too big and pose a danger to tourists, as there’s always a chance they’re going to attack. They are put into small enclosures to breed and are then sold to be hunted and shot. After the hunters collect their “trophy” their bones are used for the international bone trade, primarily in Southeast Asia.

Born said the hunting trade is huge in South Africa, with hunters spending up to R300,000 to go on hunts.

There is also canned hunting which is even more extreme than trophy hunting. Born explained that the animals, mostly lions, are held in a small enclosure and someone will be at the back of a bakkie and shoot them from 20m or 30m away. There are laws in place to stop canned hunting, but trophy hunting still exists.

Four Paws reported that every year thousands of hunters from Europe and the US come to trophy hunt wild animals, to bring home their “trophy” to display on their wall back home.

After the NSPCA and the Free State Department of Small Business Development, Tourism and Environmental Affairs discovered lions in poor physical health, kept in overcrowded conditions with no access to drinking water, and 13 lion carcasses in a freezer at a lion farm in the province in August this year, Fiona Miles, Director of Four Paws in South Africa, said:

“Four Paws is appalled that this is still a reality in South Africa. Lions are being exploited for tourism, trophy hunting and trade in their body parts. We urge the South African government to act and urgently move forward with its decision to eliminate the industry.”

Four Paws is calling for the ban on all commercial trade of big cats and for the complete ban of human activities around big cats (such as cub petting and lion walking), and any commercial use of the lion parts (bones, teeth and claws).

The draft policy, on which the deadline for comment has been extended, has policy objectives that aim to halt the exploitation of lions and shut down breeding facilities.

We fully support the draft legislation. It’s a much more sustainable approach to wildlife.”

Released into a sanctuary

According to the team at Four Paws, during the release at the sanctuary, Samson quickly jumped out of his transport crate while Tom calmly walked out to explore their new environment. Four Paws said the pair will live the rest of their lives in a species-appropriate enclosure, with positive stimulation, good veterinary care and diets that are nutritious for their species.

Born explained that the problem with lion parks like the one Tom and Samson came from isn’t that the lions are mistreated or abused, but that they get minimal enrichment.

“They get put out into these smaller enclosures because obviously they want the tourists to see them, to take photos,” said Born, estimating Tom and Samson came from an enclosure that was only several hectares wide, most of which is thicket.

Some would argue these tourist parks stimulate the economy.

“It does bring money into the economy,” says Born, “but I mean, there’s more ethical ways to show lions. You can build much stronger enclosures, you can give them much more space. So they’re doing basically the bare minimum to keep these lions. And it’s not a safe situation for anyone, it’s not a safe situation for tourists, for the workers, and especially for lions.”

Born says there need to be much higher standards for the parks and for the care of lions. “More than just giving them a place to stay and food, it needs to also be the mental aspect of it, it needs to be the supplementation, the veterinary care… all of that has to be considered.”

Right now Tom and Samson are in an adaptive enclosure at Lionsrock until they get used to their new environment.

In about a week when they’re more settled they’ll be released into the larger enclosure — about 125m in diameter.

Born is not sure if it will happen with Tom or Samson because it has been just the two of them for so long, but usually the next step would be to release them into a larger enclosure with other lions in a few years.

These lions can never be released into the wild, for many reasons including the fact that being inbred means their genetics would harm the wildlife population.

Lionsrock site manager Hildegard Pirker says they’ve saved more than 100 big cats from zoos, circuses, breeding facilities and other atrocious conditions worldwide, and every release is a nerve-wracking experience because, “The animals don’t know why they’re in the crates, and when they are finally released, they have so many new sights and smells, it’s all new to them.”

Born says that hopefully, sanctuaries like Lionsrock won’t have to exist in two decades.

“I just think we shouldn’t have any captive lions. Even though Lionsrock has the highest care, this isn’t the natural situation for them.”

Born says the next few years are going to be interesting regarding what will happen to the 12,000 lions that are in the same situation because there are not enough sanctuaries to take them in.

“That’s something the government’s going to have to really think hard about because they are the ones that created this problem; they need to find some sort of solution.