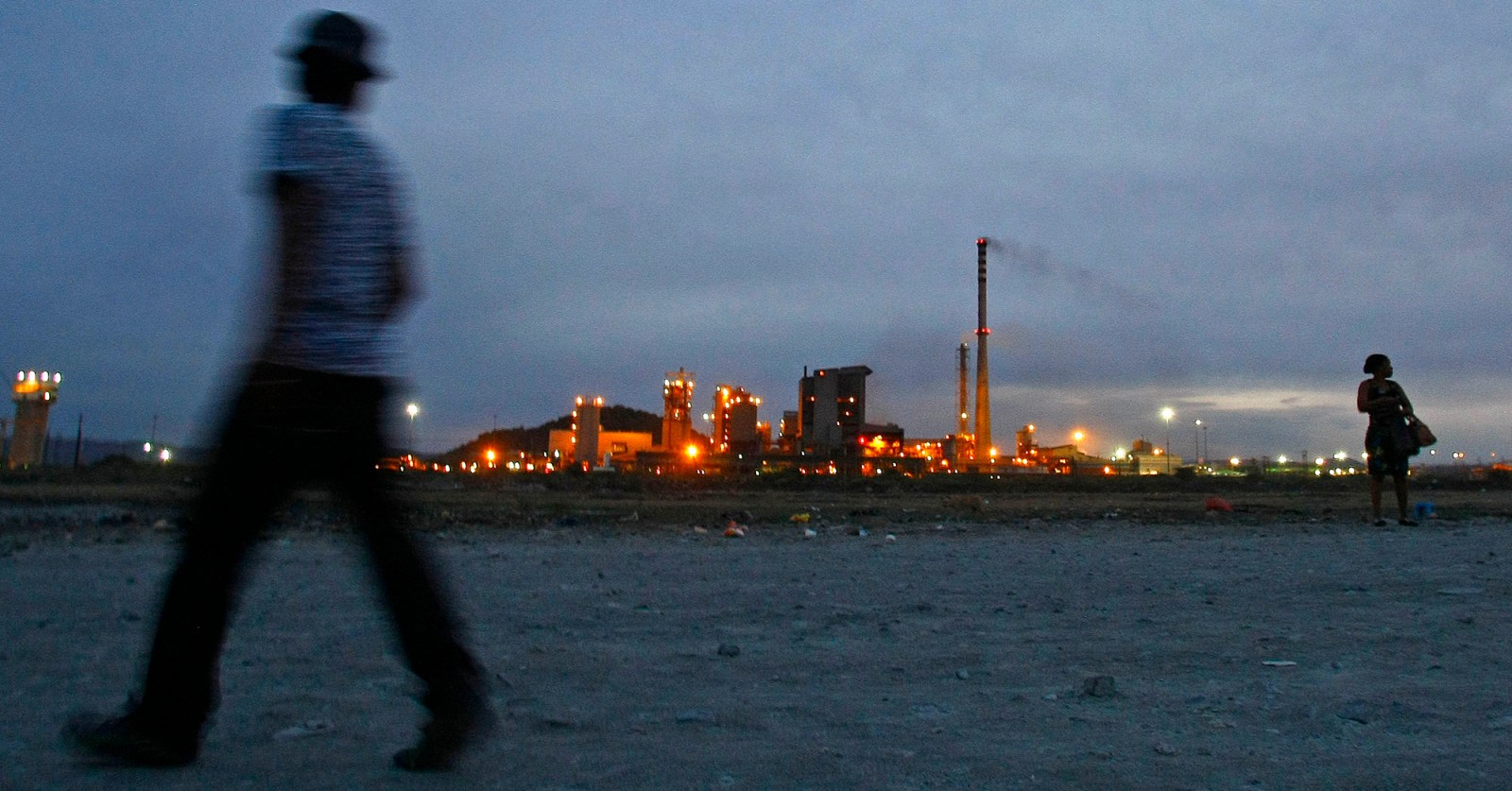 The Marikana mine in Rustenburg, North West. Mining companies are seen routinely as a vulnerable fixed investment and thus prey to be extorted before the resource runs out. (Photo: Kevin Sutherland/Bloomberg via Getty Images)

Africa could be, in mining, the continent of tomorrow. But it always will be just that if governments go about managing mining companies in a predatory fashion. Instead of engaging the sector as a long-term developmental partner, many African governments take a short-term, predatory approach, playing to populist rhetoric.

With nearly one-third of the world’s known mineral reserves, and with society poised at the point of an energy transition, Africa should be the site of a 21st-century bonanza.

The continental treasure chest is as well-stocked as it is diverse, with 40% of known gold reserves, 23% of titanium, 80% of phosphates, 90% of chromite and 80% of platinum, a quarter of all manganese, more than 60% of gem diamond reserves, more than half of the world’s cobalt, and oil and natural gas stores making up 12% and 8% of the world’s reserves.

This stock explains the dependency of a number of African countries on the commodity sector. In 2015, for example, mining constituted more than 70% of African exports, 28% of the continent’s combined GDP, and about 42% of all government revenues. Dependency on commodities has risen in key producers during this century. In Botswana, the contribution of mining to total exports has increased by more than 10% to 91.5%. In the Democratic Republic of Congo this dependency increased from 72.4% to 91.1%, in Burkina Faso from 8.2% to 76.6%, and in Guinea from 76.3% to 82.6%.

More is promised by the rise of digital and green economies and their demand for rare earth minerals, coltan and copper, among other commodities. The African Development Bank estimates that by 2040 Africa’s natural resources and extractive industry will contribute more than $30-billion annually to government revenues.

Africa could be, in mining, the continent of tomorrow. But it always will be just that if governments go about managing mining companies in a predatory fashion.

Instead of engaging the sector as a long-term developmental partner, many African governments take a short-term, predatory approach, playing to populist rhetoric in their desperation for revenue and private resources in targeting the industry with high-tax regimes, among other “redistributive” mechanisms. As a result, mining companies that – if properly engaged – could become long-term developmental partners, are often subjected to substantial meddling, corruption and serial rent-seeking. And yet, communities around mines are primarily reliant on mining firms, a responsibility usually surrendered without a care by the state.

With this usually comes attendant calls for increased value addition and beneficiation. While these are not wrong in and of themselves, these calls are usually misguided, vague or incomplete. They usually fail to consider the extent to which mineral ore is already beneficiated. For example, Kansanshi, the largest copper mine in Zambia, is estimated to use 340,000 litres of diesel each day to mine 82,000 tonnes of ore feed (and 290,000 tonnes of waste), from which just 560 tonnes of copper are extracted. The mine produces about 200,000 tonnes of copper (and more than 120,000 ounces of gold) annually – all of which go through extensive processing that includes crushing, electrowinning – the process of extracting the copper from the ore – and smelting before transport.

In 1972, the year that Lusaka nationalised its mines, Zambia produced more copper than Chile. Today Chile produces more than five million tonnes; Zambia has battled its way over the intervening 50 years to about 700,000 tonnes. Whereas Chile, where three-quarters of its copper is exported as relatively unrefined concentrate, has increased its wealth per capita nearly ninefold, Zambia has managed a threefold increase. Put differently, Chileans are, on average today, nine times wealthier than Zambians.

The message is clear: policy stability and governance matters in allowing the mining companies to get on with what they are good at – mining.

Clamours for increased local beneficiation are not unexpected, given the need to create jobs for Africa’s burgeoning population. Still, these demands have to be reconciled with the availability of cheap electricity, domestic and cost-competitive manufacturing opportunities, visa policies that attract and allow the needed expertise, and policy stability. It is also not the responsibility of the mining companies, but rather the state, to create a conducive environment to attract the industrial sector that can feed off their products.

There is no gainsaying the difficult spot in which governments find themselves. More than half the populations of those African countries that are overwhelmingly dependent on the extractive sector live on less than $1.90 a day. The World Bank has found that in these sub-Saharan African countries, an increase of 1% growth in consumption causes a reduction in poverty by 0.69%. In other settings, this can be as high as 2%. The difference is down, in part, to the source of Africa’s growth – primarily the extractives (mining, oil, gas) sector, rather than more job-intensive agriculture, manufacturing or tourism. And given its captured physical situation, it is little surprise that the mining sector is a tempting personal piggy bank for elite gouging at the expense of the public – a “win-lose” scenario.

As Africa’s population doubles over the next generation to 2.5 billion, the continent has to learn to better manage all possible sources of growth. Constricting growth is not an option for the 472 million Africans, representing 67% of the world’s poorest people, who live under the global poverty benchmark.

The opportunity, then, for the mining sector to be a developmental partner is hardly one to ignore. Yet, these companies are seen routinely as a vulnerable fixed investment and thus prey to be extorted before the resource runs out. This explains why Zambian mining companies, for instance, have been subject to more than 20 tax regime changes in the past 20 years, slicing and dicing business margins, destabilising revenue calculations and reducing investor confidence.

Capital is, after all, a coward; it does not take unnecessary risk and only stays where it is well treated. Trust needs to be re-established in the government-business relationship, and the outcomes of the existing vicious cycle around mining recognised, broken and replaced with a virtuous one that operates with common interests for the good of all involved, including and especially the general population.

Of course, mining companies have to play their own part: recognising government’s myriad pressures, collaborating in trying to procure as much locally as possible in building local services and industry, and thinking long-term with regard to social investments in education, healthcare and the environment.

Securing revenue streams and getting more value from mining in Africa will require moving from a series of ad hoc actions, influenced by short-term political interest, to a more cohesive, inclusive, and strategic approach. Key here is, first, changing the narrative, from one simply around a fiscal take to overall developmental impact. For example, employment does not end with the jobs in the mines. For every direct job in mining, three to five indirect jobs are created. Similarly, for every $1 generated by mining, $3 is generated elsewhere in the local economy. Likewise, each million spent on corporate social investment positively affects 20,000 lives. And then there is a ripple effect of mining, in terms of local PAYE and spend on goods or services.

Without such a “win-win” partnership, only one conclusion is possible: a steady contraction and shrinking of Africa’s mining industry even as it expands elsewhere, with the losers being governments, mining corporations, present and future workers and surrounding communities.

It is not hard to imagine how to do it more positively: avoiding arbitrary government intervention and policy flip-flopping, which goes some way to producing consensus around a predictable and competitive policy and tax regime, thus encouraging a long-term investor view, increased employment and higher growth.

This way, the extractive sector can be a source of inclusive growth. DM

Dr Greg Mills, the author of the recently released Expensive Poverty, and Marie-Noelle Nwokolo are with the Johannesburg-based Brenthurst Foundation.