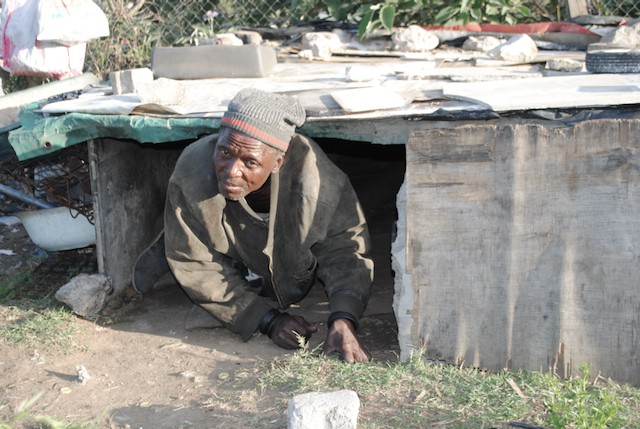 Sandile Mngweba, 61, crawls out of his hovel in Soweto informal settlement in Mthatha. He says since his eviction in 2012, 'life has been difficult for me. For all these years I have been crawling like a dog into this dog kennel of mine.' (Photo: Mkhuseli Sizani)

About 255 people live in dire circumstances in ‘Soweto’ informal settlement in Mthatha after they were forcefully relocated in 2012.

Over 250 residents of Soweto informal settlement in Mthatha have taken the King Sabata Dalindyebo Municipality (KSD) to the South African Human Rights Commission (SAHRC), they say, for subjecting them to inhumane living conditions.

They also allege that the municipality duped them into believing they would get RDP houses.

The community lives in squalor, mostly in 15 bungalows in and around an old mechanical workshop. They live by scavenging for food in dirt bins and waste picking for recycling.

The residents are the remnants of a much bigger eviction carried out in May 2012. They say they were evicted illegally from Tipini, an old dumpsite near Waterfall Park. Some had been living there for decades. Their shacks were demolished by the municipality and then torched by neighbouring Waterfall Park residents.

“No councillor or municipal official wants to help us here. All of them say they don’t recognise us,” said Mthetho Ndlela, chairperson of the Soweto informal settlement committee. “In July we filed the case at SAHRC in East London and reported this municipality for subjecting us to these inhumane living conditions.”

He said they want the municipality to return them to Tipini, “where we had shacks, schools, clinics and water”.

According to Ndlela the Tipini land has stood undeveloped and unoccupied since their eviction.

The 15 crumbling bungalows they share have become so crowded that some of the elderly have moved to makeshift shelters that they describe as “dog kennels”.

An old dilapidated mechanical workshop building nearby is used as a toilet, although this building is also home to some of the residents.

The place is strewn with uncollected garbage. There is no electricity and they cook on open fires when they have food to cook.

The parents of 13 children, aged between five and ten, are not letting their children attend the nearest primary school in Waterfall Park, because two children were run over and killed. According to Tshatiswa Nophondo, her nephew, Lisekho, was killed in January 2018 by a truck. Nomgcobo Nkampani said she lost her daughter, Yamkela, aged five, in 2017 when she was run over on her way from Ezra Primary School.

“The municipality did not even organise scholar transport for our children. Now we are scared to let them go to school because of the speeding vehicles,” she said.

Ntombikayise Ngquka, a mother of two, says she left school at grade 8 because of the Tipini eviction. “I am worried my children will be illiterate just like me,” she says.

Twenty children from the community have been taken into care by social workers to the distress of their parents.

Most of the adults lack basic education. About 25 of them do not have their SA identity documents.

No one in the community has been vaccinated against Covid-19.

We asked some of the residents if they will vote in the upcoming election. They said yes but not for the ANC.

Replying on 20 August to the SAHRC, KSD Municipality manager Ngamela Pakade wrote that in May 2012 there was conflict amongst the Tipini community and neighbouring Waterfall Park and Mdlekeza Park. Lives were lost and drastic measures had to be taken, “hence the re-location of the Tipini community”.

He said ablution facilities, one for males and one for females, a high mast light, and a standpipe were provided. “In addition, 48 temporary shelters were also provided by the Provincial Human Settlements,” said Pakade.

The residents tell a different story.

Noluthando Mbambo, the community’s committee secretary, said: “We were about 3,500 [shack] households in the Tipini area. But in 2012, the municipality and police arrived and ordered us to leave our area within seven days.”

Mbambo said Waterfall Park residents “blamed us for all the crimes in their area”.

The community alleges that because they are illiterate the municipality had them sign papers under false pretences. They thought they were applying for RDP houses. “Three months later they came back and told us that when we signed those forms we were agreeing to be taken back to our places of birth,” said Mbambo.

The other evicted Tipini residents scattered to various places, some back to rural homes or other locations in Mthatha. The 48 temporary structures the municipality had provided were taken by families who went to rebuild their lives elsewhere.

“I have a family of six and I share a bungalow with another family of five … They are sleeping in the kitchen,” said Mbambo. “There is no privacy.”

She said 25 people who are elderly and some of them with disabilities have no IDs and do not get the social grants they are entitled to access.

“We have no toilets and we use this dilapidated building opposite our bungalows as our toilet. But some of the people are sleeping there,” she said.

“From dawn till dusk I have to collect boxes and empties from shops and dirt bins in order to resell to buy food.

“Since 2012 I have been living like this. I couldn’t share a bungalow with strangers because I need my own privacy … This dog kennel of mine is very cold and is leaking … When I die, I will die like a dog because I have lost hope of ever getting my RDP house.”

He has no ID and does not collect an old age grant.

Mncedisi Galada, who is 70, said: “Ever since the police demolished our homes it has been difficult to make ends meet. I wake up before the sunrise and rush to town and scratch for food in dirt bins. It is not easy because there are many of us from different areas who are also scratching for food in dirt bins. I did not get much food today because Sundays are always quiet.

“I am illiterate and I was born disabled. I don’t even know where to start and apply for an ID in order to get a social grant because nobody cares about us.”

According to Pakade the municipality never promised the community houses.

“In September 2020 a visit was undertaken by the municipal leadership. It was noted that the community was larger than the numbers that the municipality had used in their planning. The submission revealed 255 people,” he said.

He said that the municipality has requested funding for houses from the Department of Human Settlements, which is considering the request.

Advocate André Gaum, SAHRC commissioner, said, “We are going to convene a joint meeting with the municipality and the complainants … But no date has been set yet.” DM