Benjamin Tyamzashe: The man, his God, and music 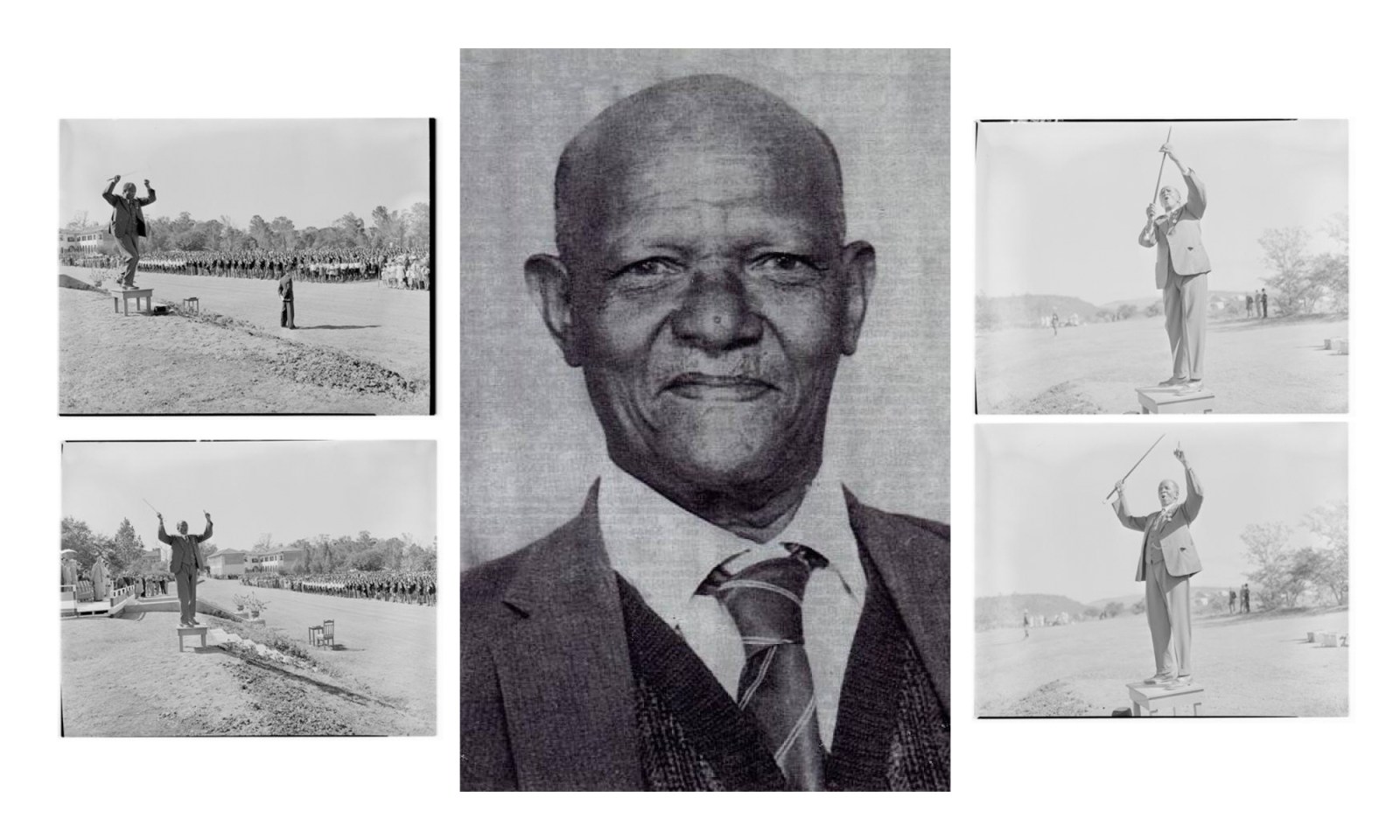 As was with Xhosa prophet, evangelist and hymn writer Ntsikana and journalist John Knox Bokwe before him, Benjamin Tyamzashe’s journey coincides with his African ancestry and culture, together with his spirituality and also music composition, both Western and traditional, that preserved the goings-on of the time.

As we constantly drive ourselves to celebrate our cultural pioneers, bringing to life the man, his God and his music is a healthy exercise. There are fundamental links and idiosyncrasies between the Western influence of archiving traditional Xhosa music and choral/worship music. This man was able to transcend the two schools of thought, I argue.

Also known affectionately as B-ka-T, as ethnomusicologist David Dargie alludes, Tyamzashe was the son of a congregational minister in South Africa and a prolific composer of more than 200 works. He followed in John Knox Bokwe’s footsteps in adding innovations to the makwaya style of singing, a choral form often sung by large groups in church and civic settings.

This very same innovation was and still is criticised fundamentally for the apparent handicap of not being proper as far as Western classical notations are concerned even though its creators were partially educated in such. A trend that carried on in music circles till the present day, where African master musicians are deemed not “proper”, yet the standard is flawed, and this is the eye of this opinion piece.

Tyamzashe was educated at Lovedale College in Alice, eDikeni, Eastern Cape; this also happens to be my place of birth and primary instruction. This reading thus is very integral in comprehending the writer, subject and, verily, article.

He was born to an African Christian convert father within the United Freedom Church of Scotland, and a Scottish-French mother. His rudimentary skills were, not surprisingly, printing and journalism, as the primary tool of exploration that the British brought was the printing press, which would churn out thousands of Bibles translated, re-scripted and published under the Lovedale Printing Press. The first of its kind in 19th-century sub-Sahara (or so history tells us).

In 1796, a proposal was presented to the General Assembly of the Church of Scotland to begin overseas missionary work. Despite strong support, the proposal was defeated on the resolution. Du Plessis in 1911 notes:

“To spread abroad the knowledge of the Gospel amongst barbarous and heathen nations seems to be highly preposterous, in so far as philosophy and learning must in the nature of things take the precedence: and that, while there remains at home a single individual without the means of religious knowledge, to propagate it abroad would be improper and absurd. The origins and early development of the Scottish Presbyterian mission in … ”

And this in spite of an earlier decision to encourage the collection of funds for work among American Indians. Du Plessis attributes the formation of voluntary missionary societies to this disinterest on the part of the church. This is true of the genesis of the Scottish mission.

However, Hewat (1960) points to the poverty of the Scottish nation rather than disinterest as the reason for lack of action in this regard. This is supported by the further decision of the General Assembly to pray that God’s promise be fulfilled “in giving His Son the heathen for His inheritance” though it was deemed highly inexpedient at that time to accord such ventures financial support. It further agreed that it would “embrace with zeal and thankfulness any future opportunity of contributing by their exertions to the propagation of the Gospel of Christ which Providence may hereafter open”. Those who were motivated to inaugurate a world mission approach therefore had to find a way to do this outside the formal structures of the church. Hence, the growth of voluntary societies.

A certain Joseph Williams was the chief evangelist. He would be a great influence to the Nguni nations as a whole, but initially amaXhosa and in particular Tyamzashe and other influential amaXhosa in the royal kraal of the Gcaleka and Rharahbe who became accustomed to British rule by 1835.

Below are a few lines of a translated rendition of the song Ntsikana composed upon his conversion.

According to many scholars and in particular Hodgson, the singing of the Ntsikana’s Bell is a celebration of the heritage of black theology in South Africa, not just acknowledgment of the European god.

One has to go beyond the memories of KwaNoCollege, Healdtown, Lovedale and Lovedale Press, where the Holy Bible was first translated into Xhosa; if we are to critically reflect on the arrival of the settler communities, missionary education and the converting of the red ochre from his body in the Gqora River. Ntsikana’s services were popular and he attracted many hearers among the amaNgqika, but his disciples were comparatively few; Tyamzashe emerges as one of these hearers posthumously of Ntsikana obviously. The legacy lived on through the missionary institutions and got to him.

His early life is all but draped in European settler tutelage. By the early 1900s, close to 100 years of British missionary work had flooded the Cape region, the sprout being the 1820 settlership in Grahamstown, which was the Trojan effect that opened the way for voluntary missionary groups to enter the region with purpose. Lovedale College was founded by such men.

He finds himself in Alice from 1905 to 1909, studying towards a Primary Teaching Diploma after completing his schooling at Peelton Mission School in 1904. He started his teaching career while still a student at the college, because of his guile.

This is where his music, his god, started molding the man, as a member of the Lovedale Choir. The influence of European music and religion on Xhosa culture by the early 20th century was evident in the socio-cultural spaces where it impacted the locals at the time. Through earlier mentioned missionary work primarily, European forms of worship were fundamentally sanctioned by the traditional leaders of the time in their kraals and dominions, in particular Chief Ngqika.

From the age of 10 years, Tyamzashe has been in the privilege of being exposed to traditional folklore Xhosa music, and classical Western music, through his primary schooling in a missionary station. It was when he was at the Tiger Kloof Educational Institute in Vryburg, however, where he was leading a choir, that his interest in music was enhanced.

It is highly noted that his composing career started at this time (1913 to 1924), during which he also obtained a degree from the Tonic Sol-Fa College in London with distinction. This degree included instruction in sol-fa notation, elementary harmony, counterpoint, form and style via correspondence, with nothing short of distinction. Hansen says Tyamzashe’s music was almost entirely Western-influenced even though, as earlier mentioned, he was exposed to traditional Xhosa music from an early age, too. It was only from 1947, it is notable, that Xhosa traditional folk music started becoming recognisable in his compositions through the incorporation of Xhosa idioms, rhythms and melodies.

When the British missionaries embarked on their conquest of evangelism, they brought the liturgical and musical essentials, tools of their trade, so to speak; their congregational hymns.

European hymnody is constructed on a four-part basis in which a dominating melodic line, so to speak, prescribes harmonisation. This is totally at variance with the Bantu technique of harmonisation in which a melody is freely embellished and intensified by additional voice-parts, the number depending on the number of singers.

The British major-minor concept, tonality and modulation were equally foreign to Tyamzashe and other Xhosa nationals who were now in the missionary congregation halls. The problem became even more complicated when the texts of the hymns were translated into the language of the people, in this case Xhosa. There soon became evident the incongruity in the relationship between the rhythm of the texts and the melodies.

This is where Tyamzashe’s ingenuity through his love of music, worship and God emerged with his compositions through the incorporation of Xhosa idioms, rhythms and melodies, using his sol-fa notation, and innate traditional flair. He created his versions of Ntsikana’s Bell in his compositions, Ingqobhoko enobuchule. This was surely going to be a point of contention by the all-knowing, learned classical British scholars of choral music and sol-fa notation, to the point of attempts to null and void Tyamzashe’s compositions as pure choral music.

Regardless of the blacklisting from pompous, all-knowing European appropriators of intellectual property, Tyamzashe stands tall among giants of not only traditional folklore music, but choral and innovative music fusion, a colossal figure in the 20th-century development of African choral music. And we, as inhabitants of eDikeni and products of its cultural history, honour him. DM/ML

Sibusiso Lundi Mnyanda is a writer, historian, and broadcaster originally from Alice in the Eastern Cape, now based in Johannesburg. He has a background in performance arts and curriculum development at the University of Fort Hare, where he read philosophy, history, and isiXhosa linguistics. He has also freelanced across fields in entertainment & branding, communications & social media marketing, as well as sports broadcasting. He now works as a Reseacher for Music in Africa as well as an Executive  Producer for Ubuntu Beats Radio Fm, an online radio station based in Johannesburg.