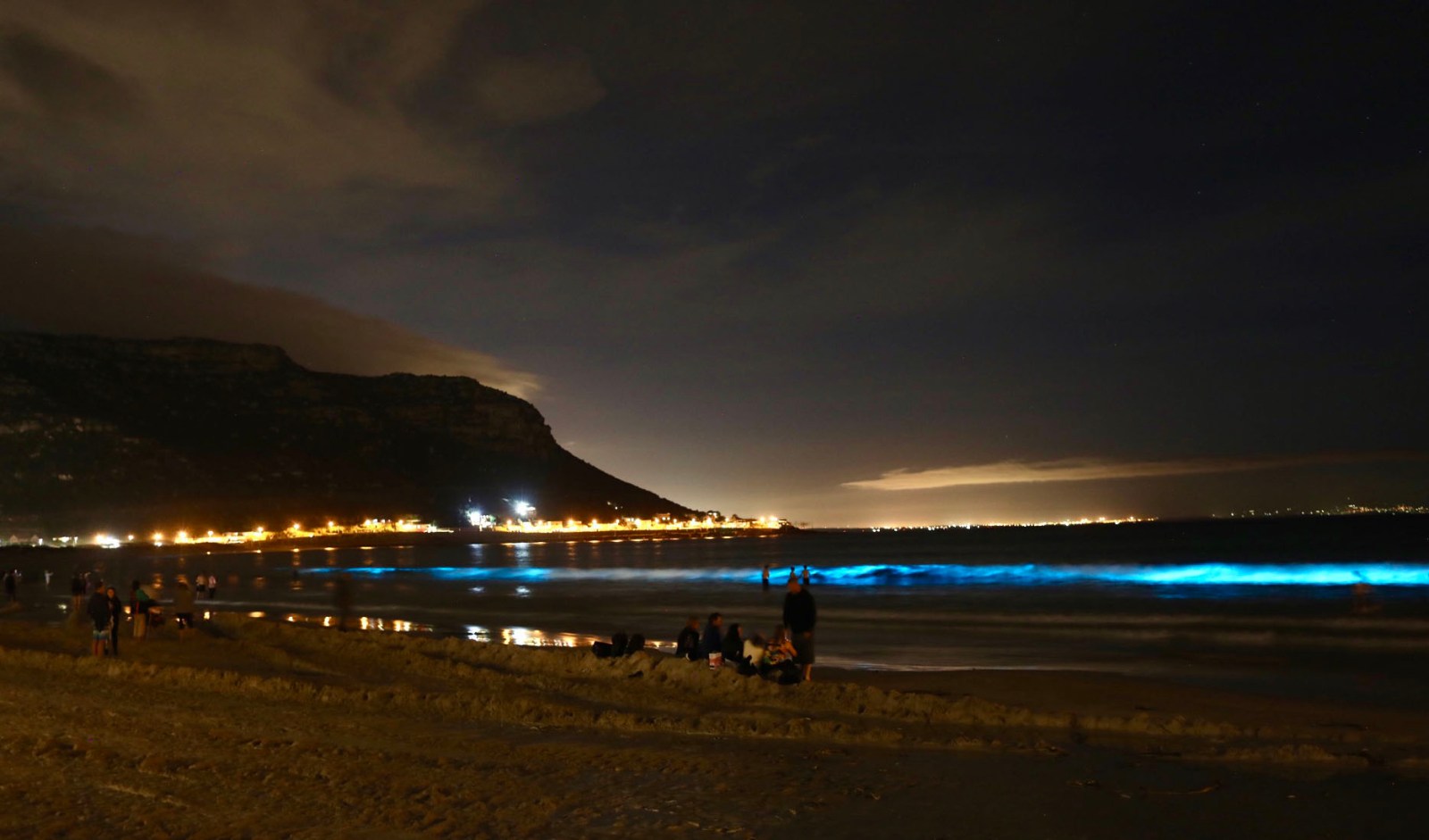 Last week Capetonians enjoyed some spark to their beautiful oceans as nature took its course and lit up the ocean along the west coast.

Cape Town beaches lit up in blue with a natural phenomenon called bioluminescence – light from a living organism – on Tuesday 12 October.

The occurrence on beaches, however, is called marine bioluminescence and caused by phytoplankton accumulation as a result of a disturbance in the water, such as a wave crash or splashing.

The glowing blue colour, which is visible at night is mainly due to the phytoplankton being in sync with wavelengths where light travels furthest through the water, according to Dr Marié Smith, a marine remote sensing (satellite) specialist at the CSIR.

During the day, the phytoplankton accumulation gives the water a murky red appearance, called red tide. According to Dr Smith, the marine plankton around False Bay and Hermanus, which causes the blue luminescence, is actually a red organism (heterotrophic cell). The cell, which is generally found in South Africa, feeds on other organisms, unlike green phytoplankton which photosynthesize and produce their own food.

According to Dr Ffion Atkins, postdoctoral research fellow at the University of Cape Town, red tides are a natural phenomenon common to coastal bays. On the west coast of South Africa, the tides are common in areas such as Elands Bay and St Helena Bay.

“On the West Coast for example, an ‘ecological window’ is usually towards the end of summer, when conditions are consistently calm for several days with very mild onshore winds and warmer temperatures. What we saw in Fish Hoek was preceded by a few days of minimal to very gentle onshore winds and warm temperatures – a good ecological window,” Dr Atkins told Daily Maverick.

Dr Atkins added that the light winds allow the phytoplankton to accumulate in the bay, whereas stronger winds would have caused too much turbulence for the particular species to bloom.

In terms of the rareness of the visible phenomenon, Dr Lisl Lain, researcher in earth observation at CSIR, told Daily Maverick that when conditions are favourable, the phytoplankton will tend to bloom. This is whether or not they are visible from the shoreline. “The intensity of [the bioluminsescence just depends on how many there are at any one time in any one place. So it’s not a super rare phenomenon, but the visibility from shore just means that it’s more spectacular,” Dr Lain said.

The researcher added that the phytoplankton drop down during the day and in the evening will rise up to the surface and re-emit the the collected light from the day. Dr Lain continued that because the phytoplankton can also reproduce asexually, they put out all their evolutionary stops when the perfect conditions align, maximising their growth.

Dr Smith added:  “If these blooms occur in large enough volumes, they can cause harm to marine life through oxygen depletion, the production of ammonia, and clogging of the gills (because of its relatively large cell size),”

Dr Atkins added that in large volumes the phytoplankton blooms can be problematic as they can decay and sink to the bottom, depleting oxygen, which can cause lobster stranding as often seen in Elands Bay.

Beach and ocean environmentalist Aaniyah Omardien told Daily Maverick that during a night swim, one of the friends she was with noticed the bioluminescence first as they paddled the ocean water in Smitswinkel Bay between Simon’s Town and Cape Point Nature Reserve.

Omardien said she and her friends were joyful from swimming at night, and encountering bioluminescence by surprise was astounding. “This blue light; amazing electric blue light!” she said. “And of course seeing it at night enhances that colour, and we got all excited and kept swimming and moving our hands to create the spark so that we could see the electric blue.” DM/OBP/ ML