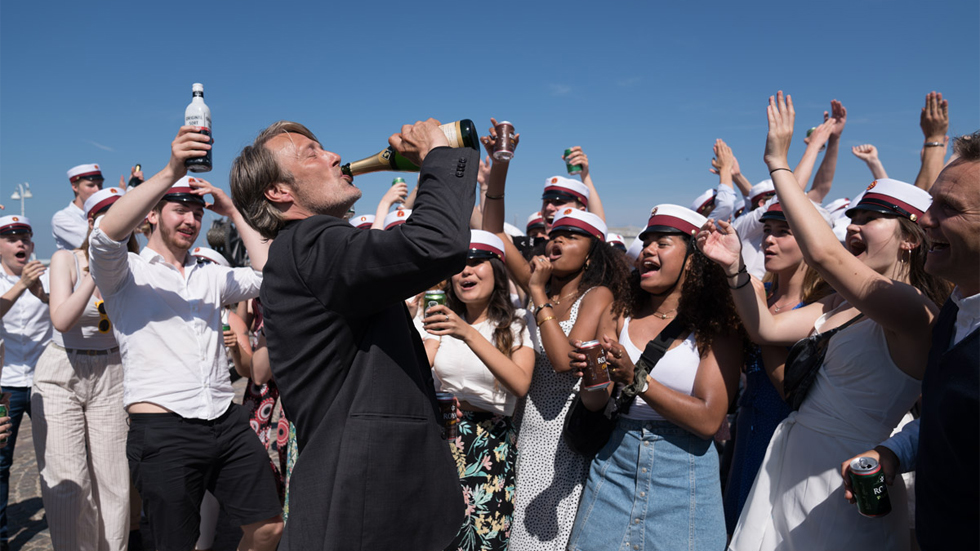 Another Round, directed by Thomas Vinterberg. Image: Henrik Ohsten

‘Another Round’ is an Oscar-winning Danish comedy drama starring Mads Mikkelsen at his best, which both celebrates and rebukes drinking culture.

At any given moment, someone somewhere is reassuring themself that the glass of wine or two they’ve been drinking daily is actually good for them. Maybe it is, maybe it isn’t, but they’re not really interested in the science, are they? Better to enjoy a (supposedly) moderate glass of pinot noir and feel good about it, than examine the issue and risk admitting they’re a soft-core alcoholic.

Director Thomas Vinterberg pushes this mode of thinking, and indeed this particular example, to the extreme in his 2020 comedy-drama which won Best International Feature Film at the most recent Oscars, as well as a BAFTA and several other awards. The film’s original Danish title is Druk, meaning binge drink (Afrikaans speakers will be familiar with the word) but it was circulated under the name Another Round to international audiences. It’s rare that a translated English title has more metaphorical depth than the original one. This is one of those cases, though we won’t go into the details of that for fear of spoilers.

Mikkelsen plays Martin, a stoic history teacher whose apathy has dragged him into a mid-life crisis. Unable to muster enthusiasm for his job, his class is complaining about him. His relationship with his kids is stilted and his marriage has fallen prey to dull routine and stagnation.

Martin is languishing passively in self-pity, close to giving up, when Nikolaj, one of his colleagues, slightly pissedly recounts a theory that humans are born with an alcohol deficiency. Nikolaj explains that Norwegian psychiatrist and psychotherapist Finn Skårderud believes people are born with a blood alcohol level that’s 0.05% too low, and should strive to maintain 0.05% BAC (a glass or two of wine) throughout the day.

It goes without saying that this is nonsense, but it should be said that Skårderud doesn’t even make this claim. The film never clarifies that the “Skårderud hypothesis” as Nikolaj terms it, is fake news – confirmation bias coupled with willful ignorance.

But Martin is at rock-bottom and willing to try anything. Nikolaj claims that keeping himself buzzed throughout the day could make him “more relaxed, poised, musical and open. More courageous in general”. After 25 minutes, we get what we came for – a generous swig of vodka in a staff-room toilet stall.

Off we go. Before long, Martin and his little crew of middle-aged Danish school teachers are religiously day-drinking under the amusing delusion that it will solve all their social and professional problems rather than exacerbate them. “We’re testing out the Skårderud hypothesis”, they say.

Martin rapidly becomes livelier, funnier and more creative, and what do you know, the class is smiling. His character development is a joy to watch. Initially he is lethargic and forlorn and as he starts drinking his behaviour becomes ambiguous and spontaneous. Mikkelsen’s screen presence makes even a tired, quiet character entertaining, but his transformation is particularly fun to watch.

Like a European low-key version of Robin Williams in Dead Poet’s Society, Mikkelsen gives us the tried and tested trope of the charismatic teacher who inspires a group of young people using unorthodox methods, and we take on their inspiration and excitement.

Alas, with his newfound confidence comes narcissism, poor judgment, and the need for constant reaffirmation of his dangerous habit. Martin and his colleagues constantly reference famous and talented alcoholics like Hemingway, Churchill, and Theodore Roosevelt as “proof” that they don’t have a problem. There’s even a random montage in the middle of the film with footage of famous politicians drinking alcohol or being drunk.

For a film about drinking culture, Another Round is unusual in that it doesn’t take the obvious cautionary stance. The serious bits warn of the dangers of drinking culture while the comedic bits benefit from it and sometimes even celebrate it. The film begins with spotty-faced highschoolers getting drunk on youth (and stupid quantities of beer). They stumble about raucously, climbing streetlights, kissing old ladies on the train and handcuffing the inspector to a handrail; and it’s all framed with a reminiscent affection – their recklessness is romanticised.

Vinterberg lost his 19-year-old daughter in a car crash a few days into filming, and this compelled him to make a more life-affirming and optimistic film than he had planned to. Another Round has a wide emotional range, but the impressions that endure are naughty, playful joy and a confusing but still pleasant serenity, embodied in a contemporary dance performance by Mikkelsen, who is a trained gymnast and dancer.

While no less engaging, the trajectory of most of the plot is pretty straightforward, with the exception of the very end. The journey runs its course well, and then just before reaching one of a dozen of the more obvious destinations that present themselves, Vinterberg turns us around and starts marching back in the direction he’d come from.

A bunch of middle-aged Danish school teachers drinking exclusively during working hours seems like such a silly premise; the film ran a great risk of being gimmicky, but it isn’t. The comedy is sensible and subtle – you’ll find much less slapstick than you might expect. Vinterberg’s mixed messaging around alcohol is more puzzling than the commonplace black and white narratives we’re more accustomed to, but as a result, it’s more real and more honest. DM/ ML

Another Round is available for free screening on The European Film Festival 2021 official website between 14 and 25 October .

Curious Kids: Do flies really throw up on your food when they land on it?