INSIDE A CAPE MEADERY

The earthly African origins of the Nectar of the Gods 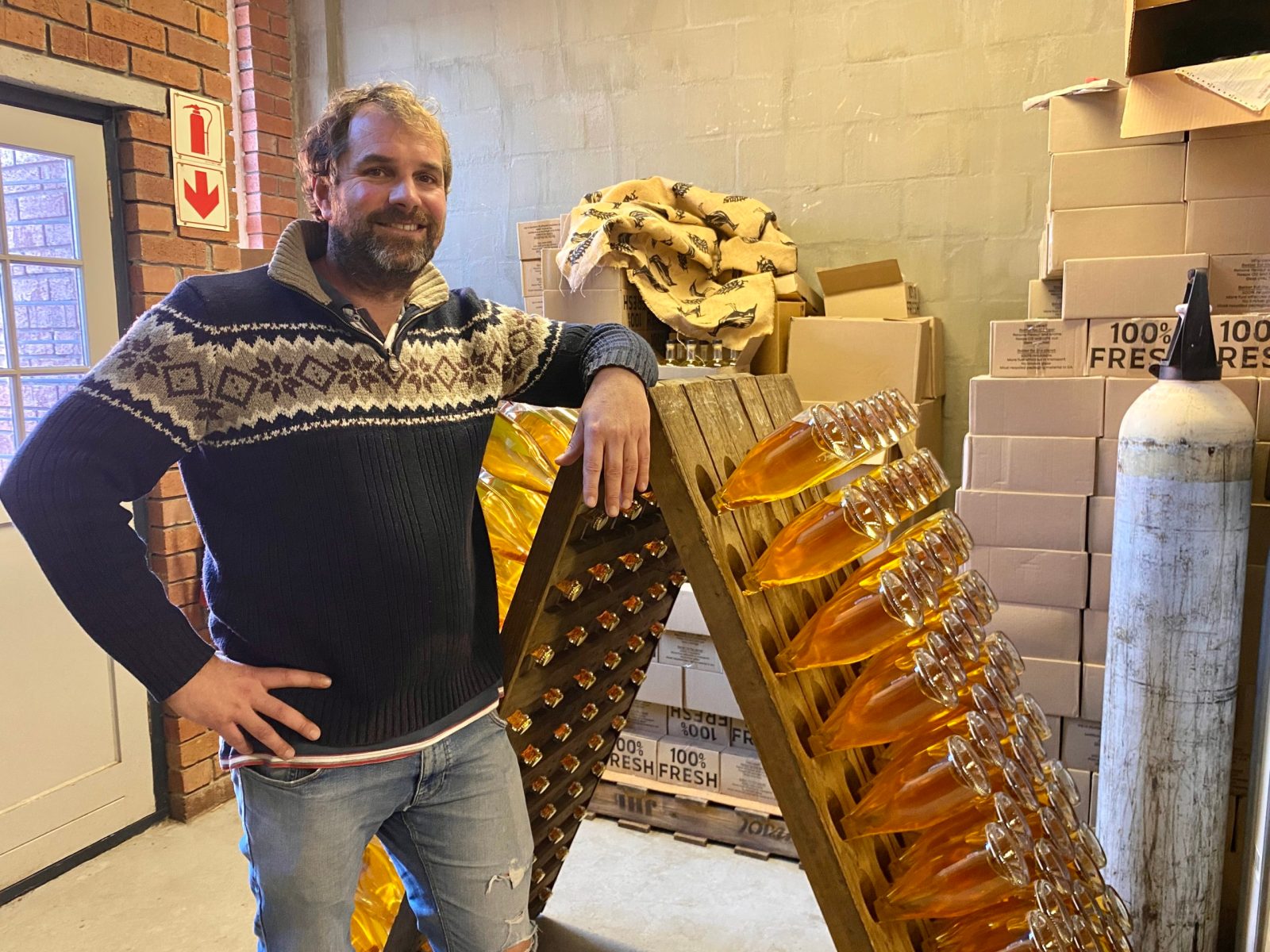 Mead. The Greeks believed it was a heaven-sent dew harvested by bees – messengers of the gods. The Norse thought it was the result of two dwarves murdering a magical wise man, and then brewing his blood with honey…

Mead is essentially an alcoholic drink – not quite a wine, not quite a beer – made from fermented honey. In addition to the kind of honey it’s made from playing a crucial role in its flavour, it comes in endless styles, from fizzy to still and wild to smooth.

Mead’s been around for so long (I’m talking since before the wheel) that it’s not surprising it’s steeped in mythology. However, it’s likely that it has more earthy origins.

“There are arguments about where it came from, but we’re pretty sure – considering bees and honey – that it started in Africa. Probably far south, more towards sub-Saharan Africa,” he says. “What we do know is that it’s the oldest alcoholic beverage known to mankind. It goes back a very long way.”

The African origin story Thompson refers to is the hypothesis that mead was a happy discovery by early Khoesān people, around 18,000 BCE. Writing itself was only conceived between 3,400 and 3,100 BCE, some 17 millennia later, forcing us to rely somewhat on conjecture.

Wild African honey bees make hives in the upper hollows of baobab and miombo trees in the dry season. Under just the right circumstances, the spring rains fill the hives – chasing the bees off – and the natural yeasts on the bark cause the remaining honeycomb to ferment, initiating the most wonderful transformation.

It’s suggested that when wandering hunter-gatherers came upon one of these hives and slaked their thirst, they determined that – much like its previous occupants – the liquid therein created a buzz of its own.

Inspired by this delightful happenstance, the inventive nomads put their minds to replicating the treasure using ground roots as a catalyst for fermentation, and ultimately mead was born.

Knowledge of this alchemy spread across the Dark Continent with the drifters, and eventually into the hearts, minds and lore of the rest of the world.

In time, mead made its way into written accounts too, the oldest potentially being the Rigveda, a book of Vedic hymns penned in India sometime between 1,500 and 1,000 BCE. Here, a ritual drink is described, which – because of the many mentions of ancient gods in connection with honey – scholars speculate could be mead.

The first recorded recipe can be credited to Gaius Plinius Secundus, aka Pliny the Elder, a naturalist and commander of the Roman Empire who effectively invented the encyclopaedia.

In 77 CE, he wrote of a Greek beverage called “water-honey”, which he said was made by “adding one part of old honey to three parts of water, and then keeping the mixture in the sun for forty days after the rising of the Dog-star.”

By now, there were other liquid intoxicants around: those devised from barley and grapes. While Pliny’s formula for mead is straightforward, it seems there was still an air of the divine to it, with its link to the heavens … to the very brightest celestial body in the sky.

Indeed, while ale and wine were the go-tos for general social lubrication and festivity, mead, with its supernatural status, was reserved for ceremonial or special events.

The Vikings, whose golden age was from 800–1,050 CE, certainly imagined that mead was imbued with transcendental potency, and consumed it as such.

“It comes back to the gods as well,” says Thompson. “I think it’s because it was seen as quite a high-end product, like you only drank it for very celebratory occasions, traditionally. The Vikings used to drink it when they came back from war. It was the nectar of the gods, that almost gave you godly powers.”

Across the water, the Celtic Britons and the Anglo-Saxons that displaced them prized mead as well. Here nobles would use the liquid to seal alliances in dedicated mead halls, imbibing it with much pomp and ceremony.

While royals of this era had dedicated mead-makers, called methiers, mead was widely made, and could be purchased by anyone who had the coin for it, to drink as they saw fit. It wasn’t cheap, though. In fact, documentation from King Hywel Dda’s reign (90–950 CE) set the price for mead in Wales to be quadruple that of ale.

Sadly, with global urbanisation, and the Industrial Revolution of 1760–1840 CE in particular, mead making died down. Not only was honey less available in cities, but mechanised extraction meant less leftover honeycomb with which to make it.

Mead was effectively priced out of the general market, being enjoyed exclusively by royals.

“I think the reason mead died out is simply because it was too expensive compared to beer and wine,” Thompson conjectures. “It still got maintained in royal families, however, with the royal mead-maker.”

Now, with the rise of hipster counterculture, and mead featuring in hit series like Game of Thrones, Vikings and American Gods, the honey drink is making a comeback.

“Proper nerds (and I can say that, because I am one) started watching and became fascinated by the idea of mead, and it being so old, and they started doing research and making batches,” explains Thompson.

Thompson – who has a PhD in Nutritional Physiology and a background working with bees – took the hobby a step further, starting an industrial meadery in 2017, bringing mead full circle back to Africa.

“My previous business was actually a company called Beonics, where we did natural antibiotics from propolis, which is also from bees. And at the same time, I used to love making sourdough, my own beers, salami, cheese … all those kinds of things,” he expands.

While mead has exploded onto to US market, things are slow going here in South Africa, so Thomson exports the majority of his products.

“I think there’s a market for mead, but you’re not going to sell a lot in South Africa because of the price of honey. With our Gini coefficient, the top population is so small, who we’re targeting. You need to convince people that mead is up there with the best wines for them to make the switch. We export 90% of our products,” he says.

Thompson’s meadery is one of only two commercial enterprises in the country and, contradictorily, he needs more competition to flourish here.

“The single biggest problem is that there’s not enough. So, the first question I get from most of these liquor stores is, ‘Where do we put the product?’. With only two commercial producers, there are only three or four products, so they’re not going to open a shelf. It’s critical that more people sell commercially.”

Interestingly, mead has always been around in Mzansi, with the Xhosa of the Eastern Cape – descendants of the Khoesān – continuing the !Karri tradition, calling their mead iQhilika. This is generally brewed and consumed at home, with the general population not even really aware of it.

Our claim as the cradle of mead, coupled with our unique flora, creates enormous potential for South African mead to shine on the global stage.

“South African honey is probably some of the best in the world. We’ve got this incredible diversity of plants and flavours we can play with that nobody else has got globally,” Thompson agrees.

Thompson’s two brands include Melaurea Mead Méthode Traditionnelle, a MCC style of sparkling mead, as well as Braggot Pale Ale, a honey beer. He makes them both from sustainably sourced, local organic honey. He also contract brews the Matawi and Van Hunks ranges, which include still, sparking and flavoured meads. DM/TGIFood

To try mead for yourself, drop him a line, or take a look at the stockists on www.melaurea.com.