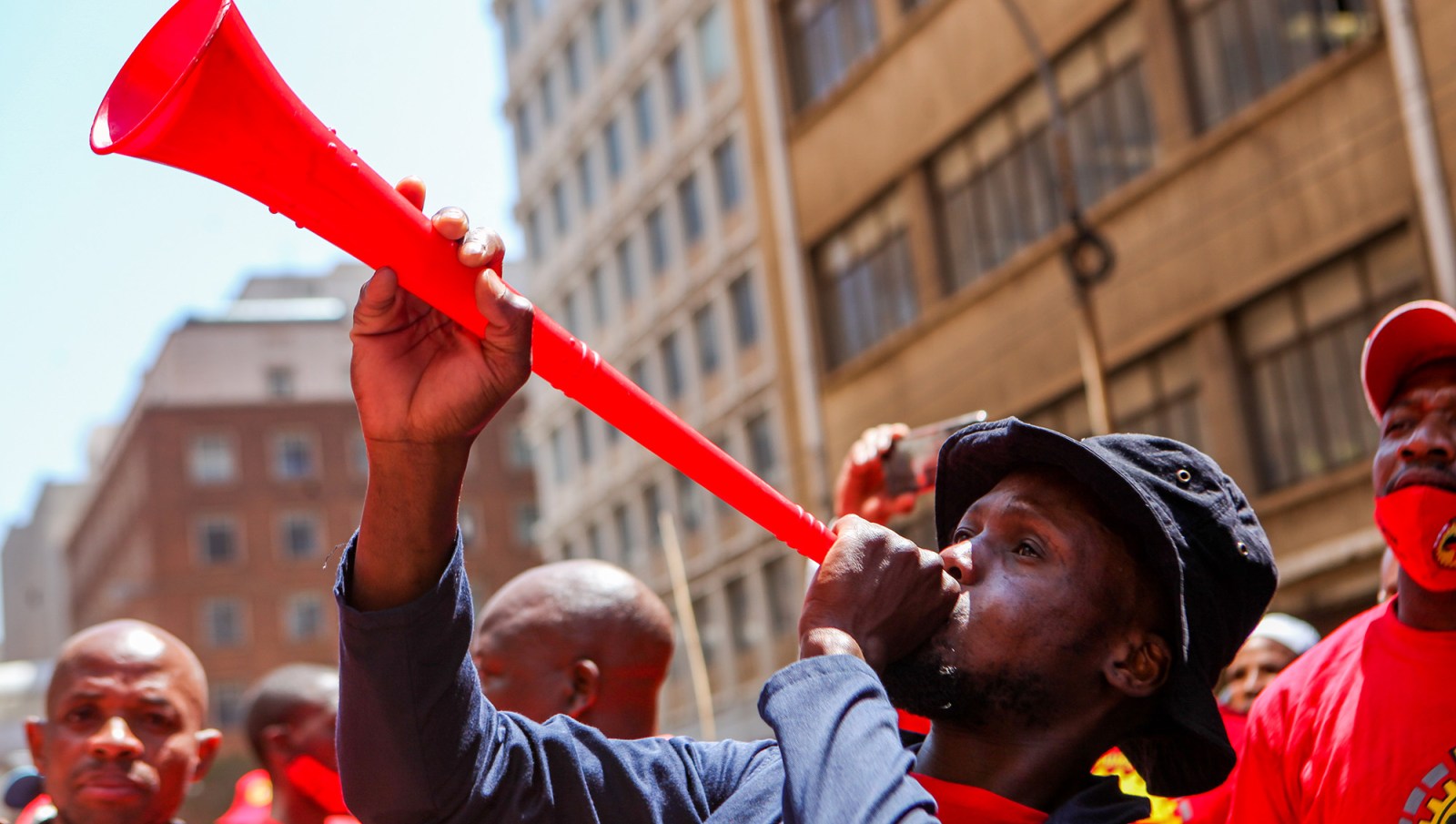 The National Engineering Strike on October 05, 2021 in Johannesburg, South Africa. The National Union of Metalworkers of South Africa (NUMSA) called on all engineering workers across the country to down tools and fight for a living wage. (Photo: Gallo Images/Sharon Seretlo)

Numsa members are prepared to settle on Seifsa’s 6% salary increase offer. But the trade union will only do so if it is guaranteed that the percentage increase is reflected on the hourly rates that workers earn in the steel industry.

The strike in SA’s steel and engineering industry, which has persisted for over a week and left shop floors at factories across the country abandoned, is set to continue after the National Union of Metalworkers of SA (Numsa) rejected an improved salary increase offer from employers.

The strike started on 5 October and has been painful for workers, employers, the beleaguered steel industry, and SA’s broken economy.

Workers affiliated with Numsa have lost about R100-million in salary payments since the nationwide industrial action started because employers have implemented a “no work, no pay” policy.  Employers such as vehicle maker BMW are already reporting disruptions in the supply of steel (used in the manufacturing of vehicles) and slower production activity at its local factory.

The Steel and Engineering Industries Federation of Southern Africa (Seifsa), the sector’s largest employer body that represents 18 organisations, has sweetened its 2021 salary increase offer for Numsa members — increasing it to 6% from 4.4%.

But Numsa, which represents over 100,000 workers in the steel industry, has rejected the improved offer saying it doesn’t translate to actual salary increases for workers.

Numsa general secretary Irvin Jim said its members are prepared to settle on Seifsa’s 6% salary increase offer. But the trade union will only do so if it is guaranteed that the percentage increase is reflected on the hourly rates that workers earn in the steel industry.

“Our members said we can consider taking the [salary increase] offer, on condition that Seifsa is prepared to pay it on actual rates of pay and not on minimum payments.  As things stand, they are not willing to pay on the actual rates. So, there is no agreement that exists between us and Seifsa,” said Jim.

Numsa, which pushed for an 8% salary increase, also wants the 6% to be across the board or offered to all workers regardless of their salary and skills level.

The industry cannot afford an indefinite strike because it is battling to survive an environment in which steel prices are depressed because of cheap steel imports. Steel demand is also in the doldrums as big construction and infrastructure projects have dried up since the 2010 Soccer World Cup.

Numsa and steel employer bodies have to conclude a three-year salary increase deal after a previous multi-year agreement came to an end in 2020.  Seifsa believes that its improved salary increase offer will translate to more money in the pockets of workers.

Seifsa’s operations director, Lucio Trentini, said the improved offer means that a general labourer’s total guaranteed pay will move to a minimum of R 12,734 per month from R12,500.  On an hourly basis, Trentini said Rate A workers (including artisans) will receive a pay increase in years one, two, and three of R4,24, R4,45, R4,67 respectively. Meanwhile, the hourly pay of Rate H workers (including general labourers) will increase by R 2,97, R3,15, and R3,34 over a three-year period.

“Given the current economic and trading conditions and economic data tracking the performance of the sector over the last 24 months, we believe the improved offer is more than fair, equitable, and sustainable,” said Trentini.  He struck a reconciliatory tone as Seifsa is prepared to restart talks with Numsa to resolve the salary increase impasse.

“The longer the posturing and refusal to close [a salary agreement] continues, the more jobs will eventually be lost, in an industry which should be doing everything possible to protect each and every job in the sector.” DM/BM