You knew it all along, Ekurhuleni! Community waste collectors were ‘ripped off’ 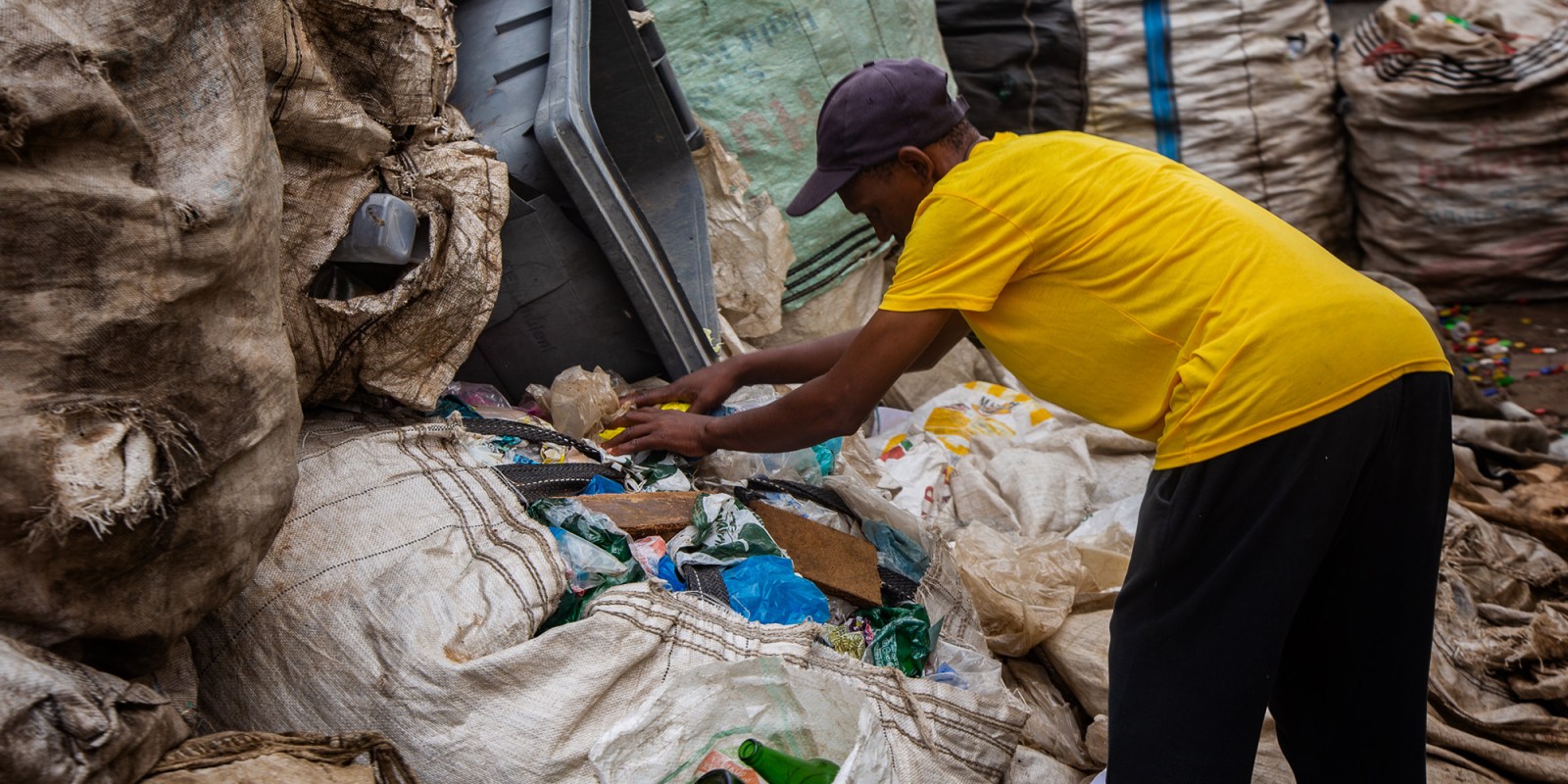 The City of Ekurhuleni repeatedly dodged claims by amaBhungane that a waste collection programme to empower the city’s poorest, short-changed them instead. But city officials knew all along. Their own investigation, now obtained by amaBhungane, had told them the same thing.

Disgruntled waste collectors in Ekurhuleni, contracted on an ambitious R1.2-billion job creation and empowerment programme, told amaBhungane in July that promises were broken, that they were underpaid and companies supposed to mentor them had pocketed most of the money.

The city dodged the claims then — ignoring repeated questions — and now, confronted by amaBhungane with its own report, the city continues to deny there was anything amiss.

But the forensic investigation by independent auditors, commissioned by the city itself, gives broad backing to allegations published by amaBhungane — although the report deals only with one of five mentor companies contracted by the city.

The report was obtained by amaBhungane via a Promotion of Access to Information Act (PAIA) application lodged with the city in which we requested the report by name — after having been tipped off about its existence.

The investigation raised the same red flags that amaBhungane did — and calculated in detail the substantial sums it said were still owed to community contractors.

The city received that report three years ago and seemingly chose to brush off its findings.

Our article of 21 July 2021 described how five established local companies were contracted by the city to “mentor” 45 community-based waste collecting contractors and six recyclers to provide comprehensive refuse removal and recycling services across large parts of Ekurhuleni.

By the end of that time, these small businesses were supposed to have favourable banking profiles, own their plant and equipment, and have the financial muscle and business know-how to go on their own.

Except, according to the community contractors, that did not happen: the city ignored complaints that the established mentor companies were short-changing them.

AmaBhungane wrote repeated emails to the city requesting information about the project, including under PAIA.

Most of the emails were ignored.

When the report was finally handed over, it revealed that just a third of the way through the contract, a group of community contractors had allegedly been underpaid by R2.69-million, and their “mentor” had allegedly been overpaid R7.6-million for what were described as “fictitious” services.

The city would only say that it had “made all payments for services rendered in line with the approved contract”.

The report and what it tells us

In 2018 the city manager, Dr Imogen Mashazi, contracted an outside auditing company to review the performance by one mentoring company — a joint venture by MCC Security Projects and Before Dawn Property Development — in one area, Tembisa.

The subsequent review is dubbed a “Phase 1 report” but it is not clear whether others were done. If so, they were certainly not disclosed to us. The audit company referred all queries to the city.

Nevertheless, the contractual problems raised in the report apply to most mentor companies and community contractors.

The 102-page report, dated November 2018 and titled “Review of Possible Non-Compliance with the terms of Contract No. A-WMS 11-2015” was compiled by ARMS-Audit and Risk Management Solutions, a Johannesburg forensic auditing firm that specialises in services to government departments.

The auditors concluded that the waste collection services the city required were being efficiently delivered — but not with the intended empowerment outcomes.

The theme of the report was that the contractual terms of the programme had resulted in an “unbalanced” power relationship between the “mentors” — known as development contractors (DCs) — and the community-based contractors (CBCs).

The relationship was not one of sub-contracting an independent entity, but of employment. There was an urgent need for the city to intervene and correct this.

The development contractor (the MCC/Before Dawn joint venture) had also not yet signed the city’s service level agreement.

And 18 months into the contract, the formal relationship between the development contractor and the community-based contractors remained in an unsigned draft form.

The report recognised that the community-based contractors lacked the legal skills to enter into such relationships.

The contract made provision for payments to be calculated on the basis of the number of waste collection points serviced. The problem was establishing how many there really were.

Much of the report was a neighbourhood-by-neighbourhood breakdown of stands, yards, tuckshops (which generate a great deal of waste) and other local businesses.

“The claims submitted by MCC Security Projects and Before Dawn Property Development CC JV were inflated and it resulted in the overpayment of R7,610,484.00 up to July 2018,” the auditors noted.

“We recommend that officials at MCC Security Projects and Before Dawn Property Development CC JV be informed of the confirmed Formal “Service Points” and the amount of R7,610,484.00 that was paid for non-existent service points to date and that the money be recovered.”

The city did not do this.

In response to amaBhungane’s questions, Ekurhuleni spokesperson Zweli Dlamini said, “There was a count of the service points and everything was found to be done in line with the SLA. There was no overpayment but instead the municipality saved money in this regard.”

The city did not explain the discrepancy between the auditor findings and its own, or how it was resolved.

Before Dawn chief executive Velani Magagula, responding on behalf of his joint venture with MCC Security, said he was not aware of the forensic report and was also constrained by a confidentiality clause in his contract with the city.

“The Joint Venture has not seen the 2018 Audit and Risk Management Solution Forensic Investigation… As a result, the Joint Venture is not aware of the alleged R7.6-million overpayment.

“If this were true, the Joint Venture assumes that it would have been advised to repay the overpayment back, the Contract Cancelled and that it would appear in the City of Ekurhuleni financial statements.”

The report’s astonishing conclusion was that over a period of only 17 months, each community-based contractor — averaging a staff of about 14 workers — had been underpaid by R2.69-million.

“We recommend that the Development Contractor — MCC  Security and Before Dawn JV — be informed that they should provide proof that they have paid the money to the Community Based Contractors.”

The city dodged amaBhungane’s question on this recommendation, noting only that it had “made all payments for services rendered in line with the approved contract”.

That left unanswered the issue of whether the development contractors had met their obligations to CBCs.

Magagula, on behalf of the development contractor, repeated that he was not aware of the report or any such finding.

He said forensic investigators may not have considered the costs associated with the waste collection services — which the mentor companies were entitled to deduct from their payments to the community-based contractors.

These included “capital redemptions for plant and vehicles”, fuel and maintenance.

There were contradictions in the definitions of collection points in these areas, no reliable count of the number of shack dwellings or backyard rooms, and no understanding of how many families lived in each. Numbers seemed to fluctuate month by month.

“We established and concluded that as a result of Tembisa residents having “back rooms” that result in more than one family occupying one stand, thus a “Service Point” results in the volume of refuse being very high that has an impact on the Community Based Contractors in that it increases operational costs and reduces the life-span of equipment used.”

In other words, this worked to further disadvantage the CBCs.

The auditors also recommended that the city look into a previous, similar waste collection contract, and ascertain whether those community-based contractors had been underpaid. If necessary, the report recommended that “civil action” be taken.

There is no indication this has been done — or that the lessons learnt from the 2016 contract have been incorporated into the design of a new five-year contract to be awarded soon.

The city would only say that it had taken note of recommendations to strengthen supervision of the implementation of the contracts and that “supervision and monitoring staff has been included on the approved [council] structure”.

Municipal spokesperson Zweli Dlamini said the report and its recommendations “were dealt with according to our internal systems”.

He said the programme was assessed “on an annual basis to ensure that the goals of the city are achieved and we are satisfied with the progress recorded”.

Magagula said the joint venture filed its own report to the municipality at the close of the project, and three months later had received no adverse comments from city officials.

“Suffice to say the Joint Venture never received any penalties for service delivery failures as stipulated in the contract document. The Joint Venture is proud to say it fulfilled all its obligations in terms of the spirit of the contract, signed contracts and bid specification.” DM