Ground Level Report: It’s miserable ‘Carols by candlelight every night’ for some residents of neglected Vrygrond in Cape Town 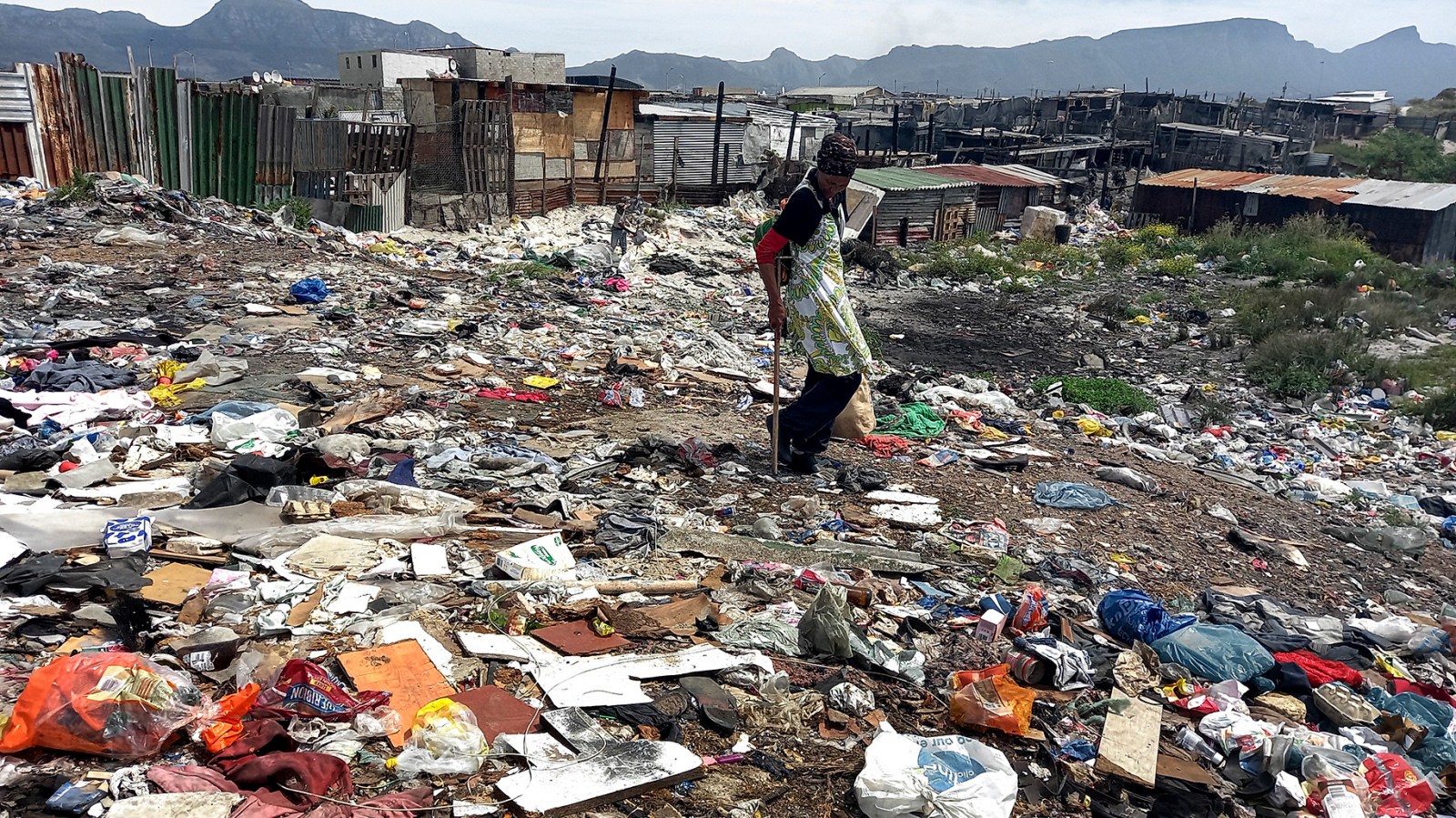 A desperate mother in the impoverished community of Vrygrond in Lavender Hill searches through rubble for something she can clean and resell to buy food. (Photo: Vincent Cruywagen)

The township is in a shabby state. Situated in Ward 67, it lies between Seawinds and Capricorn near the False Bay coastline east of Cape Town. Maverick Citizen visited the area and discovered mounting poverty and desperation. 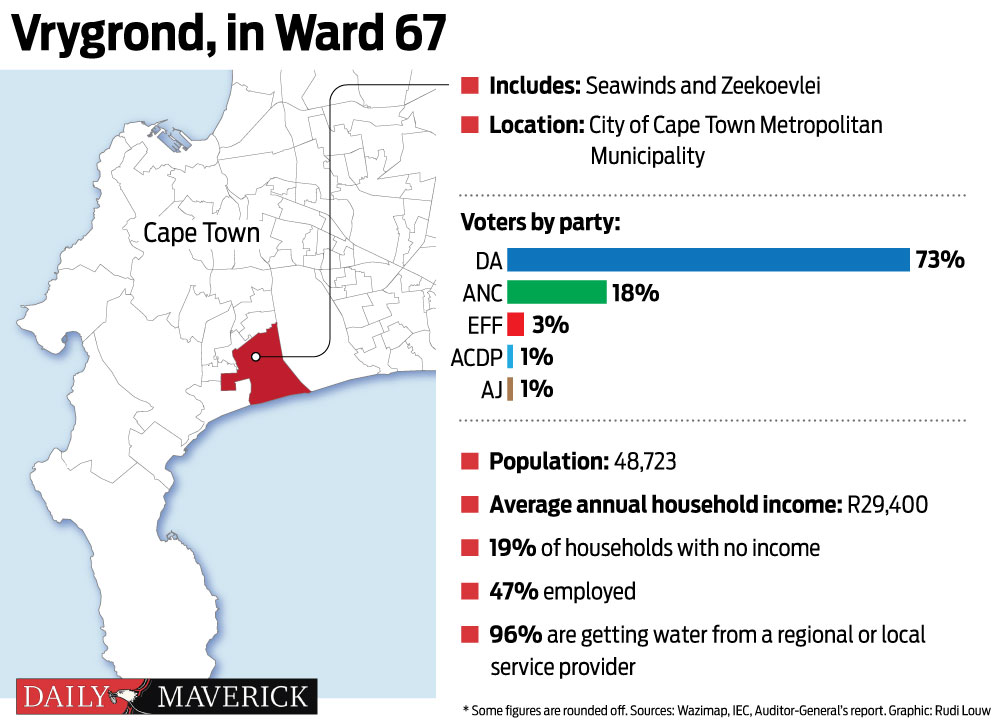 Poor service delivery, a housing backlog, refuse not collected for months — these are the daily challenges for many Vrygrond residents, especially for those living in the informal settlements of Overcome and Xakabantu.

Xakabantu, established in 2016, consists of about 1,000 shacks, while Overcome, settled in 2004, has more than 1,600 informal structures. Both informal settlements are expanding rapidly and have played host to numerous violent service delivery protests. Disgruntled residents tell Maverick Citizen that the situation is tense and protest action could erupt at any moment — even before the 1 November local elections.

This seemingly forgotten part of the world sits adjacent to the broader Lavender Hill area — a district created in the early 1970s to serve as a  dumping ground for coloured Capetonians, who were forcefully relocated from District Six, Lower Claremont, Newlands and Plumstead under the Group Areas Act.

Less than 100 metres into Vrygrond, the extent of the poverty in the township becomes clear. In Drury Road, a small unprotected wetland was being used as a dumping site. The stench emanating from the murky water was unbearable. Rubbish dumps were also seen littering street corners and piling up between shacks and in front of homes, posing health risks to the entire community and especially children.

The ward was won – again – by the DA in the 2016 local municipal elections, a decisive victory with 73% of the votes.

Yet residents who spoke to Maverick Citizen said the DA, through councillor Gerry Gordon, has failed in its task and promise to improve conditions.

ANC activist Tony Constants, 62, who was shot with buckshot during the 1976 anti-apartheid students uprising, has been living in Xakabantu for over 20 years.

Sitting atop a rubbish dump and scratching through the rubble for copper pieces, Constants said, “If I look back at what we fought for and what we have then I regret risking my life in 1976. Parliament has forgotten about Vrygrond. The life of this country is such a big lie.”

Disabled 66-year-old Maggie Solomons is among the residents who cannot afford to buy electricity in this impoverished community. For R10, residents receive six units of electricity. Their previously subsidised allocation of 50 free units has been halved. As such, she often lives in darkness. When Maverick Citizen paid her a visit at home, neighbour Elizabeth Lewack brought Solomons some food and bought her electricity.

“It’s Carols by candlelight every night in certain parts of Vrygrond,” Solomons said.

Elsewhere, Overcome residents have become accustomed to using outside toilets and accessing a limited number of taps. Residents who have taps on their premises, most of which they installed themselves, share them with neighbours.

Oslin Lindoor is one of many residents who depend on their neighbours for water. For 16-years he has been walking the same path to neighbour Felicia Faroa who shares her tap with several households.

“It is not nice to go and walk to get water. The government has promised that we get water but 16-years later I’m still without water. From 2016 up until September 2021, nothing was done to improve our lives,” he said.

Come 1 November, Lindoor will be carefully choosing who to vote for. He hopes that this time around his vote will secure him a house with a tap and a toilet.

ANC ward councillors Nonkosi Fodo and Lorraine Moko put the blame for the lack of service delivery, housing and water at the door of the DA. They say that the ANC is determined to snatch Ward 67 from the DA at the 1 November elections.

“Should the ANC win, we intend forming a partnership with all the parties to ensure that Vrygrond gets the facelift it richly deserves. Politics must be put aside for the interest and development of communities,” Fodo reiterated.

Whoever takes over the ward faces a mammoth task, said Fodo, adding that 3,000 households are in desperate need of housing which needs to be dealt with expeditiously.

Current DA councillor Gerry Gordon’s tenure ends on 31 October. Responding to questions from Maverick Citizen on 12 October, Gordon said, “The City has been doing constant service delivery. Vrygrond has had constant clearing of blocked drains as well as removal of foreign objects out of drains. Since 2017 the planning for the Vrygrond housing project is in the planning stages,” she said.

But DA Ward candidate Mandy Marr said Ward 67 will change to Ward 45 following the election. She said population expansion had resulted in the need for this new ward to be created, encompassing Seawinds, Hillview, Overcome, Vrygrond, Costa da Gama and Capricorn.

Noting the failures of the DA in delivering on its promises and the challenges Vrygrond faced, Marr said, “My only promise is that I want to serve this community with open communication, honesty and respect.

“I’ve worked with the various community leaders, including the ANC, FF+ candidates and the independent candidate, so my plan is to continue to work together no matter who wins. I acknowledge that there are many challenges and I’m confident that if we work together we can overcome them.”

Regarding the housing backlog, Marr explained that the City of Cape Town has approved a housing development with 650 units — construction of which is scheduled to commence in early 2022.

Outgoing Mayor Dan Plato, acutely aware of the housing crisis, confirmed the 650 units earmarked for Vrygrondwill commence early next year. He added that housing projects have been hampered by Covid-19 regulations. DM/MC