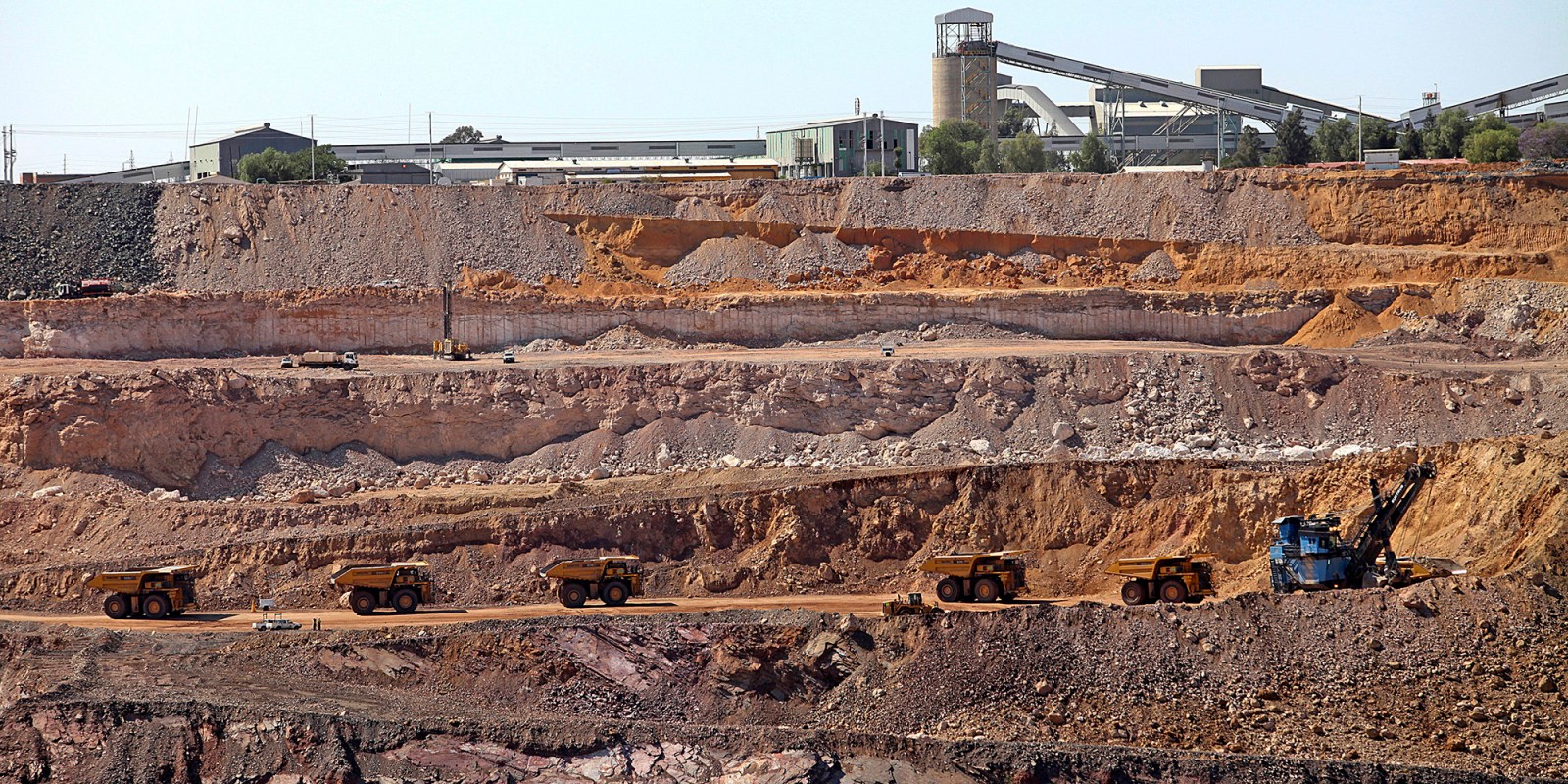 SA mining production fell by 2.4% in August compared with July, Stats SA said on Tuesday. Meanwhile, manufacturing output rebounded month on month by 7.6% in August, but that was after it fell 8.4% in riot-wracked July. The data confirm the prevailing view that the economy contracted in the third quarter (Q3).

Mining remains one of the few bright lights in an economy that has been dimmed by more than just Eskom, but its growth is slowing down. On a monthly basis, in August the sector’s output declined by 2.4% after rising by 3.2% in July. The July number was revised lower from 4.1% previously.

It is in the annual figures that the slowdown in growth is really apparent. In August the mining industry notched a 2% expansion compared to the same month last year, a number that fell short of expectations. In July, the reading was growth of 12.3% while in June it was 22.9%. In April, the annual rebound was 117.4%, but that was off a base that was deep underground as April last year witnessed the hardest lockdown period.

The slowdown is explained in part by the fact that the mining sector rebooted faster than most others last year in a rare example of cooperation between the government, industry and unions. Mineral Resources and Energy Minister Gwede Mantashe has been ham-fisted on the policy front of late, but in the face of stiff resistance from the control freaks in Cabinet he rammed that reopening through.

In the three months to the end of August, the sector eked out growth of only 0.4% compared with the previous three months.

Mineral sales, on the other hand, maintained very robust growth of 35.1% year-on-year and 11.5% month on month. Sales for platinum group metals (PGMs) were 55.1% higher than in August last year. This is because of soaring commodity prices, and while PGMs are off their peaks reached earlier this year, the price of coal is glowing because of shortages in China currently. 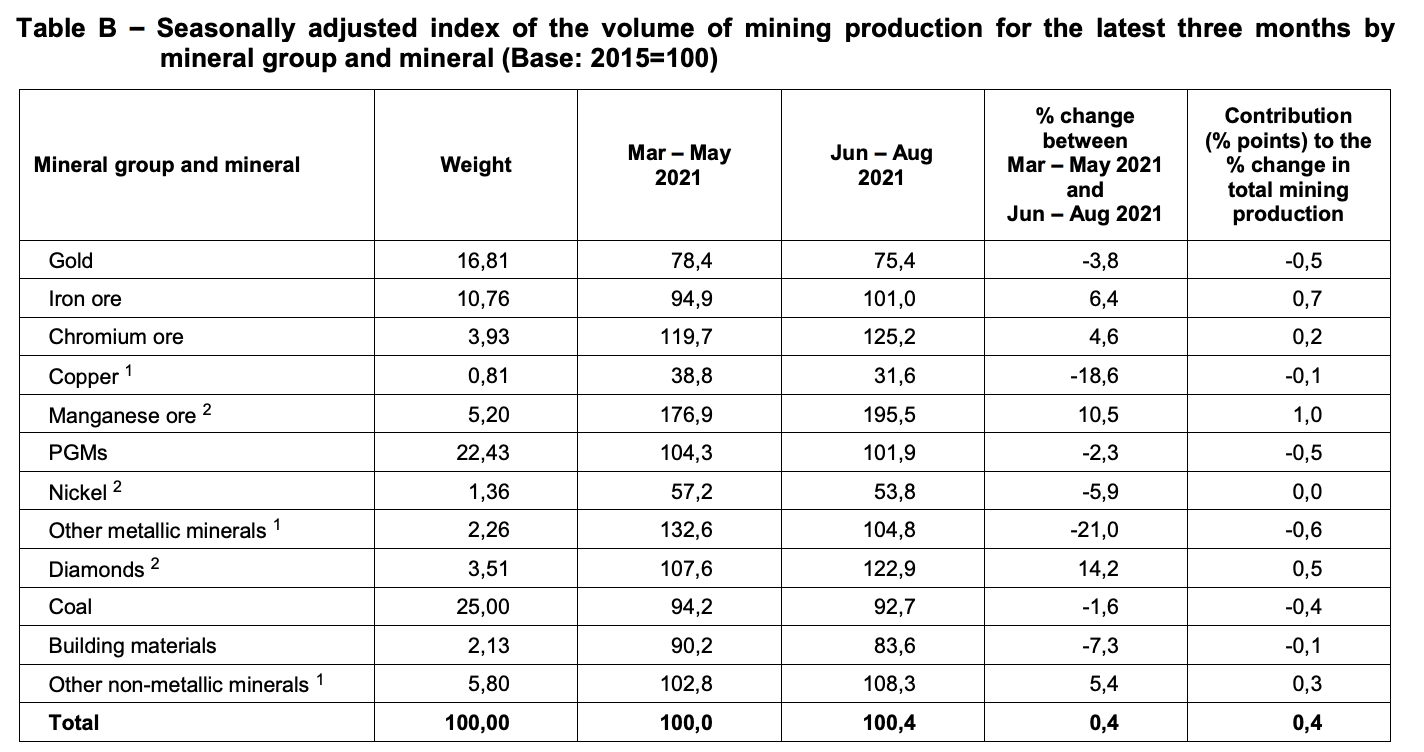 “We maintain our view that electricity-related disruptions, along with elevated input costs, could limit the extent to which mining volumes benefit from the global growth rebound. Inefficiencies at the ports are also not encouraging for general export volumes of mining, manufacturing and agriculture,” said FNB senior economist Thanda Sithole.

Statistics South Africa (Stats SA) also released August manufacturing data on Tuesday. On a year-on-year basis, the sector put in growth of 1.8% after it declined by 4.8% in July when it was battered by the wave of looting and unrest that tore through KZN and Gauteng after the jailing of former president Jacob Zuma. On a month-on-month basis, there was a rebound of 7.6% after a decline in July of 8.4%.

“The latest print came in higher than expected, with consensus projecting a 6% month-on-month rise. Nevertheless, the performance of the manufacturing sector remains poor, as it registered monthly contractions in six out of the eight months this year.

“Looking ahead, according to the latest Absa Purchasing Managers’ Index, the sector should have a relatively good month in September,” Pieter du Preez of Oxford Economics Africa said in a note on the data.

But, taken together, there has probably not been enough growth in either sector to prevent an expected contraction in gross domestic product in Q3.

And the fourth quarter has not got off to a great start. For one thing, load shedding has returned, which may indicate that the economy has been picking up some momentum – momentum that will be throttled by Eskom. Then there is the Numsa strike in the steel sector.

And looking ahead, the pandemic’s fourth wave may spoil the party yet again for the beleaguered tourist, restaurant and booze sectors just when they should be cashing in as the summer holidays loom. This is one economy which simply cannot get a break. DM/BM