Running for their lives: Speed cats return to southern Mozambique after six decades 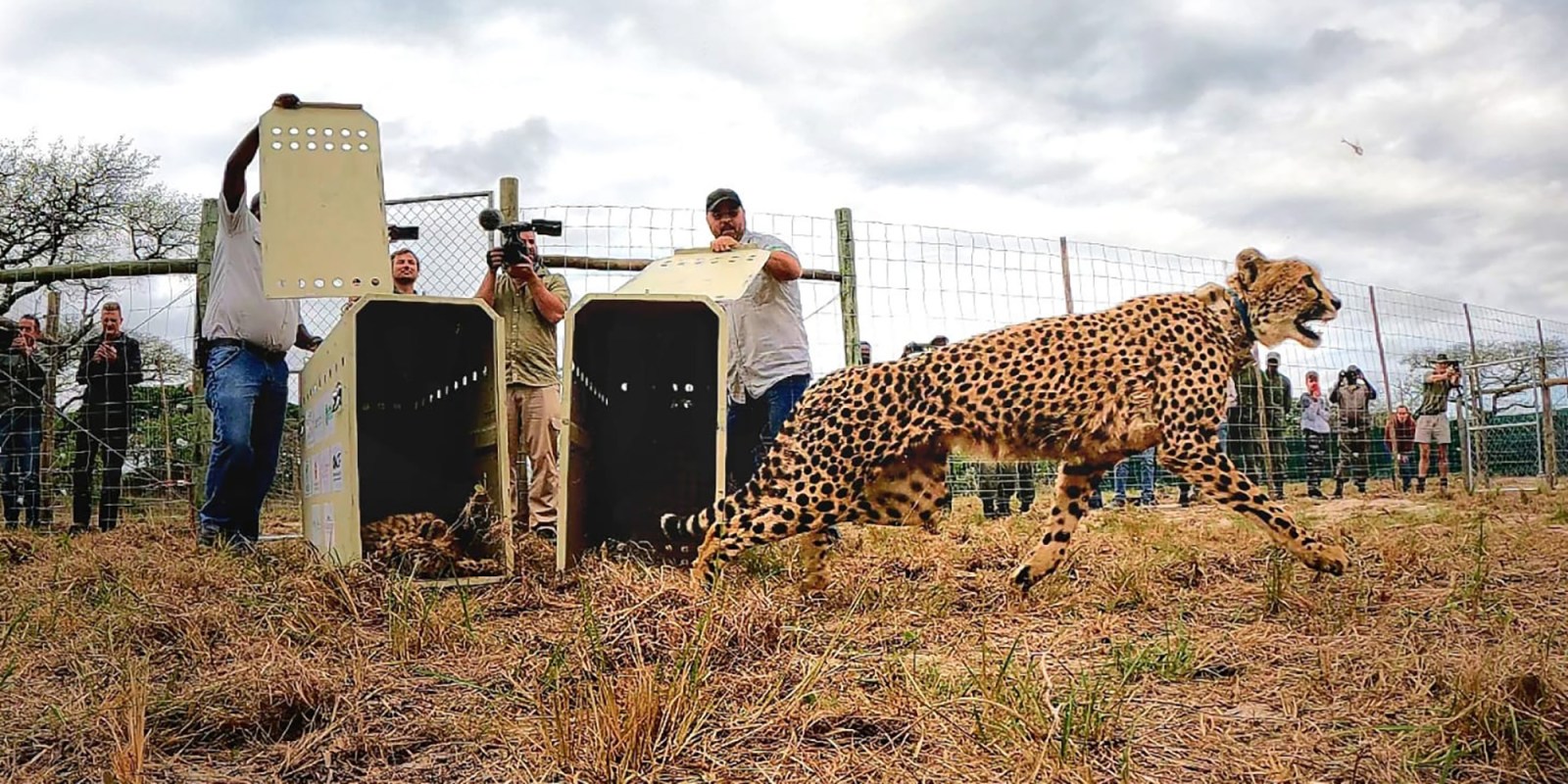 The first cheetah to return to southern Mozambique in 60 years trots into a holding boma in the Maputo Special Reserve. (Photo: Ashia Cheetah Conservation)

Four of the fastest hunting cats in the world have been let loose in the southern corner of Mozambique — it’s the first time that cheetahs have been seen here in nearly 60 years.

Two cheetah males and two females sourced from private reserves in KwaZulu-Natal and the Western Cape have been moved to the 104,000ha Maputo Special Reserve, about 60km north of the KwaZulu-Natal border and the Mozambican coastal resort of Ponta do Ouro.

Formerly known as the Maputo Elephant Reserve, this sprawling area of open grassland, swamps and coastal lakes is also home to a large herd of elephant which has grown considerably after a small remnant herd survived poaching and hunting onslaughts during Mozambique’s civil war.

Now jointly managed by the National Administration of Conservation Areas (Anac) of Mozambique and the Peace Parks Foundation, the reserve has an estimated population of about 15,000 animals, mostly antelope species.

Apart from gradually restoring natural predation of the growing herbivore population, the arrival of the four cheetahs from South Africa also provides a new dose of hope for a vulnerable predator species that has been eliminated from 90% of its former range in Africa.

Though cheetahs can sprint at more than 100km/h while hunting, these terrific bursts of speed have not saved them from shrinking to around 6,600 survivors in Africa. Most live in Namibia and Botswana, but the much smaller South African population has expanded considerably over the past decade due to a metapopulation and range expansion project managed by the Endangered Wildlife Trust.

This project nurtures several small cheetah populations, mostly in private game reserves, and then swaps them around on a regular basis to boost the shrunken gene pool.

Vincent van der Merwe, project coordinator of the Cheetah Range Expansion Project, says the Southern African metapopulation has more than doubled since 2011 — from 217 cheetahs in 48 protected areas, to 478 in 67 protected areas across South Africa, Mozambique, Zambia and Malawi.

“The metapopulation in this network of protected areas constitutes the only growing wild cheetah population worldwide,” he said.

According to the Peace Parks Foundation, the cheetahs were shifted by plane and road to a new holding boma, where they will be kept for about three weeks of acclimatisation, before being released into the larger reserve.

The cheetahs were donated by Ashia, a non-profit conservation organisation working to prevent the further decline of wild cheetah populations. It also covered the costs of the translocation, including transportation, vaccination and the fitting of tracking collars to monitor the big cats in their new environment.

Mateus Mutemba, director-general of Anac, said in a statement, “The reintroduction of cheetah is yet another historic conservation milestone in Mozambique and the development of the reserve into a self-sustaining operation that generates revenue for the communities living in the area.”

With support from the World Bank’s Mozbio Programme, nearly 5,000 animals, including, buffalo, giraffe, impala, kudu, nyala, waterbuck, warthog, oribi, eland, blue wildebeest and zebra, have been translocated to the Maputo reserve over the past decade.

Peace Parks CEO Werner Myburgh said his foundation was proud to be playing a part in expanding the range of cheetahs as part of its overall work in stabilising ecosystems and reintroducing carnivores to ecologically restored landscapes.

“Not only is the rewilding programme in Maputo Special Reserve contributing to the reserve becoming a world-class wildlife and tourism destination, but restored ecosystems such as these are also critical carbon sinks to help contribute to mitigating climate change.” DM/OBP

Running for their lives: Speed cats return to southern Mozambique after six decades