OP-ED: OFF THE BEATEN TRACK

Letter from Mpumalanga: Restarting the locomotives of prosperity in a town above a waterfall 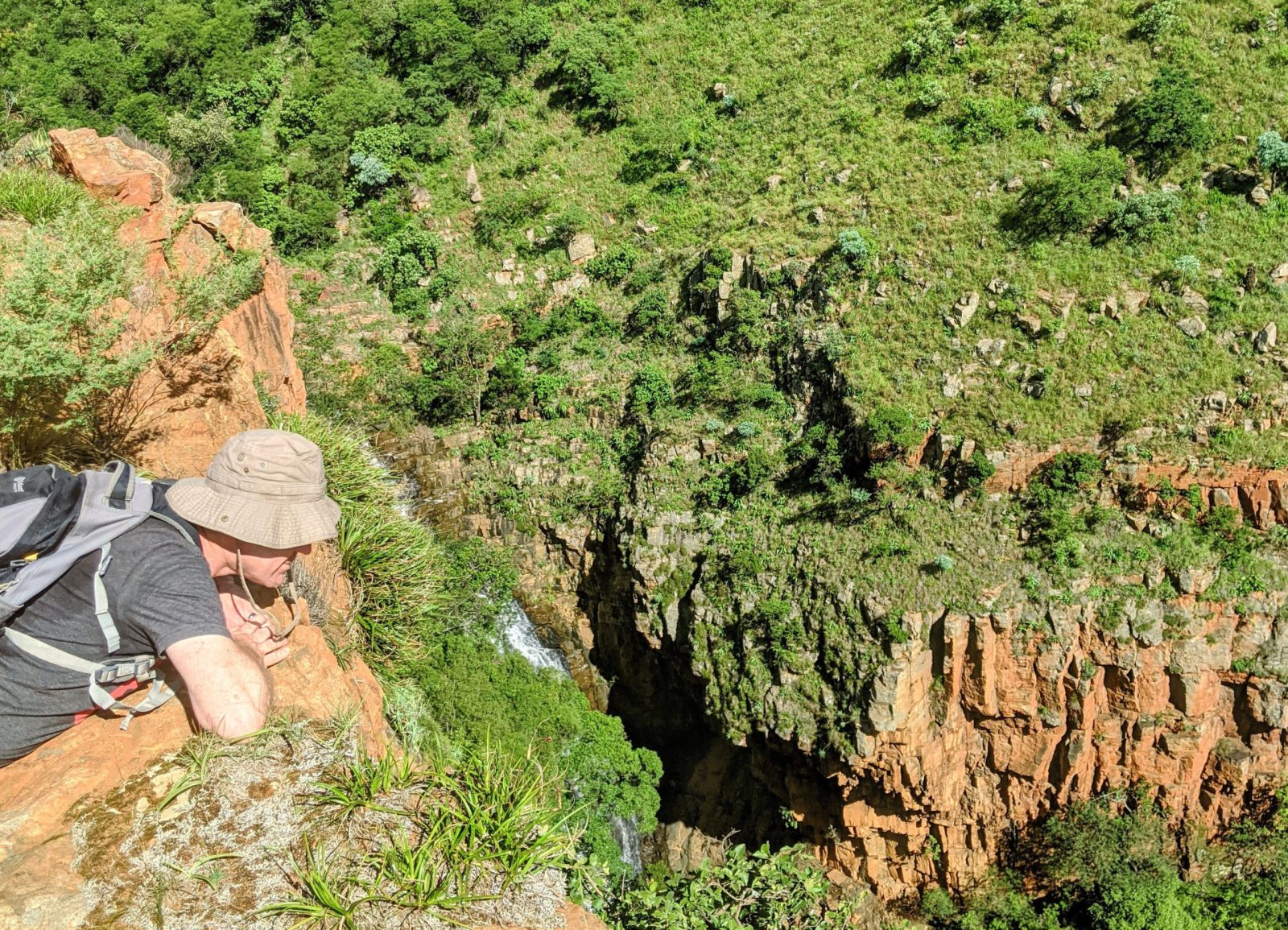 Preserving the legacy of small, often forgotten towns such as Emgwenya requires inclusive input with rejuvenation in mind. Restart the railways and investment will return.

Waterval-Boven, meaning “above the waterfall,” also known as Emgwenya, the “place of the crocodile.” Get too distracted as you drive along the N4 from Gauteng to Nelspruit, and you could drive by the town in three minutes, without really noticing it.

But turn right at the sign just before the NZASM tunnel, and you’ll find a run-down old dorpie with potholes, muddy tap water, and businesses including two butchers, a petrol station, spaza shops, a technical college and a historic inn.

Among other things, Emgwenya is also known as South Africa’s premier rock-climbing destination, with hundreds of vermilion, aloe-speckled cliffs.

When my husband and I, on an 18-month exchange programme from Pennsylvania, told family and friends we wanted to live there for at least a third of our South African sojourn, they thought we’d lost our minds.

But the two of us are what you might call rust belt aficionados. In the US, we lived in a picturesque, run-down mill town.

So we ended up falling in love with Boven, just as we suspected we would.  My relatives came around, too: something about the mountain air and hidden waterfalls, the Bokoni stone circles, the friendly locals, and then the charming melancholia of all those rusty-roofed railway houses.

The decline of small towns is, of course, old news. Local municipalities are known for lethargy and corruption. Jobs are scarce. Worldwide, every week three million people — a little short of the population of Cape Town — move to cities.

Take, for example, the road from Boven to Lydenburg. When I was young, we’d fly over it in an hour. Today, that road has been so cratered and damaged by overloaded freight lorries that ordinary vehicles have to travel a two-hour roundabout loop.

Or note the once-mighty railways. Trains, of course, provide the reason for Boven’s existence: when Paul Kruger opened the Delagoa Bay Railway Line in 1895, the main interchange and control office was located just above where the tracks descended to the Lowveld.

Today, as a recent report by the Brenthurst Foundation outlines, Transnet is “down and out for the count”.

Beginning with the deregulation of road freight in 1977, the railways’ share of both passenger and freight traffic, relative to the highway network, steadily declined. In the 1980s, the Botha and De Klerk governments abolished the apartheid mandate for the railway network to act as “employer of last resort” for indigent white men.

Finally, following a series of futile moves to streamline operations, and staggering administrative incompetence that left most tracks unguarded during the 2020 lockdown, cable and signals theft by organised crime syndicates all but finished off a network that, in its heyday, had been regarded as one of the best in the world.

Rudolph Pretorius, a congenial, moustachioed retiree in his late 60s, moved to Waterval-Boven in 1979, as a senior train control officer in the centralised traffic control office (an establishment moved last year to Kaapmuiden, in another blow to Boven’s fortunes). He recalls both the stress and the vibrancy of that era, with as many as 140 trains a day passing through the Boven interchange.

“It was rough,” he told me, sitting on his stoep in front of Emgwenya’s main drag, Third Avenue. “We had no computers.  It was all a matter of pressing the right buttons, like a high-speed pianist.”

Today rail traffic is down to six trains a day — a decline of more than 95%.  As teenagers, my parents caught the train from their Nelspruit home to Belfast, where they attended boarding school. Today, the train between Emgwenya and Nelspruit takes six hours instead of two and a half, and no passengers travel between Pretoria and Maputo.

Granted, the spoils of the South African railway era were not equitably distributed. Black people lived, and still mostly live, in an impoverished township perched on the edge of the 75m-high Elands River Falls. Only one road enters the township, to allow the place to be easily sealed off by armoured cars. The municipal pool and sports centre were, of course, reserved for whites only.

However, in the democratic era, some gloomy alchemy of municipal mismanagement, changed priorities and urbanisation has meant that instead of serving a broader community, these facilities have instead fallen into tragic disrepair and disuse.

Vivienne Brown, an energetic, creative 40-something, and co-owner of Brown Earth Tipi Village, is community liaison for an ambitious local revitalisation effort called the Heritage Centre. On a sunny Thursday afternoon, she showed me around the old Reformed Church building that will be re-opening in November as a museum and tourism office dedicated to showcasing the town’s legacy and helping tourists enjoy its attractions.

“Beyond the hiking and climbing, this area’s a treasure trove,” Brown told me. “Ancient African history. Archaean geology. South African wars, Bokoni structures and the railways.” The centre will host displays on all of these, plus a café and, possibly, a Regional Tourism Organisation office.

Vivienne and her colleagues have timed the opening to coincide with the 72nd anniversary of the Mozambique Train Disaster, when on a rainy night in 1949, a train derailed over the Elandspruit, sending 63 returning miners to their deaths.

These men are gone, commemorated by a small, fenced-off plaque at the bottom end of town. But what are Emgwenya’s economic and cultural prospects for rejuvenation?

The Brenthurst Report lays out what can only be called an excruciating recovery path for the railways that could, conceivably, rejuvenate hundreds of towns like this.

First, restore the railway police. Replenish the stolen supplies. Then, begin enforcing the regulations on freight lorries, so they stop ruining the roads while train tracks gleam, unused, in the sun.

None of this seems likely to happen soon. In the meantime, business ticks along in places like Boven.

At Muhammad’s Waterval-Boven Mega Store, customers buy frozen samosas along with their hardware and used furniture.

At the One by One Supermarket, two Indian mynahs flutter around the customers waiting at the cash register — the owner apparently nursed them when they were chicks.

One of the most interesting endorsements of the Heritage Centre and its work comes from a man named Joseph Mandla Maseko. In Emgwenya township, they call Maseko the “king”; he apparently descends from a line of deposed Swazi royals. He also writes academic papers about Christianity, business compliance and Nguni history.

Here Maseko has remained, over the decades, in an ordinary matchbox house, in a township with a shisa nyama on the street corner and a shebeen blasting Gqom. This was where Vivienne Brown met him, to request his support and endorsement.

What does it mean to hold on to a legacy?  In many ways, Maseko’s refusal to give up his title mirrors Boven’s own resistance to obsolescence.

Such perseverance will be essential in South Africa’s many beautiful small towns that dream of becoming the next Dullstroom or Montagu.

Display your history. Prettify the town entrance, as the Boven revitalisation group has done, with corporate sponsorship.  Clear up the rubbish at the upper end of town, by the water treatment plant.

Little by little, like this, you try to stitch together a future. DM

Glen Retief’s The Jack Bank: A Memoir of a South African Childhood, won a Lambda Literary Award. He teaches creative nonfiction at Susquehanna University and is spending a year in South Africa as Fulbright Scholar.  He writes in his personal capacity.