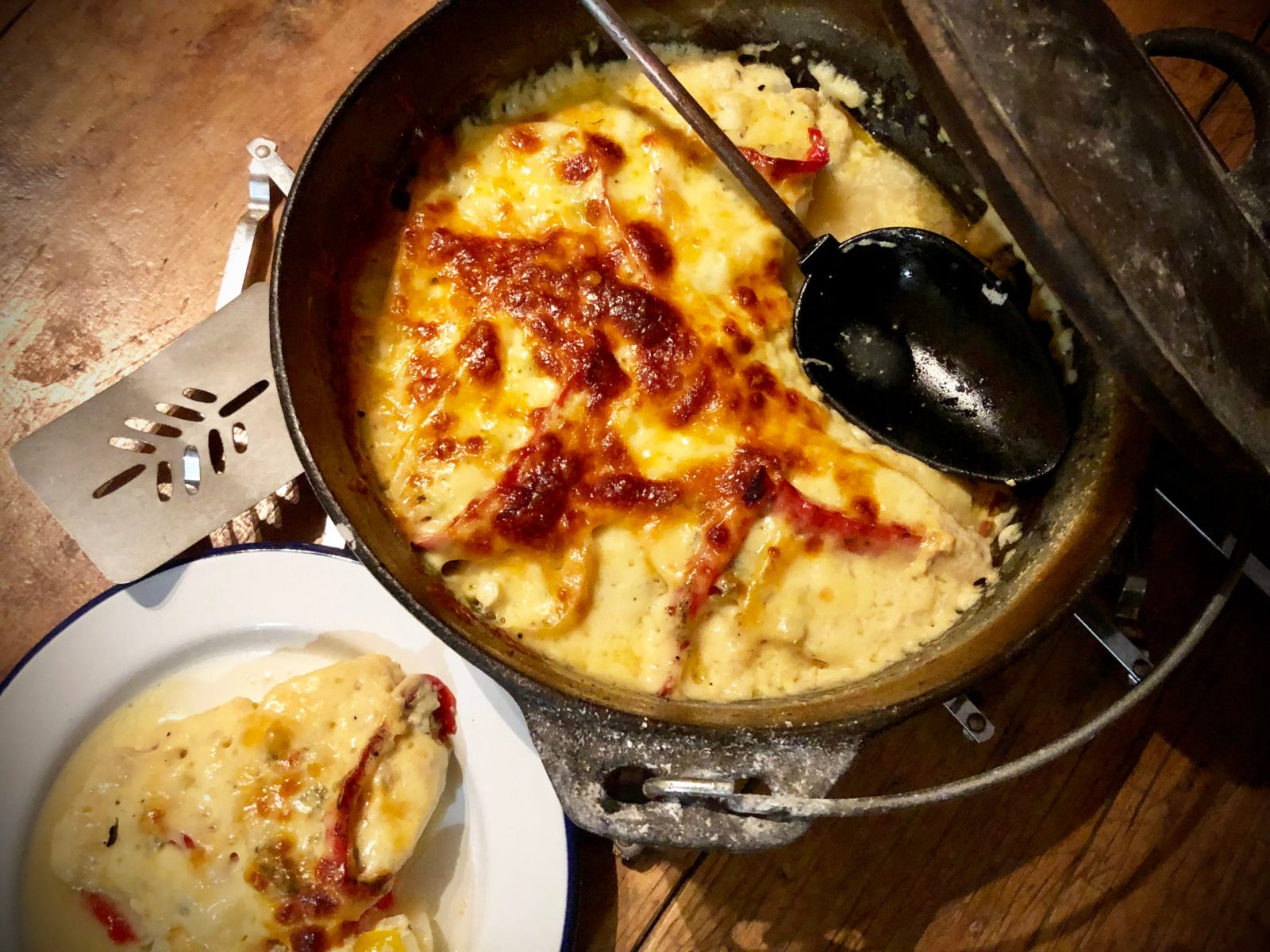 A round cast-iron braai pot is good for more than just braai bread. Try it for a potato bake, in this case with red and yellow bell peppers and a touch of chilli.

Potato bakes happen in ovens, right? They’re made of cream and stock and herbs and/ or spices, plenty of butter, and potatoes that have been scalloped, that is, sliced thinly, then layered, often with onions.

It’s one of those things that almost everyone loves, like bacon, and you can put that in it too if you like. But does a potato bake have to be cooked in the oven? I decided to do exactly what you’d do with a potato bake in an oven dish, but in a braai pot instead. To compensate for the oven you need to have coals around the base for the duration of its cooking, as well as coals on the top.

I topped mine with grated cheese as well. Once that’s been piled on top well into the cook, you need to put the lid back on with lots of coals on top to help get that lovely crisp, golden and crunchy cheesy topping.

Light a fire so you have a supply of hot coals. Clean and dry the braai pot. Oil the pot on the bottom and sides.

Peel the potatoes and slice thinly.

Slice the peppers into julienne strips, chop the spring onions and chives and chillies.

Arrange a layer of potato slices at the bottom and season with salt and pepper. Dot each slice with a knob of butter. Add a few slices of peppers of both colours and sprinkle with salt and pepper. Repeat the layers as well as the dotting with butter and seasoning until everything is used up, ending with a layer of peppers, spring onion and chives.

Mix the cream and stock in a jug and pour over.

Put the lid on and place hot coals all around the base and more on the lid.

Cook until the potatoes are tender, about 90 to 100 minutes. Forty-five minutes in, stir in 1 Tbsp cornflour mixed with 2 Tbsp milk, cover again and continue cooking with more coals on the lid.

An hour in, sprinkle the grated mozzarella on top, cover again, add masses of coals to the lid and keep cooking until the cheese has melted and turned golden. DM/TGIFood