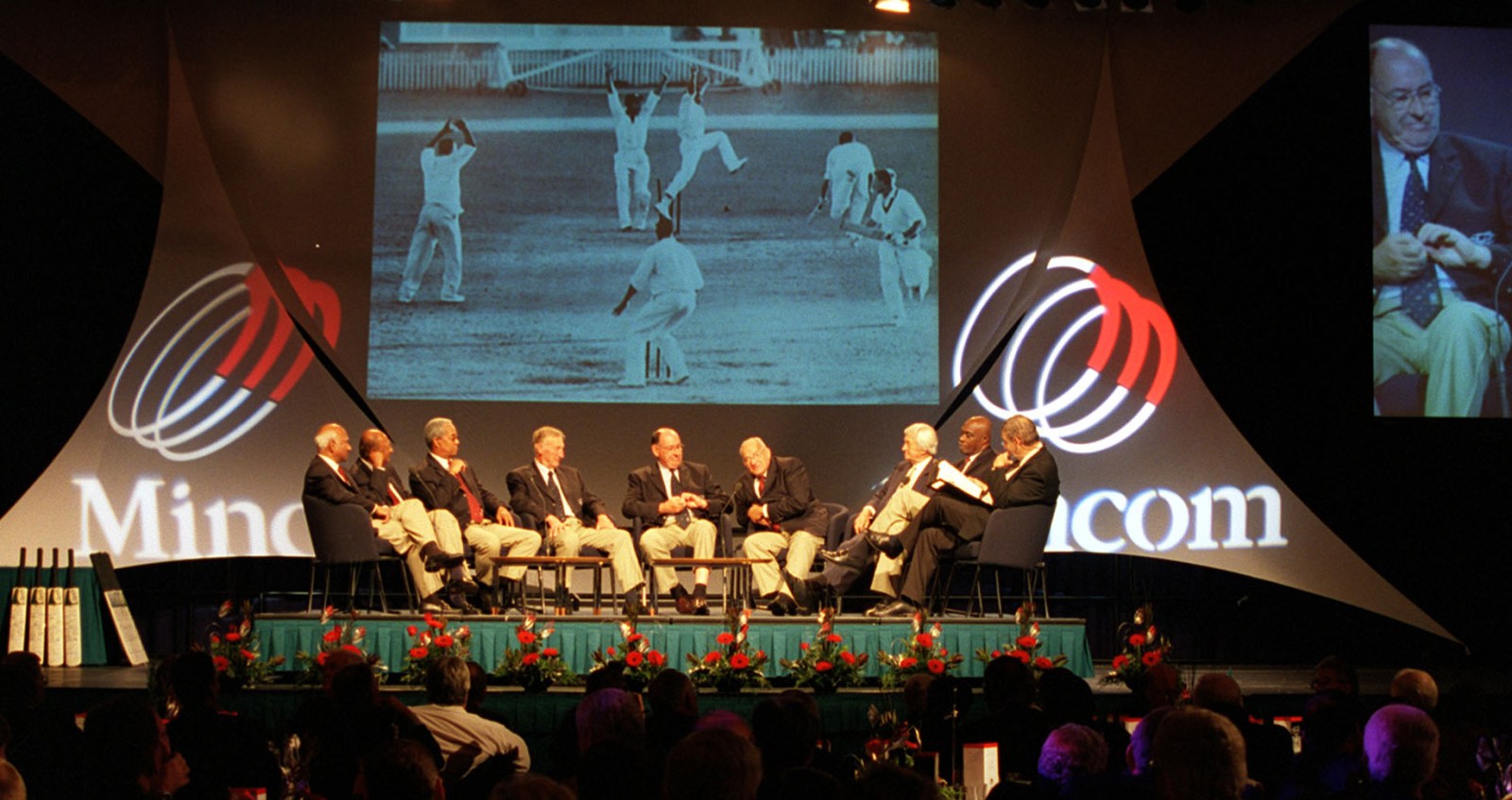 From left: Rohan Kanhai (WI), Joe Solomon (WI), Sir Garfield Sobers (WI), Lindsay Kline (Aus), Ian Meckiff (Aus), Gerry Alexander (WI), Richie Benaud (Aus), Wesley Hall (WI) and journalist Mike Coward sit in front of the famous Ron Lovett photograph as they join other players from Australia and West Indies who played in the first tied Test match at The Gabba in 1960 along with the current players of Australia and West Indies for the 40th anniversary reunion of the tied Test at the Brisbane Convention Centre ahead of the First Test Match between Australia and the West Indies at The Gabba cricket ground, Brisbane, Australia.(Photo: Nick Wilson /ALLSPORT)

Valid concerns about Covid-19 have morphed into excuses for self-interested behaviour by cricketing superpower nations such as England and India, which are refusing to tour in countries lower down on the ladder.

In late 1960, Frank Worrell, the first black captain of the West Indies, took a talented but untried team to Australia. In the first Test at Brisbane’s Woolloongabba, his side started poorly, dawdling to 65 for three, before the effervescent Garry Sobers weighed in with a whirlwind 132 in a shade under three hours.

Although the Windies reached a comfortable 453, the Aussies passed it thanks to Norm O’Neill’s 181, establishing a slender first-innings lead. After five days of fluctuating fortunes, the Test ended in a tie, cricket’s first ever.

So dramatic was the final over – featuring collisions that led to dropped catches, byes and a run-out via a direct hit by fielder Joe Solomon – the scoreboard froze.

Luckily, press photographer Ron Lovitt held his nerve as those around him were losing theirs. In one of the great cricket photos of all time, he captured the Test’s final seconds as pools of deep shadow fell across the ground. Taken from behind the wicket, full of long horizontals and dynamic verticals, Lovitt’s beautiful image launched the series and immortalised the sport. It is still a photograph for the ages.

The arrival of Worrell’s men a month before the first Test had caused concern in the upper echelons of the Australian game.

Cricket was in a sackcloth-and-ashes phase and the previous season’s tourists, England, ground out their runs with a sort of desperate caution.

Don Bradman, head of the Australian board, was concerned cricket was fast losing its cachet and authority. Scoring rates needed to perk up, he told Worrell and his opposite number, Aussie skipper Richie Benaud, otherwise crowds would head to the beach.

Sobers’ dynamic innings in Brisbane changed all that; the tied Test changed the conception of the game still further and Lovitt’s photograph preserved the sacred moment so it could be relived from a distance.

By the time of the fifth Test at the Melbourne Cricket Ground, Worrell’s men were new Australian darlings. They eventually lost the series 2-1, but captured the hearts of the Australian people to such an extent that they were given an unprecedented farewell for a touring team – a ticker-tape parade along Melbourne’s Collins Street to a reception hosted by the Lord Mayor.

Like movie stars, Worrell’s team were transported in 10 swanky convertibles. They travelled slowly enough to be kissed adoringly by many of Melbourne’s female fans.

A West Indian journalist travelling with the cavalcade wrote that the kisses were so “lavish” that before the civic reception, “lipstick needed to be washed from lips, cheeks and shirts”.

Those less inclined to sentiment and hyperbole (They Lost the Series – But They Won Australia ran the headline in a Sydney newspaper the next day) pointed out that, although Worrell and his men were fêted with a ticker-tape parade that drew 250,000, none of them would have been able to become Australian citizens. Australia’s all-white immigration policy was in place at the time and Worrell’s men would have been forbidden under law from becoming Aussie citizens.

The peculiarities of Australia’s racial policies aside, contrast the camaraderie and innocence of the Worrell tour with what passes for the behavioural norm in international cricket today.

Two weeks ago, to cite just one of many available examples, England cancelled a brief tour of Pakistan featuring two T20 internationals. They cited vague “security threats” as reason for the cancellation, although nobody believed them then and nobody believes them now.

The Foreign Office in Pakistan failed to corroborate the cited threats; indeed, they encouraged the England Cricket Board (ECB) to undertake the tour, and the nature of the threats was never shared with England’s hosts.

This was exactly the modus operandi used by the New Zealanders when, only hours before the start of a 50-over international in Rawalpindi only weeks before the England tour, they abandoned their first trip to Pakistan in 18 years, citing similarly vague security concerns.

What made England’s failure to honour their tour of Pakistan so much worse was that, in the English summer of 2020, the Pakistanis undertook a significant three Test, three T20 tour of England at the height of the Covid-19 pandemic. Despite 10 Pakistani players testing positive before the trip, the tour went ahead amid much palaver.

Although due to last only four days, the cancelled England tour of Pakistan in September was seen as partial payback for Pakistan’s commitment to England last year, with a longer tour planned in 2022.

“At the time of Pakistan’s arrival last year,” wrote Mike Atherton in The Times two weeks ago, “Covid death rates in this country were the third-highest in the world, more than 150 times the rate in Pakistan. Still Pakistan came, keeping who knows how many professional cricketers and support staff in their jobs.”

Were these two examples of recent failures to tour Pakistan exceptional, they wouldn’t constitute a trend.

The problem is that cancellations, postponements and abbreviated tours (such as England’s white-ball tour of South Africa 20 months ago) have become regular, as was the case with India’s cancellation of the fifth Test in Manchester after their assistant physio tested positive for Covid-19 last month.

The pandemic is a real and present threat, but valid concerns about Covid-19 have imperceptibly morphed into excuses for self-interested behaviour and, in England’s case, crass rudeness.

Earlier this year the Australian Cricket Board (ACB) postponed a red-ball tour of South Africa after Cricket South Africa (CSA) bent over backwards to accommodate their increasingly peculiar demands.

Such demands included the building of a fully equipped outdoor kitchen where the Australians’ meals would be cooked and served. After taking their hosts to the brink with promises they would tour if their needs were met, the Aussies pulled out only days before they were due to arrive.

Such bad behaviour has so far been confined to the so-called Big Three of the world game, England, Australia and India. Where once Covid-19 was a common threat, it is now being wielded as a stick with which to manipulate the less fortunate.

One cannot imagine a less financially secure board – a Sri Lanka or West Indies, say – being excessively demanding before a tour of Australia or England before postponing. One can’t because such boards are obliged to be pragmatic. They don’t want to expose their players to harm or illness but, at the same time, need the money that accrues from touring.

As Andrew Breetzke, the CEO of the SA Cricketers’ Association (SACA) says: “The rhetoric about the global game has been revealed to be empty by Covid-19.”

Such an environment is unhealthy for everyone because it leads to cynicism, opportunism and corruption. Unlike in Worrell’s time, modern international cricket is a sport without a moral, governance or scheduling compass, where the rich do what they like with a kind of blithe entitlement.

A breakaway league or a split down the middle of the world game is not necessarily inevitable, but battle lines are being drawn.

Ramiz Raja, the new head of Pakistan cricket, said after the England cancellation that the global community needed to act with “honour and dignity”; this Pakistan had done, but “they had got nothing in return”.

How long, then, before the slighted and marginalised in the world game decide to go their own way? DM168