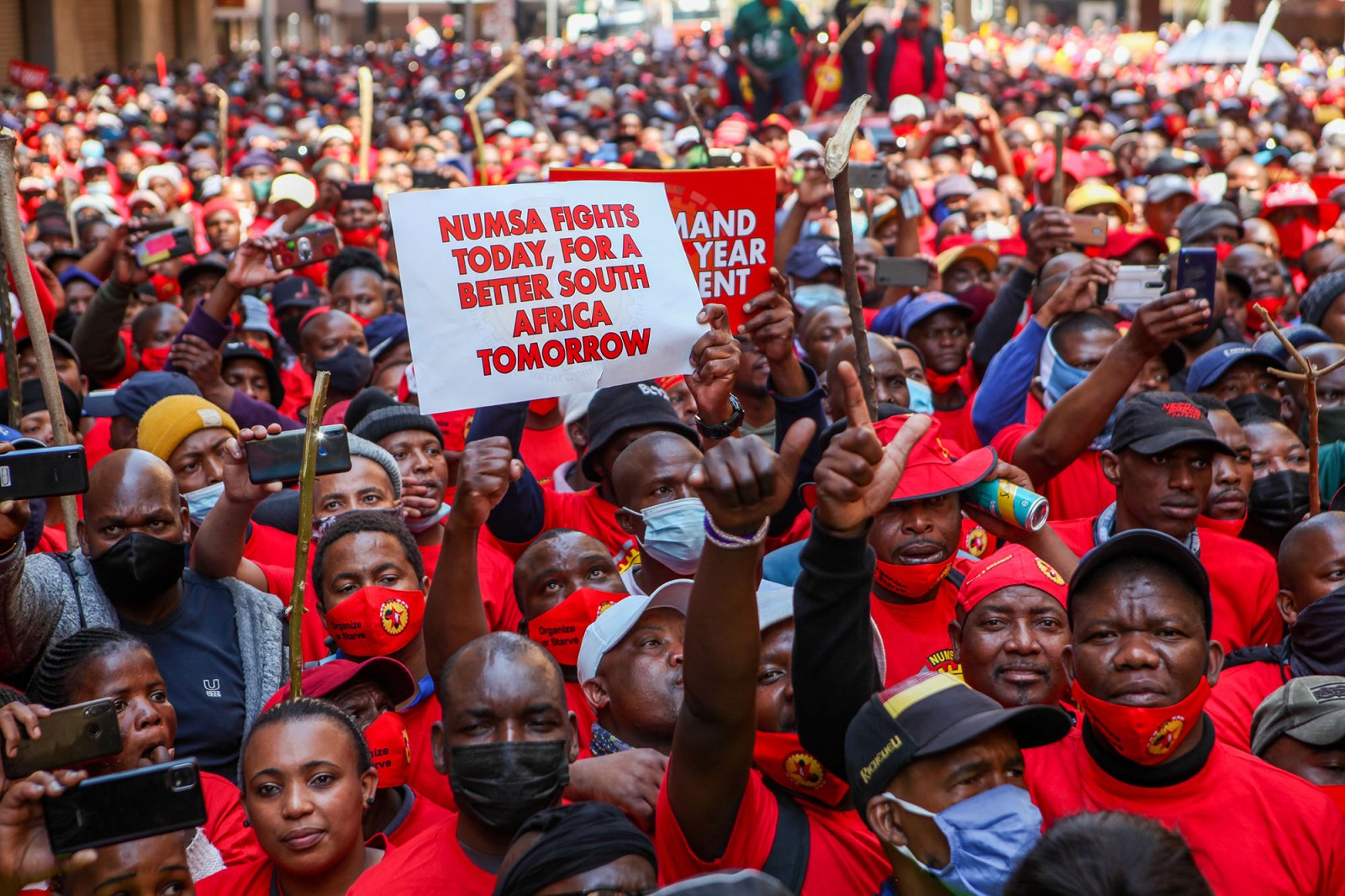 Shop floors at steel factories across the country were abandoned by 100,000 workers last week. The beleaguered steel industry has warned of a ‘jobs massacre’ if the strike continues.

Theunis Duvenage’s factory in Brits in North West, which uses steel as a raw material to produce goods such as roof sheeting and rainwater gutters, has been in rapid decline over the past three months, with production levels falling by as much as 50% and profits withering.

Duvenage, the CEO of SS Profiling, buys hot-rolled and galvanised coil, a form of flat steel, from ArcelorMittal SA (Amsa), the price of which has shot up by more than 40% since early 2020 because shortages after the Covid-19 pandemic and related lockdowns caused supply disruptions.

He also imports a variation of steel and raw materials from China that are not available in SA – a purchase that attracts an import duty of 10% imposed by the government to protect local manufacturers such as Amsa, Africa’s biggest steel producer.

Rising steel prices and the import duty have made producing roof sheeting and gutters by SS Profiling more expensive at a time when the demand for these products has been in decline. SA’s broken economy is not leading to big-ticket construction projects, which require steel products.

“Our factory and heavy machinery have not been running at full capacity. My workers are increasingly standing idle at our factory because demand for our products has dropped to a very low level,” Duvenage tells DM168. To reduce costs, SS Profiling has had to cut the workforce at its factory in Brits by more than half over the past three months, from 60 to 20 workers.

Now the steel industry faces a new threat that could lead to a jobs massacre. On 5 October, about 100,000 workers affiliated with the National Union of Metalworkers (Numsa) embarked on a national strike relating to a dispute over salary increases for the next three years. The strike has left employers on edge because it is indefinite.

The strike may be worse than the 2014 industrial action in the steel industry, which lasted four weeks and cost the industry between R300-million and R500-million a day, or R6-billion for the broader economy, as production stopped and the economy was starved of steel.

Two other medium-sized steel industry players, which have a combined workforce of 3,400, told DM168 that they would have to consider cutting jobs if the Numsa strike was prolonged. Both companies refused to be named because formal consultation processes with their labour constituency had not begun.

Mike Benfield, CEO of Macsteel, the largest steel merchant in SA and Amsa’s largest customer, says most of the company’s factories in Cape Town, Durban, Bloemfontein and Johannesburg were completely shut as a direct result of the strike. Macsteel has a workforce of 2,500 in South Africa and “roughly 45% or 50%” of its workers have joined the Numsa strike.

“The losses caused by the shutdown run into millions of rands per day. Our customers are being impacted as they cannot work or receive inventory. As a general industry, we are not earning revenue while we are incurring fixed costs.”

The steel and engineering industry is important for South Africa’s economy as it represents nearly 2% of economic output and is responsible for 190,000 direct jobs. Its supply chain is long; steel is used in skyscrapers and bridges, cars and cruise ships, guns and washing machines.

Amsa is not prepared to say if the strike has already caused supply disruptions to its customers. “It is difficult to speculate on the impact of the strike as there are many factors that would influence this, including the extent and reach of the strike and how long it lasts. However, contingency measures have been developed to limit the impact on ArcelorMittal SA,” the company told DM168.

Amsa has become the face of the industry’s decline over the past decade. Its problems have been caused by self-inflicted blunders along the way. It was found by competition authorities to have engaged in anti-competitive behaviour for which it was slapped with a R1.5-billion fine in 2016. Amsa’s other problems have been caused by market forces and the company has battled to keep up with high electricity, rail and port costs.

In 2015, China launched an aggressive plan to overthrow Japan as the world’s largest steelmaker. China’s government offered subsidies to its steelmakers, helping them to undercut competitors and flood the world, including SA, with cheap steel. The subsidies were in contravention of World Trade Organization rules. Amsa looked to the SA government for help, asking it to impose import duties on local companies that buy steel from China. This hasn’t helped much because companies such as SS Profiling are still looking to China for the supply of steel and other raw materials.

Steel companies asked workers to consider market conditions when they tabled their salary increase demands. For more than four months, Numsa and employers – some of which are represented by the Steel and Engineering Industries Federation of SA (Seifsa) – have been in talks about a three-year salary increase deal for the industry’s 200,000 workers.

Numsa has demanded an across-the-board salary increase of 8% for one year (2021), then an adjustment of consumer inflation plus 2% for the following two years. This works out to increases of just more than 6% for 2022 and 2023. But employers are not entertaining Numsa’s salary adjustment demands. They have tabled a 4.4% increase for 2021, an inflation plus 0.5% increase in 2022, and inflation plus 1% increase in 2023. Numsa rejected the offer by employers, triggering the national strike.

Lucio Trentini, CEO of Seifsa, believes the 4.4% salary increase offer is “fair and morally defensible”. “Entry-level salaries for companies that fall under our federation, which  [are] the vast majority of employers,  [are] R12,500 per month. We are talking about a general labourer in the sector with guaranteed statutory benefits ranging from a pension fund to family responsibility leave. The R12,500 is set to increase with the 4.4% offer.”

But Irvin Jim, the Numsa general secretary, called the 4.4% offer an “insult”, saying that workers had to forgo salary increases in 2020 because of the Covid-19 pandemic, which brought the steel industry to a halt during the hard lockdown.

Arun Chadha, the CEO of Allied Steelrode, which employs 350 workers at a factory level, sympathises with the workers. “They have not received an increase in nearly two years. Some parts of the industry are more affected by the Covid-19 pandemic than others. But most of the industry, with the rising steel prices, has done very well in terms of their profitability. I thought they would have gladly given salary increases to workers.”

DM168 understands that Seifsa and Numsa are close to reaching an agreement. Numsa is open to embracing a compromise, only if steel employers sweetened their offer by at least a percentage point or two. A deal is expected to be announced on Monday, 11 October. DM168