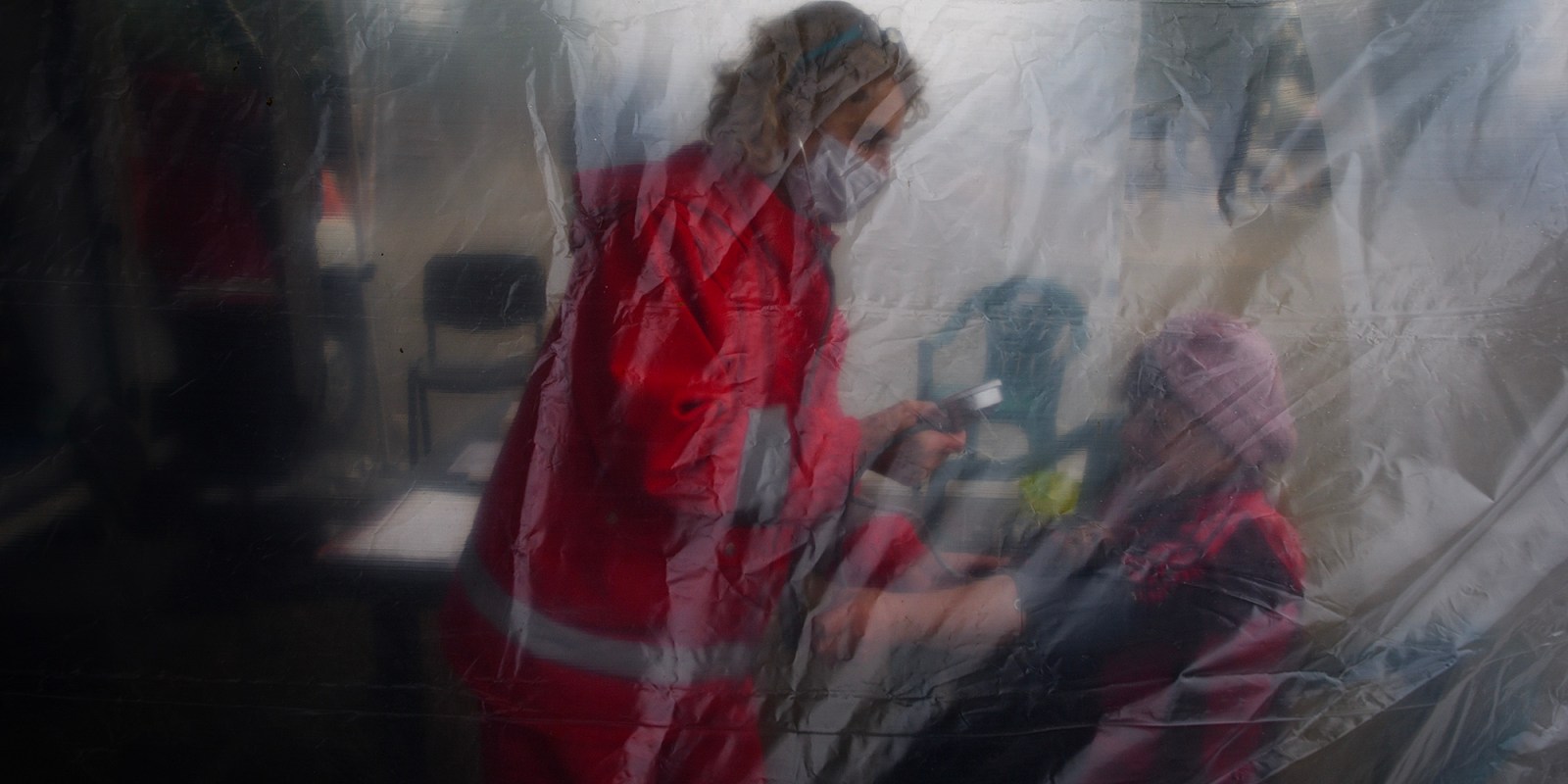 A women receives medical examination before a vaccine against Covid-19 from a mobile immunisation team in the village of Krushovitsa, Bulgaria, on 10 October 2021. (Photo: EPA-EFE / VASSIL DONEV) 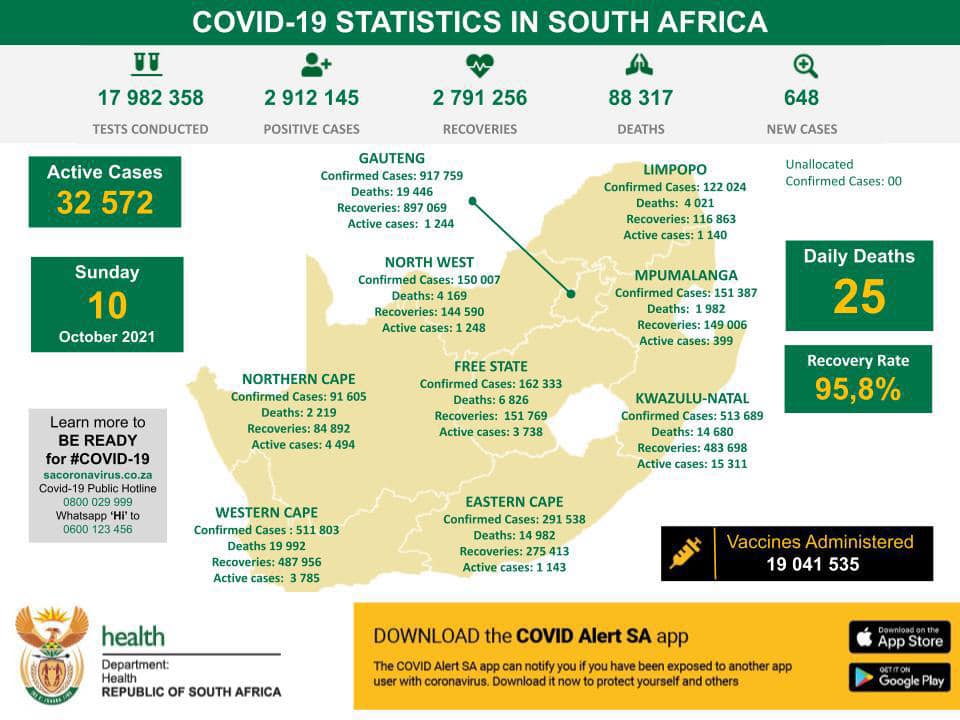 Anthony Fauci said infections in the US remain too high for a return to normal. “We have to just be careful that we don’t prematurely declare victory,” President Joe Biden’s chief medical adviser said.

The UK faces a pilot shortage as the travel industry reopens after hundreds of aircrew took early retirement or changed careers during the pandemic.

Australia will soon allow crowds at sporting and cultural events in Victoria state, and Sydney is set to emerge from lockdown on Monday. On the same day, Indonesia will reopen the popular tourist destination of Bali to foreign visitors.

Most parents who aren’t vaccinated against Covid-19 say they won’t have their kids aged five to 11 get a shot, according to a CBS News/YouGov poll. In contrast, 61% of parents with vaccinations said they’ll have their children inoculated — the same as the share of unvaccinated parents who said they wouldn’t.

About a quarter on both sides signalled they were undecided. The poll, published on Sunday, has a margin of error of plus or minus 2.6 percentage points.

Kids in the 5-11 age group could get a vaccine as soon as the first week of November. Pfizer and BioNTech said on Thursday they’d finished submitting data to the Food and Drug Administration ahead of an advisory panel meeting set for October 26.

People are “twice as likely to die” from having both Covid-19 and influenza, compared with just having the coronavirus, a British health official said.

Jenny Harries, head of the UK Health Security Agency, told Sky News the country’s at risk of “multi-strain flu” this year as last winter’s virus levels — when much of the country was locked down or practising social distancing — were low, meaning lower immunity this year.

“We are likely to see flu for the first time in any real numbers co-circulating with Covid, so the risks of catching both together still remain,” Harries said.

The UK last week started its biggest-ever flu shot drive and hopes to give the annual vaccine to 35 million people.

Fauci says no victory yet over virus

Anthony Fauci said infections in the US remain too high for a return to normal.

“We have to just be careful that we don’t prematurely declare victory,” President Joe Biden’s chief medical adviser said on CNN’s State of the Union. While average daily infections have fallen to about 95,000, from an average of more than 150,000 a day last month, “that’s still way too high.”

Biden declared “independence” from Covid-19 on 4 July, only to see the Delta variant push infections to record levels in many states.

Fauci said that children could enjoy Halloween, particularly outdoors, but added that “it’s a good time to reflect on why it’s important to get vaccinated”.

British ministers are concerned that a lack of pilots could impede a rebound in flights to pre-pandemic levels, the Telegraph newspaper reported.

At least double the usual number of pilots retired during the time when most travel was banned, the newspaper said, citing sources in the aviation industry. Activity is now growing steadily, according to weekly seat capacity estimates from OAG Aviation. UK capacity surpassed Germany and France in August after lagging for many months though it’s still 45% less than two years ago.

While the UK has recently eased entry rules for foreign travellers in a bid to boost tourism, post-Brexit labour shortages are threatening the nation’s economic recovery. A lack of truck drivers has contributed to a fuel crisis.

Indonesia saw a continued slowdown in its virus spread on Sunday, an encouraging sign as it prepares to relax its borders and welcome foreign tourists back to Bali this week.

The Southeast Asian nation added 894 cases and 39 deaths on Sunday, both the lowest since June 2020, as it benefits from an aggressive test-and-trace campaign to contain the Delta outbreak. The government has already lifted lockdown measures for large parts of the country and reopened offshore visa applications, following the strategy of its neighbours to start “living with the virus”.

Inexpensive, portable air filters can efficiently remove coronavirus particles and other pathogens from the air, Nature reported last week, citing a study by doctors in a working hospital. Vilas Navapurkar, an intensive-care unit physician at Addenbrooke’s Hospital in Cambridge, UK, and a co-author of the study, said filters might be more important to use in general wards than in ICUs.

The UK government bought 100,000 doses of GlaxoSmithKline’s Covid-19 antibody drug Sotrovimab, the Telegraph reported on Saturday, to boost the nation’s range of treatments in the event of new virus variants emerging. Antibody treatments can prevent Covid patients from becoming severely ill. Sotrovimab is yet to be approved by UK regulators and the deal is subject to approval, the newspaper said.

Malaysia will lift a months-long ban on local interstate travel from 11 October after fully vaccinating 90% of the adult population, Prime Minister Ismail Sabri Yaakob said on Sunday. In addition, citizens who have had both doses will no longer be required to apply for the MyTravelPass programme to travel overseas, he said in a televised broadcast. The Southeast Asian nation’s rapid vaccine roll-out has enabled curbs on movement to be lifted as the government aims to reopen all economic and social activities this quarter.

London Metal Exchange Week returns, but on a smaller scale

An annual gathering of metals traders and producers, London Metal Exchange Week, returns this week after skipping 2020 due to virus restrictions. The champagne will flow, but banks, brokers and miners have planned fewer parties at the famously rowdy event because many attendees from Asia, the most important driver of metals demand, and from South America, the key mining region, are opting to stay at home.

Australian Prime Minister Scott Morrison said that he’s in talks with the New South Wales state government in a bid to accelerate a plan to open international travel. Should a state-led, home-quarantine programme be fast-tracked, “we will be able to move to facilitate the opening up of the international border” at federal level, Morrison said in a video on Facebook.

Morrison’s comments come as governments elsewhere move to ease travel curbs. On Saturday, Singapore said it would allow vaccinated travellers from nine more countries including the US to enter without having to quarantine. Australia was not among those included, despite Morrison announcing earlier this month that bans on international travel will be lifted in November.

Singapore to ramp up booster programme

More than 435,000 seniors aged 60 or above in the city-state of Singapore have had Covid-19 booster shots or booked them, Senior Minister Teo Chee Hean said in a Facebook post on Sunday. On Saturday, the government announced a major expansion of the nation’s booster programme, dropping the age limit for additional jabs to 30, as well as including healthcare and frontline workers who received their two-dose regimen six months ago. In recent days, the Southeast Asian nation has been reporting more than 3,000 daily cases.

Authorities in Australia’s Victoria state announced on Sunday that crowds will be incrementally allowed to sports and cultural events in Melbourne within weeks, as key vaccination thresholds are reached.

Up to 10,000 will be allowed at the Melbourne Cup horse-racing event on 2 November, while an outdoor concert in Australia’s second-largest city will be held on 30 October. The move comes as Victoria prepares to remove lockdown restrictions, with 80% of people aged 16 and over expected to have had both jabs by 5 November.

The announcement comes even as Victoria recorded 1,890 infections on Sunday, slightly down from Saturday’s record high of 1,965.

New South Wales state recorded 477 Covid-19 cases on Sunday. The vast majority were in Sydney, which is easing lockdown restrictions from Monday. Meanwhile, New Zealand recorded 60 cases, with 56 of them in Auckland.

Saudis Arabia mandated full vaccination to engage in most public activities, state-run SPA reported, citing the interior ministry. The mandate, which will be in effect from 10 October, covers all commercial, economic and cultural activities, sport and tourism venues, scientific and social events, as well as government and private sector facilities. Passenger aircraft and public transit are included.

The US gave more than seven million vaccine doses in the past week, the most since early July. The increase has been driven in part by the demand for booster shots. Of the 1.15 million doses reported on Saturday, boosters made up 502,000, Cyrus Shahpar, the White House’s Covid-19 data director, tweeted.

Demand has been rising steadily since third Pfizer doses have become more widely available in the past two weeks, according to the Bloomberg Vaccine Tracker. The US has given 7.79 million third doses since they became available to the medically vulnerable in mid-August, according to data from the Centers for Disease Control and Prevention.

Average daily vaccinations have fallen from a peak of more than 3.3 million doses in mid-April to about one million now. DM