Bark versus bite: Choosing a name for a US robotic dog doing research in Africa 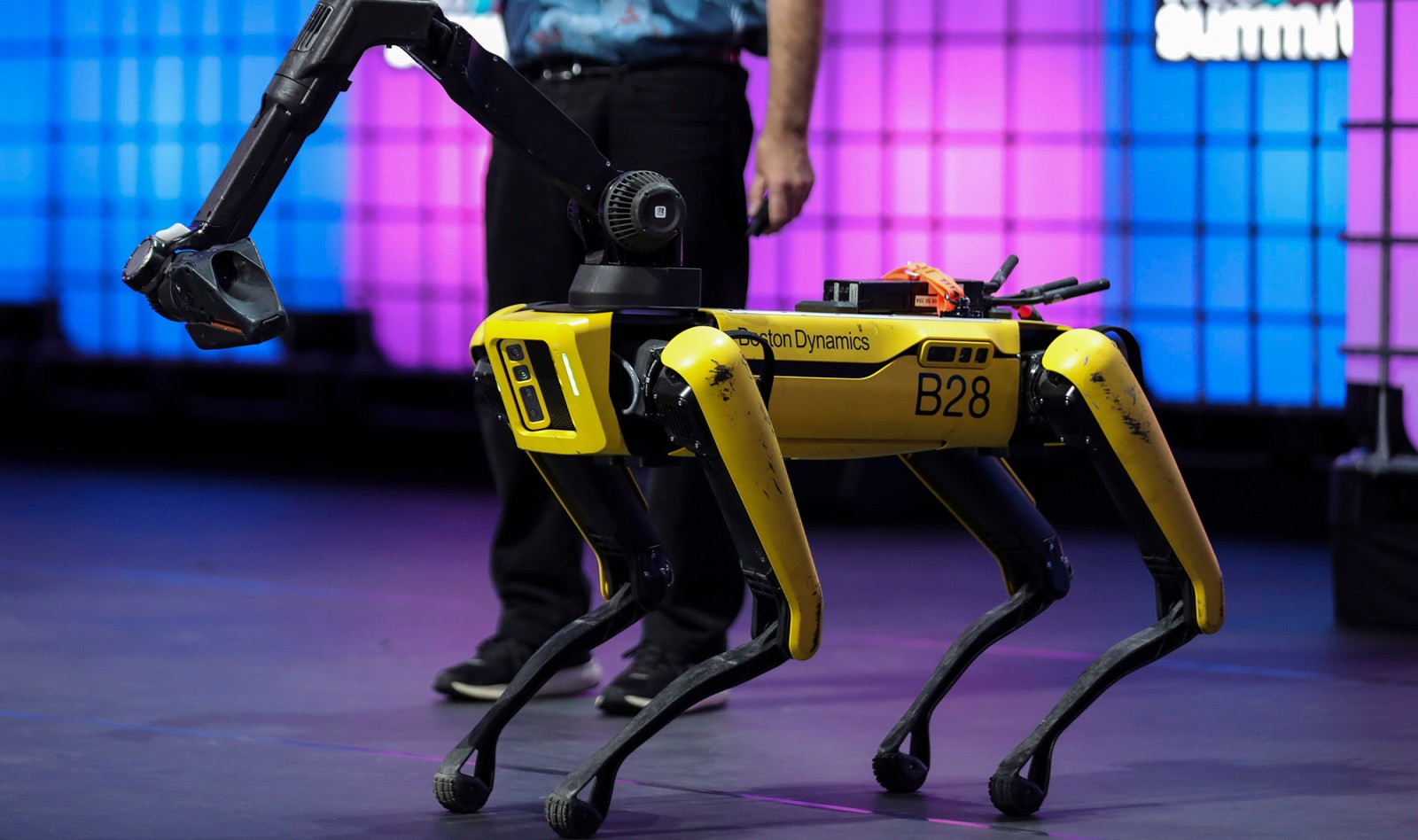 Spot, a quadruped robot by Boston Dynamics, is presented during the 2019 Web Summit at Atlantic Pavilion in Lisbon, Portugal, on 7 November 2019. (Photo: EPA-EFE / MIGUEL A. LOPES)

In a politically emotive social setting such as South Africa, the name of this robot must not offend any language group, class or race. The fact that Spot is a US robot that is now to be used in Africa for research and commercially driven purposes raises another set of deep epistemological questions.

I was recently woken on a Sunday morning by a telephone call from a senior colleague at the University of Johannesburg’s Institute for Intelligent Systems requesting me to participate in the naming of the institute’s newly acquired robot. Why must a lifeless machine have a name? I did not mind sacrificing my weekend morning because, indeed, naming a robot with features that mimic either human or animal physiological and behavioural traits is never a walk in the park. It is a field strewn with landmines of political, cultural and socio-aesthetical considerations.

The naming exercise is rendered much more complex when such a life-like robotic artefact has been manufactured in a country and cultural setting different from where it is to be used. The particular robot, in this case, is Spot, the dog-like robust and superagile, intelligent machine commercialised by Boston Dynamics, a US robotics company. Spot was fabricated to not only perform hazardous and challenging tasks that would typically be beyond the human body’s capabilities; it is intended to look, act and be treated like a dog. It is an animaloid, equivalent to a humanoid (human-like robot).

Spot is the generic name that the Boston Dynamics technology team chose to build this dog-like robot, leaving room for the brand to be adapted in a variety of commercial environments where the robots could be used. The Spot project marked a breakthrough in robotics as it successfully innovated unique engineering solutions that achieved a robot that could make physical-structural movements that were previously unreachable in robotics engineering.

Due to this success, Spot has proven that it can be deployed not only in dangerous and arduous industrial situations. The US army is developing Spot into a futuristic, indestructible, and immortal military dog. It is expressly useful in bomb-disposal exercises.

Recently, Spot made headlines when the New York City Police Department deployed it as “Digidog”. In Singapore, it has been conscripted to enforce Covid-19 regulations of social distancing by patrolling crowded public spaces. Spot has already generated its fair share of controversy in its short lifespan, and how it is deployed in South Africa will determine the future of its reputation and name.

As the Fourth Industrial Revolution advances, socially situated robots are increasingly not exclusively human-like. They include responsive and assistive animaloids, such as Spot. Intuitively, we have accorded these socially situated artefacts the standing of social robots. As the ascription of the humanoidic pronoun “he” or “she” to a pet is regarded as a sign of civilised human etiquette, one suddenly finds it uncomfortable to refer to Spot as an “it”. Accordingly, the sensitivities of animal rights activists must be taken into account in the naming and uses of this pet-like robot. In addition, the way Spot is treated must not inflect on our attitude towards animals. The missions this animal-like robot is deployed for must not perpetuate a culture of cruelty against animals.

As this dog-like robot is now co-existent in an animal-artificial social system with us, it certainly needs to have a name, which is a symbol of its relationality with us. In a politically emotive social setting such as South Africa, this name must be politically, socially and culturally correct. The name of this robot must not offend any language group, class, or race.

The fact that Spot is a US robot that is now to be used in Africa for research and commercially driven purposes raises another set of deep epistemological questions. Being in Africa and in the University of Johannesburg, this, for instance, immediately prescribes that this animaloid must bear the name of one of the majority spoken languages in South Africa. At the same time, such a name must resonate with the commanding artificial intelligence and physical capacity of this super dog-robot and the role it is to play in its service or interlocution with humans.

In Africa, naming a child or a new entrant into the family, for example, a newlywed daughter-in-law, is a ritual with a plethora of implications for the name-bearer. Assuming that the University of Johannesburg’s Spot will not be used for missions that could be viewed as hostile to society, such as being developed into a riot-control tool/partner for the protest-weary South African police, he would have a name that resembles an exclusion of such a role. He will not be named Wolfie, resembling the apartheid era wolf-like riotous assemblies control dogs.

As an acquisition by a university as a platform for advanced robotics engineering research, his role will hopefully be conceived as an assistive one. He could, for example, be cast in the positive assistive environment of emergency or disaster rescue missions or be further co-created with the mining industry to enhance deep-mining operations. As an enabler of research and education in robotics and the optimisation of enterprise goals in relevant industries, the trope of “helping” could fit its/his name. In the majority Nguni languages, “being helpful” is easily translatable into the name Siza (ukusiza).

But in naming this doggy-robot Siza or Msizi, which denotes a helpful person in isiZulu, will we not risk having His Majesty, King of the Zulu nation suing the university for giving a lifeless American dog a Zulu name? On the other hand, will the emergent trend of corporations sponsoring the promotion of the Afrikaans language collaborate enthusiastically in such a Zulu-like robot project? Will the EFF in Parliament support a police budget that includes the acquisition of Spot-Msizi? DM

Malesela John Lamola is an associate professor in Philosophy of Technology at the University of Johannesburg.