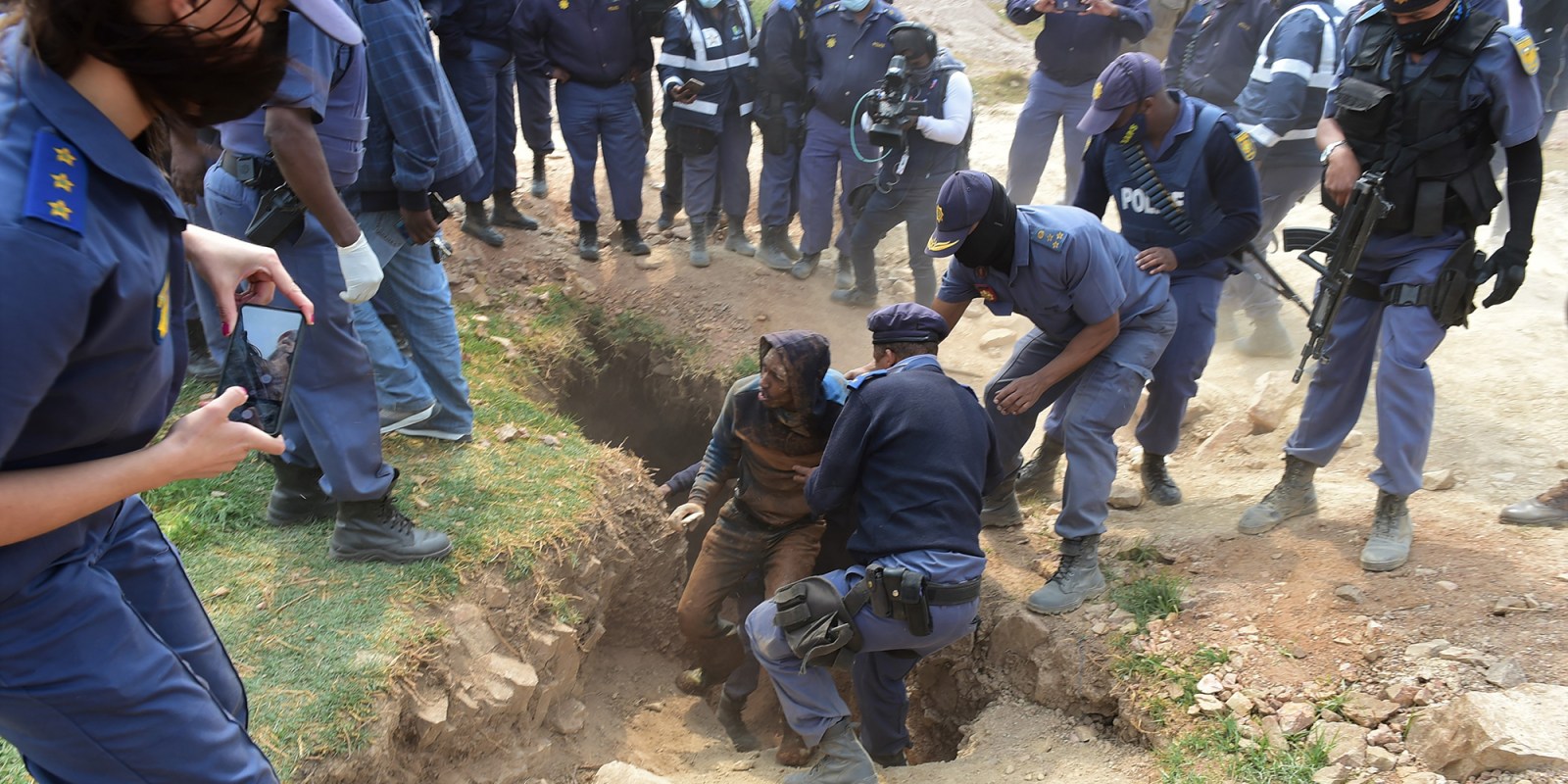 Six illegal miners were shot dead on Wednesday after a clash between zama zamas, mine security and police at Orkney. It followed the weekend surfacing of more than 500 illegal miners in the area after they ran short on supplies — and after the bosses apparently wanted the weak and the ill out of the shafts.

The South African Police Service (SAPS) said the gun battle erupted after a group of about 300 illegal miners attacked security guards and police in a bid to forcefully get food to their comrades in crime underground. Business Maverick understands the company involved is Chinese-owned, but could not verify that with the company. The police did not provide the company’s name.

“The arrests and shooting incidents came after a decision by the mine management to clamp down on illegal mining activities by closing the ventilation shaft which the ‘zama zamas’ had been using to enter and exit various shafts. The action effectively stopped the supply of foodstuffs and water to the ‘zama zamas’,” the police said.

“Consequently, some of the illegal miners voluntarily and due to shortage of food and water, used explosives to open a hole and started to exit the shaft on Saturday, 2 October 2021. On Sunday, 3 October 2021, more than 500 had already exited the shaft. They were thoroughly processed, including being medically examined for dehydration, before being released. Some were treated by paramedics while a few others were taken to hospital.”

The police statement went on to say that nobody exited on Monday and Tuesday, but more illegal miners exited on Wednesday and it was at this stage that some of them launched the attack which resulted in the deaths.

Thirty-five people had been arrested and charged with attempted murder, causing an explosion, malicious damage to property and conspiracy to commit crime.

“There are still 2,000 to 3,000 guys underground there,” a security source familiar with the matter told Business Maverick. “The miners who surfaced are the ill and the weak whom the zama bosses don’t want to waste resources on.”

The source added: “This is just the beginning. If they are launching attacks like this in broad daylight the situation is going to escalate.”

This unfolding saga is the latest in ongoing conflicts involving illegal miners.

In a presentation this week, Roger Baxter, CEO of the Minerals Council South Africa, said the “annual estimated commercial value of illegal mining, and illicit dealings in precious metals and diamonds” was between R7-billion and R20-billion, while related security costs to the industry were R2.5-billion per year.

“Illegal mining presents a range of negative socioeconomic impacts, including serious risk to the personal safety of illegal miners; impact on safety and health of miners in current operations; a negative impact on the environment, particularly through the use of mercury; damages and losses caused to operating mines and the introduction of criminal elements into communities; losses for the fiscus through unpaid royalties and taxes,” he said.

The problem has many roots, including the decline of the mining workforce over the past couple of decades and surging unemployment more generally in South Africa and neighbouring states such as Lesotho and Mozambique — trends that are creating an army of illegal miners.

Top it off with an incapable and corrupt state, and you get dramas like the one that just took place in Orkney. It won’t be the last. DM/BM