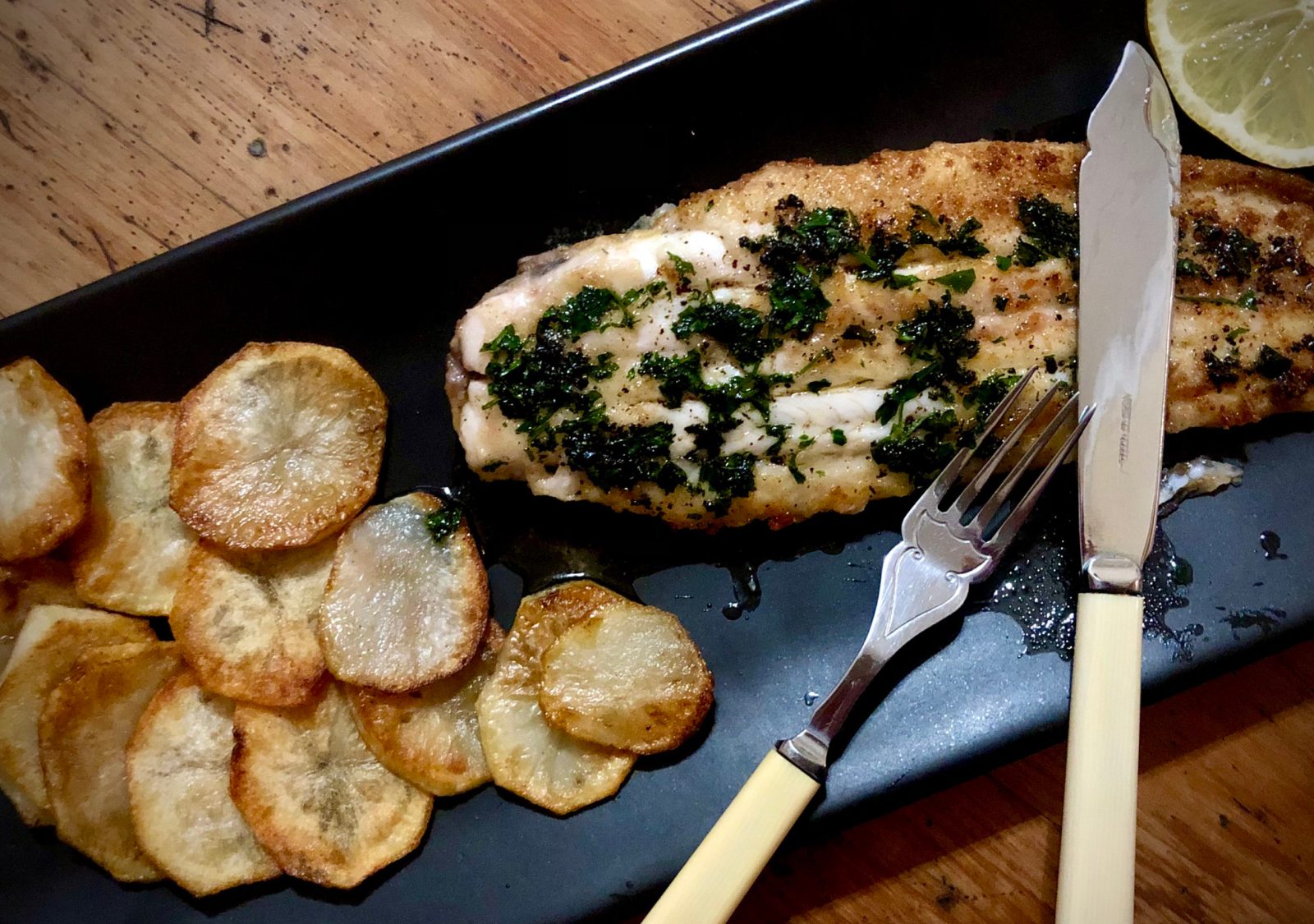 It was the dish that ignited Julia Child’s exemplary career as a television chef. It’s as simple as it is perfect. And it’s so good that there really is no point in cooking sole any other way.

Jupiter’s Sandal, anyone? That’s what you would order in ancient Rome where, if you fancied a fish to tuck into during your Bacchanalian feast or merely for your Tuesday night dinner, your first choice would be sole. These strange-looking creatures of the sandy depths of the sea are named after “solea”, Latin for the sole of a foot, and anyone who has seen the shape of a sole (fish) will see why immediately. They’re pretty creepy looking with their eyes both being on one side of their bodies.

I grew up in the Sixties eating Sole Meunière, which is a brown butter sauce to which lemon and parsley have been added, at least once during our annual tours of the country. It was always East Coast Sole, and it was always done that way in my memory. It didn’t occur to me that there were other ways of cooking it; why would anyone mess with a dish so simple yet so perfect? I like it that way to this day and I love the way you can just pull a piece of it away from the spine with a fish knife. I still regard Sole Meunière as fish perfection.

I remember my mom occasionally cooking steamed sole with mashed potato, but it couldn’t compare, for me, with Meunière.

Soon after she first went to Paris as an ambassador’s wife wondering what she would do to pass the time, Julia Child famously had a meal, the main course of which was Sole Meunière. She adored it, sighed and swooned, and it launched her on her new path in life and became the benchmark against which she would measure all other French food.

There are many other recipes for sole. Sole à la Cantonnaise (steamed with spices, chopped onion and fresh ginger); au gratin (baked with mushrooms and breadcrumbs); Marco Polo (poached in a Champagne-laced fumé made from crustacea shells) and Sole Robert Courtine (a complex recipe involving shallots, wine, sour cream and a white fish forcemeat), among others.

The worst sole I’ve ever eaten was at a Port Elizabeth (it was still called that) seafront restaurant where a whole sole was covered with a thick sauce and mashed potato, so that you couldn’t identify the fish at all. On a return visit I asked them if they could just fry me a floured and seasoned sole. Sure, they said, then brought me a sole which still had traces of that instantly identifiable sauce and bits of mash on it. They had quite obviously scraped off the nasty sauce and delivered it to me. It was mushy the way recently defrosted fish is mushy. We haven’t been back. Much rather go to the Ocean Basket next door where, if you order fish, you can see it on your plate and taste it.

In his The South African Fish & Seafood Cookbook, the venerable Peter Veldsman has a recipe for fillets of sole steamed with lemon, wine vinegar and a fish fumet, and a variation steamed with artichoke hearts. In her Fresh From the Sea, the late, great Lannice Snyman shared another classic for this fish, Sole Véronique, poached with mushrooms, tarragon, wine and sultana grapes. Snyman described our two varieties of sole, west and east coast, saying that the latter was smaller and more prolific “and more highly esteemed”. She also remarked that “simple, classical dishes bring out the flavour (of sole) best”. Which underscores my point about the perfection of Sole Meunière.

2 x East Coast Soles, about 260g each (or whichever size you have)

90 g unsalted butter, of which 2 Tbsp is for frying the fish

Rinse the fish under cold water and dry thoroughly. Season both sides with salt and white pepper.

Chop the parsley very finely. Have a halved lemon ready, and more wedges for the servings.

Put the flour in a flat container (such as a plastic bakkie) and season lightly with salt and white pepper. Shake it and mix so that the seasoning spreads evenly. Dip the soles in this on both sides and their edges.

Heat the oil and 2 Tbsp clarified butter in a pan. When the butter is foaming, add the fish, give the pan a shake and then leave them alone, untouched, to cook for 2 to 3 minutes. Turn carefully and cook the other side for not more than 2 minutes. Remove to warmed plates and cover with a foil “tent” while you quickly prepare the sauce.

Add the remaining 60 g of clarified butter to the pan, melt gently, and stir in the parsley and lemon juice. I squeeze it in through a fine sieve, to catch any pips.

Serve immediately, pouring the sauce over the fish. I served them with fried potato scallops, which are cut thinly into rounds from small potatoes and pan-fried gently in butter and a little olive oil until crisp and golden. DM/TGIFood