The stadium that isn’t: An Eastern Cape village’s R15m ‘sport facility’ in a rural community that has no water 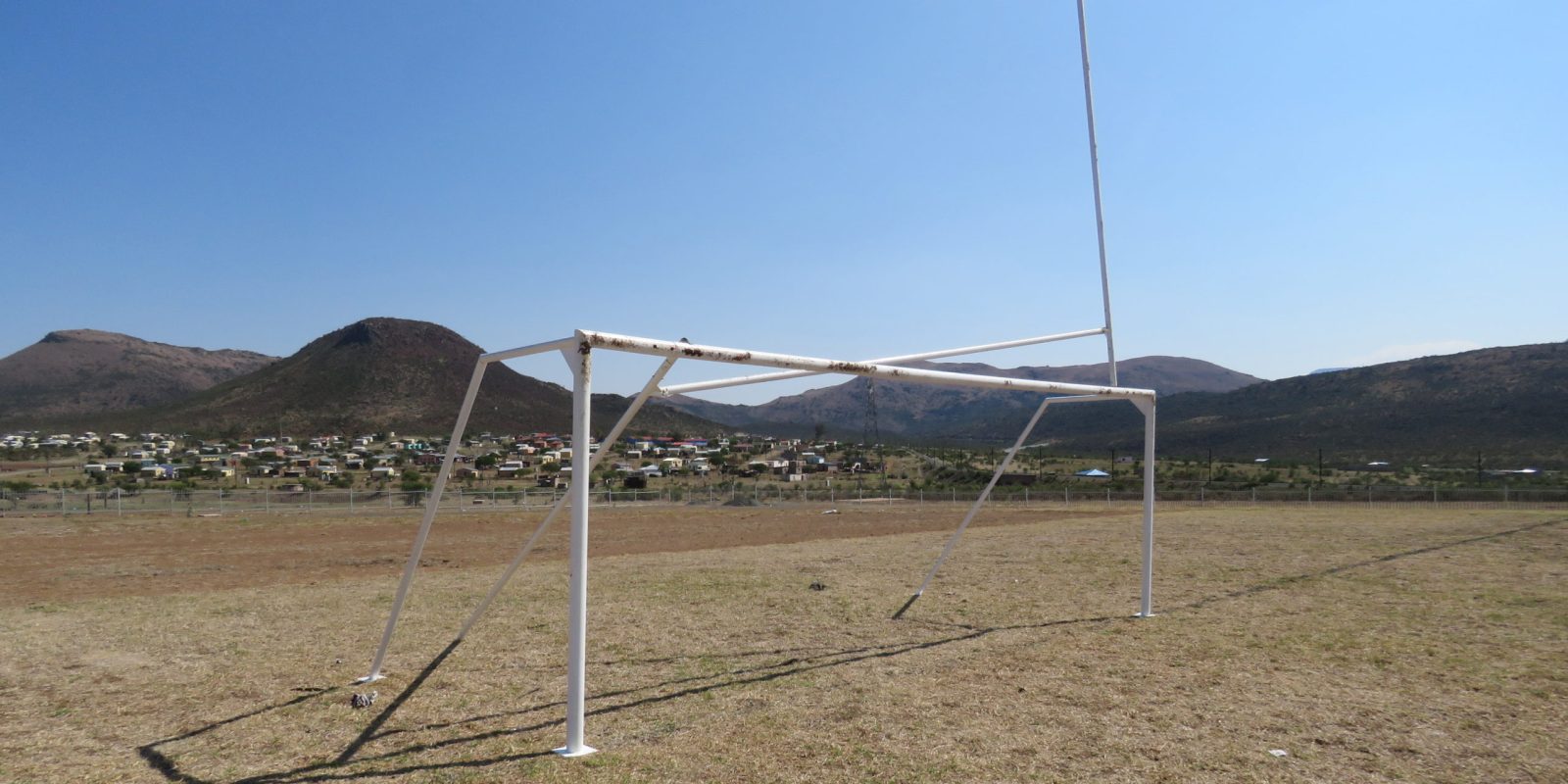 Residents of Lesseyton village in Komani in the Eastern Cape, where Enoch Mgijima municipality built a shoddy ‘stadium’ for R15-million, have to travel three kilometres to get water from a nearby river or hire a bakkie to collect water at a cost of R500. This has been going on for 15 years.

The bumpy, dusty roads with low lying bridges are a nightmare to drive on, especially on rainy days. Opposite the community hall is the R15-million Lesseyton Stadium, images of which were shared across social media this week. The stadium has no electricity or running water, a rough turf, broken goalposts and a half completed affair which resembles nothing close to an athletics track. Rocks hold the grandstands in place.

A stone’s throw from the stadium, unemployed Lumko Mbenene stood in his home – a home without running water.

“I don’t know why they built this stadium knowing that the area has been without water for 15 years. Instead of building the stadium, they should have dug boreholes in the village, created jobs and fixed the bad roads,” Mbenene said.

He said the stadium was just a way of “stealing money” from the people of Enoch Mgijima.

“How are the players going to use the showers and the toilet when there is no water? There is no electricity which means no games will be played at night and only soccer will be played,” he said.

Mbenene said the goalposts broke the day they were installed.

Fellow resident Tembile Waxa said half of the R15-million that was budgeted for was never used.

“The stadium cost almost R3-million. Corruption, money laundering and price inflation are the causes of this low-standard stadium. The community is angry and wants answers from all those involved,” he said.

“We want to know where the money is and the forensic investigation will expose all those who are involved in this,” he said.

Congress of the People councillor, Nomazotsho Kopolo, said that when the project started in 2018, the costs were estimated at R22-million.

“The contractor, Thalami Civils, was appointed and then stopped working the same year. They wrote to the municipality saying they can’t do the job and withdrew,” she said.

Kopolo said Thalami Civils was re-appointed in 2020 for a revised total of R15-million, with reference SCM/05/2018.

“The contractor was supposed to build a rugby field, soccer field, track and a netball field, but the stadium has only one field. Where are the other codes going to play?” asked Kopolo.

She said as members of the municipal public accounts committee (MPAC), they have been calling for a meeting with the contractor but this never seems to take place

“As MPAC we did not do oversight and I was shocked to see the work done here. The tender was not advertised in 2020 and the supply chain processes were not followed,” she said.

According to Kopolo, on Monday someone with a loudhailer called on ANC members to attend a meeting at the Lesseyton hall.

“We were shocked to hear that they were handing over the stadium. They made it an ANC event,” he said.

On Thursday, Eastern Cape co-operative governance and traditional affairs MEC Xolile Nqatha visited the stadium. Nqatha gave Enoch Mgijima council speaker Bongiwe van Heerden 48 hours to write to the councillors who attended the handing over, while wearing ANC regalia, to give reasons why they shouldn’t be suspended for bringing the institution into disrepute.

“Wearing ANC regalia is against the code of conduct,” he said.

“Though I am not a technical expert, from my assessment this is pure wastage of money. The amount of money that is said to have been spent on this project is not justifiable. Hence it is important that someone must account for this waste of money,” Nqatha said.

“The fact that red tape that is used to cordon off a crime scene was used [to officially open the stadium]… there is a reason to forge ahead with an investigation,” he said

Van Heerden said she has taken the instruction from the MEC and will write to the councilors who attended the event.

All three declined to comment when approached by Daily Maverick.

Thalami Civils owner Luthando Jojwana confirmed that the cost of the stadium is R15-million and there is nothing sinister about it.

On the company’s website, among projects that have been completed, is the R4-million Tsomo taxi rank – which is not used by taxi operators as it is too small.

DA chairperson of the Federal Council, Helen Zille, said during a visit to the area on Thursday that the project was not worthy of the word “stadium”.

Zille said this was just another “get-rich-quick scheme” for some ANC cadres.

Enoch Mgijima municipal spokesperson Lonwabo Kowa said in a statement that the council was aware of concerns being expressed on social media around the Lesseyton sports facility.

“The municipality regrets the manner in which the initial post was shared, where minimal detail was provided. Considering the above, we deemed it necessary to provide clarity on the matter,” he said.

Kowa said the construction of the facility started at the beginning of March 2020 when the environmental impact assessment was approved by the Department of Economic Development, Environmental Affairs and Tourism, authorising the project within the limits stated in the National Environmental Management Act.

Further investigations were also conducted to determine the suitability of the site to be developed into a sports field with associated structures – which included survey, geotechnical and geo-hydrological tests.

According to Kowa, the project entailed:

Kowa said the municipality had made this investment in the rural village in support of sport activities in the area.

“This is aimed at providing the community, especially youth, with a facility that will serve as a suitable playing ground to benefit over six villages. The community has a rich history in sport and has also produced a professional soccer player which the municipality prides itself on,” he said

Chris Hani District Municipality executive mayor Wongama Gela said in a statement the matter had prompted a lot of questions, and that the district was taking this up with the local municipality. DM

The stadium that isn’t: An Eastern Cape village’s R15m ‘sport facility’ in a rural community that has no water