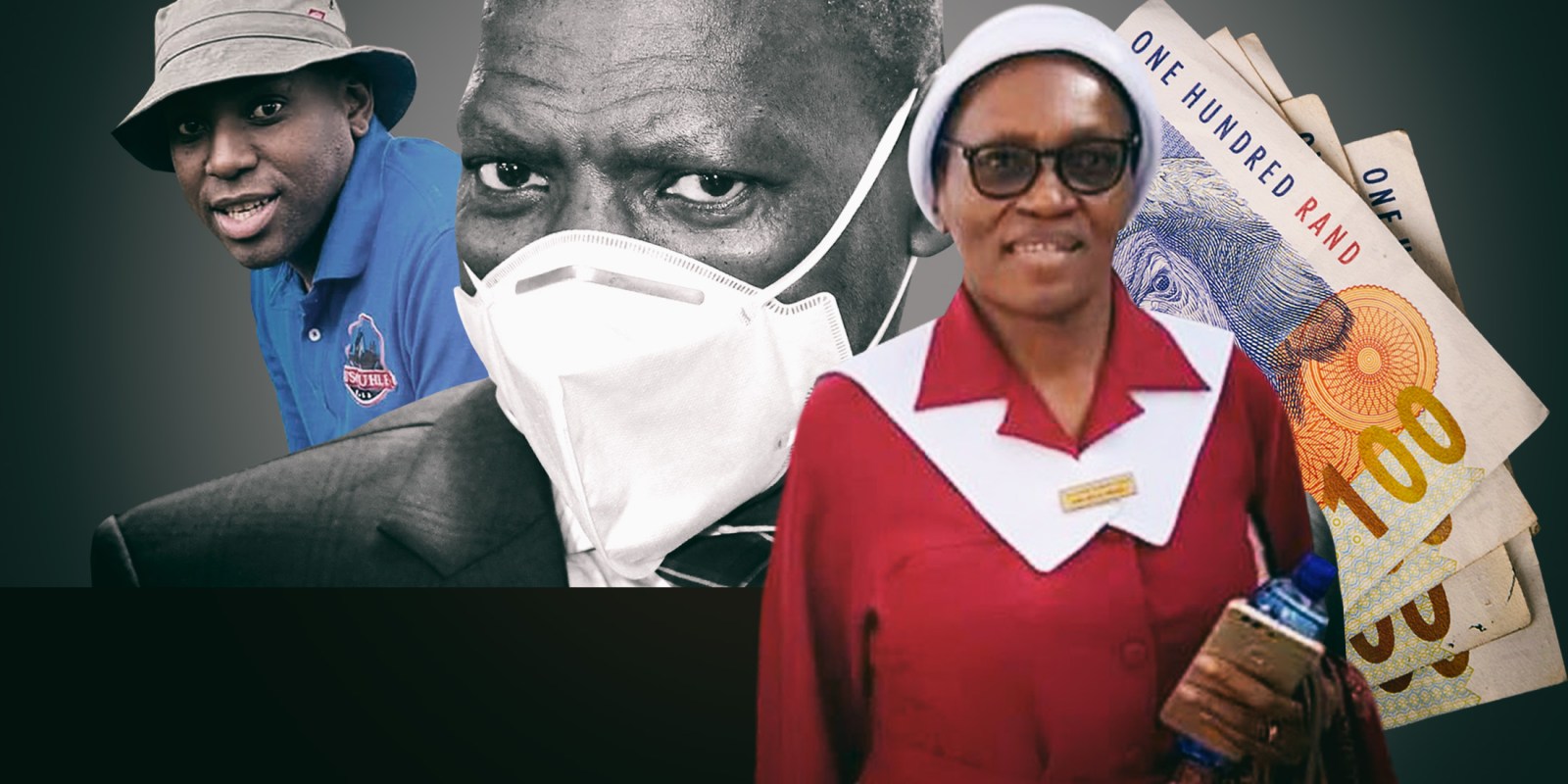 Nearly R2-million siphoned from the Department of Health’s Digital Vibes contract found its way to the state-owned Ithala Development Finance Corporation to help repay a loan for a farm owned by former health minister Zweli Mkhize’s wife. This and other new findings raise the total for the Mkhize family’s allegedly corrupt stake in the contract to nearly R9-million.

Fifteen years ago, Zweli Mkhize, then MEC for finance and economic development in KwaZulu-Natal, faced controversy when the state-owned Ithala Development Finance Corporation granted an R11.8-million loan to his wife to buy a farm near Pietermaritzburg.

As MEC, Mkhize was Ithala’s political custodian, but he rejected claims that he had influenced the entity’s decision.

His wife, Dr May Mkhize, was a “professional and a businesswoman in her own right who has dealings with other financial institutions”, Mkhize had stated.

But Daily Maverick/Scorpio’s latest revelations into the Department of Health’s (DoH) R150-million Digital Vibes contract all but confirm that May Mkhize’s business activities are at least partly funded through dubious transactions linked to her husband’s political career.

Thanks to new submissions from the Special Investigating Unit (SIU) filed at the Special Tribunal, viewed alongside material we’ve sourced and analysed over a period of several months, we can today illustrate in pointed detail how nearly R2-million from the DoH’s Digital Vibes contract made its way to May Mkhize’s loan account.

In other words, taxpayers’ money emanating from an allegedly corrupt contract awarded by the DoH when Zweli Mkhize led the department was utilised to help pay off his wife’s questionable loan from a state-owned institution.

We also shed light on further transactions involving a web of alleged slush funds for the Mkhize family.

Through these entities, some R1.6-million was funnelled from the Digital Vibes contract to businesses owned by Zweli and May Mkhize’s son, Dedani.

These latest revelations, coupled with our earlier exposés and the SIU’s own findings regarding payments to the former minister and his family, bring to R8.7-million the total of the Mkhizes’ alleged stake in the Digital Vibes deal.

This includes R3.4-million in cash payments Dedani Mkhize allegedly collected from recipients of some of the proceeds from the contract, according to the SIU’s filings.

Speaking through the attorney representing him at the Special Tribunal, Dedani Mkhize strongly denied that he had received any such cash payments.

“These allegations are untrue and this will be proven in due course through a court process and not newspapers,” said the attorney.

The series of transactions in 2020 that preceded the R1.88-million deposit in Ithala’s account, in favour of May Mkhize’s R11.8-million loan, leaves one with little doubt that the payment was made with the proceeds of the Digital Vibes contract.

In May 2020, the DoH transferred nearly R28-million to Digital Vibes in three payments for invoices the firm had submitted for its Covid-19 communications work.

Exactly one week after Digital Vibes received the last of these payments from the DoH, Digital Vibes began transferring large sums of money to Mateta Projects, a company unmasked in our earlier reports as an alleged slush fund for the Mkhizes.

Just over two weeks after Mateta had received the last of these payments from Digital Vibes, the company started making payments to Sirela Trading, a company run by Protus Sokhela, a business associate of the Mkhize family.

In three transactions effected between 16 and 18 June 2020, Mateta paid R2.3-million to Sirela Trading.

Finally, on 22 June 2020, four days after Sirela had received the last of its three payments from Mateta, Sirela paid the R1.88-million to Ithala in favour of May Mkhize’s loan from the state-owned lender, the SIU has discovered. 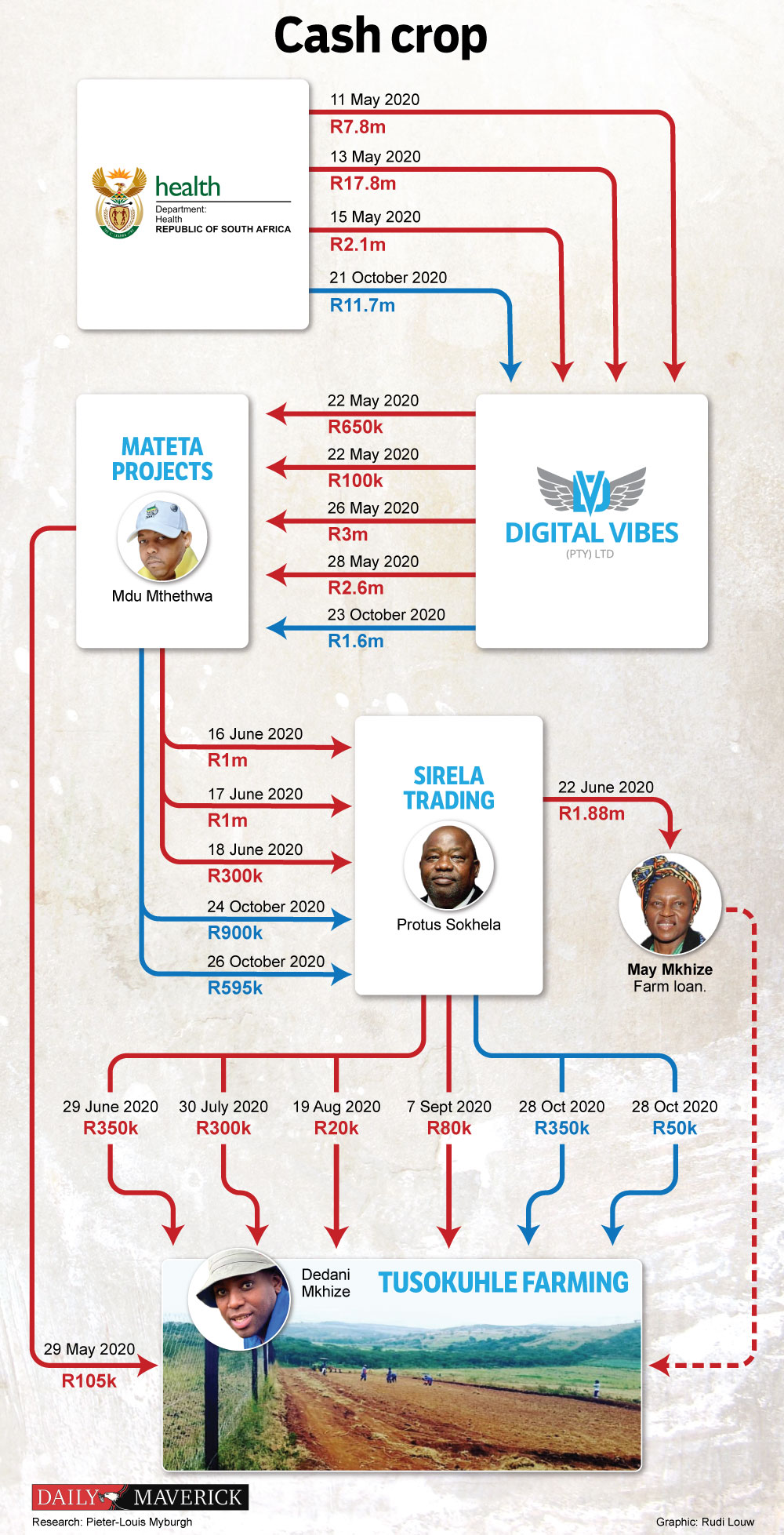 According to deeds office records, Ithala in 2006 granted the R11.8-million loan to Cedar Falls Properties 34 as a bond for the purchase of several portions of the farm Rietspruit near Pietermaritzburg.

May Mkhize is listed as Cedar Falls’ sole director.

The SIU evidently views this transaction as an alleged kickback linked to the Digital Vibes contract.

“Given the very serious implications of this transaction, the SIU will bring an application to join Dr May Mkhize and Cedar Falls Properties 34 in this application and to seek the repayment by her and/or her company of R1,888,727.84 being an unjustified benefit deriving from the proceeds of unlawful activities,” reads the unit’s latest filings.

May Mkhize told Scorpio she did not wish to comment on the transaction.

Dedani Mkhize’s lawyer,  who also spoke on Sokhela’s behalf,  said the SIU had based its latest affidavit on “assumptions” and had made “preposterous allegations against our clients without interviewing the parties concerned to establish the real facts.”

While Dr May Mkhize owns the Pietermaritzburg farm through Cedar Falls Properties 34, Dedani Mkhize appears to play a more active role in the farm’s management.

The farm’s business activities are managed through an entity called Tusokuhle Farming, which lists Dedani Mkhize and Protus Sokhela as its directors. May Mkhize used to be a director of Tusokuhle, but she resigned in 2018, according to company records.

Like Cedar Falls, Tusokuhle received a substantial windfall thanks to the DoH’s Digital Vibes contract.

Between 29 May and 28 October 2020, the company pocketed payments totalling R1.25-million from Mateta Projects and Sirela Trading. (See “Cash crop” graphic.)

Save for one payment of R105,000 directly from Mateta to Tusokuhle, the bulk of this money was flushed through Sokhela’s Sirela Trading.

Again, the sequence of these payments, starting at the DoH and ending in Tusokuhle’s account, leaves us with little doubt that we’re dealing with the proceeds of the Digital Vibes contract.

This is how one such series of payments transpired: On 21 October 2020, the DoH settled a large Digital Vibes invoice for R11.7-million.

One day after Mateta received the money, it forwarded R900,000 to Sirela Trading, followed by an additional transfer of R595,000 to Sirela on 26 October.

The SIU has also identified a payment of R350,000 linked to the DoH contract that went to another of Dedani Mkhize’s companies, All Out Trading, in August 2020.

We furnished Dedani Mkhize and Sokhela with a detailed account showing how the monies their entities received had originated from the DoH’s Digital Vibes contract.

“Both Dedani and Protus [Sokhela] maintain there were no ‘kickbacks’ paid to them as you allege,” said their attorney.

“Mr Sokhela categorically states that he has never benefitted from Digital Vibes, has no dealing with the company, its director or any of its representatives,” he added.

“We can confirm that Mr Sokhela and Dedani Mkhize jointly own and operate a farm. Therefore transactions that relate to their farm occur in the ordinary course of their business and can all be accounted for,” said the attorney. DM