Everybody wants to rule the world: The manifold factors that determine SA voters’ choices 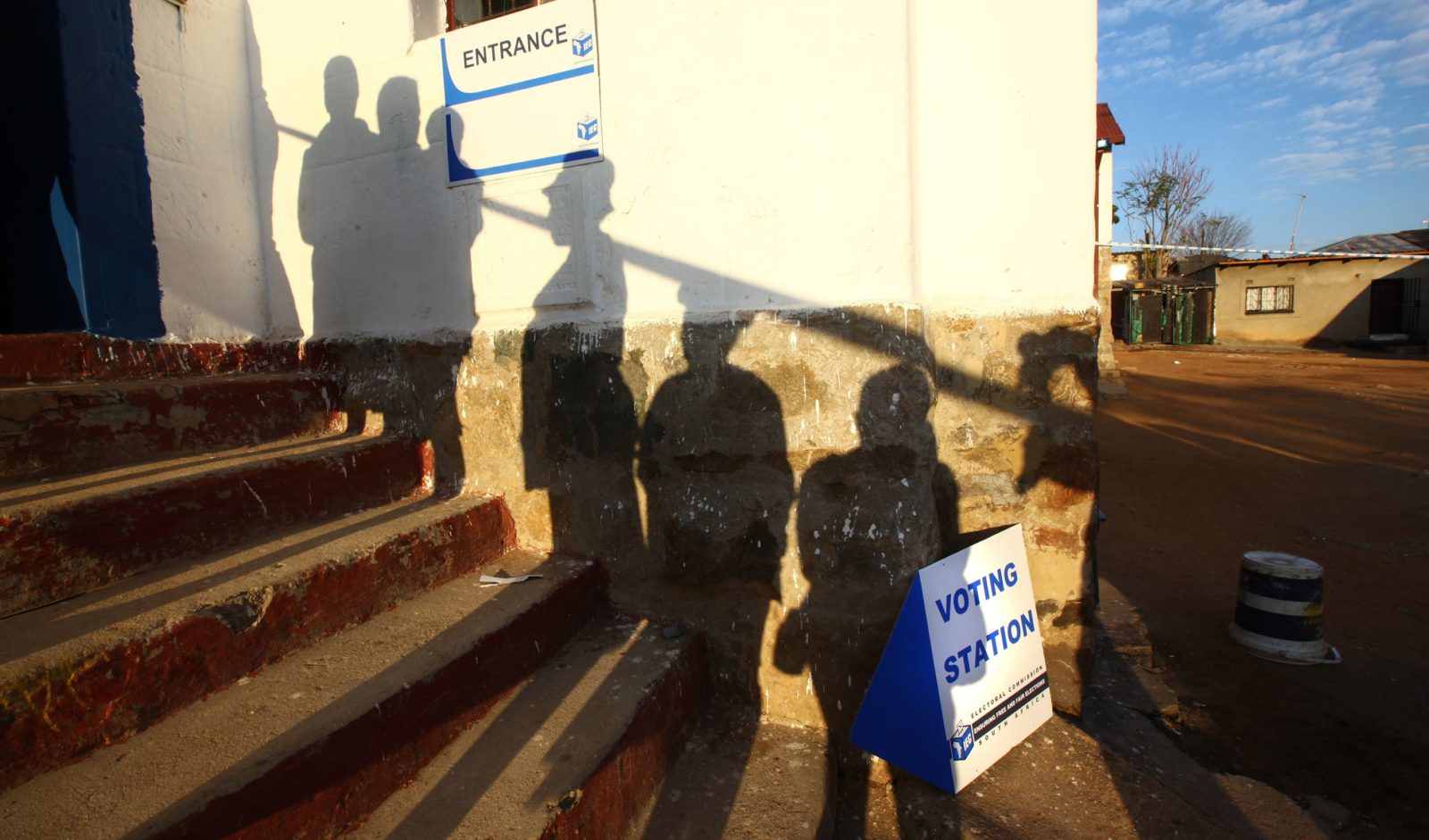 People queue in the early morning to vote in the 2011 local government elections at a church in Alexandra Township, Johannesburg. (Photo: EPA / Kim Ludbrook)

Pretty much every political party is promising an end to corruption, as well as to deliver clean water and electricity, to repair potholes and broken streetlights, and so on. That means voters make their crosses on the ballots not just because of pledges.

The Electoral Commission of South Africa (IEC) includes as reasons for voting that it’s the right of every South African 18 years and older, that it’s the “chance to stand up for the issues you care about”, to decide how and where taxes are spent — and because democracy only works when people participate.

Somewhat controversially the IEC also says, “Elections are decided by the people who go out and vote. If you don’t vote, someone else will make the decision for you. If you don’t vote you get stuck with other people’s choices — and you can’t even complain about it because you let it happen!”

South Africa’s municipal electoral system at ward level is effectively a “first past the post” system — whichever ward candidate gets the most votes, wins. But the proportional representation (PR) ballot is another voting choice opportunity.

No vote is lost as all ward and PR ballots are counted in what ends up as a rather complex seat calculation that ultimately shapes a municipality.

Nothing stops a voter in a metro from picking one political party representative, or an independent, on the ward ballot and making a completely different choice on the PR ballot. It’s up to three choices in a local municipality, as voters additionally get a choice for the district council.

The permutations of crosses on ballots in local government elections, at least in theory, are if not quite endless, then multifold. It could lead to very interesting results.

Voters generally cast their ballots based on the considerations that matter in their lives. What’s relevant to the mink and manure set and the chattering classes would be different for a working-class single mother or a rural family surviving on grants and remittances.

Confidence is another reason, as in a voter’s confidence that her or his chosen party has the capacity, structure and will to act on election promises. Here, perceived track record in office could be a yardstick, particularly if not aggravated by additional levies and charges, above-inflation tariff increases and inflated property valuations.

Aspiration, too, is a reason, and a message of improved services may well resonate sufficiently to change choices on the ballot. The flip side is the gatvol factor: spilled sewage, uncollected garbage and bucket toilets could change where crosses go on ballots.

This time round, on 1 November, the Covid-19 State of Disaster and lockdown — Friday is Lockdown Day 561 — are set to have an impact.

The Covid-19 personal protective equipment tender scandals that benefited the politically connected, and more recently the Digital Vibes corruption, sparked public outrage. The estimated one million-plus job losses, according to various research, plus the loss of income from diminished work hours, will also have an impact on the elections.

And yet President Cyril Ramaphosa, and his government a little less so, received significant approval for handling the Covid-19 pandemic — 60% of respondents agreed/strongly agreed the president did a good job, with 59% approval for government, while only 18% and 19% respectively strongly disagreed, according to research in June by the University of Johannesburg’s Centre for Social Development in Africa.

The research, “Factors determining voter choice between 2017 and 2020”, based on 3,469 interviews in November and December 2020, found highly rated voting considerations were socioeconomic factors — 40% of respondents agreed strongly or extremely that should another party come to power social grants would stop — and constitutional rights like voting and freedom of speech.

But this study, like the August Afrobarometer survey, reflects declining trust levels in institutions.

Polls are one gauge of support, but South Africa, unlike the US or Europe, has no significant tradition of election polling that would, for example, track the impact of the DA posters that looked to make election mileage from the July violence in Phoenix, KwaZulu-Natal. While political parties may do their own polling, those are not made public. Exit polling on the day is also not that prevalent.

In the 2016 local government elections, the ANC lost control of South Africa’s economic heartland of Johannesburg and the administrative capital, Tshwane, alongside the Eastern Cape economic centre of Nelson Mandela Bay Metro. Elsewhere, as in Ekurhuleni, the ANC also slipped under 50%, but retained control through a coalition as it did in Rustenburg, the heart of the Platinum Belt.

That 2016 municipal poll signalled voter loyalty was no longer inextricably enmeshed with the ANC’s liberation benefit.

Declining ANC fortunes in the 2016 poll have been widely attributed to the public outcry over the Nkandla debacle amid rising corruption and shrinking socioeconomic stability. Some traditional ANC voters cast their ballots for other parties. Voter turnout also had an impact — a drop-off of votes in ANC traditional strongholds like Gugulethu and Langa in Cape Town meant the party lost seats in the council that is governed by the DA with a two-thirds majority.

Crucially, the ANC’s national drop in support in 2016 did not lead to a corresponding increase in support for opposition parties like the DA, although it increased its support from 21.97% nationally in 2011 to 24.57% in 2016.

That signals that the largest opposition party’s offering to voters is not sufficiently translating into crosses on ballots.

Meanwhile, the majority of young people under the age of 30 have not put themselves forward as potential voters — raising serious questions not only about electoral democracy, but more broadly about South Africa’s constitutional democracy.

Just 177,416 of 18 to 19-year-olds are registered as voters, according to the IEC. It’s a dismal percentage, although comparisons to the percentage of the population are difficult because the Statistics SA July 2021 population estimate reflects the 15-19 age group.

However, in the 20-29 age group comparisons are possible, but not encouraging. The IEC has registered 4,423,298 young women and men in that age group — less than half of the total potential voters of 10,063,439 in this group, according to Statistics SA.

It’s a clear signal South Africa’s politics, political messaging and engagement need to change. And it’s something political parties on the election campaign trail for the next 23 days would do well to heed. DM