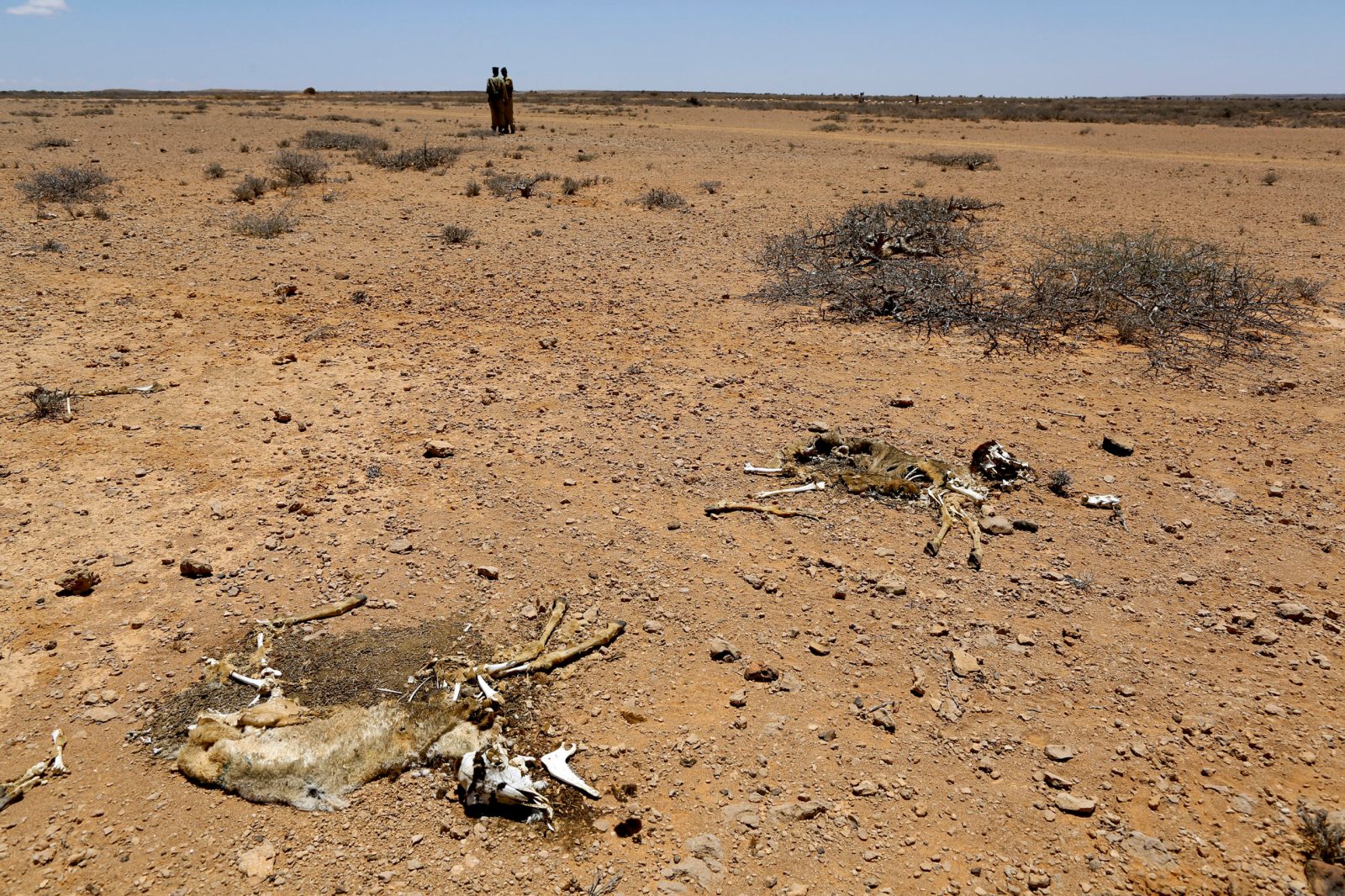 Carcasses of sheep that died in a severe drought near a pastoralist settlement in Bandarbeyla district in Somalia's semi-autonomous region of Puntland, on 24 March 2017. The world’s poorest countries will be hit hardest by climate hazards and climate change driven extreme weather events. (Photo: EPA / Dai Kurokawa)

As temperatures rise — with Africa experiencing that increment at twice the global average — the erosion of ecological systems is likely to provide a strain on resource supply, driving conflict. The spark of conflict as a result of a lack of resources is also said to be a continuing phenomenon, a recent report found, suggesting a brutal cyclic relationship.

Ecological hotspots are suffering degradation as a result of climate crisis effects, threatening millions of livelihoods and spurring regional conflict, a recent report has found.

A previous study by Annual Reviews has shown a link between a 0.5°C warming with a 10% to 20% increase in the risk of deadly conflict. With the African continent’s temperatures expected to increase at twice the global average, this could pose a further threat of conflict, and therefore environmental damage.

“Climatic conditions are neither necessary nor sufficient for conflicts to occur, but changes in climatic conditions could have a measurable impact on the probability and intensity of conflict,” the Annual Reviews study said, adding that an increase in climate threats in one region may not have the same effect in another.

Regions most at risk of societal collapse include the Sahel-Horn belt of Africa, the southern African belt, and the Middle East and Central Asian belt — all of which, the ETR says, are in urgent need of attention as far as food insecurity, lack of water, population growth and the impacts of natural disaster are concerned.

To tackle and promote ecological resilience, the IEP, alongside 60 policy stakeholders, came up with several solutions. The combination of health, food, water, refugee relief, finance, agricultural and business development into a single agency in the mentioned high-risk areas, is among those solutions.

The ETR found that dispatching an army to areas of conflict was necessary, but did not deal with the underlying problems of the conflict. An example of this is the case of Afghanistan where, the study pointed out, poorly planned and executed development spending made achieving peace impossible.

“The recent fall of Afghanistan to the Taliban highlights the limits of the military and exposes a poor spending strategy. It is estimated that the total US federal expenditure on Afghanistan cost $2.261-trillion — $50,000 for each Afghan citizen currently living in the country. This is more than 100 times the average Afghan’s yearly income,” the institute said.

According to the think tank, the integration of different development sectors recognises the systematic nature and solution to ecological degradation. This allows for efficient resource allocation and decision-making as far as need is concerned.

“The problems of conflict, food and water insecurity, displacement, business development, health, education and indeed climate change are interrelated, and the interconnectedness of these relationships must be recognised for them to best be addressed,” said Steve Killelea, founder and executive chairperson of the IEP.

An underlying factor of the study — malnutrition, which is also a driver of conflict — is expected to increase by 343 million people by 2050. The study found that since 2014, the number of people without access to adequate food has increased by 44%, with the rise associated with peace deterioration.

In Tigray, north of Ethiopia, feuding between the Tigray People’s Liberation Front (TPLF) and Ethiopia’s government has resulted in a political crisis, fuelling a famine crisis. The Integrated Food Security Phase Classification found roughly 400,000 people to be acutely food insecure in the region. A ceasefire was declared to allow farmers to farm since the population was in desperate need of emergency food aid, with millions facing famine.

Sub-Saharan Africa has the most countries with the lowest social resilience. The region’s expected high population growth along with 70% of its people already suffering from access to safely managed water, could result in further conflict, the IEP said.

However, Jordan and Lebanon are most at risk of extreme water stress. These countries join 5.4 billion people that are expected to be facing water insecurity by 2040, the study found.

Other key findings of the study include;

The report found that the world’s biggest emitters were countries where citizens were least concerned about the climate crisis, while being among the most populous. With only 23% of Chinese seeing the climate crisis as a threat, and only 35% of Indians perceiving it as such, the lack of citizen buy-in could limit effective climate action from big polluters, the ETR said. 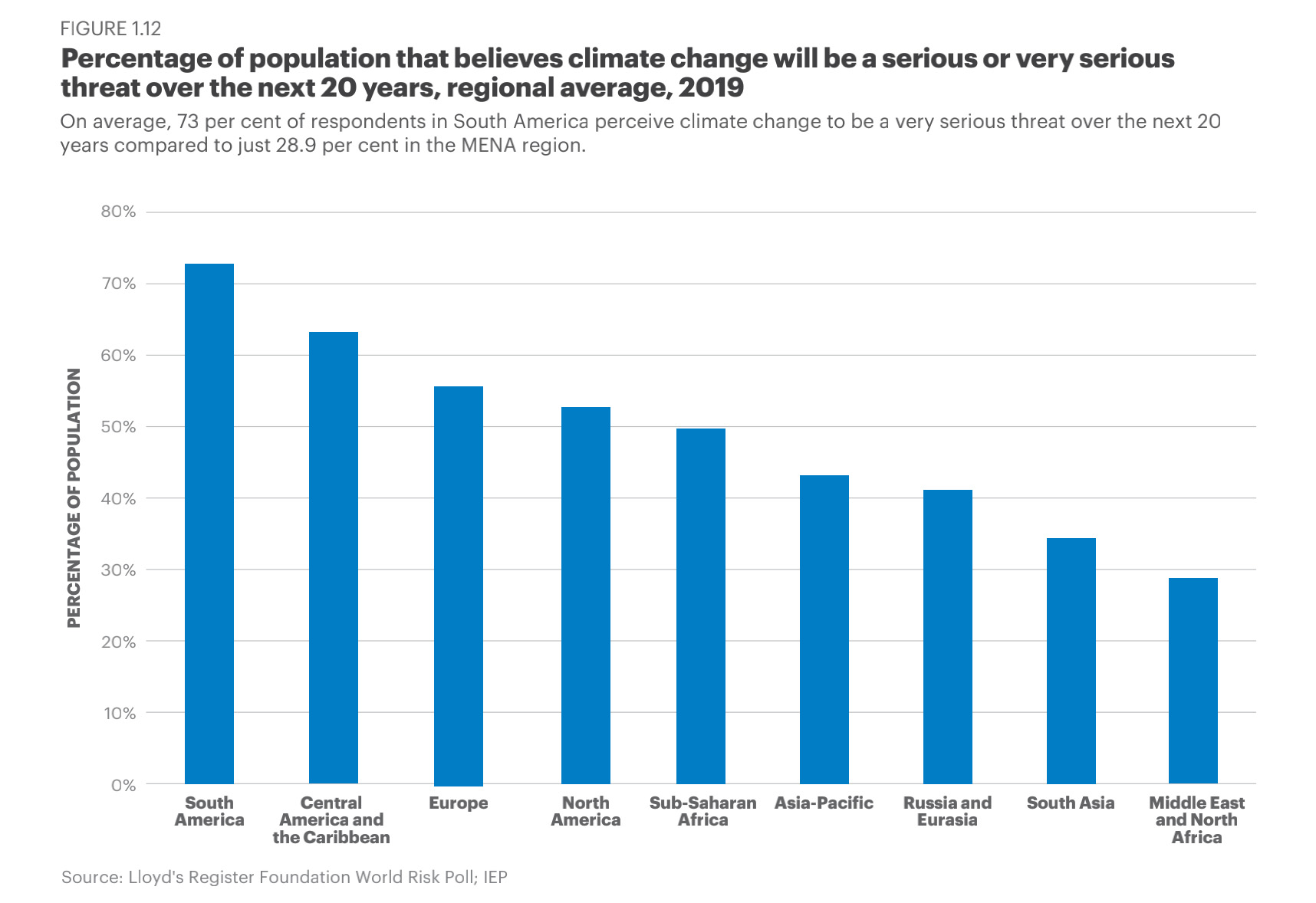 As COP26 draws nearer, where world leaders will discuss efforts to reduce carbon emissions, they also ought to consider resilience funding to ecological hotspots before conflict drivers further intensify. Much focus has been on climate financing for adaptation and mitigation. With conflict costing the global economy $600-billion in 2020 alone, serious concern and consideration for ecological resilience adaptation should be taken into account.

“COP26 provides an ideal opportunity for leaders to recognise that the ecological threats of today need to be addressed before climate change substantially accelerates them, costing trillions more to address,” Killelea said. DM/OBP