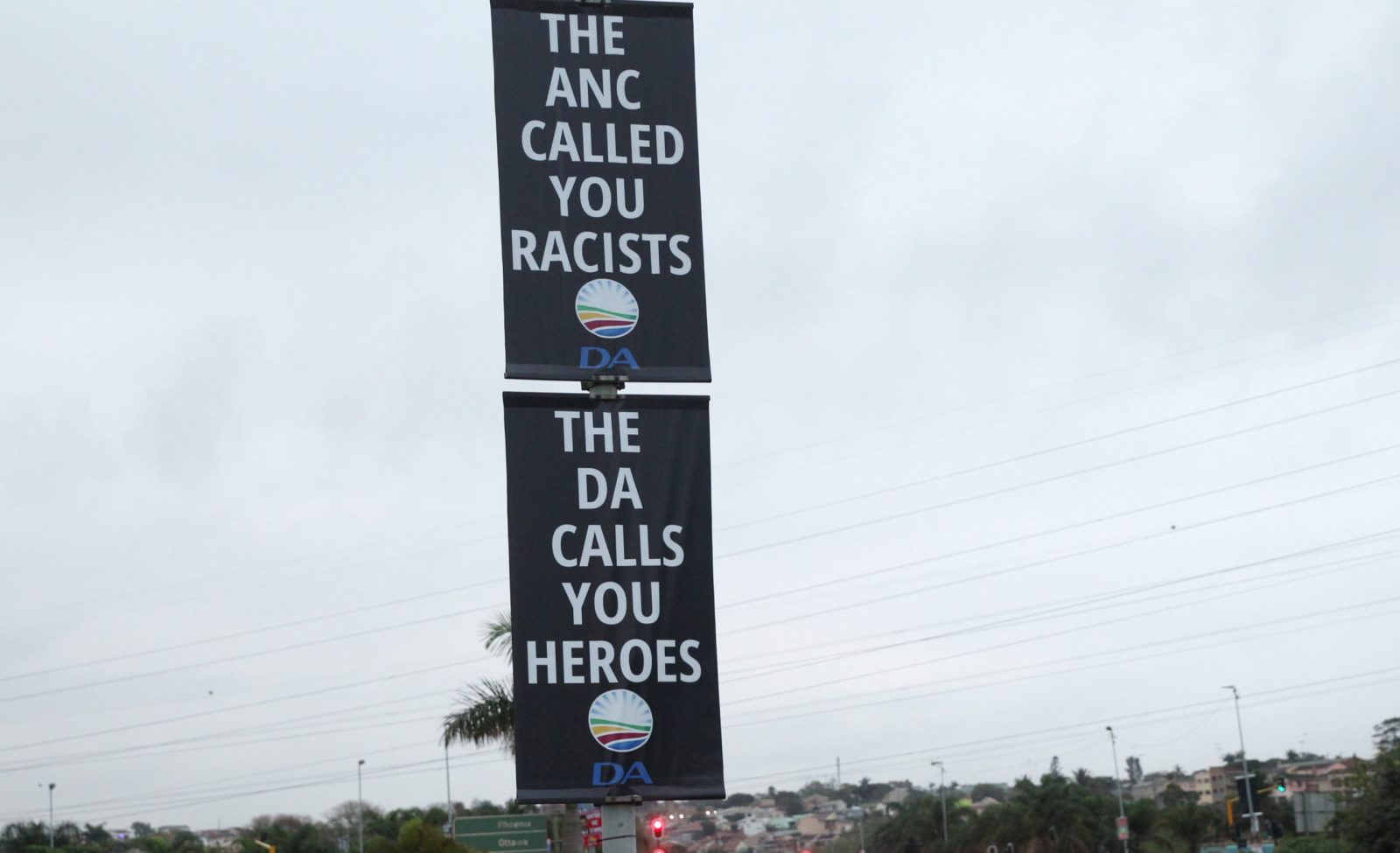 DA election posters erected on Phoenix Highway sparked outrage, in the wake of the deaths of 36 people during the July riots in the area. (Photo: Mandla Langa)

KwaZulu-Natal DA chairperson and campaign manager Dean Macpherson issued a statement on Thursday afternoon saying that the controversial ‘us versus them’ local government election posters that had been erected in the Phoenix area, and were also to be erected in other parts of eThekwini, were in the process of being removed.

“In my sincere effort to honour the bravery and heroism of law-abiding citizens who were left to fend for themselves during the July riots and insurrections, the posters have regretfully caused hurt to some people. I am deeply sorry and apologise for this,” said Macpherson.

The two-tier posters are branded with the DA logo, albeit on a darker blue background, and read: “THE ANC CALLED YOU RACISTS THE DA CALLS YOU HEROES.”

The reference is to the violent riots and looting that engulfed large parts of KwaZulu-Natal, and to a lesser extent Gauteng, in July and led to the deaths of 359 people nationwide – the vast majority of them in KwaZulu-Natal.

But of those deaths, 36 were in the Phoenix area, and it is this that sparked racially charged controversy.

The deaths of these mostly black residents – from neighbouring settlements – that led to nationwide outrage at the time of the riots, as it appeared they had been targeted by residents of the predominantly Indian township.  Forty-three people were arrested and several cases are before the courts.

(For a detailed account of what took place, please see : July Unrest: what really happened in Phoenix)

Macpherson had previously tried to defend the messaging of the posters when interviewed by Daily Maverick on Tuesday, saying:

“The second point is that we vehemently disagree with that. We don’t subscribe to that. We think that the ANC has used the race card to hide the terrible conflict and damage that has been inflicted on the city because the ANC decided to have a family argument on our streets, costing billions of rands and hundreds of lives.

“We think that anyone that actually stood up, was the blue line between total anarchy and chaos that we were subjected to, [and] are heroes.”

It is understood that the posters also caused divisions within the DA itself, with several councillors telling Daily Maverick that they found them “insensitive” and “crass”, but that Macpherson, and party leader John Steenhuisen, had “doubled down” on their necessity.

Indeed, Steenhuisen defended the wording on the posters this week when confronted by journalists.

Macpherson’s tune may have changed, no doubt under duress, but Steenhuisen was yet to issue a statement at the time of publication.

In his statement, Macpherson contends that the posters were “unsanctioned by the DA leader, party structures and party campaign leadership” and would therefore be removed.

“Sometimes in politics our words may be poorly chosen, but I wish to assure the public, without contradiction, that my intentions are always sincere.

“My intended message was that in the massive void created by a failing state, unable to secure South Africans’ homes and businesses during the riots, some heroic residents were forced to stand up and do what the police and army were unable to do. This action was met with allegations of racism from the ANC.

“The DA is a party of non-racialism and it was never my intention to cause any other perception.

“I remain steadfastly committed to all people in South Africa, united in our diversity, and our campaign will continue to show South Africa that only the DA can and will get things done.”

Macpherson had previously tried to water down the way the message was perceived – as one stoking racial tensions – by telling Daily Maverick that the ANC-led eThekwini administration had approved the posters.

“The only people who have been stoking up racial tensions have been the ANC and the EFF by calling all Indians racist bloodthirsty killers,” he said.

The ANC in KwaZulu-Natal had described the posters as “a disgusting act of the DA to pit people against each other”.

“It shows the true colour of the DA that is desperate to an extent of spreading lies to gain votes. Their actions reveal that they are a party that will do anything as they thrive through creating division and perpetuating racism.” DM