Those who have done wrong and those who have failed to hold them to account would prefer that we forget about their nefarious deeds and failed responsibilities, but Daily Maverick intends to remind us, lest we forget. This article is part of our new series titled Lest We Forget, in which we return to scandals and corruption, big and small, to reveal what has happened to investigations and promises of action. In this instalment, we note that when it comes to major corruption scandals, only one case has been prosecuted for jailing; orange overalls are far off for the rest.

An ongoing Daily Maverick analysis of corruption shows that President Cyril Ramaphosa has failed to disrupt it sufficiently to make a dent in its trajectory.

This year alone, there have been four significant scandals with well over R1-billion in misspending, by opportunists who used the Covid-19 pandemic to extract rents from the relaxation of procurement systems.

An Afrobarometer survey result released in September revealed that most people polled in a representative study believe corruption worsens under Ramaphosa. The Presidency has denied this, but the data shows the truth in the perception. 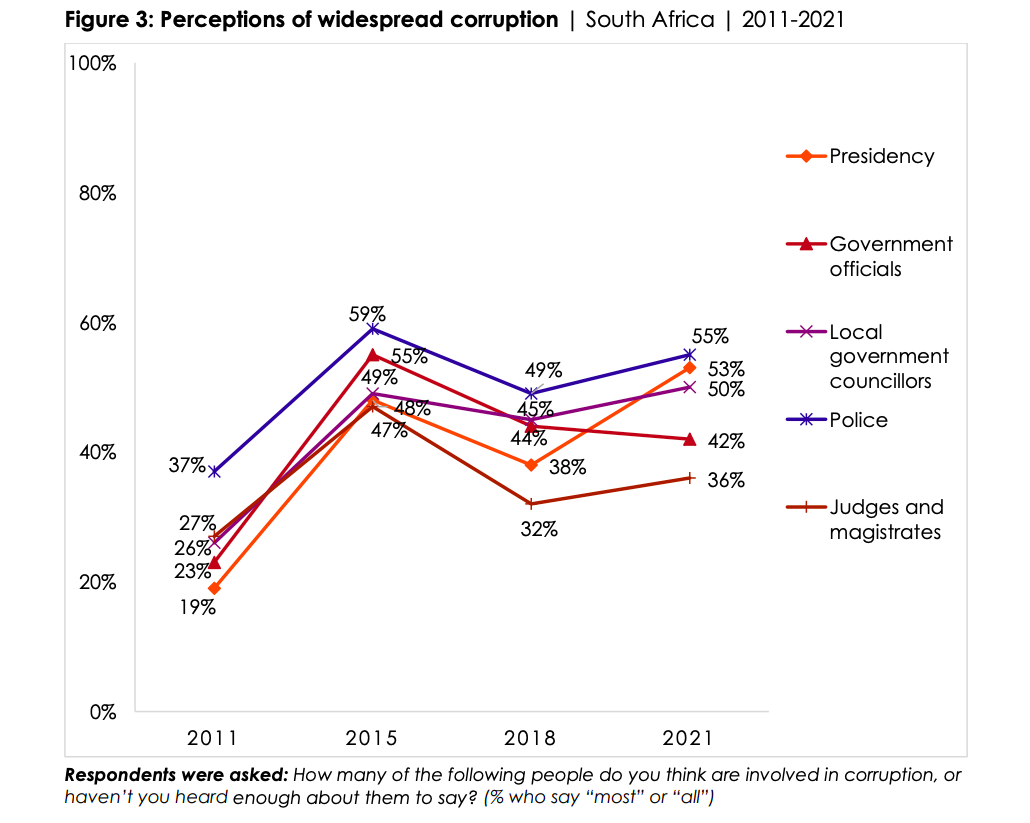 There have been 32 significant scandals in South Africa. This rap sheet is book-ended by public health communication scandals.  The first was the Sarafina debacle in 1996, where playwright Mbongeni Ngema was gifted with payola to produce a public health play. The latest is the 2021 Digital Vibes public health contract to cronies of former Health Minister Zweli Mkhize.

Only one big player was prosecuted. Former and late police commissioner Jackie Selebi was jailed for corruption with his corruptor Glenn Agliotti.  Still, the top cop was later released on medical parole.  The Constitutional Court also stopped a contract between Sassa and Net1 Cash Paymaster Services.

Since Ramaphosa became President, the pace of corruption has not slowed substantially. Four PPE schemes in which various patronage networks have overcharged state departments (national, provincial and metropolitan) for masks, PPE schemes, fogging and other schemes which continued until 2021, have been exposed.

The Karpowership emergency power contract could cost over R200-billion (and much more, given rising gas prices), is categorised as one to watch. It follows the same methods like bending the rules, evading regulation, and using political connections to drive it through.

Corruption is emerging as the top national issue, along with jobs, on the campaign trail ahead of local government elections on November 1. Municipal corruption is evident everywhere but our report focuses on corruption cases significant enough to be regarded as national. 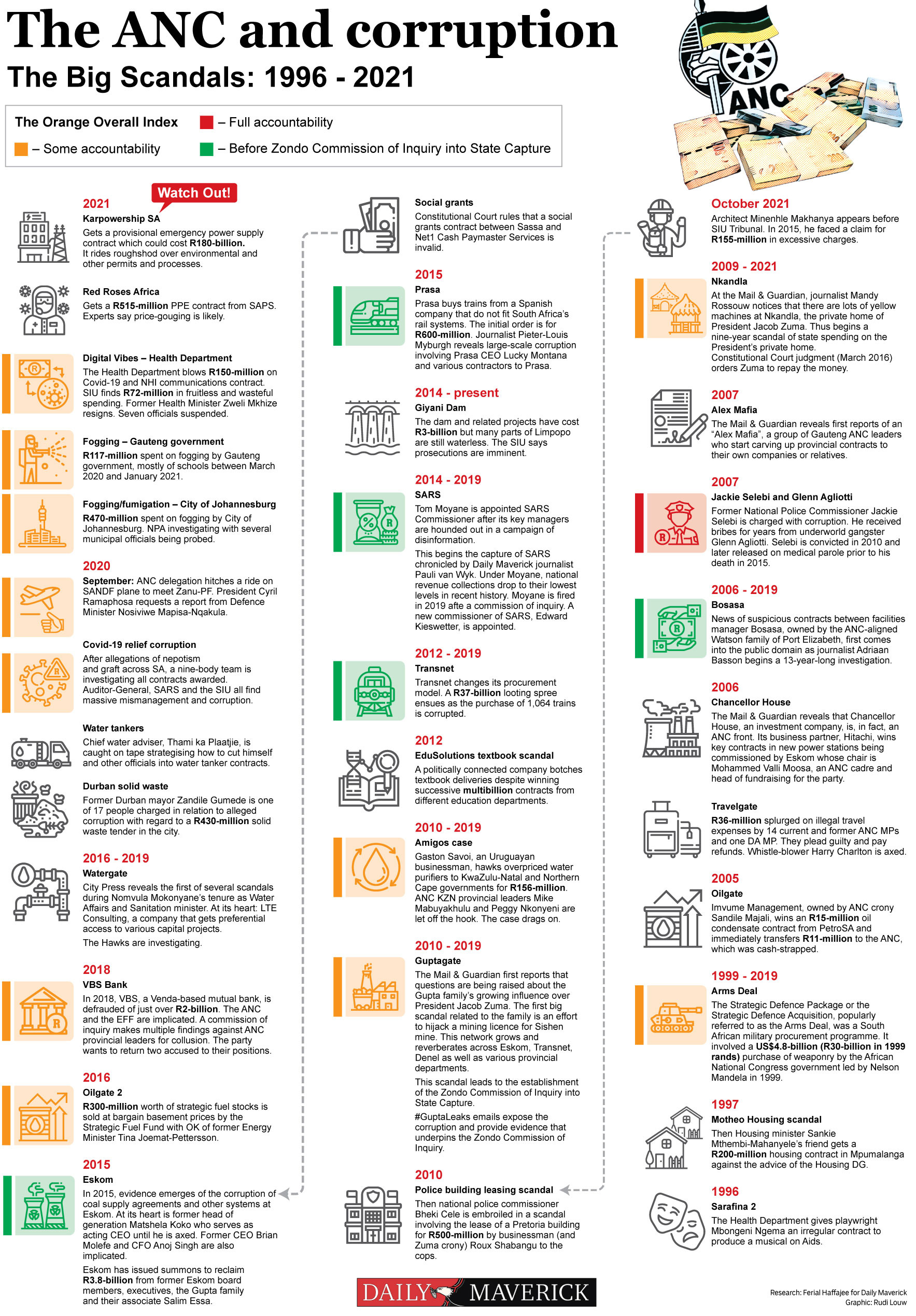 The trajectory of corruption has not slowed, but there are substantial differences under the present ANC administration. PPE corruption sparked fury because the scandal happened as millions of the poorest South Africans lost their livelihoods and tens of thousands lost their lives.

The Special Investigating Unit and its head Andy Mothibe have taken the baton and run. Each of the PPE cases is being investigated. In some, civil servants have had their pensions docked after resigning and pending further investigations. A so-called Fusion Centre is working around the clock to stop the PPE corruption and to lay charges. This action may not be enough for weary South Africans, but it is faster than in most other scandals.

Until now, the compromised criminal justice system put the brakes on justice, creating a climate of impunity. The spending on Nkandla happened in 2009, and architect Minenhle Makhanya appeared before the SIU Tribunal in 2021 — 12 years later. Former president Jacob Zuma is still dodging charges related to the arms deal, which date back to 1999, and his co-conspirator Schabir Shaik was jailed and then freed on medical parole. None of the arms deal companies have been successfully prosecuted. Zuma is out on medical parole after being jailed for contempt of court. It is unlikely he will ever be kitted up in an orange overall, given his political protection.

All the significant state capture cases have been ventilated before the Zondo Commission of inquiry: Bosasa, Transnet (the most expensive at over R40-billion), Eskom (the quantum is still being calculated), SA Revenue Service (Sars) and Prasa (initially R600-million, but likely much more). Eskom has issued a civil summons to reclaim R3.8-billion from the former board, but former chairperson Ben Ngubane has passed away. The evidence before the Commission is being processed by the Investigating Directorate. A key player, Iqbal Sharma, has been charged but for his role in a much smaller contract in the Free State. Further prosecutions are imminent but not of the Gupta family and their lieutenant Salim Essa, all of whom are said to be holed up in Dubai and are red-lit by Interpol should they try to move. The Emirate says that it is committed to a mutual legal assistance treaty — but there is no action to repatriate the Guptas.

The Zondo Commission report, due out at the end of December 2021, will make a series of recommendations that could be the foundation of more muscular action. Still, the changes will be future-facing rather than redemptive. While South African politicians tended not to go down for corruption, former Health Minister Mkhize resigned.

Several institutions captured by corruption are in new hands like Sars, the NPA (with a new dedicated anti-corruption unit, the Investigating Directorate) and the SIU.

That space has been closed with new managements and boards at Eskom, Transnet, Denel, SAA and the Airports Company SA.

The pandemic required rapid release of funds to buy PPE and ensure effective cleaning and sanitising at public buildings. The National Treasury dropped its standing procurement rules, and the patronage networks moved in quickly, revealing how the system works. The assassination of Gauteng health official Babita Deokaran sheds light on how these networks operate in tandem with state mafias that have not been sufficiently disrupted.

The Karpowership deal to provide natural gas through power ships in three South African harbours for 20 years has revealed a new front — energy.

Karpowership rode roughshod over environmental and other permits, and the company is extensively politically connected, as amaBhungane has shown. Tony Carnie revealed how the Karpowership deal got a midnight hospital pass at the end of September 2021 after it failed to close financial arrangements in time. This potential new scandal also shows how the patterns which saw South Africa almost commit to an R1-trillion nuclear deal in the dying days of Zuma’s administration are still etched deep in the political-economic landscape. These are: the use of an energy source that is unaffordable and non-optimal for South African conditions (then nuclear, now power ships) and the support of a powerful political sponsor (then Zuma, now Minerals and Energy Minister Gwede Mantashe). Other common factors are overriding regulators including a powerful multinational player with geopolitical backing in the state (then the Russian state-owned nuclear giant Rosatom, now the Turkish-owned Karadeniz). The Green Scorpions are investigating the Karpowerships deal.

Is there more corruption?

The data bears out the growth. But it is worth noting that civil society is more conscious about corruption. Raised consciousness is often loud and can make it seem things are getting worse rather than better.

There are now regular and real-time exposés of corruption, and watchdogs are more persistent in opposing patronage and state capture. The lag effect is gone.

Whistle-blowers are emboldened to speak out earlier. They are inspired by people like Cynthia Stimpel (SAA), Themba Maseko (government and government communications), Francis Callard (Transnet) and both Mosilo Mothepu and Bianca Goodson (at the advisory firm Trillian). Trillian extracted hundreds of millions of rands from Transnet and tried an assault on the National Treasury.

There is more activism, investigation against and prosecution of corruption than before in South Africa’s democratic history. Still, unless these processes are deepened and sped up, the hyena trajectory will continue. DM