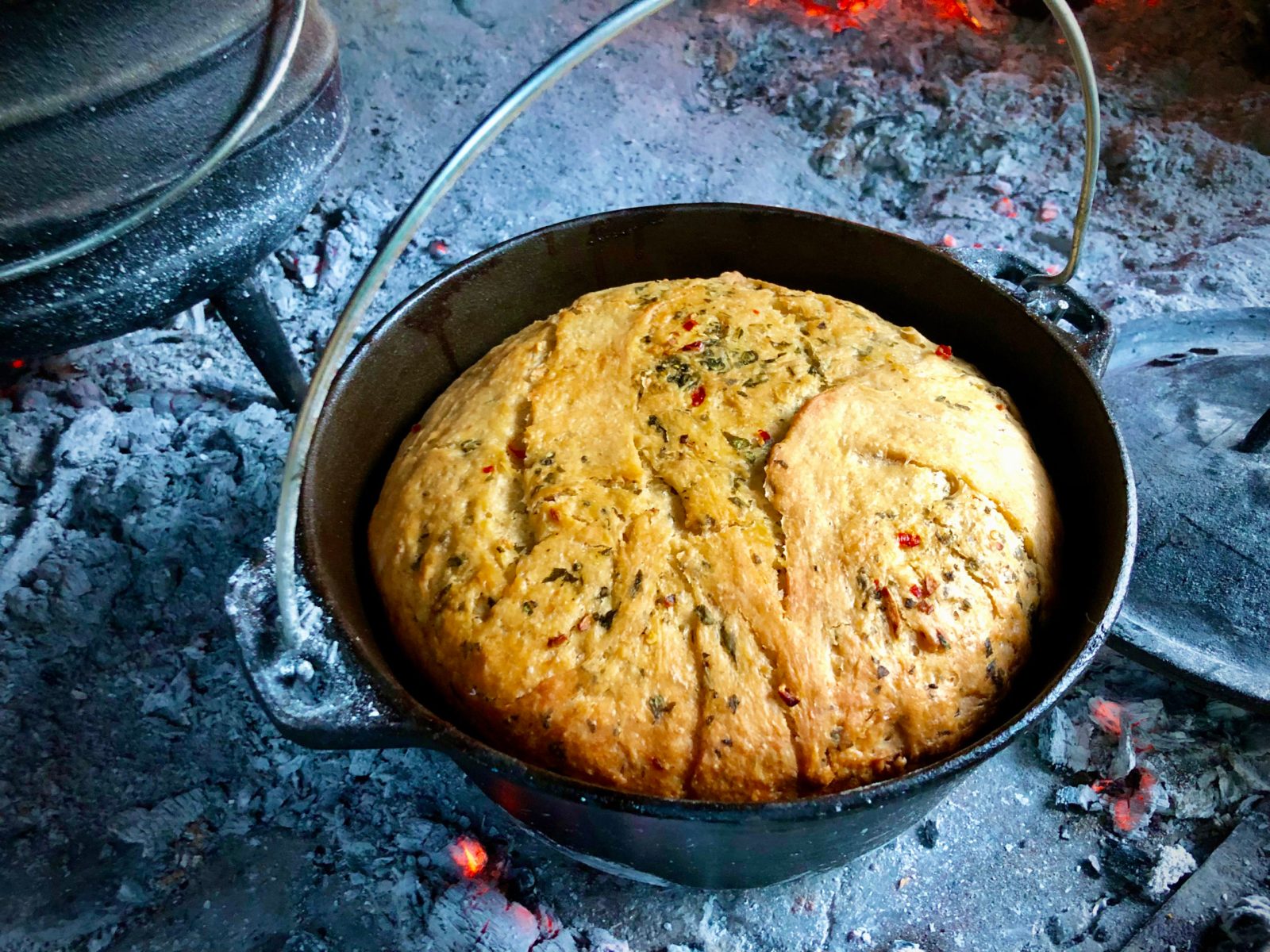 Bread made with chimichurri is popular in Argentina where the intensely flavoured sauce itself is served with braaied meat. I took the idea and turned it into a very South African potbrood.

You need to first make a batch of chimichurri, the green salsa whose chief ingredient is fresh parsley, and the herb is in its element right now, so it’s a good time to make it. My oregano bush is wild with growth, and that’s the second herb in chimichurri. Equally key to a good chimichurri are garlic and chillies, and of course olive oil and coarse salt and pepper, though I chose to leave out the red wine vinegar that is normally in it. This is because I was not using it as a sauce, but as the aromatic component of a loaf of bread, and I don’t think vinegar would have been a good idea for that.

3 Tbsp fresh oregano leaves, picked from their stems and finely chopped (or use 2 tsp dried oregano)

Combine all ingredients in a bowl or jug and stir. Do not blend.

1 cup chimichurri made without vinegar (see above)

Olive oil for brushing the dough before cooking

Sift the flour into a large mixing bowl. Add the yeast and sugar and stir very well with a wooden spoon. Only stir in the salt after this so that it does not neutralise the yeast.

Add lukewarm water a little at a time, while kneading the dough, until it is all combined.

Leave the ball of dough in the bowl, cover with a slightly damp tea towel, and put it in a warm place for 20 minutes. It was a hot day so I put it on a chair in the yard.

Make a fire so that you’ll have coals when needed.

Once the dough has had its first rise, knead the dough again for a minute or two, folding and turning. Flatten it out a little and spoon the chimichurri over it. Spread it around with the back of a spoon. Fold and knead again until combined, folding this way and that. You’ll see the colour of the green chimichurri spreading through the dough. Place back in the bowl, cover, and let it have a second rise for 40 minutes, again in a warm place and covered with a damp towel.

Grease a braai pot. Slide the dough in.

Check that you have braai coals. Brush the top of the dough with olive oil. Place hot coals all around the base of the pot, and a few more on top. Keep replenishing the coals at the base and on the lid for 60 to 70 minutes.

After 55 minutes, remove the lid. If half of the top is more golden brown than the other, turn the less done side towards the greater heat. After 5 to 15 minutes more, brush the coals away so it will cease cooking, or move the pot to a cool spot. Serve with a hearty meaty potjie, such as the beef short ribs one I will be posting next week, or try this lamb’s neck and shoulder potjie with lavender and orange, or this pork and beans potjie. DM/TGIFood