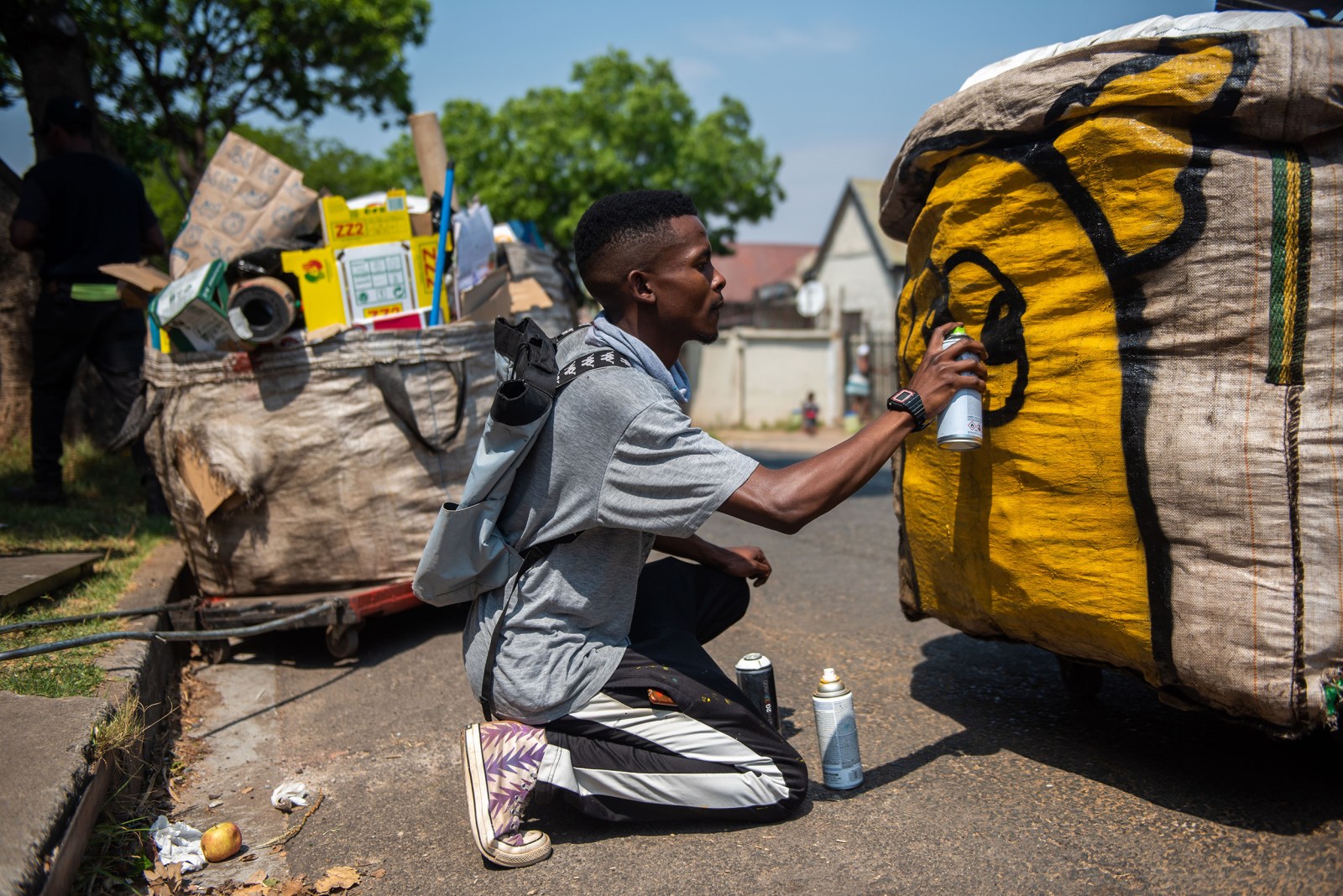 Local artist Tumi Thagoli (28) sprays the bag of a reclaimer during a breakfast with local reclaimers. They joined artists and other interested people for a breakfast at Shade on 29 September 2021 in Brixton, Johannesburg. (Photo: Gallo Images / Alet Pretorius)

Last week, independent waste reclaimers got the chance to interact with SA artists and provide material they need to create their artworks at the community arts centre Shade, in Brixton, Johannesburg. The meeting formed part of Shade’s ‘Waste Not Want Not’ project.

Reclaimers from the African Reclaimers Organisation (ARO) and independent waste reclaimers met with artists and community members for a breakfast at Shade on 29 September as part of the community arts centre’s Waste Not Want Not project, and to meet artist-in-residence Mpho Makutu. Makutu is a young, self-taught artist from Limpopo who creates robotics from waste material.

At the event, Makutu showcased the fully operational crane which he constructed from old drills and other waste, by picking up waste material and dropping it in the bag of one of the reclaimers. Makutu will spend the next month creating more robotics with the material sourced by reclaimers and bought by Shade.

Shade is a project space and community arts centre housed in a 100-year-old building, and founded by Tamzyn Botha (Limb). It is also the home of the waste material artist residency Waste Not Want Not.

At Shade, waste reclaimers get a chance to meet with artists and provide material they need to create their works. Waste materials — which largely consist of non-recyclables that reclaimers cannot sell — are installed in the materials library, which the artists have full access to in creating “waste works”.

Botha says: “The trash/treasures sourced by the waste reclaimers (bagarezi), highlight both the wasted opportunities of many materials that make it to landfills and that of the insidious (and most often overlooked) efforts made daily by the bagarezi, who are silently salvaging our society.

“Waste Not Want Not acts as a bridge, hoping to shine a light on the potential of materials and in fostering relationships between the bagarezi, artists, the youth and communities at large.”

The Waste Not Want Not project is supported by the Goethe-Institut and British Council.

While reclaimers enjoyed their breakfast and viewed Makutu’s crane, artists Percy Zimto, Tumi Thagoli, and Josh Wolmarans decorated the bags of the reclaimers with images or messages that will be seen around the city as the reclaimers travel to collect waste.

“I think being a part of something so positive, and seeing the work being done at Shade is greatly inspirational to me as an artist. It is enjoyable to see such positivity, energy, and love from the reclaimers. They find beauty in the small things. We often forget about the privileges and opportunities we have,” said Wolmarans.

Since the start of the project, more than 200 reclaimers have been to Shade ​​– either to sell their materials or to meet the artists and view the works made from waste.

Francois Knoetze, a performance artist and filmmaker, will join the project at the end of October to create a VR film using the waste material.

Botha said that The Waste Not Want Not project will culminate in an exhibition at Shade, and later the waste works will be fitted to a dump truck and taken to reclaimer communities around the city; a small homage to the very people that made it possible. DM