What is the macroeconomic price of going green?

The price of going green: Counting the macroeconomic costs of climate mitigation

As the consequences of recent energy shortages weigh on financial markets and the risks of transitioning to a green economy become clearer, experts are deliberating on how much the transition to a net zero global economy will cost in lost economic output, how to minimise this and, most importantly, who is best placed to fund it.

The events of the past few weeks have given us a sneak peek at what a possible future would look like as we transition from a fossil fuel-driven global economy to one that runs solely on renewable energy – and there’s ample cause for concern.

Not only is it going to be a delicate balancing act to reduce our dependence on fossil fuels and to get unhindered access to reliable climate-friendly energy sources, but the possible adverse impact on growth while we’re getting there could prove politically unpalatable as voters find themselves on the receiving end of electricity shortages and higher energy costs. Popular resistance would make the journey much harder and possibly longer.

The good news is that sustainability considerations are now at the top of the political agenda in the developed world and, increasingly, in emerging markets. But, as ING aptly says in its latest analysis of the world’s shift to green solutions: “Sustainability: here comes the hard part”.

There is much debate about whether shifting to renewable energy sources will impose a material economic cost or whether it will stimulate growth. Common consensus is that the economic cost of achieving net zero carbon transmissions would amount to some 3% of world GDP by 2050 – with the costs diminishing thereafter.

According to an Oxford Economics research briefing that explores the macroeconomics of climate change mitigation, research by Luderer and Vrontisi found that a net zero scenario could result in GDP losses of about 3.5% by 2050. This and other scenarios are mapped out in the graph below. 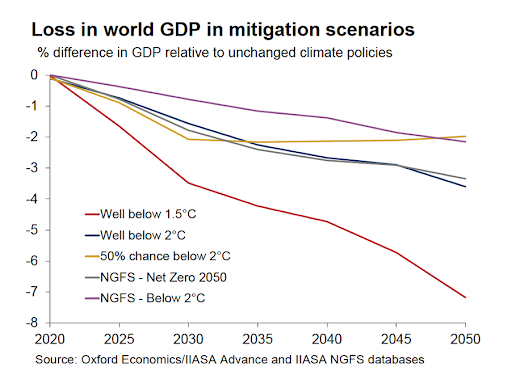 These estimates compare with the OECD’s Investing in Climate, Investing in Growth report findings that higher energy prices and tighter regulations that may well accompany the transition could subtract 2.6% from world GDP, but, they say: “This could be offset by a combination of deregulation and additional fiscal stimulus, resulting in a net boost to growth by 2050.”

However, Dr James Nixon, head of Climate Change Macroeconomics at Oxford Economics, puts the potential loss of GDP in perspective, saying: “If the GDP losses sounds modest, bear in mind that these are optimum, least cost scenarios where the cheapest emission reductions are undertaken regardless of where they fall.”

He points out that the net zero scenarios on which the estimates are based assume that energy supply is virtually carbon-free by 2050, with “very little role for any fossil fuels in energy supply in the second half of the century”.

Nixon estimates that an additional investment of $20-trillion will be needed over the next two decades to fund the transition. But where will that funding come from?

The International Monetary Fund (IMF) sees the $50-trillion global investment fund industry playing an important role in financing the transition “and helping to avoid some of the most perilous effects of climate change”.

Although demand has picked up for sustainability investment funds, the organisation says these only represent a small fraction of the investment fund universe, namely $3.6-trillion or 7% of the total in the case of sustainability-labelled funds. However, it is encouraging that assets under management in climate-themed funds grew by almost 50% last year.

The IMF spells out the necessary preconditions to get the industry onboard with the climate mitigation imperative: 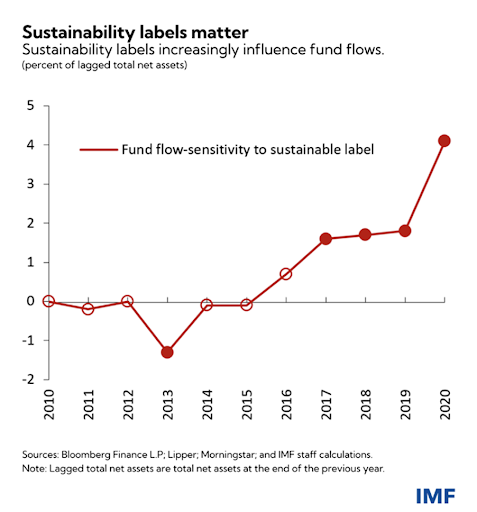 The first two recommendations are critical components of government efforts to harness private sector savings in funding the transition to a carbon-neutral future. This week asset managers’ sustainability credentials were again roundly criticised by a whistle-blower who had worked at the largest asset manager in the world, BlackRock. In a series of op-eds published on Medium titled “The Secret Diary of a ‘Sustainable Investor’ ”, Tariq Fancy describes industry sustainability efforts as a “dangerous mirage, an oasis in the middle of the desert that is burning valuable time” and advocates for political leaders to focus on fixing the rules of the game. Nixon agrees that broad-ranging regulatory and financial policies will be necessary to facilitate the green transition.

Time is fast running out for us to make the deep, structural changes needed, the likes of which have never been seen before. The challenges cannot be underestimated but, as Albert Einstein said, “In the midst of every crisis, lies great opportunity.”

As lights go out in China, UK citizens face a Zimbabwean situation in which they can’t get fuel and Europeans brace themselves for a chilly winter, companies, investors and individuals are getting a painful taste of what’s to come unless they do something constructive about it – and therein lies the opportunity. DM/BM

The price of going green: Counting the macroeconomic costs of climate mitigation