With our unemployment numbers being what they are, especially among the youth, it is worrying that older people think they will just carry on earning a living into their old age. Chris Eddy, Head of Investments at 10X Investments, has a look at SA’s retirement saving crisis in the context of the country’s changing population pyramid.

The 2021 edition of the 10X Retirement Reality Report points to a deteriorating pension outlook for South Africans. In the wake of the pandemic, even fewer now look forward to a comfortable retirement. This is evident across all age groups, demographics and income levels.

The 10X report is based on the annual Brand Atlas Survey, which tracks the lifestyles of the 15 million economically active South Africans in households earning more than R8,000 per month. Alarmingly, this modest cut-off already excludes two-thirds of households in the country.

Within the ‘fortunate’ minority, half the respondents still don’t save because they have nothing left at the end of the month. And even among those who are saving, just 7% anticipate a comfortable retirement; 79% fear they won’t have enough or feel unsure.

It is surely no coincidence that 71% of the respondents in this half also don’t have a formal retirement plan, or just a vague idea of one. Instead, they choose to cross that bridge if and when they come to it. Two-thirds want to retire beyond age 64, or not at all, and 74% are banking on earning additional income after they retire.

That seems like wishful thinking in the context of our low growth economy, which has the highest unemployment rate in the world, according to a report by Bloomberg in August 2021, and is still shedding jobs. The make-up of our population pyramid also does not bode well for those hoping to delay retirement; if anything, it promises the opposite outcome. The fast-growing number of people in the second half of their work life speaks to our growing pension crisis.

According to Stats SA’s Quarterly Labour Force Survey, our unemployment rate was 44,4% in Q2 2021, up from 43,2% in Q1. This number is based on the expanded definition of unemployed people, which includes discouraged work-seekers.

The problem is more heavily skewed towards younger people, however, according to an economic update by the World Bank (July 2021). The update found that, including discouraged job seekers, unemployment rates are as high as 74% for 15 to 24-year-olds and 51% for 25 to 34-year-olds.

There is no prospect that this will resolve itself naturally. The ratio of people pushing into the workforce (15-25) versus those eying retirement (55-64) dropped to 2,4 in 2020, but is still high compared with developed nations, which typically have a ratio of around 1, or even slightly less.

Millions more people want to get into the job market than are due to exit, underlining how difficult it will be for older people to keep their jobs, let alone extend their work life, unless we grow the economy.

For those who don’t plan to retire, some may find their employer has other plans. No one is, by force of will, immune to ageing, incapacity or redundancy. And, as Covid-19 has shown us so convincingly, an external shock can quite suddenly shut down otherwise productive and sustainable businesses, entire sectors even.

The survey trend over the last four years suggests that roughly one-third of retirees were pushed out of their job sooner than expected. That’s a double bogey in any retirement plan, as more draw-down years must be funded by fewer years of contributions and compound returns. 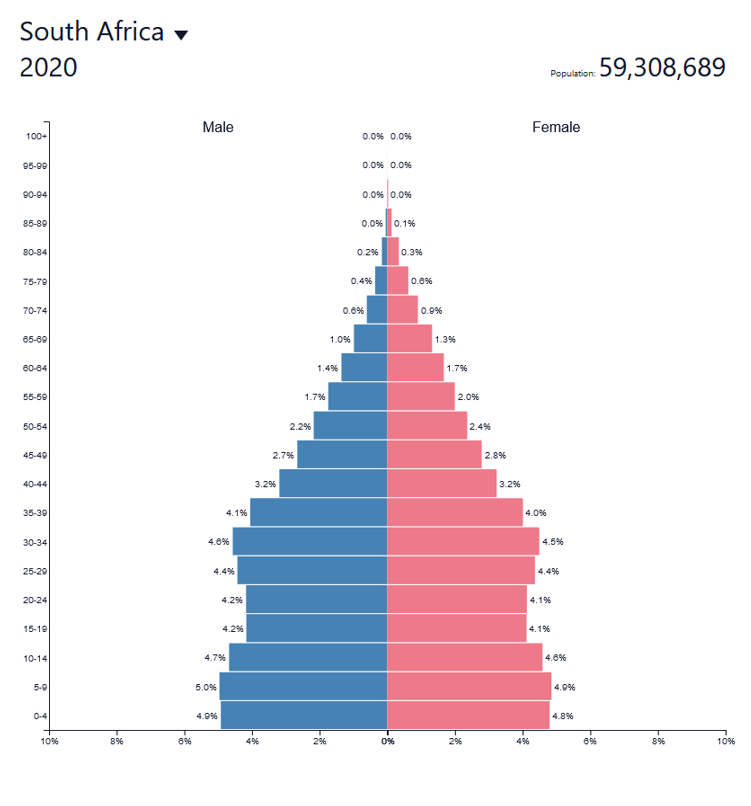 Although we fight our financial battles individually, this threatens to become a societal problem.

Thirty years ago, only 1,4m South Africans were over the age of 65, representing just 3,9% of the population.

Those with pension provisions mostly still received a guaranteed monthly income from their former employer’s fund. The shift towards ‘defined contribution’ pension plans was still in the early phase. Today, the majority must survive off their own savings efforts, based on how much they put away, and what returns they earned.

A fatalistic interpretation of these numbers suggests that the odds of making it to age 65 are quite low and not saving for retirement is a risk worth taking. But 64,8 is the average life expectancy, which means roughly half of us should expect to live longer.

Also, life expectancy at birth is depressed by our high child mortality rate of almost 3%. People who make it to working age can expect to live into their seventies at least and need to provide for non-working years.

The findings of this and other surveys suggest that a larger number of people are approaching retirement than ever before, and that most of them are without adequate savings. This is the looming retirement crisis that threatens to encumber our state’s finances and social welfare more than ever.

Those coming behind still have time to avert or mitigate their personal pension crises and unburden society. But unless they actively plan for their retirement, they are destined to follow in their parents’ footsteps. DM/BM

The content herein is provided as general information. It is not intended as nor does it constitute financial, tax, legal, investment, or other advice.