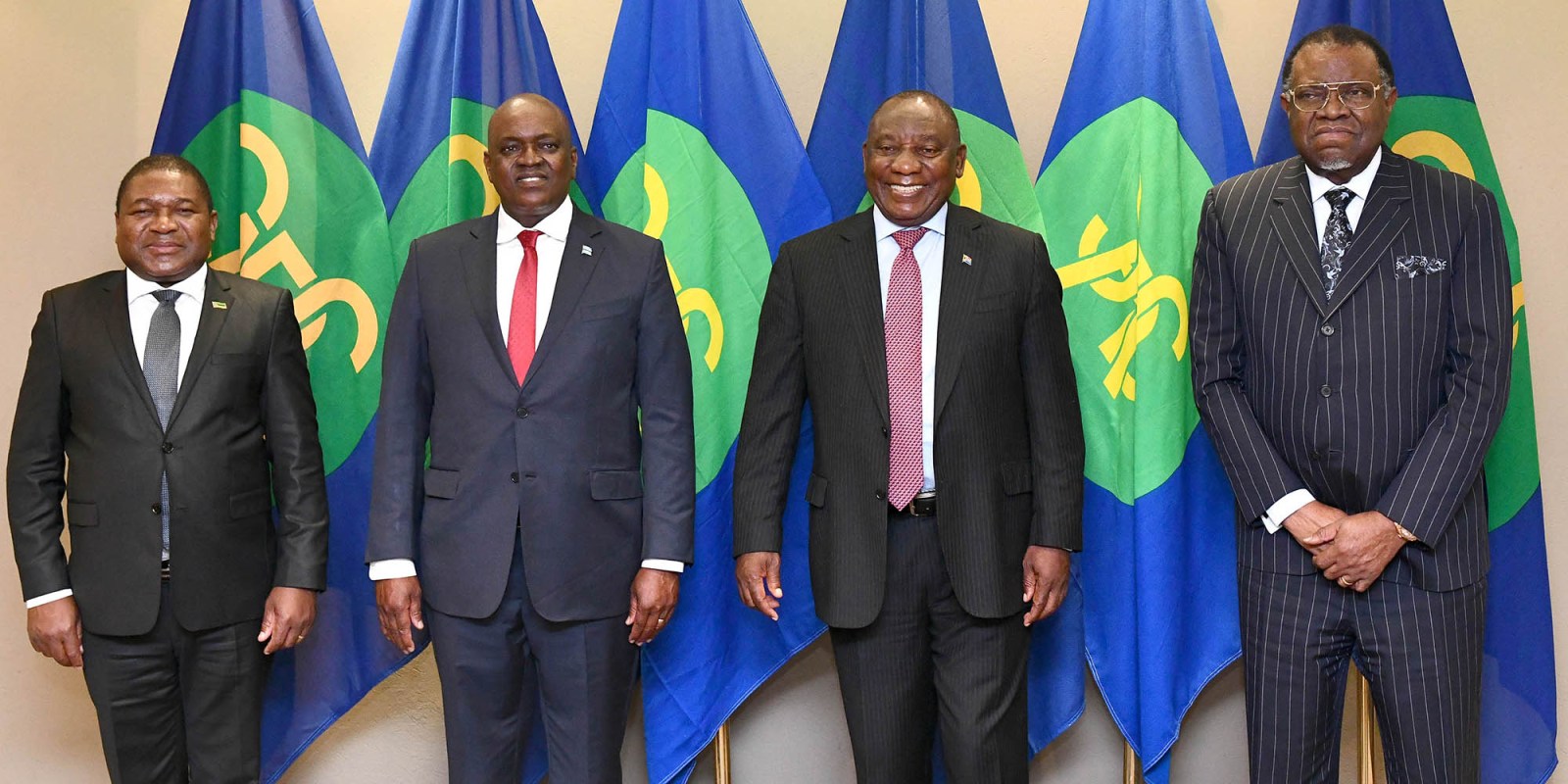 President Cyril Ramaphosa, in his capacity as chair of the SADC Organ on Politics, Defence and Security Cooperation, receiving SADC heads of state, including President of Botswana Mokgweetsi Masisi, President of Namibia Hage Geingob and President of Mozambique Filipe Nyusi in Pretoria, South Africa, on 5 October 2021. (Photo: GCIS)

Regional leaders have extended the Southern African Development Community (SADC) military mission which intervened in Mozambique in July to combat an Islamist insurgency in the country’s northernmost Cabo Delgado province.

The SADC Mission in Mozambique (Samim) was due to end on October 15, but presidents Cyril Ramaphosa of South Africa, Filipe Nyusi of Mozambique, Mokgweetsi Masisi of Botswana and Hage Geingob of Namibia met in Pretoria on Tuesday to assess its progress so far. They said its achievements had been “remarkable” and decided to extend its deployment beyond the initial three months, without putting a new time limit on the mission.

Ramaphosa told the summit that despite the progress which Samim had made in restoring peace and stability to Cabo Delgado, its work was not complete, “and the coming few months will be critical in shaping the trajectory of the SADC intervention in Mozambique”.

Ramaphosa chairs SADC’s security organ troika and Masisi and Geingob are its other current members. Nyusi attended the summit because the mission in his country was its sole topic.

The communique from the summit said nothing about financing nor expanding the size of the mission. It was originally decided in June that it should comprise up to 2,916 soldiers and this is confirmed in the Status of Forces agreement signed between Mozambique and SADC.

But military experts say so far the total number of SA National Defence Force soldiers in Mozambique only totals about 300 and the full Samim force only seems to have reached about battalion strength (roughly 1,000), not the brigade strength originally envisaged. They say the SANDF has not yet deployed regular infantry or artillery, frigates or a submarine, that are in the original plan.

They add that the SANDF is holding a battalion in reserve in South Africa for possible deployment. Apart from South Africa, Samim includes personnel from Tanzania, Botswana, Lesotho and Angola. However, in his address to the summit, SADC Executive Secretary Elias Magosi said Samim had been deployed on 9 July 2021 “and attained full operational capability on 30 August 2021”.

It is possible that the unexpected deployment of about 1,000 Rwandan troops just before Samim entered Cabo Delgado has precluded the need for the full SANDF force. The Rwandans have been doing most of the fighting so far, including the recapture in August of the port town of Mocimboa da Praia, which the insurgents had held for almost one year.

A few days later Samim announced that one of the insurgents killed was Rajab Awadhi Ndanjile (also known as Dr Njile or Dr Njile North), the insurgent leader in Nangade. Samim also raised the insurgent death toll to 18, apart from Njile.

Magosi told the summit that two Tanzanians and one Botswana soldier had died in the Samim mission. It was announced that a Botswana soldier had been killed in a vehicle accident in the provincial capital of Pemba in August. The circumstances of the death of the second Tanzanian were not explained, but perhaps one of the two Tanzanian soldiers injured in the Nangade attack later succumbed to his injuries.

Samim also announced that it had clashed with insurgents in the area south of Messalo River on September 26, killing one insurgent, capturing one suspected insurgent and seizing three rifles.

The financial implications for South Africa of the indefinite extension of Samim are not clear. Ramaphosa told Parliament in July that he was “employing” up to 1,495 soldiers for a three-month deployment in Mozambique at a cost of R984-million.

It is possible that the apparent deployment so far, of fewer SANDF soldiers, means that that budget has not yet been fully spent.

The summit communique said the leaders had “approved the extension of the Samim to continue with offensive operations against terrorists and violent extremists to consolidate stability of security and create a conducive environment for resettlement of the population and facilitate humanitarian assistance operations and sustainable development.

“Summit urged Member States, in collaboration with humanitarian agencies, to continue providing humanitarian relief to the population affected by the terrorist attacks, including the internally displaced persons.

“Summit expressed unwavering commitment to continue supporting the Republic of Mozambique in achieving peace and security in some districts of central and northern Cabo Delgado province.” DM

The number of SANDF soldiers in Mozambique, according to military experts, was altered for accuracy after publication.