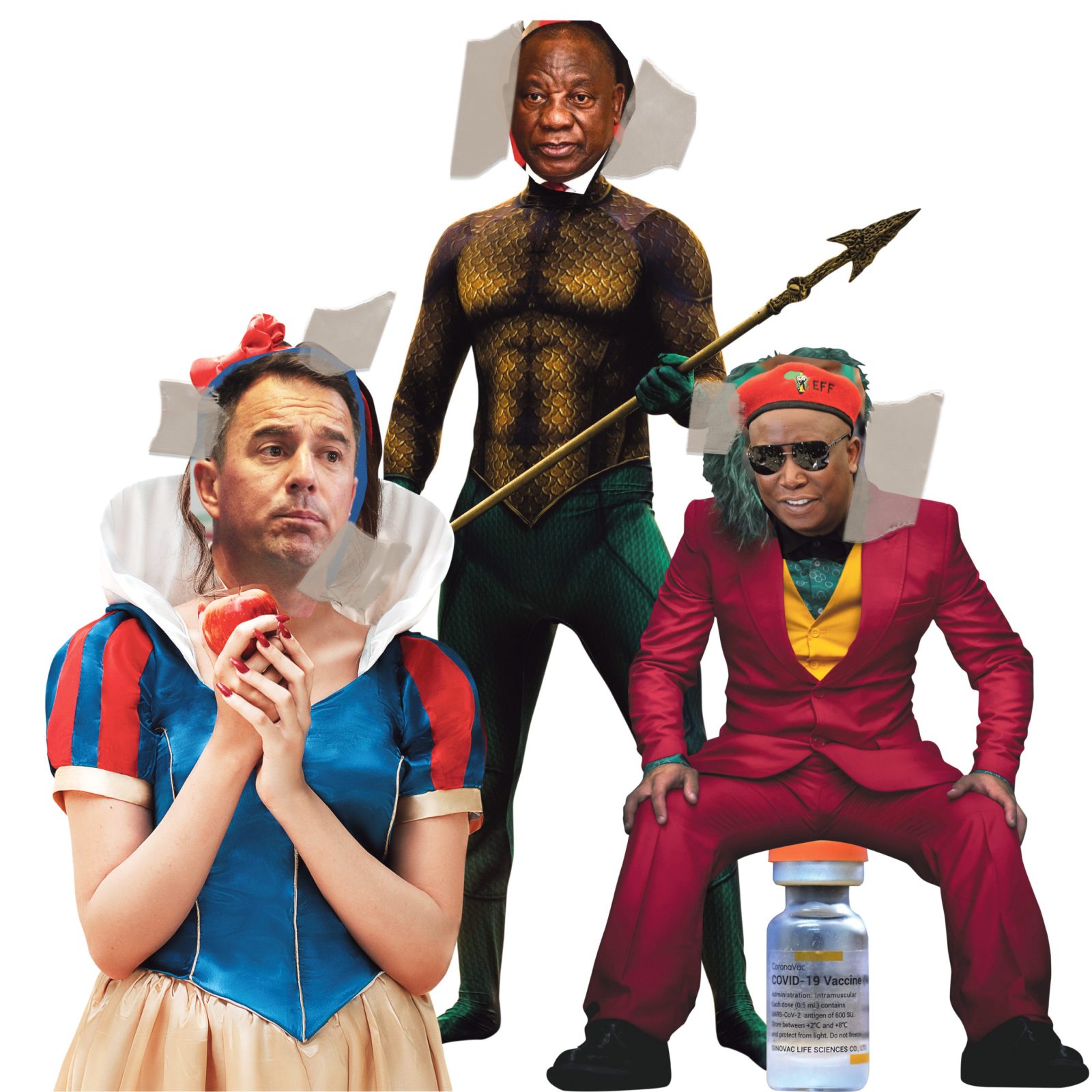 Roleplaying defenders of the realm and the great pretenders to the throne make for lots of fun for everyone - and it may be an innovative way of raising a bit of money for the cash-strapped ANC. Or what about Ace of Magashule?

Angelo Agrizzi, famous for being a kingpin of Bosasa, responsible for widespread corruption in government departments and Nomvula Mokonyane’s chicken deliveries, has a new book out. It’s the sequel to his earlier confession/self-justification, Inside the Belly of the Beast (and this man knows bellies), and it’s called Surviving the Beast.

You wouldn’t have thought there was a whole book in it – in what happened after he was arrested, that is. He claims there was an attempt on his life while he was in jail.

That is not, however, the most interesting thing about the book. No. In fact, the most interesting thing about the book is not actually in the book. It’s part of the publicity material that comes with the book, alongside a bunch of sweets (to enlarge the belly of the beast?) and a special card, printed on metal, punting Angelo Agrizzi Inc – “Integrity. Innovation. Insight.”

There’s another metal card, too, in a red sheath. It has only the words “To survive, you must face your beast” on it, and the sole use for it that I can think of would be to chop cocaine.

What comes with all that, er, stuff (sorry, technical publicity term) is an innovation in South African PR: the State Capture Game. It would appear Agrizzi designed this himself, based on a bespoke chess set he has, in which the pieces are mini-sculptures of key figures such as Gavin Watson, the Bosasa chief who terminated his contract with life by means of a concrete pillar in 2019. I am not making this up.

It’s not clear how the game works, or who’s on which side – or, in fact, which side Agrizzi is on. But it did set our minds working on whether, perhaps, games based on things like State Capture might not be an innovative way of raising money for troubled organisations such as the ANC, or perhaps individuals in financial difficulties or those who just want some good publicity by offering the public a bit of innocent fun.

Cyril Ramaphosa could, for instance, generate some goodwill (he doesn’t need the money) with the New Dawn Game, in which you play on a board similar to that of Snakes and Ladders. The ladders go up, and are labelled things like “Ramaphoria”, whereas the snakes go down – a good example would be “Failing to arrest any of the key instigators of the mass looting spree in July”.

And so you go up and down, not to mention round and round, playing against opponents such as the pro-corruption majority in your own party, and DD Mabuza, who has a special “snake token” that can turn a ladder into a snake, and whoosh – down you go.

The ANC itself could market a role-playing game, and a very challenging one at that, in which you have to dress up in green, black and gold and act the part of a liberation movement unable to make the transition to functional political party. You have to stage a local-government election campaign (cost: R50-million, at least) when you don’t have enough money to pay your head-office staff for months at a time.

Trying to prevent you from reaching your goals – such as winning a few more collapsing municipalities so you can collapse them further – are the DA (swathed in blue and chattering about how black people really should be more like white people), the EFF (adorned in red and threatening to pump you full of Russian vaccines), and the ATM (“We have more money than you do”).

Jacob Zuma, former president and formerly a loyal and disciplined member of the ANC, would surely get a great deal of mileage out of a computer game titled How to Stay Out of Jail – and How to Get Out Once You’re In.

This game is played on your own – it’s you against the system. You have to make your way through a complicated landscape, accumulating points for various things – for whipping up ethnic rivalry, pretending to foster transformation, getting the MK veterans to role-play as actual soldiers, and so on.

When you have enough points, and you’ve learned a sophisticated manoeuvre called the Stalingrad Defence, you can earn a Get Out of Jail card. Add to that the endorsement of a few military doctors who have never treated anyone for anything except shooting themselves in the foot, and you go to the next level.

That level is a bit more difficult, because despite tokens you may have earned, such as Advocate and Patron Saint of Lost Causes Dali Mpofu, and despite tokens you may sacrifice, such as Carl “Good Dog” Niehaus and all the advocates who aren’t Dali Mpofu, a sudden sideswipe could land you in jail anyway. That’s when you have to play the Mystery Illness card, but we can’t say more about that here, because it’s next-level.

For those who would prefer something more relaxing, there is Pick the Mayor of Cape Town. This is a very easy game, in which you simply have to choose between three action figures – Thin, Medium and Fat – and say who will win the race. Then you wait until the race is run and see who wins. If you got it right, you can boast to your friends on Facebook.

We must note that this is not a literal race, so don’t discount the Fat figure just because he looks too young to be mayor of anywhere and sports the kind of stubble that is no longer fashionable outside the beachside bars of Camps Bay.

There is also the very playable Ace of Magashule Game. It’s the kind of game people in old-age homes like to play by candlelight, especially in the Free State. You play it by yourself, so it’s a kind of solitaire. This game could be especially popular in the circumstances of another hard lockdown.

Basically, you get a bunch of cards (“corruption of branches”, say, or “asbestos contract”) and you throw them down, one by one, until they are all gone. Then you take your last joker to the highest court in the land and it wipes you off the roll. That’s it. Simple. You can drag it out as long as you like by playing the cards slowly – but the outcome is inevitable.

There’s also the Gwede Mantashe Huff and Puff Game, which is perhaps best for younger players who haven’t yet developed meaningful hand-eye coordination, or, for that matter, sufficient memory to understand any game with rules.

You put on a cross face and stomp around going “No! No! Never!” whenever someone suggests a good idea to get South Africa out of its energy crisis. There are no winners in this game, only losers – but anyone can play. Good luck. DM168