Springboks hope memorable victory over All Blacks will... 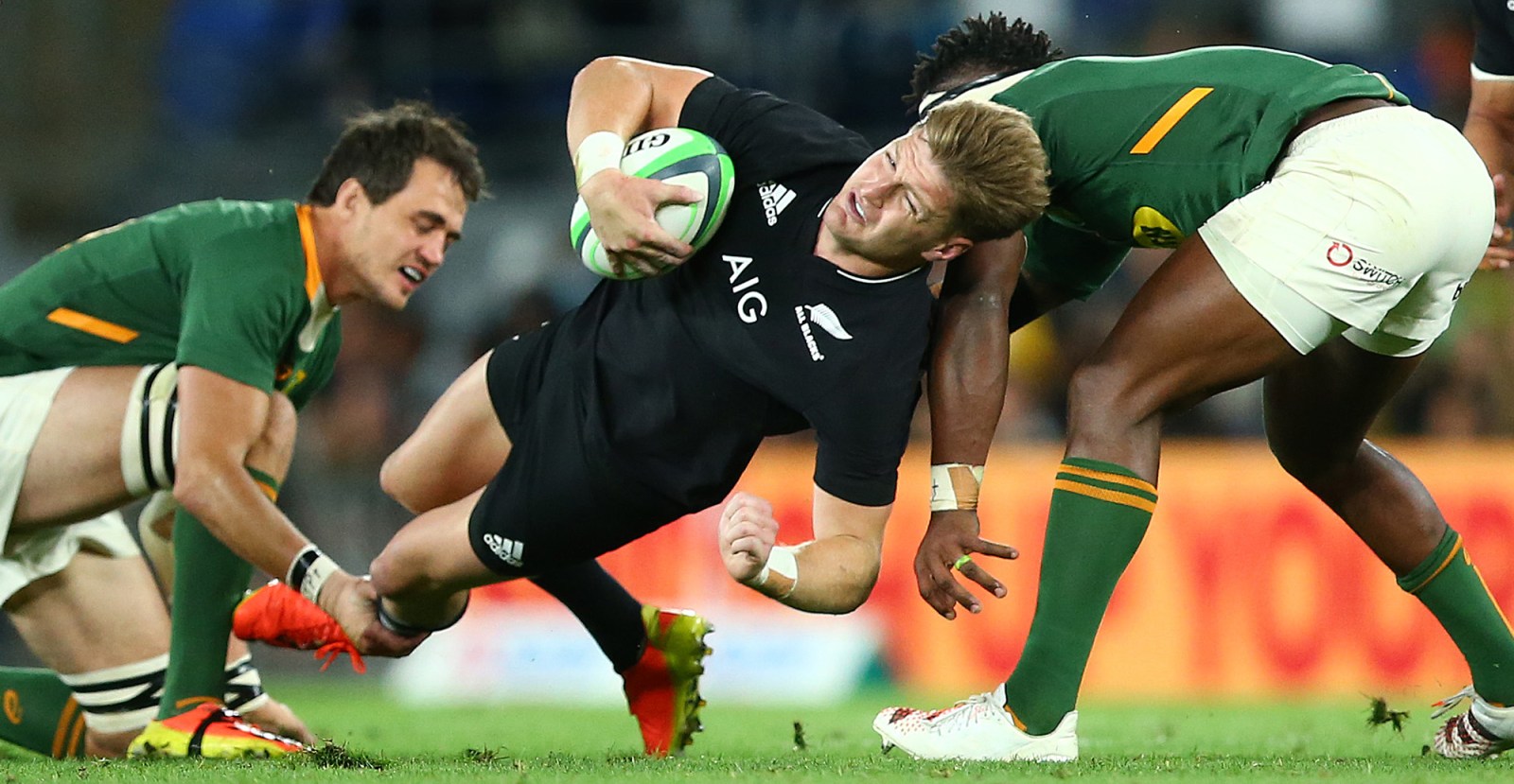 Jordie Barrett of the All Blacks is tackled during The Rugby Championship match between the South Africa Springboks and New Zealand All Blacks at Cbus Super Stadium on October 02, 2021 in Gold Coast, Australia. (Photo: Jono Searle/Getty Images)

The Springboks finished a disappointing third in the Rugby Championship, but their last-gasp victory over New Zealand ensured they maintained their ranking as the top side in the world.

He has often been accused of not possessing a big-match temperament and has struggled to cement his place in the starting 15, despite making his debut all the way back in 2012. However, Springboks flyhalf Elton Jantjies made all the difference as South Africa pipped their bitter rivals New Zealand to end an otherwise disappointing Rugby Championship campaign on a high.

The Boks came back from a nine-point deficit in a see-sawing match to justify their belief that they were doing many things right and that the margins in the defeats to Australia and New Zealand earlier in the competition reflected that.

First, he laid on an assist for Makazole Mapimpi to score his first ever try against the All Blacks. They were the only opponents that the Eastern Cape winger had previously played and not scored against.

Jantjies then followed up that contribution with a moment of brilliance as he struck a drop goal to edge the South Africans in front once more. However, Jordie Barrett restored New Zealand’s slim advantage with mere minutes remaining, before the Boks were awarded a penalty in front of the posts at the death.

With his teammates already celebrating before the deciding kick was taken, Jantjies stepped up to calmly slot the kick away and hand the Springboks just reward for a monumental shift on the day, after three straight losses in their previous games.

“It was straightforward. I live for the pressure, these are things that you do every single day so it was just going through your routine and making sure you keep your head down and kick it over,” said Jantjies after the game.

Jantjies made the difference after being brought on from the bench by the Bok management, along with the likes of Frans Steyn, Malcolm Marx, Steven Kitshoff, Franco Mostert and Elton Jantjies.

“It was an 80-minute performance, from the guys starting and then everyone on the bench as well played a massive role,” said the flyhalf.

“Hats off to them and to the coaches for making those changes, for believing in the guys on the bench, trusting them to do the job. The drop goal was just something I always trained because you never know when you get a moment like that so tonight it happened and it was time to use it.”

Lukhanyo Am had offered some foreshadowing of the brilliance that was still to come from the South Africans. The centre produced a sumptuous behind-the-back pass, with winger Sbu Nkosi alive to his teammate’s quick wits and drawing his man only to offload Damian de Allende to dot down with just five minutes on the clock.

Springbok head coach Jacques Nienaber says the victory will provide some valuable momentum for South Africa during the forthcoming November Tests and beyond. South Africa are set to tour the United Kingdom where they will play Wales (6 November), Scotland (13 November) and England (20 November) to end the international season.

“When the top three sides in the world play each other, you expect close margins,” said Nienaber. “We were 20 seconds away from winning in that first game against Australia and two minutes away from victory against New Zealand last weekend.”

“This time around, we got the crucial points in the last play of the match, that is how tight it was. There was a lot of noise from the outside and some justified critical comments amongst that. But the players never stopped working hard, going through the processes, doing the reviews, making new plans. So, I am pretty pleased for them.”

The players will also be glad to be reunited with their families, having been confined to a biosecure “bubble” since they commenced preparations for the British and Lions tour of South Africa back in June 2021.

Following their double losses to Australia, and the single loss to New Zealand, SA Rugby came out to defend the Boks, with the union’s president Mark Alexander citing a case of “bio-bubble fatigue” as the Springboks came in for criticism after their recent performances in Australia.

“Our guys have been together for months now, moving from bubble to bubble, and at some point, that starts having a real impact,” Alexander told Sport24. “Bubble fatigue is real, and we have probably had the worst of it this year along with Argentina, who have also been away from home for a long time.”

The players will now have a few weeks to regenerate before attempting to finish a year of mixed fortunes on a high in the UK. DM