Disinformation in a time of Covid-19: The Electoral Code of Conduct 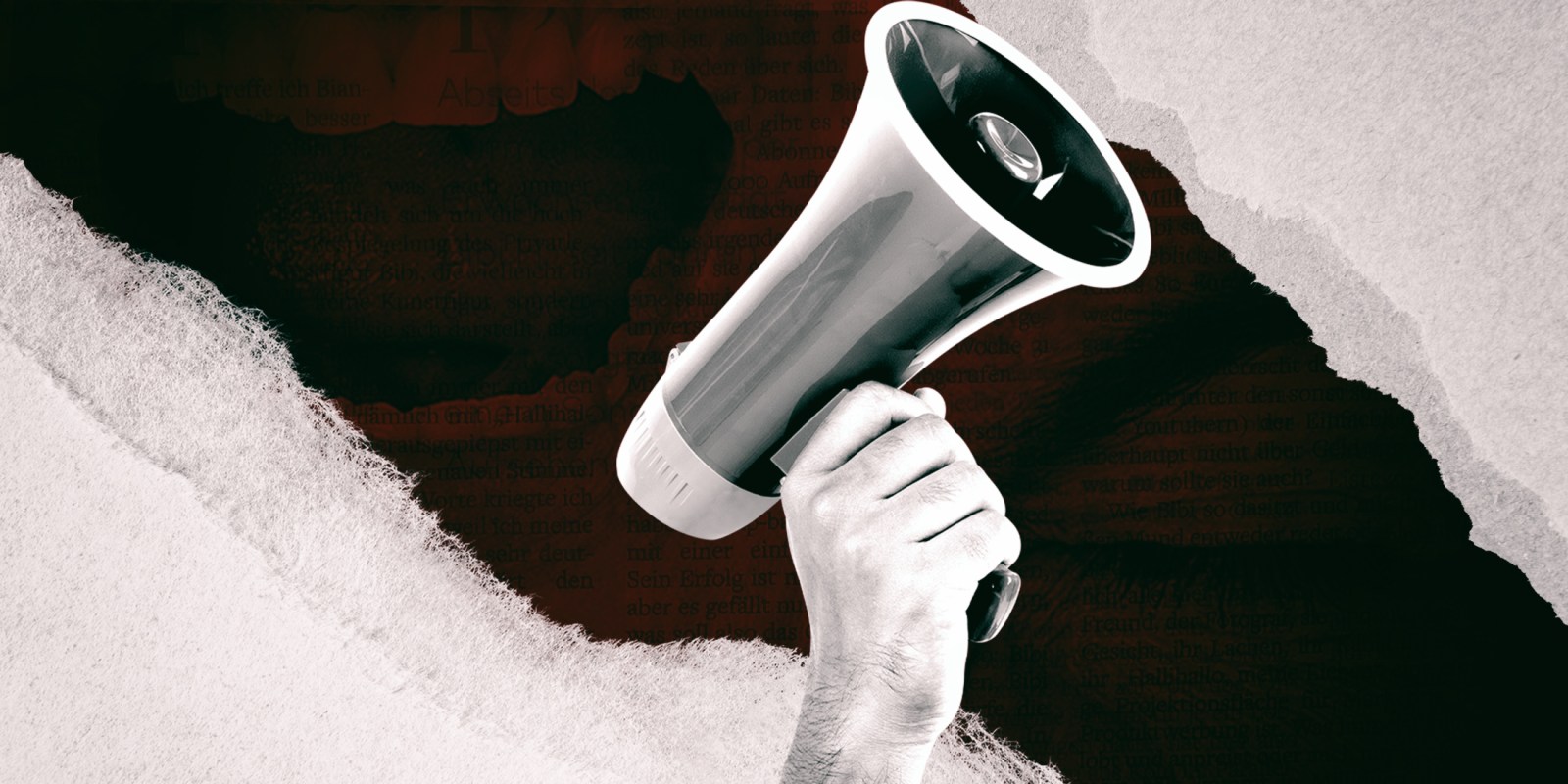 Now that the parties are bound by the Electoral Code of Conduct, challenge them when you see them breaking the code.

As with every election period, political parties are trying to entice the public to give them their vote, and promising all sorts of things they will do if elected. There are probably few who believe parties will deliver on these promises, but with 325 parties contesting the elections, maybe some will actually fulfil these promises if elected. Last week, parties signed the Electoral Code of Conduct.

Speaking at the event, the chairperson of the IEC, Glen Mashinini, said:

“This ceremony today is as important as democracy itself, of which credible elections are an irrefutable ingredient. This Code of Conduct provides parameters of conduct that are consistent with the vision of our democratic forebears who conceptualised a democratic society at peace with itself and indeed all its constituent elements.

“The Code of Conduct is thus a statutory instrument for the realisation of free and fair elections. It requires a deep sense of political leadership because its observance speaks to who we are as democrats but it also speaks to who we are individually and collectively as protagonists of orderly conduct of our public affairs. As leaders here represented, we should not fail our fellow compatriots; on the contrary, we should be torch-bearers leading the country to a vision of peace and tranquility.

The Code of Conduct sets out how the parties should conduct themselves. One of the elements the code specifies is that parties and candidates must: “Speak out against political violence and threats against other parties, the Electoral Commission, members of the public and the media.”

Now that the parties are bound by the code, challenge them when you see them breaking the code. If you see something dodgy on social media, report it to Real411, or to the IEC.

“The Electoral Court has jurisdiction in respect of all electoral disputes and complaints about infringements of the code. Any member of the public or political party has the right to approach this court directly to report allegations of violations of the code supported by the necessary evidence. Cases where criminality is involved, such as the defacing of or damage to property, should also be reported to the South African Police Service.” (IEC Chairperson Glen Mashinini.)

The IEC can only act if they have a complaint and evidence. As much as we expect the parties to adhere to the code, they will only do so if they know that all infringements will be reported. This is one of the few times your action can see a political party being held accountable. Use it if you see a violation.

The IEC also announced: “We are also pleased to announce that, following a global rise in disinformation, especially through digital platforms, and its potential impact on elections, the Electoral Commission is once again making available an innovative online reporting platform for citizens to report instances of alleged digital disinformation during the 2021 Municipal Elections.

“The digital platform is intended for complaints related only to social media and is not intended to replace existing channels and processes for investigating alleged breaches of the Code of Conduct. Developed in conjunction with Media Monitoring Africa, a non-governmental organisation focused on promoting independent, accurate and impartial reporting on elections, the platform will provide for the online submission and tracking of complaints relating to disinformation encountered on social media platforms.”

Here is the process from when a complaint is lodged, and how it moves from Real411 to the IEC. 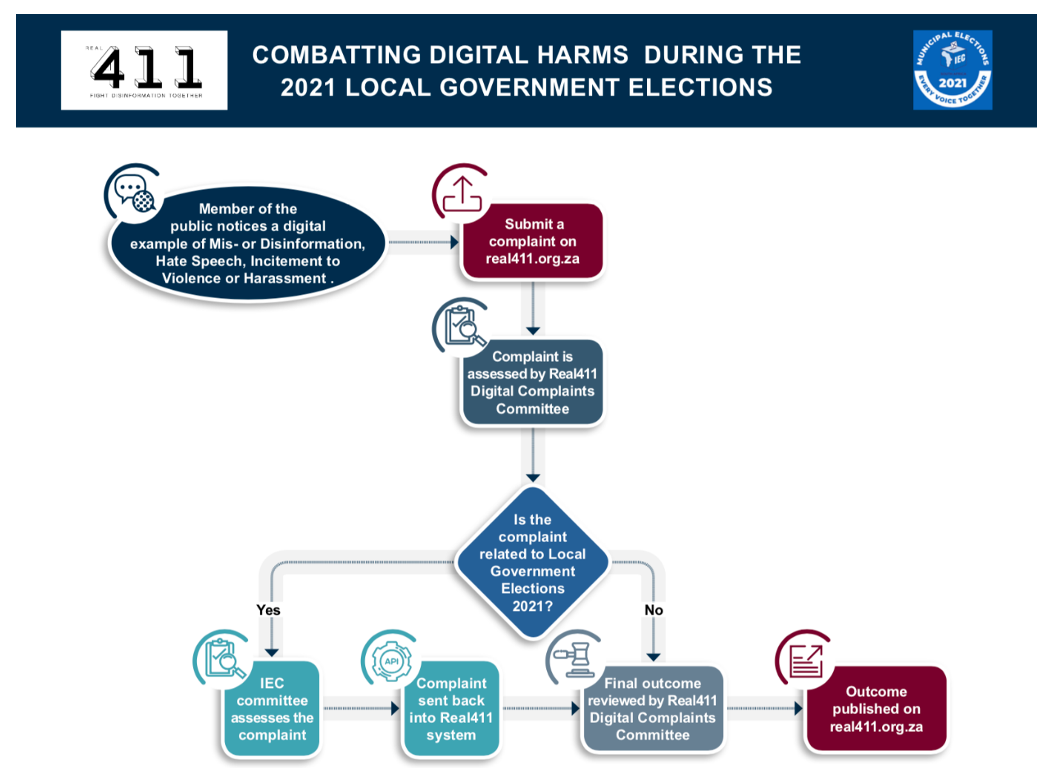 In essence, the Real411 process remains broadly the same, but with IEC oversight. Real411 supports the IEC in getting through election-related complaints. While Real411 publishes the final outcome, it only serves to advise the IEC on each complaint. The final decision for each electoral complaint resides, as is legally required, within the purview of the IEC. As an example, a person sees some content on Twitter that they believe might be a digital harm and they report it to Real411. Once in the system, the complaint is reviewed by three experts, who make up a Digital Complaints Committee (DCC). As an aside: we are always on the lookout for volunteers, and if you are keen please send an email to [email protected] All DCC members are volunteers and DCC members can select complaints but cannot select who the other members of the DCC teams are. None are office-bearers of any party.

On receiving the complaint, one of the questions a DCC member asks is if the complaint is election-related. The test for this is simple: Is a political party mentioned, does it relate to any aspect of the elections, and could it be electioneering?

The complaint is then analysed to see whether it meets the test for the four harms: disinformation, hate speech, incitement and harassment of journalists. Once that process is completed, the complaint goes to a member of the secretariat, all of whom are legal experts. If it is an election complaint, the secretariat then submits it to the IEC.

The IEC has its own Electoral Justice Management System, and when a new complaint comes in it is immediately registered so that it can be dealt with by the IEC team. The IEC then determines the final outcome.

We cannot remove all disinformation, but the more we expose it, the more the IEC is able to act on it, the greater the awareness and the more difficult it is for those who seek to spread it.

We need people to stand up and act against those who seek to exploit fears, against those who display no compassion and seek to heighten fear. You can act by reporting digital harms to Real411. It won’t stop disinformation, but it may reduce its spread and cause less harm. It is critical that we all play our part in combating and mitigating these digital offences.

To make it even more simple, download the Real411 mobile app.  We are in that magical period where political parties need to show us that they care, so in addition to asking what they will do in your area, ask them to issue one public statement that highlights and condemns any attacks on our journalists and then to demonstrate what action they took to help combat that. If they are edgy or push some other hogwash agenda, don’t easily vote for them, because they don’t believe in democracy. DM