The Kingmakers (Part Two): The key parties in power plays 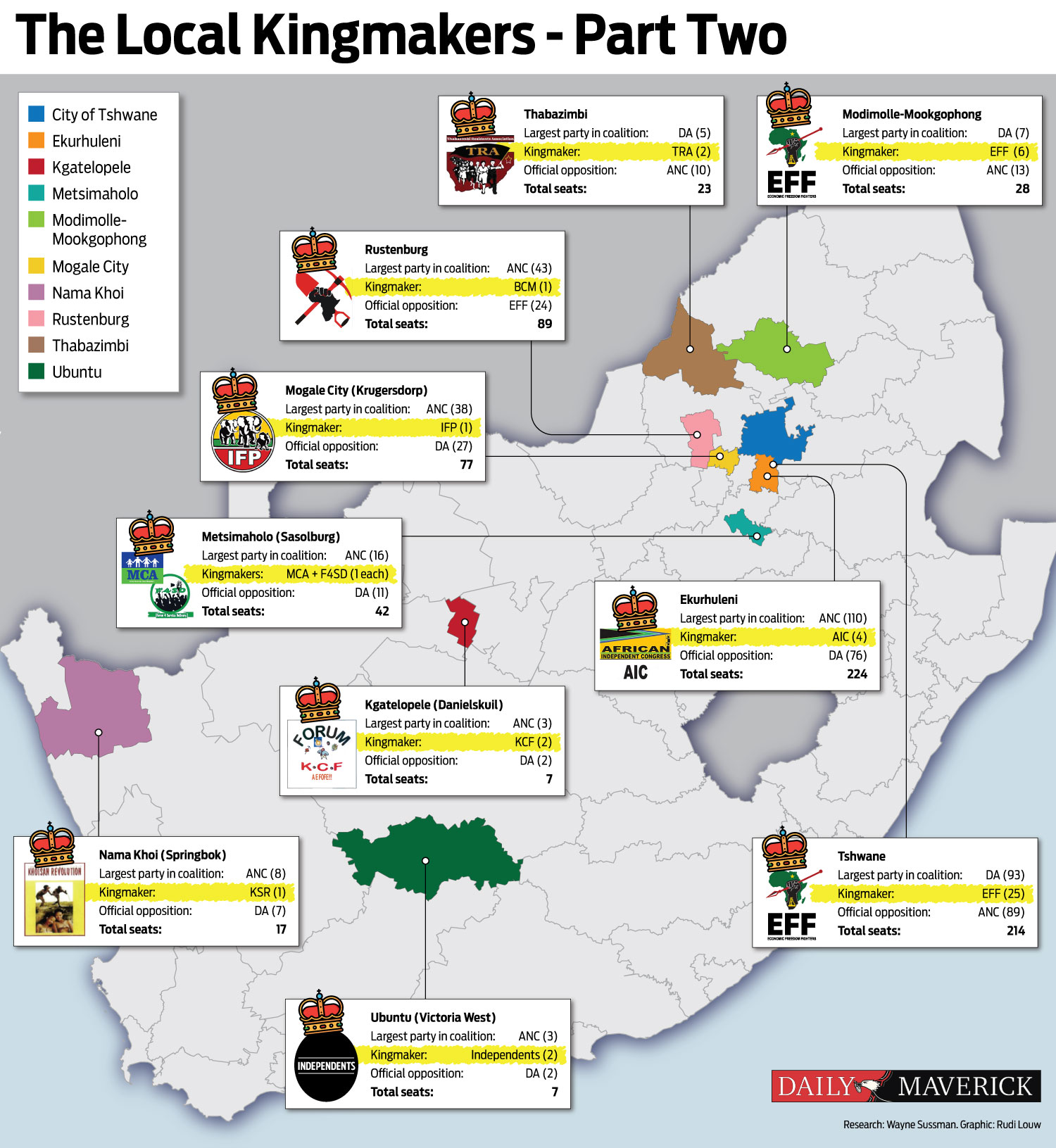 This second instalment of a two-part series looks at 10 municipalities and the kingmakers – the parties or individuals – that get to determine the fate of the dominant party.

This is Part Two of a two-part series. Read Part One here.

Kgatelopele falls under the ZF Mgcawu District. It’s limestone country and the seat of power is Danielskuil. In the 2016 elections, KFC finished third, winning two of the seven seats. It initially worked with the DA but then switched to the ANC.

Verdict – KFC has been beset by infighting and will be lucky to return to council.

Ubuntu is part of the Pixley Ka Seme District in the Karoo and its seat of power is in Victoria West but it also includes Richmond, Loxton and Hutchinson. In 2016, the ANC won three of seven seats and the DA two, the final two going to two independent councillors, who emerged as kingmakers.

Both independents initially worked with the DA but the ANC did a deal with one of them and has ruled the council since the DA’s agreement collapsed. The independents had both come from the ANC.

Verdict – Residents of Ubuntu were effectively held to ransom by the two independent councillors who tried to one-up each other. It is questionable that they delivered on their promises to the wards they represent and the municipality they were elected to serve.

Springbok is the seat of power in Nama Khoi, which also includes the towns of Concordia and Kleinzee. The ANC won eight of 17 seats in 2016 while the DA took seven. KSR took one seat along with Cope.

Cope agreed to work with the DA, making KSR the kingmakers. They decided to work with the ANC, which has governed here for the full term. If one has to consider the 2019 provincial results, KSR would have lost its seat. The party didn’t contest a Ward 2 by-election in 2021.

Verdict – KSR will battle to retain its seat in Nama Khoi. This suggests its supporters did not feel its impact in the municipality.

This municipality was formed in 2016 after a merger between Modimolle and Mookgophong municipalities. The ANC fell under 50% in 2016, and the opposition patched together a coalition including the DA and FF+, with support from the EFF.

The DA and FF+ were always going to work together, but it was the EFF’s seven seats that pushed the coalition, which has lasted its full term, over the line.

Verdict – This is an example of councillors, despite their very different world views, staying the course in a coalition. The municipality had its challenges but this arrangement suggests that localised coalitions or arrangements are a possible way forward for our politics.

In 2011 the ANC won 16 out of 23 seats in Thabazimbi but it lost six seats, and its majority, in 2016. The DA, EFF and FF+ agreed to work together with kingmakers the TRA, which only won two seats but took the mayoral chain.

The TRA party had its own internal squabbles, which saw its original councillors being expelled from the party. Those vacancies were filled and the coalition has held.

Verdict – The 2021 election will determine whether the voters of Regorile, where the TRA saw its best performances, will forgive the TRA for its petty infighting in the early days of this term.

The DA won the largest share of the vote in Tshwane in 2016 with 93 seats, but neither it nor the ANC, with 89 seats, could form a majority without the EFF’s 25 seats.

Tshwane differed from Johannesburg, Ekurhuleni and Nelson Mandela Bay, in that, if the ANC and DA were not willing to work together, they needed a nod of approval from the red berets. The EFF won more than 30% of the vote in four wards. The metro is on its third mayor this term, but there has been relative stability since the DA’s Randall Williams became mayor.

Verdict – The instability of the first few years of this arrangement was not good for the EFF or the DA and its coalition partners.

The ANC won 49% in 2016 and was originally three seats short of a majority on the 224-seat council. It turned to the AIC to form a coalition. The ANC also won support from other small parties, but AIC’s four seats gave it the necessary stability. The coalition has been the flagship metro for the ANC in SA.

The AIC’s fourth-place finish was a surprise, beating more established national parties like the FF+ and the IFP.

Sivuyile Ngodwana from the AIC said the major lesson he learnt was that, “for coalitions to work, sacrifices need to be made”.

Verdict – Voters cooled on the AIC in Ekurhuleni in 2019. Even though there was stability in the coalition, it is hard to see this benefiting the AIC at the ballot box this time around.

There were surreal scenes in the Mogale City council chamber in 2016 when the DA’s Lynn Pannall, an elderly white woman from the suburb of Krugersdorp, was elected mayor of the largest municipality in the West Rand. EFF councillors celebrated as the ANC’s reign came to an end.

The DA won 27 of the 77 seats and with the EFF’s nine seats and two from FF+ it matched the ANC’s 38 seats. The IFP won the last seat in the council. As part of a national agreement, the IFP councillor was expected to support the DA coalition.

Pannall resigned owing to ill health and was replaced by another DA mayor, but in 2018 the IFP councillor switched sides and gave the ANC the one seat it needed to reclaim the municipality.

Verdict – It is hard to see the voters rewarding the IFP for its role as kingmaker. The party will either match its 2016 showing or at best win an additional seat.

In Rustenburg, the EFF had a legitimate claim to the mayoralty in 2016, as the ANC fell two seats short of a majority. The EFF and DA backed a regional party, the F4SD. The local BCM supported the ANC, giving it the mayoral chain and every municipality in North West.

The ANC won 43 out of 89 seats and crafted a coalition deal with the AIC, which had one seat, and the BCM, which also won one seat.

The coalition endured for its full term. There were moments when the BCM threatened to end the coalition but the ANC and BCM ultimately patched things up. The residents of Boitekong will decide whether they thought the BCM delivered on its promises to them and whether it will return after the 2021 local government elections.

Verdict – The BCM will have to work hard to convince voters that it has left the municipality in a better place than what it inherited in 2016.

The ANC lost its grip on this industrial town in 2016 when the DA and other opposition parties backed the local MCA. The local party won two out of 42 seats and was given the mayoral chain as part of the coalition deal.

The coalition didn’t last long. By late 2017, the council had been dissolved and voters went back to the polls. To make matters seemingly worse for the ANC, its tripartite alliance partner, the South African Communist Party (SACP) contested the elections.

The DA was unable to rally its base. The ANC ended up losing three seats to the SACP. The DA won 11 seats, the EFF eight and the FF+ one. This meant the opposition parties needed to find two more seats to continue governing Metsimaholo.

There were two kingmakers in Metsimaholo in 2017: the F4SD and the MCA. The MCA lost one of its seats in the election rerun. Both parties had agreed to work with the opposition in 2016 but in late 2017 switched to the ANC. This saw the SACP don the mayoral chain, and this coalition has remained in control for the rest of the term.

“The coalition government was a challenging experience,” said Mayor Lindiwe Tshongwe, who will run under the ANC this year, as the SACP isn’t competing.

Tshongwe said that starting her term in 2017 “meant that we had to catch up on the year we had lost out on”.

The MCA’s Lennox Mashia admitted that the “past five years haven’t been spent well” owing to disputes among council members, unfilled vacancies in the municipalities and court cases “which deprived us of spending time with the community”.

Verdict – This coalition did not improve the running of the municipality. Smaller parties that were kingmakers are likely to struggle in the elections. DM168