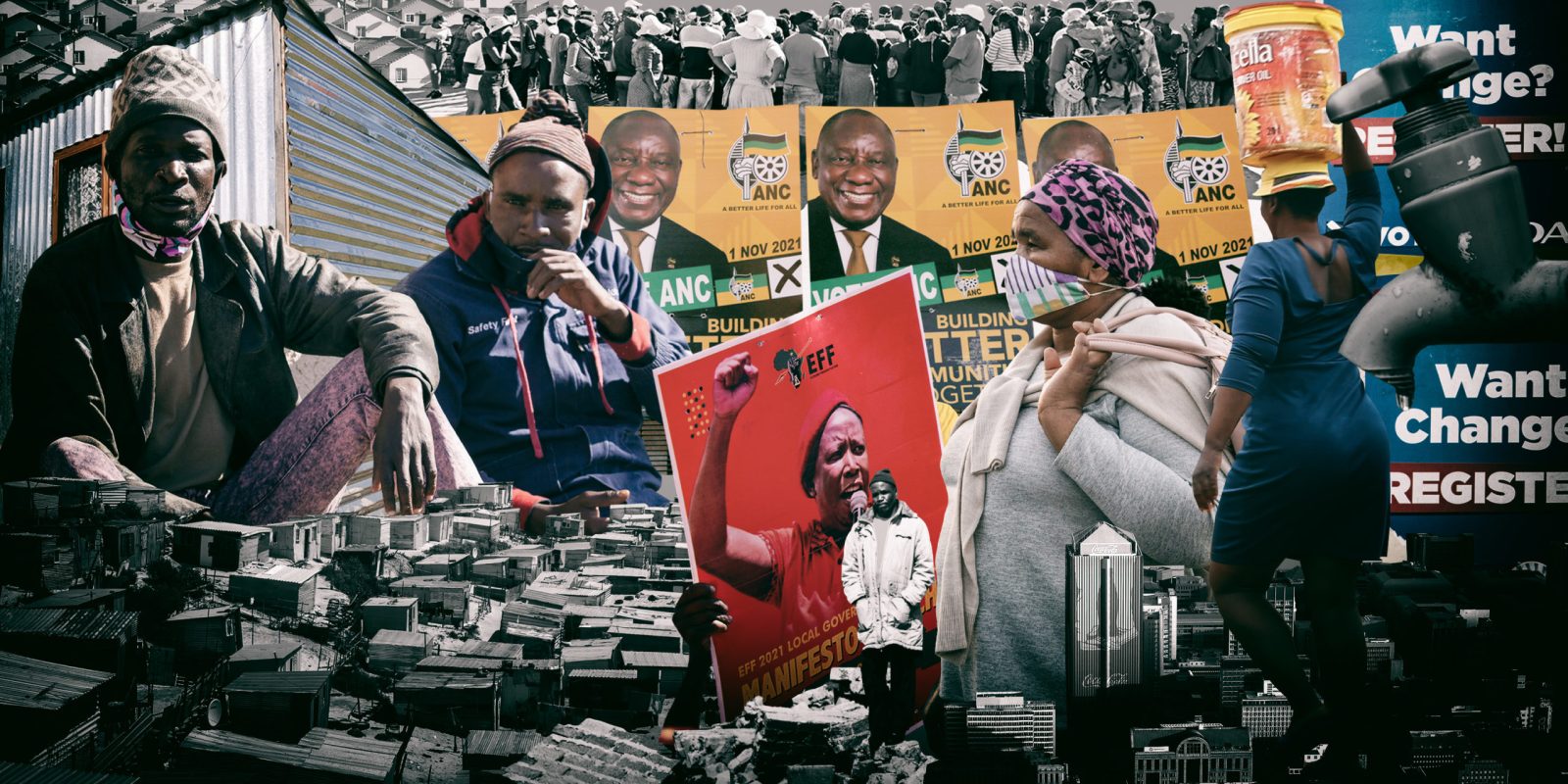 From clean water and dignified sanitation, repaired potholes to land and property audits and more broadband. It’s all in the 2021 municipal poll manifestos — although disillusionment and disengagement may yet be the spanner in the election wheel.

“We will do and be better,” seems the pay-off line for the governing ANC. Acknowledging it hasn’t done that well in municipalities and hasn’t deployed its best people, the party’s 2021 local government manifesto heavily relies on national issues like jobs, procurement reform and Eskom, and reminders of how the ANC since 1994 introduced free basic services and boosted the social wage through grants, subsidised education and free housing. ANC party president Cyril Ramaphosa headlines the manifesto entitled “Building Better Communities Together”.

Getting it done is what the DA built its 2021 local government offering around. This includes referencing successes — from wheelie bins in Cape Agulhas to CCTV cameras in Midvaal — and hammering home its Cape Town and Western Cape administrations’ track records. But it also reminds residents of their duties, from paying for services to sticking to the rules. The DA manifesto front shows a diverse crowd waving South African flags, headed: “A record of action and a promise of more”.

With Jobs and Land, Now! the EFF continues its 2016 national election outlook into the 2021 local government poll. Talking of commitments, the aims are “self-reliant, corrupt-free municipalities that deliver reliable services to our people” within EFF policy pillars like expropriation without compensation and nationalising banks and mines. A main manifesto is elaborated, with provincial ones listing a hall in this ward or toilets in that ward. An unapologetically red manifesto cover-page sports the party motto and “Vote EFF”.

Its 2021 election motto “Trust us. We work for you” continues the IFP’s May 2019 election trust theme that boosted its performance at the hustings then. But it’s local government, and the central manifesto outlining a 10-point plan, is fleshed out with specific pledges for districts/provinces with firm appeals to go out to vote on 1 November. The manifesto, and its précis two-pager, are heavy on party colours — and are headlined by party founder and President Emeritus Prince Mangosuthu Buthelezi.

Ex-Cape Town DA mayor Patricia de Lille, now public works minister, goes to the hustings for the first time for Good, although she’s an election veteran. Since launching the party’s plan for South Africa manifesto in mid-September, posters of her in orange boxing gloves popped up urging, “Make your hood GOOD”.

Former DA Johannesburg mayor Herman Mashaba, the Hair like Me business tycoon who turned to politics in December 2015, is charting his own course. The motto is #LetsFixSouthAfrica, the party colours bright green and the appeal to “patriotic South Africans that are committed to professional and ethical public service…”.

Also in the running for the 1 November municipal poll

Cope held a low-key manifesto launch in Kempton Park on Heritage Day with the motto “Defend the Constitution” setting out a focus on manufacturing, infrastructure and jobs. Also talking jobs, better healthcare and housing and more is the Patriotic Alliance, or self-proclaimed “The Last Hope”, focused on campaign trail appearances bolstered by May’s by-elections when it took two wards off the DA in Johannesburg’s Eldorado Park.

The African Christian Democratic Party (ACDP) will launch its manifesto on Saturday, 2 October.

The African Transformation Movement (ATM) will contest its first local government elections with its launch also on 2 October, at the Zamukulungisa TACC Hall in Mthatha, Eastern Cape.

Also on Saturday, and also in Mthatha at the Ngangelizwe Stadium, the United Democratic Movement (UDM), that has already hit the campaign trail, will formally launch its manifesto for, among other pledges, ethical governance, communication with communities to establish needs, quality basic services and removing red tape to stimulate local economies.

Bringing up the rear is the Freedom Front Plus that on 9 October launches its election manifesto based on its eight-point plan for improving municipal management and service delivery by appointment only on merit, establishing free trade zones for economic development, ending the “unnecessary changing of place and street names”, and fair taxes and tariffs.

And then there’s more — a choice of independents and newcomers

And among the 1,181 registered parties, from mainstream political parties to local residents’ organisations, voters will also be able to cast ballots for newcomers like the Makana Citizens Front.

The organisation with the motto “Working for you, not for party head office” arose from the mid-2021 protests over the failure by the administration of the town previously known as Grahamstown to deliver reliable water, decent sanitation, cleanliness and repaired potholes. That’s regardless of court orders.

Anyone thinking that campaigning, and casting a ballot on local issues is a dead-end against the might of establishment parties must rethink.

The community organisation Forum 4 Service Delivery was kingmaker in Rustenburg, the centre of South Africa’s Platinum Belt. Opposition to the 2005 incorporation of Matatiele into the Eastern Cape led to the African Independent Congress (AIC) going from 10 local council seats in the 2006 municipal poll to 55 council seats countrywide in the 2016 local elections — it was kingmaker in securing Ekurhuleni for the ANC, all the way to one seat in Parliament since 2019.

The road to the 2021 local government elections is short, but set to be of rush-hour intensity. DM