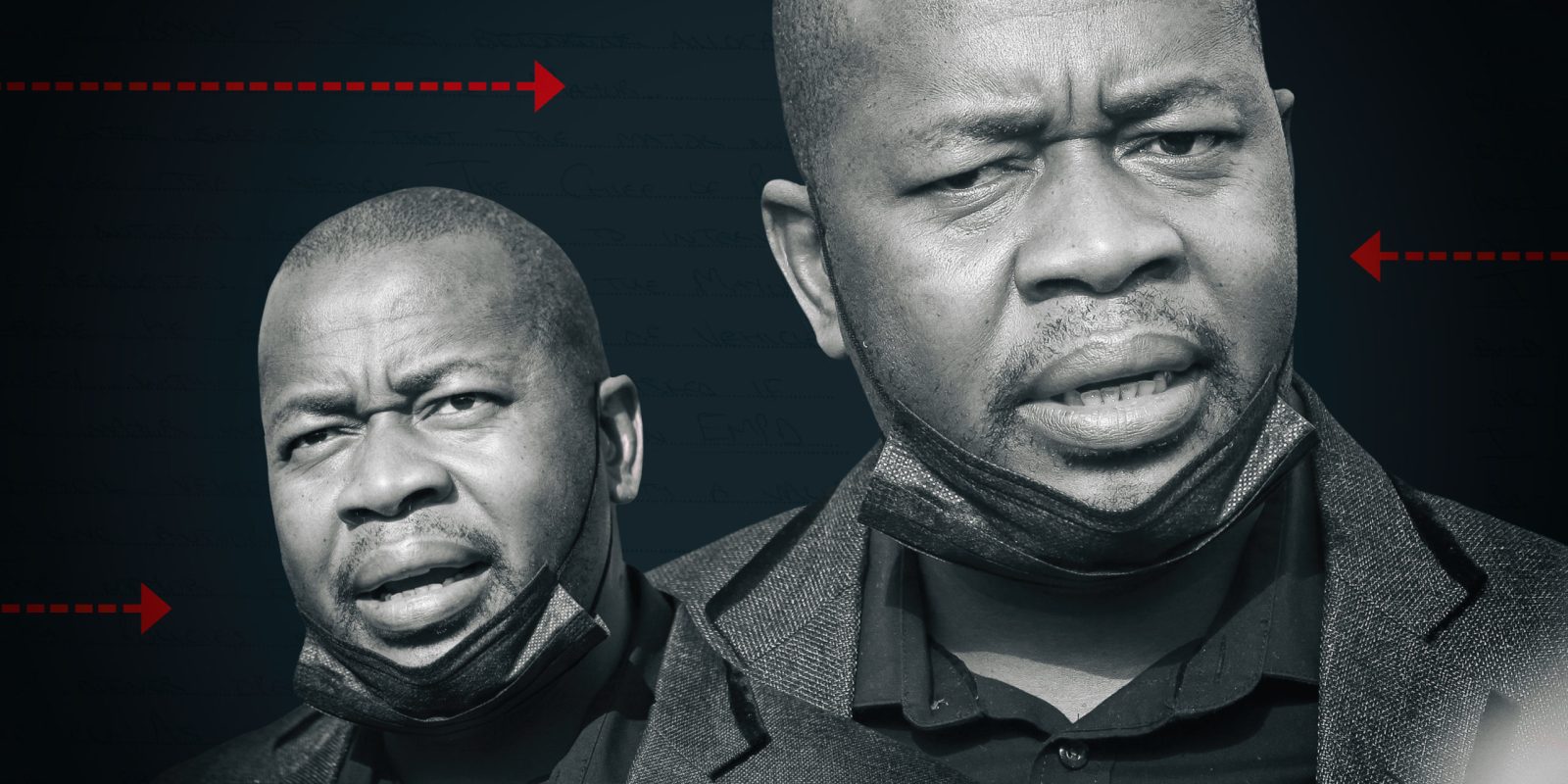 City of Ekurhuleni Mayor Mzwandile Masina was in a high-speed, midnight crash at the wheel of a luxury municipal car he allegedly had no permission to drive. A witness told police he behaved as if drunk. Thirteen months later, it is clear that the embarrassing incident has been hushed up.

Shortly after midnight on 20 August 2020, a large goods truck driving down the N12 West highway near Alberton was struck from behind by a black BMW 540i, said to have been driven at high speed. It was not a serious accident: no one was hurt, the truck was undamaged and the car was scraped along the passenger side, with the mirror broken.

But what turned a minor fender-bender into a political mystery is what unfolded next, as described in written statements from a witness and metro police and in interviews with amaBhungane. The BMW was driven by mayor Mzwandile Masina, breaking curfew in a city-owned car he had allegedly used without permission. He was removed from the scene before police investigations had finished and no witness statement was taken from him.

The truck driver, who has asked not to be named, told amaBhungane that he was driving an articulated truck owned by SF Logistics. Close to the turnoffs to the N12 and N3, he and his assistant in the passenger seat noticed in their rear-view mirrors that a car had appeared behind them, driving at high speed and swinging across lanes. “Then I heard a bump and noticed a BMW next to my back tyre on my side.”

He slowed the truck, stopped it and got out. Two more cars stopped behind them, with men climbing out and shouting “Mayor, are you alright?” They then approached the truck driver “saying that I had hit the mayor and they were aggressive. The driver (Masina) approached and he was shouting at me, and people stopped him.”

As the heated confrontation continued, a woman appeared and identified herself to the truck driver as Masina’s wife. “She was very understanding when I explained what had happened and she took him away.”

By now, according to a witness, the scene bore no resemblance to a minor accident, with a number of metro police vehicles arriving, as well as the mayor’s VIP protection entourage.

AmaBhungane asked the truck driver whether it was true that he failed to stop after the accident. He said that a heavily laden goods truck could not be instantly stopped, but that he had slowed it down and stopped further up the road.

A second officer arrived at the scene at 00:50. By then, Masina had departed, and only the truck driver was present. The truck driver provided a sworn statement in which he made an additional allegation: “Immediately I hear a sound, he bumped my tyre of my back trailer and I noticed he was drug [drunk].”

At 08:30 that morning, a more senior officer, Superintendent Kelobogile Thepa, was told about the accident. She discovered that the BMW did not belong to Masina, but was a “blue light” VIP vehicle allocated to the office of the mayor.

Thepa was head of the Ekurhuleni Metro Police Department (EMPD) VIP protection unit at the time.

In a sworn statement attached to the investigation’s report, she said that after she found out that the mayor was driving an EMPD VIP vehicle, she notified the chief of police and requested him to intervene.

“He [Chief of Police] requested a meeting with the Mayor where he explained processes of vehicle policy within the EMPD and asked if the Mayor was aware that an EMPD vehicle is operated with a valid driving authorisation.

“The mayor expressed lack of knowledge with policies of the EMPD and promised never to operate an EMPD allocated vehicle as he is allocated officers for protection and conveyance.”

In the 13 months since the accident, no further investigations have occurred. The official position is that it was a minor accident warranting no further examination. But a number of aspects certainly appear to deserve further attention:

AmaBhungane spoke to several people who were either on the scene or were familiar with the investigation. No one would speak on the record, either because they were not authorised to speak to the media, or because they had been warned “not to say anything relating to the incident ever again”.

Said one person: “How can you investigate your boss objectively, a person who can make your life at work a misery. The reality is that there is a lot of intimidation happening at Ekurhuleni.”

Said another: “The mayor has several personal cars. Why did he take this particular blue light car meant for police officers in the middle of the night? You need a permit to drive a car assigned to police. Is this not an abuse of state resources? When the accident happened, the mayor called his VIP entourage immediately and other senior EMPD officers, and yet this was a minor accident and straightforward.”

The mayor’s spokesperson, Phakamile Mbengashe, provided an explanation as to why the mayor was on the road during a curfew.

“On the evening of 20 August 2020, the Executive Mayor had just concluded a series of service delivery oversight visits in Vosloorus when he was notified of a medical emergency concerning a close family relative in Katlehong, which he urgently attended to. The family member subsequently passed away on the same day, 20 August 2020.”

Mbengashe provided a death certificate of the person showing she did indeed die on 20 August 2020.

He claimed there was no intervention by the chief of police: “All EMPD processes were followed in accordance with the Department’s Policies.”

Mbengashe said the South African Local Government Association mayoral handbook, Section 5.1.3.1, dealing with terms for the use of official vehicles, leaves it to the discretion of the mayor to utilise a car at the expense of the municipality for any reasonable purpose.

However, this section deals with a specific vehicle allocated for exclusive mayoral use, including for personal purposes, whereas it is not clear that the same provision applies to VIP protection vehicles assigned to the mayor’s office.

Section 5.1.3.7 notes that: “The use of any other municipal vehicle by the Mayor is not permissible.”

Mbengashe said damage to the car had been minimal, isolated to only a rear mirror, and the mayor had covered the cost of the damage in his personal capacity.

However, pictures from the accident report show not only a broken mirror, but a long gash on the passenger side, running across both front and back doors. (See photograph above)

If Masina blames the truck driver for the damage, why would he choose to pay for panelbeating out of his own pocket? DM