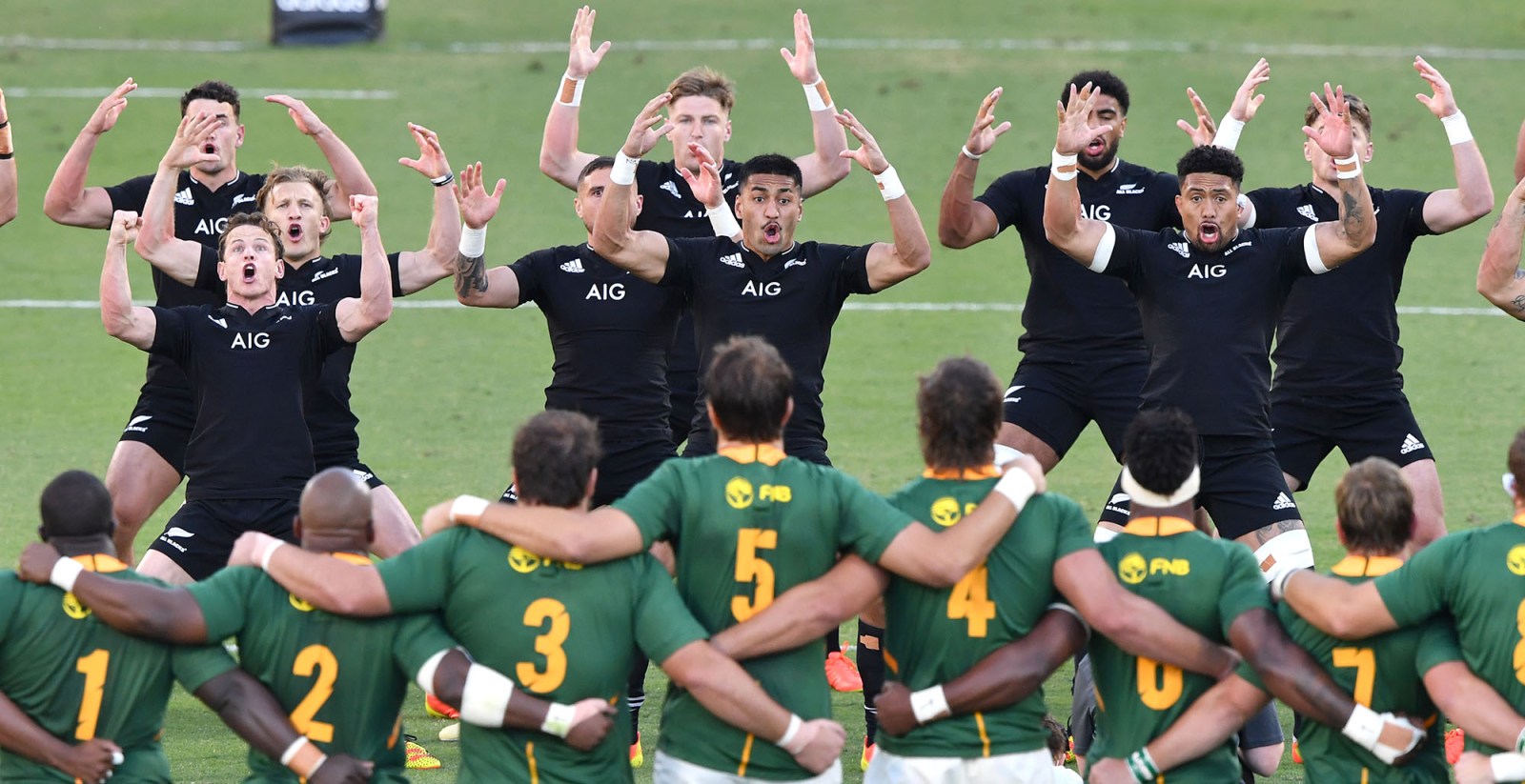 All Blacks players (rear) perform the Haka prior to the start of the Rugby Championship Round 5 match between New Zealand and South Africa at Queensland Country Bank Stadium in Townsville, Australia, 25 September 2021. (Photo: EPA-EFE / Darren England)

The Springboks have nothing but pride to play for when they meet the All Blacks in their final 2021 Rugby Championship match in Gold Coast on Saturday.

The highs of winning the tense series against the British & Irish Lions while South Africa was in the grip of a brutal third Covid wave and unprecedented civil unrest, seems a long, long time ago now for the Springboks.

In sport, as the old cliché goes, a week can be a long time. Nowhere is that truer than in South Africa and in the context of the world champion Springboks, that truism holds firm.

The Boks are on a three-match losing streak. They have lost twice to the Wallabies and once to the All Blacks and along the way have relinquished their No 1 world ranking to New Zealand. They are battered and bruised and into a 13th week in the now ubiquitous bio-safe environment (BSE), or to use the colloquial parlance — the bio-bubble.

They keep talking a good game, and last week they even delivered one despite a cruel 19-17 loss against the All Blacks in Townsville. But the reality is that they are shot. They have reached the bottom of a mental well after so long locked down in one another’s company.

The All Blacks have only been in a bio-bubble for four weeks and will be the fresher team. The Boks’ major danger though, doesn’t stem from the men in black, but from themselves. They have to avoid having one foot on the plane home where two weeks of respite from the BSE awaits.

How they will find the inner strength for one last push is beyond the understanding of those of us who have not suffered as they have, both on and off the field. By all rights they should lose this one by some distance, but if there is one constant of this Bok team, it’s that they always find ways to surprise.

They came from 1-0 down against the Lions after almost no rugby in 20 months, to win the series 2-1. Last week the Boks bullied and bashed the All Blacks to the edge of the abyss, before losing the match because of their own errors rather than the All Blacks’ superiority. They have found ways to win from cornered positions, and also, to lose from the high ground.

The Boks refuse to apologise for their aerial kicking game that has caused so much havoc for opponents. And they ignore their shortcomings by almost exclusively playing to their strengths. By God, it’s not pretty, but it’s effective.

The Lions and the All Blacks in particular, failed to cope well under the Boks’ aerial bombardment. The Lions lost the series because they were second-best in that department and were not clinical enough in others.

The All Blacks managed to win last week’s game despite being exposed under the high ball because they were ruthless in converting the few chances they had.

For The Boks’ tactical kicking game to be effective, it takes complete commitment from players to execute it at a level of intensity that makes it almost unbeatable. Almost.

All Black coach Ian Foster recognised the threat despite winning last week’s game by replacing both wings for the second Test. George Bridge and Will Jordan were more jittery than a teenage boy on a first date under the high ball last week, and are replaced by Rieko Ioane and Sevu Reece.

Ioane has been a revelation at centre, but last week he was smothered by the Boks’ asphyxiating defence in the midfield. Anton Leinert-Brown will start in the No 13 jersey as Ioane moves to wing.

Moving Ioane into a wider channel means he could have more space to exploit his pace and power. And his size and physicality will theoretically make him a stronger force under the aerial assault that will surely come.

Bok coach Jacques Nienaber, by contrast, has made one injury-enforced change to the starting lineup, with Ox Nche coming in at loosehead prop and Trevor Nyakane moving to the tighthead because of injury to Frans Malherbe. That reshuffle aside, Nienaber has shown commitment to the game plan and players to execute it.

Halfbacks Handre Pollard and Faf de Klerk have been under scrutiny after some recent mediocre displays. Nienaber, though, remains loyal to them despite some glaring errors in recent weeks, and the duo therefore needs to repay that faith this weekend.

Pollard’s wayward punt late in last week’s game, when he was playing under advantage, ended in an All Black penalty, which Jordie Barrett slotted to win the game. If it has ruffled Pollard, you wouldn’t know it by his demeanour when fronting up to the media this week.

“Of course, losing a couple in a row would make you think that you’d lose a bit of confidence,” Pollard said this week. “But, particularly among our team leaders, we really have so much belief in our process and we get confidence from our preparation and from each other.

“We don’t really look back at results, even if you won the previous week. We give confidence to each other, the way we interact and train. When Saturday comes, it’s really just about executing as best as you can.

“There will be a few decisions you ideally would’ve done differently, but that’s rugby. But we still train the same and with the same intensity and quality.”

And it will take something unusual for the Boks to deviate from the game plan that has served them well, recent results notwithstanding. Not even biologists refer to DNA as much as the Bok camp.

“We’ve got a specific soul and DNA in this team. We trust our plan. Of course, it is different [using tactical kicks in more promising attacking positions] and the boys stuck to it really well,” Pollard said.

“That’s an area where we really feel we’re the best in the world — the aerial contests. It’s something we really work hard at. It’s unorthodox, but we do it.”

And the Bok hymn sheet had clearly been passed down the line to the front row, where Nche sang from it this week as well.

“We have good set pieces, so they’ll try to put us under pressure there and increase the tempo to get the ball in and out as quickly as possible so that it doesn’t become too much of a contest there,” Nche said.

“They’ll also probably try to keep us away from our DNA, which is the physical confrontation in attack, so it should be an interesting match. From our perspective though, we are just going to keep doing what we do and play according to our strengths.

“If we can take them on up front, win the little battles, make our tackles and carry well at a good intensity throughout the match, we could put ourselves in a good position to finish the competition on a strong note.”

The Boks are talking a good game, as they should. But they are also human and have endured a taxing time under lock and key in various BSEs.

An unlikely victory on Saturday would be their greatest achievement yet.