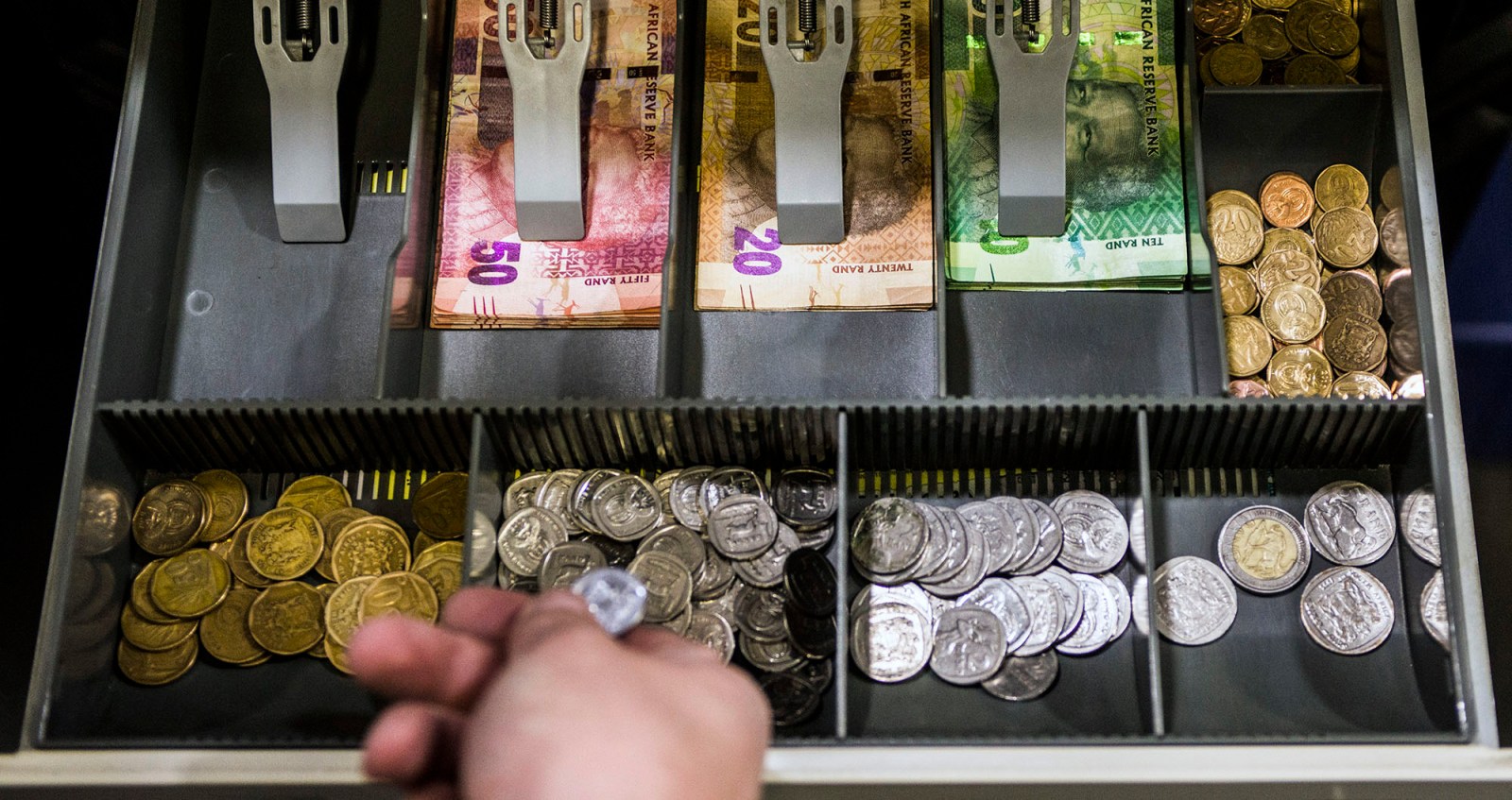 The nature of household expenditure has assumed a profound change, with several categories benefiting from the pandemic’s disruption to economic activity, while others have been dealt a blow by the imposition of fairly harsh lockdown restrictions.

The Covid-19 pandemic changed this pattern temporarily, with the second quarter of 2020 recording an abnormal decline in the level of economic activity. Since then, however, the traditional pattern has been restored, driven mainly by the dominant demand factor for private consumption expenditure. 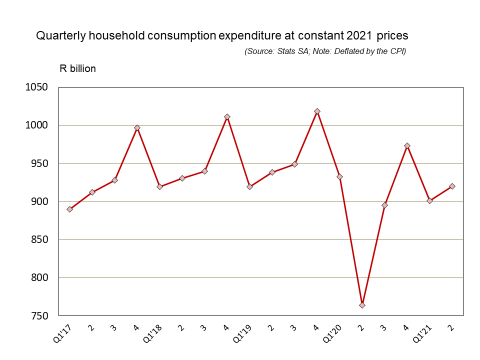 The nature of household expenditure has, however, assumed a more profound change, with several categories benefiting from the pandemic’s disruption to economic activity, while others have been dealt a blow by the imposition of fairly harsh lockdown restrictions — both domestic and globally.

To compare the latest second-quarter GDP data with the same quarter of last year obfuscates any objective analysis of trend changes to both the demand-side and supply-side of economic activity. This is confirmed by the ridiculously high year-on-year rate of nominal GDP growth of almost 27% during the second quarter of 2021.

It is therefore more useful to use the second quarter of 2019 (pre-Covid) as a benchmark for gauging any meaningful changes to consumer behaviour. It should be noted that year-on-year comparisons eliminate seasonal influences.

Final consumption expenditure by households represents two thirds of gross domestic expenditure, with government spending and capital formation accounting for the other third. When net exports are added to complete the aggregate demand side of GDP, this contribution dropped to 60% during the second quarter of 2021, thanks to the all-time record high for exports.

Due to its sheer size, household expenditure often serves as a shortcut to any reflection on the state of the economy, while also representing a measure that is closely associated with the spending habits of all citizens.

This indicator is permanently being disaggregated and analysed by producers of goods and services, to determine any meaningful shifts in demand. It tells producers what consumers are buying and what they are prepared to pay for their purchases.

During the second quarter of 2021, private consumption expenditure amounted to R920-billion, which was 5% higher than two years ago in nominal terms, but 1.9% lower when adjusted for inflation (as measured by the consumer price index — CPI). The latter is probably par for the course when considering the debilitating economic impact of the pandemic on some sectors of the economy, especially the hospitality industry. 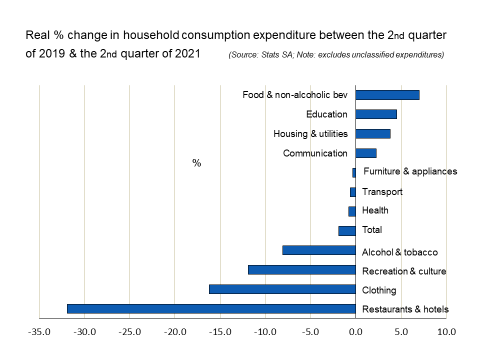 During April to June, South African households spent 32% less at restaurants and hotels than two years earlier, while spending on clothing declined by 16%. On the other side of the equation, food and non-alcoholic beverages were the winners, boasting an increase in household spending of 7% over the second quarter of 2019. Communication, education and housing & utilities also posted positive growth rates.

Food companies may be undervalued

Viewed from an equity investment perspective, food producers listed on the JSE reflect the higher priority afforded to this category of household expenditure, but this sub-sector is trailing the overall equity market trend.

An investment in food companies on the JSE with a market capitalisation of more than R1-billion, weighted according to their market value, would have yielded a capital gain of 34% between their recent lows and values as at 27 September. The JSE All Share Index doubled up on this figure, rising by 68% since March last year.

Compared to companies in the sector for industrial metals and mining, however, this is paltry. The capital appreciation of companies in this sector with a market capitalisation of more than R40-billion would have returned 142% to an investor between March 2020 and 27 September 2021 — with some handsome dividends on top of this capital gain.

In the event of the Evergrande debacle in China resulting in significant delays for the country’s ambitious housing and infrastructure development projects, the tables may start turning on the recent performance of some JSE sectors.

Regarding a longer-term view, it should also be borne in mind that most sectors that took a hammering during the worst of the pandemic stand to recover more than fully once herd immunity has been attained and old spending habits start returning. DM/BM