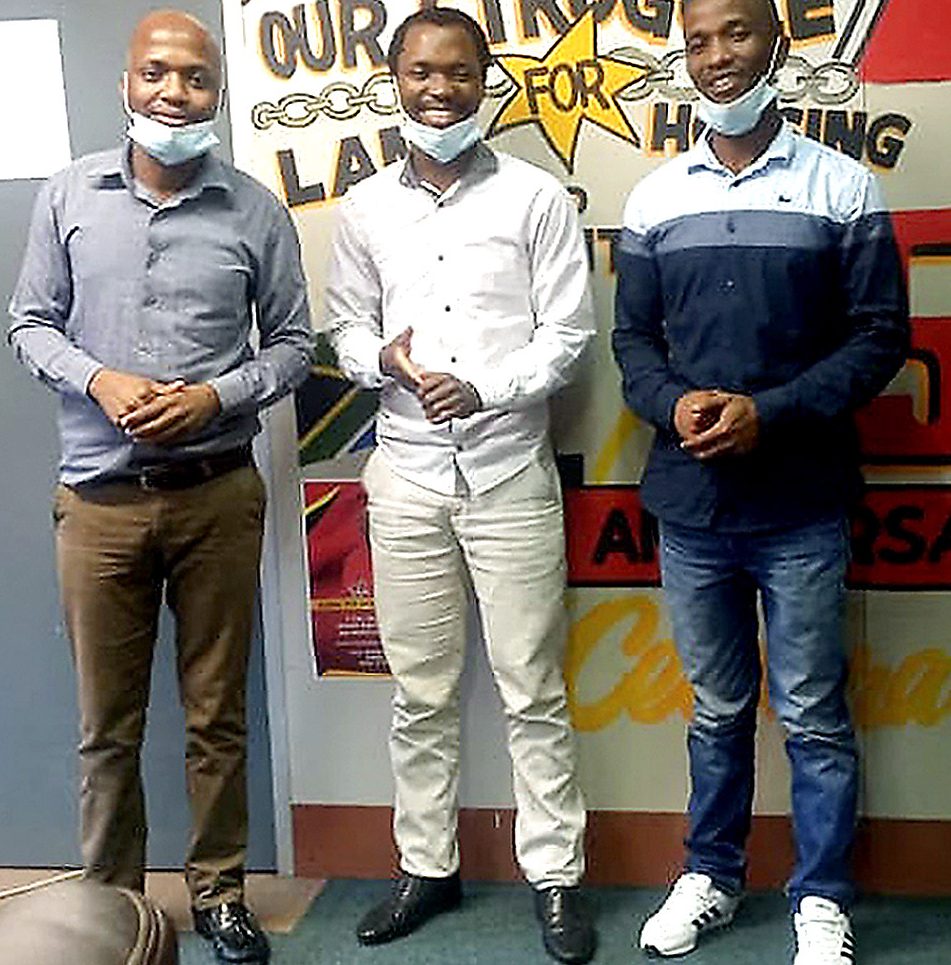 All charges were dropped against Left, Ayanda Ngila, Lindokuhle Mnguni, Right, Lando Tshazi, who are now free after being detained in the notorious Westville Prison for more than six months. (Photo: Supplied)

Charges have been dropped against three Abahlali baseMjondolo members who were detained in Westville Prison for the alleged murder of Vuzi Shezi in Cato Manor on 16 March.

The investigating officer who pursued charges against Lindokuhle Mnguni, Lando Tshazi and Ayanda Ngila who were detained in Westville Prison for the alleged murder of Vuzi Shezi in Cato Manor on 16 March this year, has dropped the charges and dismissed the case,  according to an Abahalali baseMjondolo statement. This means that the men are now free, having been in prison for six months.

The men’s arrests came as a result of conflict between eKhenana residents and police, the local ANC and eThekwini municipality, who Abahalali baseMjondolo says were trying to convert communally owned land of eKhenena in Cato Manor into private property in order to profit from it.

The statement claims that the witnesses are part of a family associated with the ANC in the area. The statement says that the ANC associated family had ‘played a central role’ in trying to forcefully turn the communal land, private for their own profit.

The autopsy report showed that the murder of Shezi did not happen as the witnesses had described and, in recent weeks, the two witnesses submitted new statements to the investigating officer in which they admit having lied in their original witness statements.

The organisation claims that the ANC has unsuccessfully been trying to infiltrate the residents of eKhenena by trying to get ANC members elected within the community’s leadership structures.

“Serious questions must be asked of the police and the prosecutor for arresting innocent people and keeping them in prison for more than six months. A serious injustice was committed as part of the repression aimed at breaking the building of a democratically organised community,” said the organisation.

Speaking to Maverick Citizen, New Frame editor in chief Richard Pithouse said “The fact that three young men, who had played a leading role in building a remarkable experiment in collective social organisation, had to endure more than six months in our horrific prisons is an outrage. However, it is not an isolated outrage.

“In Durban, local ANC structures are often characterised by outright gangsterism and criminality and this, together with the co-option of many police officers by local political actors, is a profound threat to the prospects for democratic organisation on the part of impoverished people. There needs to be a swift, independent and rigorous investigation into this matter”

Pithouse has researched and written extensively on the struggles of Abahlali base Mjondolo including a research paper titled ‘Abahlali baseMjondolo and struggle for the city in Durban, South Africa’

Outside Durban Magistrate’s Court, members of Abahlali baseMjondolo sang songs of struggle and voiced their support for the freed men. Mnguni, Tshazi and Ngila thanked everyone who had come out to support them and told the crowd “ninga khathazeki kakhulu, bayekeni bajabule, isikhathi senu sokuthi nijabule siyeza, nina khalani nje manje kodwa eku gcineni iskhathi senu siyeza,” which translates to “do not despair, let them [ANC] rejoice for now, your time to rejoice is coming, you may be crying now but in the end, you too will rejoice.” DM/MC